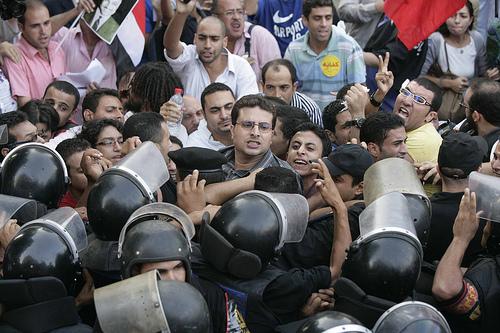 The Obama administration's calls for an orderly transition and managed reform are out of sync with the democratic aspirations of Egypt's protesters.
By Asli Bali, Aziz Rana | February 4, 2011 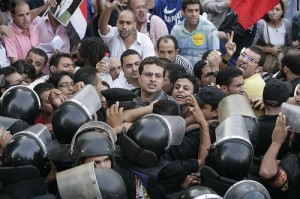 As the Mubarak regime turns to violence in a vain attempt to repress the peaceful protests that have swept Egypt’s streets for over ten days, the risks associated with current U.S. strategy for Egypt and the wider region continue to grow. In its response to the events, the Obama administration has subtly shifted its message, incrementally increasing pressure on the regime over the last week. But the more important story is the remarkable continuities reflected in the administration’s approach.

Indeed, Washington’s response has departed little from its original script. This script involves repeatedly invoking the language of “moderation” and order and stability. Such language defends a wait-and-see approach and encourages protesters to accept incremental reforms in place of the peaceful democratic revolution that ordinary Egyptians have created and, against all odds, sustained. The call for orderly transition and managed reform is, in fact, a call for more of the same.

This approach – including any U.S. backed effort to remove Mubarak while retaining the larger regime through the new Vice President Omar Suleiman – is no longer viable. Nor is a belated demand for an end to violence sufficient. A definitive break from the scripts of stability and moderation and a reorientation of American policy toward Egypt –and the broader region – around the democratic aspirations of protesters is the only way forward.

Resort to the language of order, stability, incrementalism, and moderation is hardly new and existed well before the events of last week. Not only is it consistent with the basic stance that the Obama administration has taken toward the Middle East from the very outset, but it reflects the long trajectory of American practices in the region, which have depended on shoring up Arab authoritarians who are willing to serve in an American “axis of moderation.” The members of this axis — Saudi Arabia, Egypt, Tunisia, Jordan — have displayed little in common other than a commitment to sustaining current U.S. foreign policy priorities – on Israel/Palestine, the containment of Iran, and access to oil. What they pointedly do not share is any tangible commitment to actual moderation – understood as an internal project of democratization or political openness. This latter fact has been powerfully exposed by the nonviolent demonstrations across the region, and, as in the case of Egypt, the increasingly brutal response such protest has elicited from “moderate” allies.

At the heart of American support for such autocrats is a false opposition between chaos and order, with many in Washington arguing that the only way to avoid pervasive regional violence is to maintain the status quo. But rather than calling for stasis, the United States now has a chance both to vindicate its rhetoric of democracy and in the process to produce a more lasting and stable regional peace. The events of the recent weeks underscore that long-term stability can neither be provided from the outside nor afforded to regimes that are best characterized by their willingness to advance Western preferences at the expense of repressing the preferences of their own citizens. If U.S. interests lie with a stable regional order, such a goal actually requires realigning American goals with those of local players deemed legitimate by their own people. This might mean building strategies around allies that cannot always be counted on to toe an American line.

This shift would require abandoning a vision of Pax-Americana. But it would nonetheless produce a region better able to serve as a partner over the coming decades. In other words, democracy for the Middle East need not be thought of as incompatible with order and synonymous with extremist violence. Rather, a region of democratic regimes that enjoy domestic legitimacy is likely the only viable method of ensuring that governments do not replay a continuous cycle of repression, entrenchment, and collapse.

If it fails to alter course, the Obama administration may well finally and irrevocably deplete its credibility in the region. For a decade local democracy advocates in the Middle East have called for change and hoped for Western support – only to be disappointed. On the rare occasion where support for democracy yielded free and fair elections – as in the Palestinian elections of 2006 – those outcomes were repudiated and replaced with punitive strategies, as exemplified by the blockade on Gaza. More often the language of democracy has been coupled with orchestrated exercises that returned reliable American clients to power. These dual tactics left many democracy activists on the ground suspicious of U.S. intentions and lent support to the view that the United States opposed local democratic demands.

To date Western responses to events in Egypt have been depressingly familiar. The leaders of France, Germany, and the United Kingdom took the unusual step of issuing a joint statement last weekend, but substantively it was nothing other than business as usual. Congratulating Mubarak on his “moderating influence” in the region, Prime Minister David Cameron, President Nicolas Sarkozy, and Chancellor Angela Merkel urged him “to show the same moderation in addressing the current situation in Egypt.” Messages from Europe this week have continued this theme, calling for reforms by the Mubarak regime rather than recognizing the legitimate demands of Egyptians for regime change.

Similarly, the message from President Obama on Tuesday focused on underscoring “orderly transition,” an apparent endorsement of Mubarak’s strategy to remain in office until September. In Mubarak’s February 1 address, he disparaged pro-democracy protesters while simultaneously posing the alternatives between his continued role and their demands as a choice between chaos and stability. President Obama stated in his address later that same evening that he had spoken to Mubarak and communicated to him the call for order and transition. The common themes underlying the President’s preferred approach and Mubarak’s own framing – chaos versus order – reflects a disturbing convergence around a blinkered vision for Egypt.

The emphasis on “orderly” or managed transition in Obama’s speech suggests coded language for a strategy of keeping Mubarak in office until a medium-term alternative can be identified. If events in the streets of Egypt demand a faster pace of change, an alternative shorter-term strategy of “transition” may yet emerge. Wednesday’s violence and the Obama administration’s response suggest that the United States might bow to the inevitability of a near-term exit for Mubarak. Yet such an exit may well be managed through U.S. coordination with Mubarak and his inner circle to produce another “orderly” process that maintains the regime – for instance, through Suleiman – until September or beyond. If the Obama administration supports either of these strategies of regime maintenance in the short- or medium-term – the U.S. approach will increasingly diverge from the demands of ordinary citizens for democracy.

Although both Mubarak and Obama have framed the issue as chaos versus order, the protesters in Egypt have shown the falseness of this dichotomy by being peaceful, nonviolent, and orderly, even to the point of organizing spontaneous neighborhood watches to secure their homes and national treasures like the Egyptian museum. They have acted in line with the basic political commitments purportedly favored by the West: freedom, human rights, and democracy.

By contrast, the regime that Western leaders have lauded for decades as a beacon of moderation has unleashed its salaried, plainclothes security personnel to loot its own cities, set fire to its streets, and attack unarmed protesters with Molotov cocktails, knives, U.S.-supplied tear gas canisters, and live ammunition. The new Vice President Suleiman now promises to employ the same security services to arrest those the regime chooses to blame for the disorder and violence it has wrought.

Providing Mubarak, or his regime, with an additional eight months to crush domestic opponents, hand- select a successor that will hew to existing policies – in line with Western preferences – and orchestrate another round of Egypt’s notorious elections is no formula for peace or stability. Such a U.S. strategy, in coordination with the Egyptian regime, would be a renewed license for Mubarak (or his vice president) to sow the very forms of violence and repression with which the regime has long been identified. Calling for “all sides” to act with moderation, maintaining supposed “neutrality” between unarmed peaceful protesters and a regime using U.S.-supplied materiel to threaten and attack its people is understood across the region as choosing the side of Mubarak. Nor is the belated request that the regime desist from violence sufficient, absent a clear and unequivocal expression of support for the core demands of the protesters: an immediate end to the Mubarak regime (not limited to the departure of Mubarak), constitutional reform, and the convening of free and fair parliamentary and presidential elections.

Supporting the demands of the Egyptian people, rather than an “orderly transition” managed by a fatally compromised Egyptian regime, will require Washington to enter into unchartered territory in its Middle East policies. The United States will have to redefine stability in terms that embrace local concerns with democratic legitimacy. As a consequence, Western leaders must recognize that the alternatives presented by events in Egypt are not solely a region of adversaries or clients. There is also the possibility of a region with its own internal priorities and resources, one that can be engaged with rather than dictated to.

The following weeks will provide a profound opportunity to reset the U.S. and European approach. Perhaps the high rhetoric of Barack Obama’s Cairo speech may yet be redeemed. If not, events in Cairo and beyond will represent the death knell of the president’s promise of a better posture for the United States in the Middle East and the wider Muslim world. It will make clear that for all the talk of freedom and moderation, the United States seems willing to jettison both at the slightest turn of events.

Asli Bali, Aziz Rana Asli Bâli is acting professor of law at UCLA School of Law and an editor at Middle East Report and Aziz Rana is assistant professor of law at Cornell Law and author of The Two Faces of American Freedom out now from Harvard University Press. They are contributors to Foreign Policy In Focus.