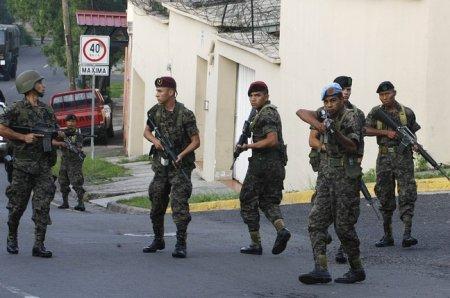 The Honduran military not only ousted a president. It has militarized society by elbowing aside the police.
By Austin Robles | July 10, 2012 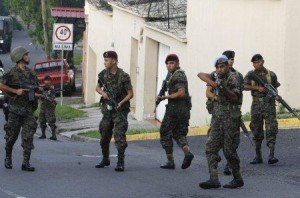 Shortly before midnight on May 26, 15-year old Ebed Haziel Yánez Cáceres left his home on his father’s motorcycle. As he drove through the country’s capital city, three members of the Honduran Armed Forces signaled the minor to pull over. When Ebed Haziel did not comply, the military troops opened fire, killing him instantly.

Human rights organizations expressed their outrage over the incident, and, in a rare show of accountability, a sergeant was sent to prison in late June for his participation in the killing. Still, showing accountability for human rights abuses should not trump preventing them from happening in the first place. Placing the military on the streets and authorizing them to pull people over jeopardizes civic security by creating conditions in which abuses such as these are more likely to take place than if law enforcement agencies carried out the policing role

Recognizing this blurring of military and policing roles, a Honduran human rights group, the Committee of Families of the Detained and Disappeared in Honduras (COFADEH), filed suit with the Supreme Court on June 30 against the government’s use of military troops in a policing position. The organization argues that the government violated the constitution by granting the armed forces powers to stop, search, and arrest citizens, a right previously reserved for civilian police. The Honduran Congress voted to reverse legal precedent in November 2011 by accepting a new interpretation of Article 274 of the constitution, which enumerates the powers of the armed forces. This congressional interpretation expanded the military’s support role into one of active law enforcement. Though purported to be a temporary strategy during a state of emergency, the law was extended for a third time on June 26.

Historically, Honduras suffered from the militarization of civilian roles, but it made significant progress in separating military and civilian power in the 1980s and 1990s. These hard-earned reforms are now being rolled back, and heavy U.S. support is helping to blur the lines between the military and police under the pretext of promoting national security.

Police agencies are normally trained to exercise restraint in the use of deadly force, which is only employed as a last resort. The objective of military troops, however, is to wage and win wars through the use of overwhelming lethal force against an enemy. These two security forces serve vastly different purposes, and the United States codified their separate responsibilities in law in 1878 with the passage of the Posse Comitatus Act.

Passed during Reconstruction, when federal troops were perceived as exceeding their authority while occupying Confederate states, this law distinguishes the role of law enforcement agencies from that of the military, and for good reason. They are clearly trained for different purposes — one to protect and the other to kill. Accordingly, the inclusion of the latter in the former’s operations proved to have negative consequences for civilians.

Rather than teach the lessons it learned in its own history, the United States promoted the use of the military in civilian policing abroad. Instead of using armed forces to defend national sovereignty against outside threats, beginning in the 1960s, the United States instructed Latin American countries to employ troops against their own citizens to achieve “internal security.”

Risks and Setbacks in Honduras

Around the same time, the Honduran military started transforming itself into a professional institution. The military graduated its first class in 1960, executed its first coup three years later, and ruled almost exclusively for the next quarter-century. In 1986, the first peaceful military-to-civilian transfer of power took place, and that same year Congress voted to separate the military from the police. Over the next decade, further steps were taken to place the military under civilian control, including transferring the police from military to civilian authority, creating a skilled investigative body, and strengthening the attorney general’s office.

These reforms prevented breaks in the democratic order and provided greater civic security until June 28, 2009, when the military overthrew then-President Manuel Zelaya in a coup. Although the Supreme Court issued a warrant for President Zelaya’s arrest, the military ignored its orders and acted on its own by dragging him out of his house in the middle of the night and exiling him to Costa Rica. No military officer was ever punished for these acts.

Since then, Honduran leaders have announced “states of siege” and passed emergency decrees that returned the military to a larger public role. Reports of human rights abuses and killings soared, with Hondurans filing more than 10,000 official complaints of abuses by the military and police since June 2009. One year after the coup, Honduras made international headlines by sustaining the world’s highest homicide rate and by becoming the world’s most dangerous country for journalists. The United States, instead of refusing to prop up a repressive regime, began pumping aid to the government and its military.

Current President Porfirio Lobo contends that the Honduran police force is unable to handle the security crisis confronting the country and is using the military in a policing role to achieve stability. However, military troops are not trained to respect human rights or to engage in stops, searches, or arrests. Rather than substantively strengthen its police force, President Lobo is requesting that the United Nations train the military in policing functions. It seems counterintuitive to make such a request: reforming the police force should be the first priority, not transforming the military into a police agency.

In Honduras, as in the rest of Latin America, the U.S.-supported use of the military in civilian roles leads to an increase in human rights abuses, as spotlighted in May when a DEA-backed raid killed four civilians. It is also unproductive because the threat posed to Honduran society by organized crime is better handled by investigative and enforcement bodies rather than military forces. Honduras needs to dismantle criminal and drug-trafficking organizations, a feat that won’t be accomplished through brute force. Still, Honduras and the United States seem to be overlooking the lessons they each learned through their own experiences.