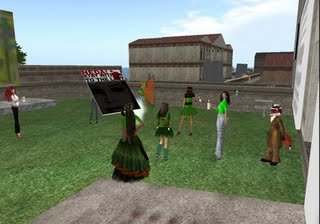 Protests continue in a virtual world where security police and censors are unable to tread.
By Max Burns, John Feffer | August 27, 2009 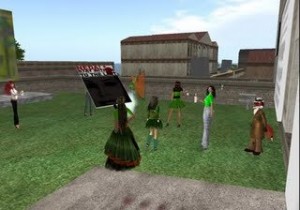 On July 22, a week into Iran’s foreign media reporting ban, a group of Iranian protesters gathered on a grassy hill to speak out against Supreme Leader Khamenei’s continued support for Mahmoud Ahmadinejad. Some wore black T-shirts with a blood-spattered slogan: “Where Is My VOTE?” By midday, the protest had attracted several hundred attendees. One woman arrived wearing little more than a thong swimsuit and a pair of purple angel wings.

Iran’s security forces, however, were absent. In a nation with a frighteningly effective intelligence service, Supreme Leader Khamenei was entirely unaware of this protest because it took place in cyberspace. The protesters were concerned citizens from dozens of countries who logged into a synthetic world called Second Life, where millions of users worldwide share one virtual landscape. The protest, planned several days before, traveled around the world by way of virtual word-of-mouth. Those who wanted to voice outrage only needed Internet access.

Second Life is one of many synthetic worlds, places that exist only on computers, where users create avatars — virtual representations of themselves — and interact with users worldwide as easily as if they were in a single room. The technology behind Second Life makes its synthetic world flexible enough to fit any interest. There are thousands of unique worlds-in-miniature in Second Life, all created by individual users who pay Linden Lab, the company behind Second Life, for the privilege of creation.

One of the most active Iranian protest and discussion worlds is Club Habibi, described as a “Middle Eastern Oasis” where avatars can purchase region-themed clothing and command their characters to dance a virtual version of an Arab belly dance. Over 9,200 avatars pass through Club Habibi every hour. Some merely explore for a few minutes and fly off, while others meet up with virtual friends from places as far-flung as Damascus and Denver. Unsurprisingly, conversation often leads to Iran’s electoral problems, where real-life Iranians can express themselves and carry their message beyond the locked-down borders of Khamenei’s temporal dominion.

While places like Club Habibi provide a free virtual forum for Iranians to spread their message, other Second Life venues provide a more somber experience. Hundreds of Second Life players captured international media attention as early as June 25 after announcing plans for a “Virtual Vigil” in memory of anti-Ahmadinejad protesters killed by Iranian security forces. The vigil, which lasted nearly two hours, relied entirely on word-of-mouth to sustain the flow of virtual candle-holding mourners.

The active Iranian protest community in Second Life is more than a curiosity, and downplaying the importance of virtual societies in our political and social lives, as Time magazine did in August 2007, understates the power of synthetic worlds in creating viable social movements. In her feature piece “Second Life’s Real-World Problems,” Kristina Dell portrays Second Life as little more than a den of “low traffic and raunchy behavior,” and predicts its limited utility as a commercial sphere. Second Life’s ability to serve as a virtual base for political speech proves this view shortsighted and cynical.

As economist Ted Castronova notes in his groundbreaking work Exodus to the Virtual World, these synthetic spaces present legitimate forums for expression and speech that may be impossible in the user’s real-world community, while at the same time giving a single user an unprecedented audience with whom to converse.

Authoritarian governments that repress real-world demonstrations have difficulty doing the same in the synthetic world. Virtual rallies are so hard to shut off because the mechanics of virtual protest are fluid. Squeeze one part of the tube and, like a massive balloon, the momentum simply transfers to another segment. Unlike actual rallies, there is no centralized base that can be “raided” by security forces, and virtual participants are likely to notice sudden changes in the activity levels of prominent activists.

Indeed, the efforts of real-world governments to restrict the Internet usage of virtual protesters appears to strengthen the rallies as the online community responds to what it views as an offense against expression. So, for instance, Second Life’s virtual protests continued — and even increased in scale — after real-world Iranians started to mysteriously disappear from the synthetic world.

Much like the popularity of file-sharing services, virtual protests are limited only by the waning interest of participants. However, when multiple forms of expressive media combine — international television coverage, print media reports, and synthetic world organization — media attention becomes self-reinforcing. For instance, on July 24, CNN’s iReport featured a user-submitted story on Second Life’s Iranian freedom rally that garnered so much support from Internet users it was ultimately featured during CNN’s on-air broadcast. This exposure then fueled further virtual interest in the protests. As an increasing number of Second Life users logged on to hold candles and signs, mainstream media sources approached the rally as a legitimate news topic. Thus the cycle continued.

The media coverage of Second Life’s virtual Iranian protests also had the unintended effect of drawing a coalition of real-world human rights groups into the virtual fray. United 4 Iran, a group of human rights groups including Human Rights Watch and Physicians for Human Rights, held a fundraiser entirely in Second Life that solicited donations by way of “United4Iran boxes” freely copied and placed throughout the synthetic world by users. The donation boxes collected nearly 215,000 Linden Dollars, Second Life’s virtual currency that is freely exchangeable for real-world currencies. When converted, that $800 will maintain United4Iran’s virtual humanitarian presence for over a year.

If protests like those in support of Iran’s democratic movement gain credibility as legitimate forms of protest — which, by all rights, they are — the potential for a paradigm shift in dissent speech is fast approaching. The potential exists for a system where undemocratic governments are held accountable through cyberspace even after making domestic political dissent impossible and dangerous for real-world protesters.

Young, politically minded activists coming of age in today’s computerized world will find less and less trouble circumventing government censors through rudimentary routers and proxy systems. This offers the possibility of a world where cyberspace falls beyond the reach of all but the most repressive governments, creating a strong incentive for governments to keep access to cyberspace open. After all, not even Iran’s extremist government wants to be considered on par with reclusive North Korea.

The rise of virtual protest also means that mainstream media must begin paying closer attention to the goings-on of synthetic worlds like Second Life. The stereotype of online gamers as acne-ridden teenagers slaying virtual dragons is outmoded. In Second Life, a vibrant virtual community now views synthetic worlds not so much as walled off from reality but as a means to augment reality. Over the next several years, the level of virtual political activity will almost certainly rise in proportion to the growing number of people logging on and sharing opinions.

The virtual political activism in Second Life is not restricted to cases where real-world governments have barred physical protest. In a move that made front-page news in The Washington Post, every major candidate in France’s highly contested 2007 presidential election opened a Second Life campaign office. Hundreds of avatars from around the world gathered at the campaign office of Jean-Marie Le Pen, a far-right nationalist with a history of extremist views, to protest his virtual presence. No more than two days into Le Pen’s virtual residency, protesters grew so angry that they stormed Le Pen’s Second Life office and forced its removal to an isolated corner of the synthetic world.

The scale of French virtual activism is noteworthy because, unlike Iran, France is a mature democracy with strong institutional and cultural support for free expression. Despite many opportunities for unhindered real-world protest, French Second Life users turned to the synthetic world for much the same reason France’s political candidates did: Second Life provides another forum for expression and debate.

Synthetic worlds can be a strong and sustained force for good. Even now, months after Iran’s suspect election, a million digital protestors unafraid of Iran’s notorious prisons defy the security patrols on the streets of Tehran and continue to speak out for justice.

Max Burns, John FefferMax Burns is an international projects lobbyist with a private consulting firm in Washington, D.C. and a contributor to Foreign Policy In Focus. He has worked on foreign affairs in the United States Congress and as a staff writer for The Asia Chronicle. You can find more of Max's work on his blog, Pixels and Policy; he can be reached at PixelPolicy [at] gmail [dot] com.