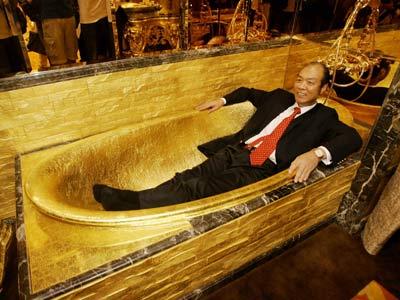 The golden lap of luxury 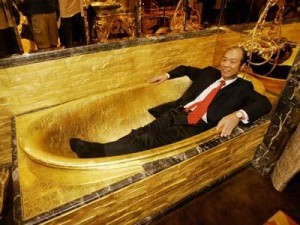 The golden lap of luxury

In September of this year, the price of gold reached a record high, breaking $1,900 per ounce for the first time in history. This unprecedented spike in gold prices has come in the midst of the U.S. debt crisis and the financial turmoil sweeping over Europe. Although prices have tempered since then, hovering around $1,650 per ounce in October, the overall price of gold has more than quintupled over the past decade.

The rising uncertainty of today’s economic climate has only intensified the allure to invest in this precious metal, which, unlike the dollar and the euro, has a value that is not tied to sovereign debt or hobbled economies, making it a safer investment. That’s why recent boosts in gold prices will likely fan the already raging flames of today’s gold rush, which began when the value of gold first shot up in the early 2000s.

The Gold Rush and Its Discontents

The ramifications of such high prices have not been seen on Wall Street alone.They have been felt by governments and communities around the world that are confronted by the growing onslaught of transnational gold-mining corporations. Throughout the past decade,mining conglomerates have raced to explore and exploit the world’s gold deposits as quickly and cheaply as possible, trying to capitalize on the high price of gold while they can.

In Latin America, a region replete with untapped mineral wealth, the number of transnational mining corporations has skyrocketed since 2000, mirroring the rising price of gold. With profit as the ultimate priority, mining corporations have flocked to mineral-rich developing nations and taken all they can — leaving behind a trail of infertile land, cyanide-laced water, and broken communities.

The outrage from affected mining communities — which have been stripped of their lands, health, and natural resources — has led to organized protests and a growing anti-mining movement throughout the region. From Peru’s Puno province—which saw the shutdown of the Bear Creek Mining Project in June—to Cabañas, El Salvador—where locals struggled successfully to shut down the El Dorado gold mine—communities are organizing and fighting back.

Yet notwithstanding broad opposition from local communities, growing anti-mining sentiment, and some governments’ newfound resolve to enforce stricter environmental and social standards, mining corporations have refused to back down. Instead, they have looked to free trade agreements (FTAs) and bilateral investment treaties (BITs) to sue governments in international tribunals if they are denied access to national resources. For example, in 2009, Pacific Rim Cayman, a mining corporation headquartered in Canada, sued the Salvadoran government under the Dominican Republic-Central American Free Trade Agreement (CAFTA-DR) for $77 million when it was refused a permit to begin extraction in the El Dorado mine.

Although the Pacific Rim case against El Salvador is still in progress, other corporations have won millions of dollars using similar tactics. In March 2010, the oil giant Chevron won over $700 million in a suit against Ecuador. This case and Pacific Rim’s case against El Salvador are just two examples of a growing trend in which transnational corporations use FTAs and BITs to suppress governments, bypass local courts, and undermine the democratic process in developing countries.

Lawsuits brought by corporations under FTAs and BITs represent huge economic costs for governments no matter the outcome. In another case filed against El Salvador, this one by Commerce Group (Commerce Group v. El Salvador), the Salvadoran government won—as Commerce Group had already filed a case in Salvadoran courts and thus did not have recourse to an international tribunal—but was still forced to pay $800,000 in legal fees. As such, governments must pay whether the tribunal decides in their favor or not, creating a lose-lose situation, especially for developing countries that already have tight budgets. Consequently, being subject to international investment rules, the governments of mineral-rich countries must think twice before implementing environmentally or socially responsible laws for fear of being sued by corporations that may feel their economic interests have been threatened. With the power to bypass national courts, corporations leavenations at the mercy of international tribunals where affected communities are not stakeholders.

Investment treaties such as FTAs and BITs give transnational companies the power to disregard national democratic processes. Although these breaches of national sovereignty have been met with a resolute and organized local resistance, international tribunals have failed to uphold the human and environmental rights of threatened communities and desperate governments. As these uncertain financial times further push up the value of precious commodities like gold, the stakes have never been higher, and these battles over the right to natural resources and national sovereignty will only increase.

Ed. Note: For more information about how local communities are organizing to resist multinational mining companies, check out IPS Director John Cavanagh’s piece in the Nation.