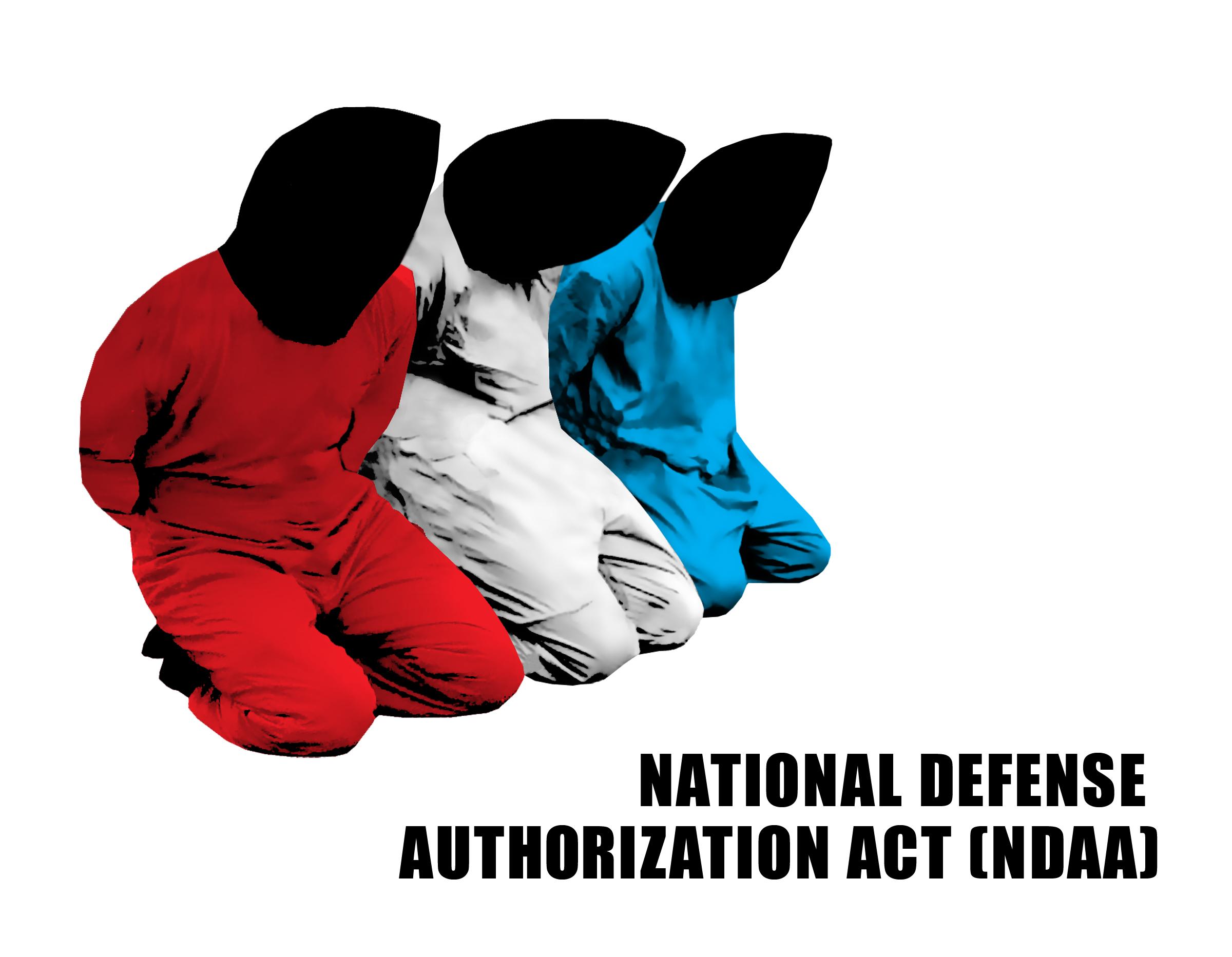 The NDAA and the Militarization of America

The NDAA will only provide more legal cover for the executive branch to further undermine habeas corpus.
By Carl Mirra | February 10, 2012 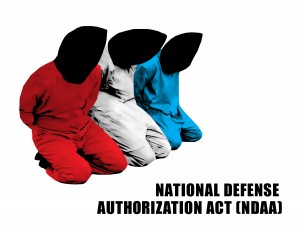 The National Defense Authorization Act of 2012 (NDAA) was passed by Congress and signed into law by the president on New Year’s Eve of 2011. Activists and other critics charge that the NDAA authorizes the indefinite military detention of U.S. citizens, but supporters counter that the law entails no new powers of detention for the federal government.

In a sense, both sides are right. Insofar as it affirms “existing law” as the basis for federal detention policy, the NDAA does not itself dramatically expand the government’s power to detain U.S. citizens indefinitely. The bad news, however, is the government has essentially already claimed this authority, and the NDAA will only provide more legal cover for the executive branch to further undermine habeas corpus.

Nothing in this section shall be construed to affect the existing law or authorities relating to the detention of United States citizens, lawful resident aliens of the United States, or any other persons who are captured or arrested in the United States.

But critics, including former federal judges Abner Mikva, William Sessions, and John Gibbons, are equally vigorous in their disagreement. The NDAA, they write, “codifies methods such as indefinite detention without charge and mandatory military detention and make[s] them applicable to virtually anyone…including U.S. citizens.”

Senator Lindsey Graham is one of the few supporters of the NDAA to plainly admit that “the statement of authority to detain does apply to American citizens, and it designates the world as the battlefield, including the homeland.”

Indeed, section 1021 (e) was added after the voting down of an amendment by Senator Mark Udall (D-NM), which would have made it clear that Americans were not subject to detention. As many critics noted, Congress could have stated something to the effect that, “Nothing in this act shall be construed as authorizing the indefinite detention of U.S. citizens.” It did not. That a clear statement to protect U.S. citizens was defeated in favor of a contested one strongly suggests that the NDAA does not offer safeguards for citizens.

There was, in other words, an opportunity to clear up this mess, but instead Congress left the door open for the indefinite detention of citizens.

For this reason, President Obama expressed “serious reservations” regarding the NDAA. He assured Americans in a signing statement that “my administration will interpret section 1021” in a way that “complies with the Constitution.” However, the president did not say that NDAA protects American citizens, but only that he will “interpret” it as such. As the noted law professor Jonathan Turley explains, the president does not deny that he has the authority to detain citizens – only that he will not exercise it.

Even the president, then, admits that the “existing law” provision in 1021 (e) is subject to interpretation, rendering it vague to the point of being meaningless. Existing law is, at best, under dispute with respect to the detention of U.S. citizens. The president has, after all, already asserted his authority not only to detain citizens without trial, but to assassinate them as well.

Senator Carl Levin (D-MI), who drafted the NDAA, disclosed in a floor statement that the “existing law” clause in section 1021 (e) fails to insulate citizens from detention without charge. “It makes clear what we have been saying,” he said, that the bill does “not affect existing law relative to the right of the executive branch to capture and detain a citizen …We think the law is clear in Hamdi that there is no bar to this nation holding one of its own citizens as an enemy combatant.”

It would be more accurate to say that although the Supreme Court has yet to fully resolve this issue, the NDAA ensures that future detentions will face fewer obstacles in the Court. A Congressional Research Service study into the matter concludes that the “plurality” of Supreme Court decisions “affirm the President’s powers to detain ‘enemy combatants,’ including those who are U.S. citizens, as part of the necessary force authorized by Congress.”

The executive branch has repeatedly asserted the authority under “existing law” to indefinitely detain prisoners. Consider the Obama administration’s assertion in its March 2009 Guantanamo Bay Detainee Litigation filing. It unequivocally maintains that “under the AUMF [Authorization for the Use of Military Force], the President has the authority to detain persons…that the President determines planned, authorized, committed, or aided the terrorist attacks that occurred on September 11.”

This authority was nothing new as it follows the AUMF. What was new, however, was the administration’s insistence that “The President also has the authority to detain persons who were part of, or substantially supported Taliban or al-Qaida forces or associated forces.”

Had the administration limited that definition to the Guantanamo cases as originally stated, the matter would have at least been somewhat contained. But Congress has now appropriated this language as the “definitional framework” for covered persons in NDAA section 1021. It states:

b) COVERED PERSONS – a covered person under this section is any

(1) A person who planned, authorized, committed, or aided the terrorist attacks that occurred on September 11, 2001, or harbored those responsible for the attack.

(2) A person who was part of or substantially supported al-Qaeda, the Taliban, or associated forces that are engaged in hostilities against the United States or its coalition partners, including any person who has committed a belligerent act…

Of special concern is the administration’s contention that “it is not possible” to define the “precise nature and degree of substantial support, or the precise characteristics of associated forces.” Since these undefined categories are now, verbatim, part of the NDAA, it opens the door for the indefinite detention of a category of people the government is unable to define. To suggest that these undefined categories cannot be applied to U.S. citizens is at best naïve.

Consider the case of Ali Saleh Kahlah al-Marri, a legal resident alien who was arrested in Illinois in 2001. Two administrations claimed the authority to indefinitely detain al-Marri without charge. Al-Marri did not see a judge for eight years, and did so only after a challenge against the president’s assertion of unchecked authority by the Brennan Center for Justice at New York University. As a result of intense pressure and to avoid any possibility that the Supreme Court would rule against it, the government allowed Al-Marri to be tried in a civilian court.

The point here is that it took eight years of legal battles to simply get a trial, and the government ensured that “existing law” would not set any precedent to prevent indefinite detention. That is, the administration’s decision to allow Al-Marri to arrange a plea deal made certain that an earlier Fourth Circuit ruling that “empower[s] the President to detain [Al-Marri] as an enemy combatant” would not be overturned. Thus, this case leaves the executive power to detain unchallenged.

The Congressional Research Service provides additional examples of how the government employs “existing law” to uphold the detention of U.S. citizens without charge. Examples include the Supreme Court cases of Ex Parte Quirin and In Re Territo, which similarly sustain the indefinite detention of citizens (and non-citizens).

Of course, one can cite recent cases that uphold habeas rights for detainees. But in each case, Congress and the executive countered with provisions to undermine those decisions, a pattern that will be continued with the passage of the NDAA.

In 2004’s Rasul v. Bush, for example, the Court ruled in favor of habeas. In response, Congress passed the Detainee Treatment Act of 2005, which eroded many of the protections nominally provided under Rasul. Something similar occurred in Hamdan v. Rumsfeld in 2006, when the Court supported the right of detainees to be heard by a neutral commission. Congress subsequently passed the Military Commissions Act (MCA) of 2006, which denied detainees the opportunity to challenge their confinement.

The most salutary development occurred in 2008’s Boumediene v. Bush, which upheld detainees’ rights to habeas corpus. At minimum, the NDAA expressly threatens that ruling for non-citizens. Worse yet, the Court of Appeals for the District of Columbia has failed to approve a habeas filing for over a year and a half.

Consider Al Maqaleh v. Gates, a case in which the executive argued that the Boumediene ruling should be limited to Guantanamo suspects. In other words, it wished to deny basic constitutional guarantees to detainees outside that limited setting; notably, the United States has moved hundreds of detainees to the infamous Bagram facility in Afghanistan and is attempting to deny them due process. The appeals court, overturning a district court ruling, did indeed refuse habeas rights to these detainees. Even Boumediene, the most promising ruling protecting due process, is under challenge. As Yale Law Professor Owen Fiss bemoans, “What is remarkable and disturbing is that today Obama denies habeas is available for the prisoners of Bagram, just as Bush denied it was available for the Guantanamo prisoners.”

We have already seen how Hamdi v. Rumsfeld permitted the indefinite detention of an American citizen, albeit with some qualification. But this case presents another difficulty. The Supreme Court ruled that the AUMF, affirmed and strengthened by the NDAA, overrules even the Non-Detention Act of 1971, which Hamdi’s defense evoked as protection against indefinite detention. On this matter, the Supreme Court is crystal clear:

The court expressed doubt as to Hamdi’s argument that §4001(a), which provides that [n]o citizen shall be imprisoned or otherwise detained by the United States except pursuant to an Act of Congress, required express congressional authorization of detentions of this sort. But it held that, in any event, such authorization was found in the post-September 11 Authorization for Use of Military Force.

A well-intentioned bill currently under consideration in the House Committee on Foreign Affairs would repeal section 1021, but this is insufficient. The NDAA still specifically states, “Congress affirms the authority of the President…pursuant to the Authorization for the Use of Military Force.” To put this matter to rest once and for all, Congress should support the repeal of Section 1021 of the NDAA and strengthen the Non-Detention Act by passing the Due Process Guarantee Act, which is currently being considered by a Homeland Security subcommittee.

Of course, even this is inadequate, as the United States continues to detain scores of non-citizens improperly. Detainment without charge – of citizens and non-citizens alike – erodes centuries of once-strong democratic foundations. Congress must act immediately to end it.

Carl MirraCarl Mirra is an associate professor of social studies education at Adelphi University and a contributor to Foreign Policy In Focus. He is a Marine veteran who served during the first Gulf Wa, and the author of Soldiers and Citizens: An Oral History of Operation Iraqi Freedom.