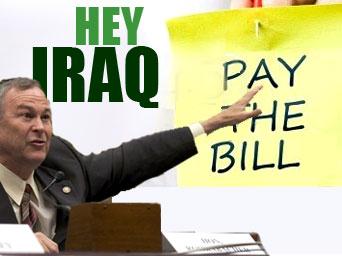 The Ongoing Costs of the Iraq War 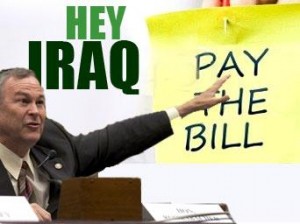 When you destroy someone’s property, you usually have to pay compensation. The United States is responsible for much of the destruction that has taken place in Iraq since the 2003 invasion. But instead of offering compensation to the Iraqis, Congressman Dana Rohrabacher (R-CA) has demanded that the Iraqi government pay the United States compensation in dollars for the cost of U.S.-led war. The Iraqi response was to kick Rohrabacher out of Baghdad.

While the United States focuses on its budget problems and the costs of the war, it is important to remember the price that Iraq and Iraqis have paid. It’s not just the hundreds of thousands who have died during and after the war. There are millions of refugees. The country’s infrastructure has been ruined. Corruption is flourishing.

And for all this destruction, Iraqis have received very little in the way of compensation.

According to the International Rescue Committee, the war has displaced 4.7 million Iraqis because of the destruction of their homes and the waves of violence and persecution. Close to half of these refugees are living in poverty in neighboring countries. They face an uncertain future and may never be able to go back to their homes. This refugee crisis represents the largest and fastest growing humanitarian crises of our time.

Among these unsettled refugees are people who worked side by side with the Americans. Out of the 4.7 million displaced civilians, the State Department has admitted only a little more than 58,000 Iraqi refugees to the United States. This figure pales in comparison to the number of refugees admitted from other countries during similar crises. During the Cold War, for instance, the United States admitted 900,000 refugees from Vietnam and 600,000 Jews from the Soviet Union.

For Iraqis still living inside the country, violence and hardship have become part of daily life. Now that U.S. diplomats are setting the groundwork to pull out troops, terrorist attacks are threatening the fragile security of this nation. Attacks in July killed and injured dozens of people, and these attacks have continued into August.

But it’s not only the people who have paid for this ongoing war. The land itself has borne a share of the cost as well.

Iraq is still dealing with unresolved problems with basic services. According to the UN Environment Program, Iraq faces severe pollution and environmental problems so alarming that an immediate assessment and cleanup plan are needed urgently. Nearly half of Iraqis do not have reliable access to safe drinking water, and widespread water shortages have resulted from drought and inadequate management of resources. Except for Baghdad, electricity is limited to three to six hours daily. There has been a dramatic increase in the number of babies born with birth defects since the start of war. The unemployment rate is 15 percent, with certain regions reaching almost 30 percent.

Since the start of the war in 2003, Iraqi cultural institutions and archaeological sites have also suffered tremendously, with the ransacking of museums and the pilfering of thousands of items. This destruction and theft dealt a harsh blow to collections that chronicled some 7,000 years of civilization in Mesopotamia. Still today, 3-7,000 pieces remain missing.

The defenders of the war have argued that Iraqi citizens have gained democracy. But this democracy has been deeply flawed. Although the Iraqi people look to their new government to improve their living conditions and the security of their country, deep-seated corruption has complicated the democratic process. After the parliamentary elections in March 2010, Iraqis had to wait at least nine months for the formation of government. In February, thousands protested in the streets of Baghdad against the corruption and incompetence of the Maliki government.

Iraq has long been a crucial country in the Middle East. And now all the surrounding countries are helping themselves to a share of this rich country. Once a terrorist-free zone under Saddam Hussein, Iraq is now host to a flourishing al-Qaeda. U.S. forces failed to protect Iraqi civilians. The United States has failed to stabilize the country. And if the United States withdraws troops only to ignore Iraq, the country will fail in the future as well.

The U.S. government is now focusing on its own debt issue. Much of that debt has come from military expenditures and the war in Iraq. The United States has spent more than $7.6 trillion on defense and homeland security since 9/11, while the total costs of the war in Iraq will reach $797.3 billion by the end of the current fiscal year on September 30, 2011.

In comparison, this year, USAID plans to spend only $63 million in total humanitarian assistance for Iraq.

In order to prevent a failed state in Iraq or a state that remains completely dependent on its U.S. backer, the United States must clean up the mess that it made. Washington should cut military spending and use a small portion of that money to help Iraqis rebuild their country, assist uprooted citizens in returning home, and create a transparent and democratic political system. Many of the losses that Iraq has suffered cannot be compensated. But the United States must still try to make things right. And that means, despite what Dana Rohrabacher has demanded, that Washington, not Baghdad, pay the Pottery Barn bill for damages incurred.

Fatima Al-zeheri Fatima Al-zeheri, a contributor to Foreign Policy In Focus, is the president of the U.S.-Iraqi Youth organization at Arizona State University.