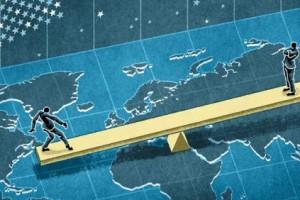 The Paradoxes of the Pacific Pivot

The U.S. needs to come up with a new and different Pacific pivot that places peace and prosperity on the Korean peninsula at the top of the list of priorities.
By John Feffer | April 12, 2013

The “Pacific pivot” of the United States is nothing new. At the same time, it doesn’t really exist. And yet, even though it doesn’t exist, this pivot is partly responsible for the escalation of tensions in and around the Korean peninsula.

How can all three of these statements be simultaneously true? Such are the paradoxes of the U.S. shift in attention toward the Pacific Rim.

The Obama administration made a big splash with its announcement of a rebalancing of U.S. foreign policy. But it is in fact something that the Clinton administration also boasted about back in the 1990s. In 1993, Bill Clinton hosted the Leaders Summit of the Asia-Pacific Economic Cooperation (APEC) forum in Seattle as part of his own administration’s shift toward the Pacific. With APEC and other initiatives, the United States wanted to cash in on the enormous economic growth taking place in a region where, as Clinton put it, countries have “gone from being dominoes to dynamos.”

The George W. Bush administration went off on a different trajectory with its single-minded focus on the “global war on terror” and regime change in the Middle East. Many were the critics of the Bush administration’s neglect of the region and its “outsourcing” of Asia policy to China. But Bush was too preoccupied with trying to remake the Middle East – and then dealing with the inevitable negative consequences – to pay more than a modicum of attention to points East.

The Obama administration has revived the old Clinton dream of rebranding the United States as a Pacific power. But there are two reasons why this new pivot doesn’t really exist except at a rhetorical level.

During the 1990s, the Clinton administration was successful in turning around the U.S. economy, at least in terms of shrinking deficits, encouraging impressive economic growth, reducing unemployment, and improving median wages. In other words, the United States was in a good position to take advantage of cooperation with Asian economies.

Today, by contrast, the U.S. economy is in difficult straits. Unemployment remains high, and growth anemic. Projected budget cuts may well send the economy into a downward spiral. The Obama administration bills the Trans-Pacific Partnership (TPP) as a vehicle for growing its members’ economies. But the reality may well be closer to the North American Free Trade Agreement (NAFTA), which only contributed to the hollowing out of the U.S. manufacturing sector as companies fled south and north of the border.

The most buzz about the Pacific pivot, however, has been on national security. Having presided over military fiascos in the Middle East and Central Asia, the Pentagon is planning a move to calmer waters. Former Pentagon head Leon Panetta announced, for instance, that the United States would devote 60 percent of its naval warships to the region, up from 50 percent.

But that’s about it, actually. There will be some rearrangement of existing U.S. forces in Asia, with some Marines heading to Australia and an expansion of facilities on Guam. But this shell game of “strategic realignment” is largely an effort to reduce the U.S. military footprint on Okinawa, again something promised a while ago by Bill Clinton.

And the promised bump up of U.S. capabilities in the region will probably, because of U.S. budget cuts, turn out to be a reduction. Panetta predicted that sequestration would leave the United States with the smallest ground forces since 1940, a fleet of fewer than 230 ships, and the smallest tactical fighter force in the history of the U.S. Air Force. With sequestration now a reality, new Pentagon head Chuck Hagel is telling the Pentagon to get ready for serious belt-tightening.

The Pentagon has nevertheless insisted that the pivot is happening and recently sent a new class of combat ships to Singapore as proof. But if you believe that the “Pacific pivot” will mean a larger U.S. footprint in the region, think again.

So, the much vaunted rebalancing of U.S. foreign and military policy is nothing new, and because of budget cuts, it doesn’t really exist. How then could something that is not new and not real have an impact?

With its new policy approach, the Obama administration has obviously felt the need to respond to critics that it was ignoring the growing threats of China and North Korea. The Pacific pivot was designed to strengthen relations with U.S. allies like South Korea and the Philippines, improve ties with China-skeptical countries like Vietnam and Burma, and remind both Beijing and Pyongyang of Washington’s interests in the region.

Even if this rebalancing is largely rhetorical, it has put both countries on edge. China is already engaged in serious military budget increases. U.S. commitment to missile defense systems in the region, because they threaten to eliminate China’s deterrent capability, will only encourage Beijing to spend more on more offensive systems. And North Korea has an even more precarious nuclear arsenal that U.S. missile defense could render non-functional.

Washington, of course, insists that its military presence in the Pacific is strictly defensive. The Obama administration has emphasized that the Pacific pivot is really about stronger economic, diplomatic, and cultural engagement with the region.

But that’s not how Pyongyang views the situation. It sees the Pacific pivot as a prelude to an attack, however much the Pentagon denies such plans (and however much such a plan would contradict the Pentagon’s risk-averse nature). Washington sees in Pyongyang a regime that has broken every agreement that it has signed. But Pyongyang sees it the other way around, that the United States never built the light-water reactors promised in the Agreed Framework, never followed up with serious economic engagement, never worked toward diplomatic recognition, and never reduced in any way the huge array of weapons pointing in North Korea’s direction. When Washington assures Pyongyang that it has no intention of launching a preemptive strike, Pyongyang can’t get images of Serbia, Iraq, and Libya out of its mind.

There’s still time for the United States to make a pivot on its pivot. Instead of emphasizing the military components of this reorientation of U.S. foreign policy, Washington could turn around and say to North Korea, “Okay, let’s talk.” Pyongyang has demonstrably muted its actions and rhetoric when it has been in negotiations, whether bilateral or multilateral, so talks are the obvious way out of the current crisis. With a new leader in Seoul who has shown at least some commitment to reengaging the North, the United States needs to come up with a new and different Pacific pivot that places peace and prosperity on the Korean peninsula at the top of the list of priorities.

John FefferJohn Feffer is an Open Society Fellow. He is on leave from his position as co-director of Foreign Policy In Focus.