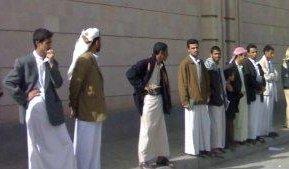 The Problems of Partnering with Yemen

Only with a more credible Yemeni government can the West effectively counter al-Qaeda on the Arabian Peninsula.
By Peter Bouckaert, Christoph Wilcke | April 7, 2010

The March capture in San`a of a New Jersey man with alleged ties to al-Qaeda has renewed public concern over potential threats of terrorism from Yemen. On March 14 and 15, Yemen’s air force again carried out airstrikes against what the government said were terrorist hideouts in Abyan province, in the south of the country. But as in other countries where terrorist organizations coexist with corrupt and repressive central governments and home-grown insurgencies, the fight against terrorism in Yemen is fraught with the pitfalls that come with a rampant disregard for human rights.

A year ago, the Saudi and Yemeni al-Qaeda branches merged into al-Qaeda in the Arabian Peninsula. This group has carried out several spectacular attacks, at home and abroad, over the past nine months. Last August, it wounded Saudi Arabia’s chief counterterrorism official in an assassination attempt, and in November it killed several top Yemeni security officials. Then the group claimed responsibility for the failed plot to blow up a U.S. airliner over Detroit on Christmas Day.

The United States and other countries trying to combat this group should tread carefully when relying on Yemen’s government to do the heavy lifting. An exclusively military counter-terrorism focus using airstrikes may alienate local allies, as in Afghanistan. One lesson in counterterrorism from Afghanistan and Pakistan is that armed militant groups thrive when the government does not enjoy the support of its people.

President Barack Obama’s pledge to “strengthen our partnership with the Yemeni government” shouldn’t lead to a Western embrace of President Ali Abdullah Saleh’s government. The United States and other outside powers also need to address Saleh’s terrible human rights abuses, which help fuel al-Qaeda recruitment. In southern Yemen, for instance, the government has responded to massive and largely peaceful protests in favor of secession with unprovoked deadly gunfire on numerous occasions.

Al-Qaeda has openly tried to capitalize on southerners’ growing anger by declaring its support for their struggle against the “infidel” government. Mounting civilian casualties in the fight against al-Qaeda, along with excessive use of force in the south and indiscriminate attacks against armed rebels in the north, are grist for al-Qaeda’s publicity mill.

To date, the international community seems to be giving Yemen a free hand to deal with internal opposition under the cover of combating terrorism. The hastily convened Yemen meeting in London in January declared a “commitment to non-interference in Yemen’s internal affairs.” In a March 3 visit to Yemen, U.S. Assistant Secretary of State for Near Eastern Affairs Jeffrey Feltman said that Washington “consider[s] what is happening in the southern provinces to be an internal affair, for Yemen alone, and we do not believe that any outside party should intervene.” That same day, Yemeni Deputy Prime Minister Rashad al-Alimi admitted to parliament that a U.S.-assisted airstrike in December 2009 against al-Qaeda, also in the southern Abyan province, killed 42 civilians.

Repression and lawlessness partly account for Yemen’s worsening instability and for al-Qaeda’s rise. The government has made Yemen a dangerous place for journalists. On January 4 — less than 48 hours after Obama pledged his support — Saleh’s security forces opened fire on protesters demanding the re-opening of Yemen’s largest independent newspaper, Al-Ayyam, which was shut in May 2008 for “inciteful” reports on government abuses against southern protestors. On March 11, government forces entered the offices of two large regional satellite television channels, Al Jazeera and al-Arabiyya, and confiscated their broadcasting equipment in response to their coverage of southern unrest that the government said “encouraged sabotage and separatism.”

A professor at Aden University, Husain ‘Aqil, was sentenced to three years in prison on March 28 for his opinion articles in newspapers lamenting corruption at the highest levels of government. Similarly, Yemen’s state security court on March 28 handed a former south Yemeni ambassador, Muhammad ‘Askar Jubran, five years in prison for undermining Yemen’s unity in his writings and speeches.

Yemeni authorities are equally harsh with critics of its civil war in the north with the Huthi rebels. Days after the London meeting, Yemeni officials presented in a state security court Muhammad al-Maqalih, an opposition journalist abducted bysecurity agents in September on the streets of the capital, because he had leveled accusations of war crimes against the military in its war against the Huthi rebels. He was held incommunicado until his release on health and humanitarian grounds on March 24.

A Human Rights Watch investigation into the fighting in the north uncovered credible allegations of serious violations of the laws of war by both sides. The government has sealed off the conflict area, preventing humanitarian workers and journalists from going there.

Countless insurgencies in recent years have taught that governments fighting extremism with repression or guns almost invariably make matters worse. If the West wants Yemenis to support a campaign against al-Qaeda elements in their midst, it needs to address their legitimate grievances and aspirations, and prepare to take effective measures to avoid civilian casualties.

The Yemeni government has exploited Western support for counter-terrorism to suppress peaceful domestic opposition and combat armed rebels. Western leaders should publicly distance themselves from such behavior and make clear to Saleh that his government needs to turn a sharp corner in terms of its human rights practices. Only with a more credible Yemeni government that earns the support and respect of its people can the West achieve results against al-Qaeda’s franchise on the Arabian Peninsula.