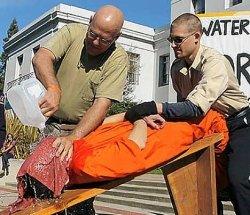 The Return of Waterboarding?

Presidential candidates are praising it. Former administration officials are defending it. Will the United States backtrack on torture?
By Robert Pallitto | December 28, 2011

During the recent Republican presidential primary debates, three candidates said without hesitation that they would authorize waterboarding as an interrogation technique if elected president. In their recent memoirs, both George W. Bush and Dick Cheney admitted with evident pride that they had approved the technique.

This defense and approval of waterboarding has been voiced despite President Obama’s establishment of a standard for interrogations that would prohibit coercive interrogation techniques altogether. It’s worth asking why we find ourselves in the midst of this debate once again.

Waterboarding involves strapping a person to a stretcher, tying on a blindfold, and placing a wet cloth over the nose and mouth. It is impossible to breathe during this process, and the point is to induce the sensation of drowning. “Water torture” is not new. It was used a century ago against Filipino prisoners in the Spanish-American War. In fact, there is a famous photograph of U.S. soldiers applying the method, forcing water down the throat of a prisoner.

For nearly 30 years now, there have been clearly applicable legal provisions that would prohibit waterboarding. The UN Convention Against Torture (CAT) was signed in 1984 and became effective in 1987. A few years later, Congress passed a criminal statute prohibiting torture under U.S. domestic law. Both of these standards define torture to include “severe” mental or physical pain. Moreover, the U.S. Code provision specifically forbids the “threat of imminent death.” It would seem obvious beyond argument that a simulated drowning constitutes severe mental and physical pain and that it also amounts to a threat of imminent death. Thus, waterboarding violates the torture statute. However, contending with these legal constraints while aggressively prosecuting the “war on terror,” the Bush administration interpreted the “torture” definition in a strikingly narrow fashion. Assistant Attorney General (now federal appeals judge) Jay Bybee submitted his now-infamous memo to the White House in 2002 arguing that “severe” pain meant pain equivalent to “organ failure” and that short of this standard, state-inflicted pain would not constitute torture. In another memo that specifically evaluated waterboarding, Bybee advised that it does not produce lasting harm (relief is instantaneous when waterboarding stops, he said) and therefore does not constitute torture. The Bush Administration withdrew the Bybee memo in 2004 but did not specifically repudiate the practice of waterboarding.

In a 2009 executive order, President Obama announced that the new legal standard for interrogations would be the U.S. Army Field Manual (AFM). The Manual had been in use for decades in various iterations. The AFM prohibits all forms of threats and coercion in interrogations and, while it does not answer every question relative to prisoner treatment, it does represent an improvement over previous standards. Moreover, it unquestionably prohibits waterboarding.

Notwithstanding the current state of the law, waterboarding is still “on the table” for serious discussion by would-be national leaders. To be sure, these pro-waterboarding statements can be explained in part as political posturing . Tough-sounding rhetoric gets votes – especially among audiences who cheer for the death penalty , as some spectators did during a recent Republican primary debate. Moreover, Republican presidential hopefuls use every opportunity to differentiate themselves from the Obama administration. But since the United States has used waterboarding in the recent past, the discussion is anything but academic.

Future use of waterboarding would require a change in the law. The 2009 executive order setting the AFM as the standard for interrogations would have to be revoked and replaced. Additionally, the U.S. Code provision prohibiting torture would have to be amended. Though Bush administration lawyers urged an interpretation of the existing Code provision that permitted waterboarding, their position has been discredited. Thus, new statutory language would be needed.

However, a new president could effect this change by simply issuing an executive order. And an amendment to the U.S. Code is not difficult to envision given congressional ambivalence about state violence in the war on terror. The Military Commissions Act, for example, was passed in 2006 in response to the Supreme Court’s ruling that the commissions then in use were illegal. As part of its legal standards for future commissions, the MCA permits use of evidence obtained through torture. The more recent National Defense Authorization Act would permit seizure and indefinite detention of suspected terrorists. Meanwhile, the Obama administration recently targeted and killed a U.S. citizen terror suspect. Yet we maintain an official posture of steadfast opposition to torture.

This ambivalence about torture and other forms of state violence echoes across the centuries of U.S. history. In the case of water torture specifically, there was an outcry when news of torture in the Philippines reached the U.S. public a century ago. The Theodore Roosevelt administration tried, first, to deny that torture occurred there, then acknowledged and condemned it. However, the condemnation was couched in qualifications and excuses that sound strikingly familiar today: the enemy did far worse, soldiers were under stress, the incidents were isolated. But Roosevelt added a strange rhetorical twist. He called torture critics “hypocrites” because the lynchings rampant in the United States at the time were more common and widespread than torture in the Philippines. Significantly, Roosevelt did not take this opportunity to call for an end to lynching or to advocate passage of a federal anti-lynching law. He simply cited racialized violence in the United States to deflect criticism of racialized violence abroad. Our national political discourse has long been plagued by ambivalence about state violence, and we have learned little from our past.

There has been no clear or consistent progress in eliminating violent state practices in the United States. At best, we can say that there have been attempts, at times, to confront violent state practices. The adoption of the Eighth Amendment, the postwar investigation of the Confederate prison at Andersonville, the 1931 Wickersham Commission report on law enforcement, and the ratification of the CAT are a few important examples of coming to terms with state-enforced cruelty. But retreats outstrip advances. A new crisis (or a presidential election) often as not provokes a chorus of tough-sounding statements about interrogation or warfare. Understanding of the techniques urged is not required, nor are interpretations of law held to any standard of accuracy. And examples of this ritualized jingoistic exercise abound.

Well-reasoned, vocal dissent is a crucial counterforce when public officials (and would-be public officials) call for the use of violent tactics like waterboarding. Former FBI interrogation specialist Ali Soufan testified before the Senate in 2009 detailing his opposition to coercive interrogation on practical as well as moral grounds. He cited his own experience interviewing al-Qaeda members and explained that rapport with an interrogation subject is more likely to yield useful information than threats or violence. He also noted that in recent cases where waterboarding had been used, the most valuable information was gathered before waterboarding, not after.

As an evaluation of tactics by an experienced interrogation practitioner, Soufan’s statement was incontrovertible. As a statement of the importance of upholding the rule of law, it was compelling. In Soufan’s words, the choice of methods of counterintelligence interrogation “is not, and should not be, a partisan matter. We all share a commitment to using the best interrogation method possible that serves our national security interests and fits squarely within the framework of our nation’s principles.” Obvious as this call for agreement sounds, it has been drowned out by aggressive election-cycle rhetoric. Objections both practical and moral must be voiced repeatedly to ensure that the United States does not return to a course of action that has been proven ineffective, brutal, and wrong.

Robert PallittoRobert Pallitto is an associate professor of political science at Seton Hall University, a former trial attorney, and a contributor to Foreign Policy In Focus. He is the editor of Torture and State Violence in the United States (2011).