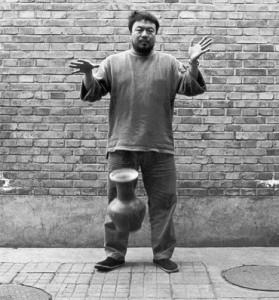 The Silver Lining in China’s Crackdown

Beijing's recent crackdown on human rights has revealed the importance of a new group of activists.
By Vivian Yang | June 22, 2011

It has been more than two months since Chinese artist Ai Weiwei disappeared. The son of famous poet Ai Qing, Ai Weiwei is well known for his architecture, curating, photography, film, and social criticism. After his collaboration with the architects Herzog and de Meuron on Beijing’s Olympic stadium, his fame spread. Outspoken and liberal, Ai has long been an advocate for democracy. He stated that he had no interest in the 2008 Olympics and would not attend the opening ceremony: “an Olympics held without freedom and against the will of the people will be nonsense because no totalitarian regime can play at being democracy. It is a pretend harmony and happiness.”

In 2009, the first anniversary of China’s Wenchuan earthquake, Ai made a documentary of children killed in the earthquake in an attempt to help keep alive the issue of why so many schools collapsed. The Chinese government intended to play down the shoddy school buildings and focused instead on how the People’s Liberation Army saved lives. Determined to reveal the truth, Ai made public what the government wanted to hide. Besides his provocative arts, Ai also wrote extensively about his liberal political views on his blog and on Twitter.

Because of this explicit criticism, the Chinese government and the Communist Party (CCP) have long targeted Ai. His fame kept him from potential arrest, until April 4, 2011, when Chinese authorities detained Ai in Beijing and later held him on economic charges. The Incidental Art Festival in Beijing devoted an empty wall as a tribute to Ai. On June 3, the authorities shutdown the exhibition and brought the curators in for questioning.

What is intriguing is the timing of Mr. Ai’s arrest. He has been politically active for many years, yet it was until 2011 that he got arrested. Several reasons explain the timing. Alarmed by democratic revolutions in the Arab world, Beijing is deploying pre-emptive tactics to prevent a Chinese Jasmine Revolution, according to China scholar Minxin Pei, who also points to China’s impending leadership succession in 2012 as a factor. Prospective leaders tend to be harsh toward political dissidents. Besides, CCP leaders were wary of the 22nd anniversary of the 1989 Tiananmen massacre on June 4, knowing that the more prominent dissidents inside the jail, the more peaceful that day would be.

There is, however, a broader reason for the CCP repression other than these convergent contingent events. According to China scholar Susan Shirk, two decades of economic reform and opening to the world have transformed Chinese society radically and created latent political challenges to communist rule. Thus, communist leaders have a deep sense of domestic insecurity. Determined to hold onto power, the CCP is taking on individuals with liberal political views, including senior political dissidents, human rights lawyers, and Christians.

In recent years, the CCP has jailed or “disappeared” several high-profile human rights defenders. Gao Zhisheng, a famous human rights lawyer, has suffered from “enforced disappearance” and possible torture for the past two years. Li Zhuang, a well-known criminal defense lawyer currently serving an 18-month sentence in prison for fake testimony, was charged again with fabricating testimony in favor of his client (though the case was dropped unexpectedly). According to Chinese Human Rights Defenders, dozens of activists have been taken into police custody or placed under house arrest. China’s current human rights conditions stand in stark contrast to its booming economy.

The Emergence of Human Rights Lawyers

Depressing as China’s human rights situation may seem, there is a silver lining to this dismal cloud. The crackdown reveals just how far Chinese legal reform and civil society have progressed. Among those jailed or suffering from “enforced disappearances,” a distinct group is fighting for human rights within the legal frame — China’s human rights lawyers. They defend the civil and political rights of Chinese citizens. Only after the CCP arrests them do we begin to notice these emerging human rights defenders. In 2005, the Hong Kong-based publication Yazhou Zhoukan (Asia Week) named Chinese human rights lawyers “People of the year”, praising their effort to “use the constitution to protect citizen rights and to push through democratic and legal reform.”

Human rights lawyers actively use legal institutions and other platforms to challenge China’s authoritarian system. Albeit small, this group of Chinese human rights lawyers has a pivotal position to promote China’s human rights in everyday legal practice. Unlike political dissidents who voice their dissatisfaction directly, human rights lawyers protect and help improve human rights through the practice of law. Criminal defense lawyers, brought to attention through the sentencing of Li Zhuang, play a crucial part in defending and protecting civil and political rights in China. They hold important positions in bar associations and many have previous work experience in high-level agencies of the Chinese legal system, according to Sida Liu and Terence Halliday in a forthcoming article in Law & Society Review. They seek to use their high political status to generate change from within the legal system.

Prominent legal activists tend to be more confrontational when defending civil and political rights. Traumatized by experiences such as the Cultural Revolution and the 1989 Tiananmen Massacre, they are determined to check the arbitrary power of the state. For instance, when asked why he became a human rights lawyer during an interview, Guo Guoting said: “Initially it was a sense of justice, a natural response after witnessing unfairness. Later I begin to realize what missions Chinese lawyers shoulder. I believe that Chinese lawyers should take the responsibility of pushing for political reform and basic human rights protection. That is why human rights lawyers are what the Chinese citizens need the most.” This group resorts to defending politically sensitive cases to obtain attention and support from international media, foreign donors, and human rights organizations.

These defenders make particular use of the Internet to voice their opinions. In 2008, a small group of public interest lawyers in Beijing launched a campaign to democratize the Beijing Lawyers Association (BLA), which was controlled by the Ministry of Justice and Judicial Bureau. Thirty-five lawyers published an Internet appeal calling for “democratic and direct election of the BLA.” Their efforts paid off when the BLA began to hold direct elections. Unlike progressive elites who take a more or less pragmatic approach to improving human rights and the rule of law from within, these prominent lawyers are blunt and are thus prone to repression and retaliation.

In contrast, grassroots activists — local human rights lawyers — receive little media attention. They, however, have the greatest potential to bring about changes in China. For one, they are relatively large in number, a hundred or so and growing, and strive to reform the legal system through everyday practice. Lacking personal connections, they resort to media coverage and civil society. Because grassroots activists are less blunt, and thus have a smaller chance of getting arrested, their fight for human rights can proceed continuously.

What Can the United States Do?

Both the U.S. government and NGOs such as the U.S.-China Human Rights Dialogue and Amnesty International have contributed to improving China’s human rights. Human rights have always been a heated issue between the two governments, with China repressing dissidents and the United States championing them. Thus, bettering Chinese human rights practices is in a sense to alleviate frictions in U.S.-China relations.

The U.S. government should continue the U.S.-China Human Rights Dialogue. Despite criticism of the effectiveness of the dialogue, engagement is much more constructive than isolation or sanctions. Contrary to this criticism, the U.S. government should perpetuate its engagement policy, as manifested by the dialogue, because the Chinese government does care about soft power and clearly knows that the repression of human rights activists will tarnish its global image and offset its “charm offensive.” Thus, the CCP’s need to enhance its global legitimacy provides room for human rights discussion between the two governments.

The greatest impact that the United States has on China is how it acts itself. According to an interview with Kenneth Lieberthal, a China expert at the Brookings Institute, we should not ignore the power of example. How the United States conducts its political system is widely viewed in China. It will be nearly impossible for the United States to exert soft power on China if human rights in the United States are flawed. So far, despite President Obama’s commitment to increasing U.S. soft power, China still finds the U.S. performance wanting. For instance, China has accused the United States of severe violation of civil and political rights, citing police brutality and torturing suspects to receiving confessions. It also criticized U.S. double standards on Internet freedom by requesting unrestricted “Internet freedom” in other countries while imposing restrictions on its own cyberspace. To act as a model for the Chinese government, the U.S. government needs to improve its human rights.

Missing from this pressure campaign is one logical group of people: U.S. lawyers. According to Professor Jerome A. Cohen, many international law firms and individual lawyers benefit from the world’s spectacular growth in trade, technology transfer and investment transactions with China. But efforts to arouse interest among U.S. law firms involved with China have fallen on deaf ears.

To be truly effective, U.S.-based NGOs can help facilitate education on the rule of law and specific legal procedures so that ordinary Chinese, when faced with government repression, will know how to use the legal system to protect their rights. Despite the weaknesses of the Chinese legal system, repeated use of it will help institutionalize the rule of law. NGOs should also put more resources into grassroots mobilization, including providing assistance in support of Chinese human rights lawyers. They can collaborate with Chinese NGOs to protect grassroots human rights lawyers and offer suggestions for legal reforms. China Human Rights Lawyers Concern Group, a well-respected NGO based in Hong Kong, has been devoted to supporting and advocating for the release of human rights lawyers. Also, foreign NGOs could encourage Chinese civil society groups to focus on reducing Internet censorship and enforced disappearances. Free Ai Weiwei, a website created after the artist’s arrest, is inspiring but needs a larger platform to make itself known to the outside world.

The current Chinese legal system seems rather hostile toward human rights lawyers, treating them as anomalies. For instance, criminal defense lawyer Wang Haiyun said: “during a case, many will criticize me, ‘why do you defend for corrupt officials?’ ‘Why do you listen only to the statement of the defendant, instead of believing the truthful investigation from the judiciary, procuracy, and the police?'” Therefore, it is crucial to change the values of average Chinese through education and mobilization. If everyday Chinese come around to liberal political views, it would help promote the legal practice of human rights lawyers.

Despite the recent crackdown, the efforts of Chinese human rights lawyers, and grassroots activists in particular, have been substantial. China is a large country with complicated economics and politics; changes in the political system and improvement in human rights have to be incremental. Human rights defenders can’t change the system in just a few years. Nevertheless, continuous everyday legal practice will eventually lead to the institutionalization of citizen rights, when Ai Weiwei can practice both his art and his politics without fear of imprisonment.