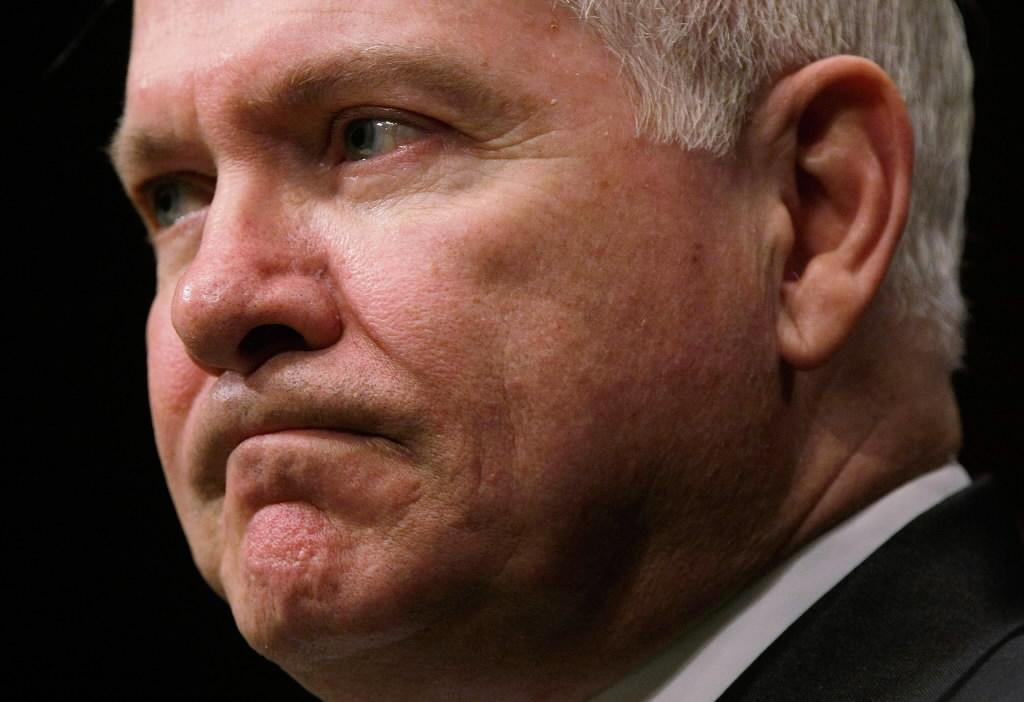 The World According to Robert Gates

What will be the legacy of Robert Gates: trimming Pentagon bloat or holding the line against deeper cuts?
By Keith Menconi | July 1, 2011 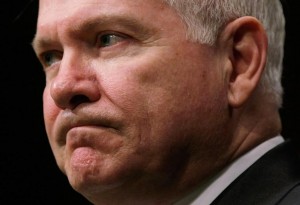 Calls for deep cuts in the federal deficit have returned the military budget–now more than twice the 2001 budget even before counting the wars in Iraq and Afghanistan–to the fiscal chopping block for the first time in ten years. In response, former Secretary of Defense Robert Gates spent his last months in office stiffening his rhetorical defense of the Pentagon budget. His discourse reveals both the distance we have come in recent years in eliminating Pentagon inefficiencies and excesses, and the numerous dangers threatening American security around the world.

At first blush, this reactionary tone may seem surprising coming from the same man who went to bat in 2009 for a defense budget that some hawks criticized as inadequate. At the time, Gates responded “The budget just submitted by President Obama for FY 2010 was $534 billion. Even after factoring inflation, and some of the war costs that were moved from supplemental appropriations, President Obama’s defense request represents a modest but real increase over the last Bush budget….Only in the parallel universe that is Washington, D.C., would that be considered ‘gutting’ defense.”

However, Gates has characterized more recent calls from the President’s Deficit Reduction Commission for a much deeper cut in the military budget, which would amount to about 10 percent of annual expenditures, as potentially “catastrophic.” According to Gates, even the president’s more modest proposal, which calls for a reduction of $400 billion in the planned national security expenditures over 12 years, would “require real cuts…and, as a result, real choices.” If we are to take Gates’ rhetoric at face value, we have passed the point of slimming down overhead, and are now cutting actual security tools: “a smaller military, no matter how superb, will be able to go fewer places and be able to do fewer things.”

Although the rhetoric has gotten more charged in response to this year’s less-than-supportive budget environment, this warning fits the general narrative that Gates has used to describe the last two years of military reform and modernization. In broad strokes, that narrative involves a Pentagon which enjoyed a “gusher” of funding in the post-911 era that has led to surging costs and a defense infrastructure with a “Lack of bureaucratic priority.” In response to this lack of priority, the narrative continues, Gates has led the charge in bringing the bureaucracy and procurement process back under control by cancelling underperforming weapons programs and by cutting out layers of redundant Pentagon leadership. In addition, Gates has set a new priority on fighting the sorts of nonconventional wars the U.S. is involved in currently rather than preparing for potential conventional wars.

This shift has led to the demise of many weapons programs–like the hyper-advanced F-22 fighter jet –and the money has been reallocated to support counterinsurgency operations. By his final policy speech in May 2011, Gates had the credibility to assert that having saved $300 billion from scrapped weapons programs, “the proverbial ‘low hanging fruit’ – those weapons and other programs considered most questionable – have not only been plucked, they have been stomped on and crushed.” According to Gates, with the excesses and inefficiencies all but gone from the military apparatus, if the United States wishes to achieve deficit reduction through military cuts it must “[accept] additional risk in exchange for reduced investment in its military.”

Since 2009, Gates has gone from defending smaller-than-expected increases to the defense budget to warning against, in the strongest of terms, meaningful cuts that would lead to real reductions in the military expenditures. This is not exactly a dramatic turn around. Instead, it reflects a consistent strategy to defend the Pentagon budget from an indiscriminate, across-the-board drawdown in post-conflict years. The strategy behind this rhetoric is best explained by Gates himself:

Seeing the bleak fiscal outlook ahead, I have for the past two years sought to prepare our defense institutions – accustomed to the post 9/11 decade’s worth of “no questions asked” funding requests – for the inevitable flattening and eventual decrease of the defense budget. This entailed creating as much “head room” as possible under the existing defense top line to protect the size and fighting strength – the core capabilities – of the U.S. military.

With two wars in Iraq and Afghanistan slowly winding down, and with the partisan war in Congress over deficit reduction just beginning, this is the moment that Gates has been preparing for.

Gates consistently refers to the dangers of a cavalier post-conflict drawdown: “From the very first defense budget I submitted for President Bush in January 2007, I have warned against doing what America has done multiple times over the last 90 years by slashing defense spending after a major conflict.” In other words, dramatic cuts in the defense budget after conflict periods address short-term domestic issues but damage the force structure in the long term and send shockwaves of uncertainty through the Pentagon. From a military planning perspective, Gates prefers a controlled drawdown before the end of the conflict so that deficit-minded legislators have a weaker case to make during the post-conflict budget debates.

Gates noted the role that Congress plays in his strategic calculus: “[A]s a matter of principle and political reality, the Department of Defense cannot go to the America’s elected representatives and ask for increases each year unless we have done everything possible to make every dollar count.” Gates hopes that by demonstrating real reforms in the Defense Department, the Pentagon leadership can then take the lead in deficit reduction. Not only will the reductions be smaller in the long run, but they will be directed in more rational ways, making cuts that are informed by security concerns rather then cuts that, as Gates likes to put it, constitute nothing more than “a math and accounting exercise.” The Project on Defense Alternatives characterizes the Gates’ strategy as “something of a preemptive strike or ‘spoiling attack.'”

Regardless of his battle for efficiency reforms, Gates clearly had an interest in maintaining as many resources as possible for the military. As such, his assessments of the current state of the Defense bureaucracy should be examined critically. William Hartung, the director of the Arms and Security Project at the Center for International Policy, argues that in Gates’ final policy speech he “overstated his accomplishments in [efficiency reforms] while understating what needs to be done to get runaway military spending under control.”

However overblown his rhetoric, Gates’ central contention is entirely valid, and is supported by a broad base of military commentators: Any military budget reductions should be informed by an understanding of the international threats to U.S. security and the current defense tools to meet those threats. Hartung finds this common ground with Gates: “Gates ultimately acknowledged that the real driver of military spending should be what missions we think are necessary to defend the country and its basic interests. That’s where the debate needs to be joined.”

The Institute for Policy Studies helps produce the annual Unified Security Budget, which critically examines the gross imbalance in resources between military security apparatus and non-military security programs. In firm agreement with Hartung and Gates, this year’s publication asserts that “[i]n the realm of security spending, [the] big picture is: what is the right overall balance of resources allocated to the range of our security tools that will do the best job of keeping our country secure?” This debate–based on resources, capabilities, and a reasonable assessment of threats–is something that should be fostered and supported as the deficit battles put every government program under closer scrutiny.

Gates’ farewell speeches have made this debate more complicated. Although he asserts that reductions in defense spending necessarily bring with them reductions in national security, the Unified Security Budget has identified nearly $80 billion of military spending to support programs in 2012 that have very little to do with realistic security threats. By associating all budget cuts with security reductions, Gates may have constrained the scope of discourse on the budget issue and may have limited the politically feasible options left on the table.

The immediate future of the budget debate will be dominated by two emerging stories. The first, “a fundamental review of America’s missions, capabilities, and our role in a changing world,” was announced by President Obama on April 13. This review will help guide further cuts in the defense budget. Many observers doubt that the review will do any more than legitimize the force structure already in place minus a few politically expedient cuts. However, on paper, it offers a framework that could identify key tradeoffs and lead to the healthy debate that is needed.

The second news story with significant implications for the budget debate is Leon Panetta’s confirmation as secretary of defense, which passed the Senate by a 100-0 vote on June 21. As the director of the United States Office of Management and Budget during the Clinton administration, Panetta will likely handle the budget issue very differently from his predecessor. “Gates was sticking up for military spending, but Panetta, coming from [the Office of Management and Budget], is going to have a pretty sharp pencil,” argues one defense industry lobbyist. “So people are pretty nervous.”

So far, Panetta has not outlined a clear vision for budget reduction. During his confirmation hearing, he endorsed the President’s efforts to reduce the deficit, but demurred from making more detailed proposals until after the comprehensive review is completed.

He also downplayed concerns about what increased risks could immerge if further cuts were to be implemented: “If there was something that indicated from the comprehensive review that our military would be adversely impacted, I would share it with the president.” Until Panetta settles into his new job, and until the comprehensive review is completed, the future of military budget reduction remains unclear.

A budget warrior (to use the Wall Street Journal‘s characterization) is one thing, but what is needed most for America is a new vision for U.S. military’s role in the 21st century. Fundamental assumptions about U.S. security and about the apparatus that ensures that security must be reassessed.

Unfortunately, Gates’ efforts to prevent a hack-and-slash budget drawdown have increased the rhetorical stakes, muddied the water, and could complicate future reform efforts. If Panetta is to take a positive role in the emerging military budget reform effort, he must support a meaningful debate about roles and missions, and eschew the strategically motivated posturing of his predecessor.

Keith Menconi is currently an intern for Foreign Policy In Focus. He is a student at the University of California, Berkeley.