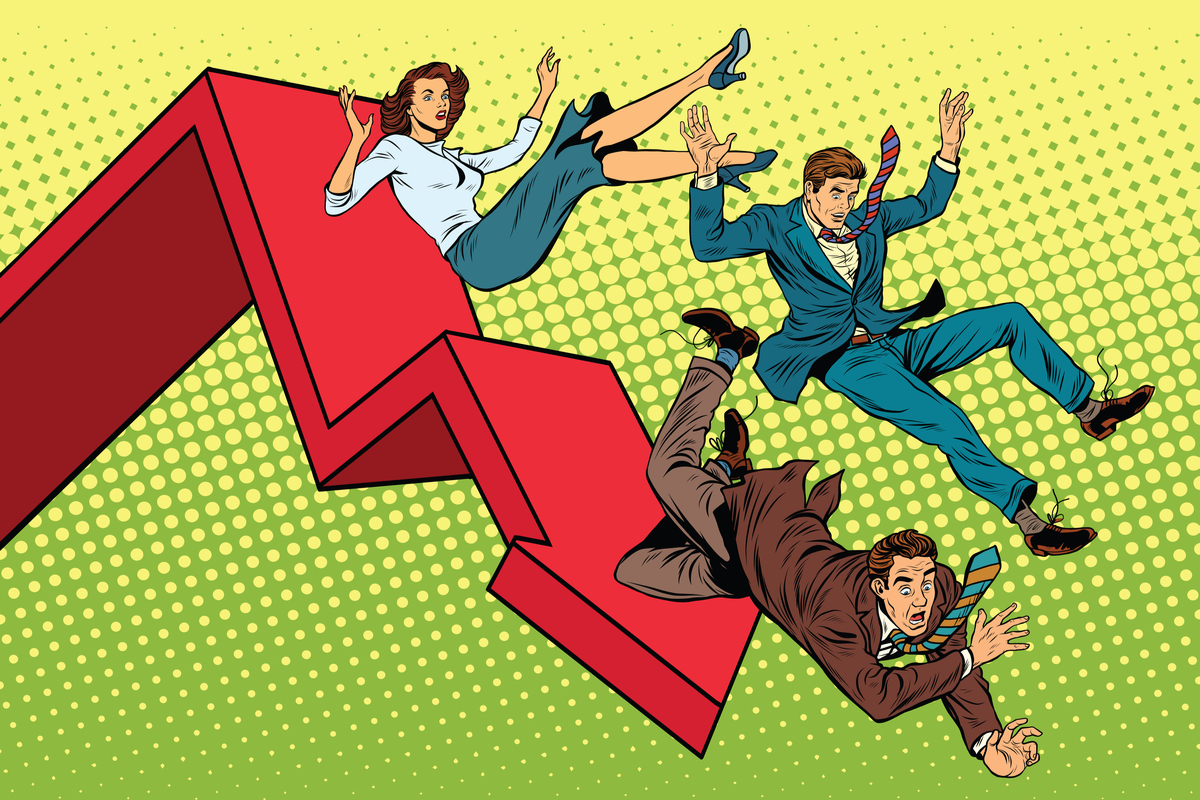 Donald Trump is the epitome of irrational exuberance.

You might remember that phrase from the 1990s. Alan Greenspan, the head of the Federal Reserve at the time, was describing how the tech boom was creating a bubble by generating enthusiasm way out of proportion to the actual value of the new companies.

Such an unwarranted economic boom was hardly something new, so it was easy to predict what would happen next. Periods of irrational exuberance — whether the dot-com expansion, Dutch tulipmania in the 17th century, or the housing bubble in America of the 2000s — have always led to a sudden crash and a serious hangover.

And now, here we go again.

Trump, always exuberant when talking about himself and his putative accomplishments, loves to boast about how well the American economy is chugging along. The stock market reached its all-time high at the end of August. In its second quarter this year, U.S. economic growth was 4.1 percent. Unemployment remains below 4 percent, and inflation remains moderate. Even wages are going up.

Irrationality enters the picture because there’s little if any connection between the president’s policies and the outcomes he lauds (since these trends began before he took office). Also, the prosperity that has resulted from this economic expansion has largely been enjoyed by the wealthier sectors of society. Finally, Trump’s economic fever dream is fueled by an enormous and growing amount of debt.

When it comes to irrational exuberance, it’s never if there will be a bust but when. On the tenth anniversary of the financial collapse of 2008, it’s worth looking at the potential pinpricks that will pop Trump’s hot-air balloon and send America crashing back to earth.

Let’s start at the top. It doesn’t take a math whiz to figure out that an expansion of military spending, an overall budget that’s as big as his predecessor’s, and a massive tax cut would produce an enormous budget deficit.

Although Trump promised to balance the books if he became president, he’s done the opposite. The deficit for this year will rise to $890 billion (it was about $660 billion when Obama left office). The shortfall in government expenditures will rise above $1 trillion next year.

Deficit spending makes sense during a recession. What Trump is doing now is essentially allowing the rich to siphon the cream off the top, providing the middle class with some skim milk, and leaving the sour dregs for everyone else. And unlike during earlier economic expansions, government revenues are actually falling, which is what small-government advocates are secretly cheering: less money, less government.

It’s not just the government that’s in hock. Total household debt reached a new high in August: $13.3 trillion. That includes a record amount of student debt ($1.5 trillion), an ever-growing amount of mortgage debt ($9 trillion, which is perilously close to the $10.5 trillion it reached during the mortgage crisis in 2008), and an overall credit card debt that just surpassed $1 trillion for the first time.

Then there’s corporate debt. Companies have taken advantage of low interest rates to borrow like crazy. This summer, corporate debt hit a new high of $6.3 trillion. Worse, the cash-to-debt ratio, which was 14 percent in 2008, has dropped to 12 percent: that’s $1 in cash for every $8 of debt.

Economists are quick to reassure the public that all of this debt is not catastrophic. After all, the economy is humming along. America doesn’t look like Greece.

But all this debt is like the termites eating away at the foundation of your house. You don’t see anything wrong except a bit of sawdust and the faint sounds of consumption. And then one day, you’re sitting at your kitchen table and, boom! You’re sprawled out in your basement with the wreckage of your house around you.

As long as institutions continue to extend credit, debt is manageable, not a crisis. In other words, if creditors are still willing to buy Treasury bonds, then the United States is good to go.

But that’s a big if.

Chestnuts in the Fire

Currently, the U.S. government owes $21 trillion, which is slightly more than the household and corporate debt combined. The owners of U.S. debt include federal agencies like Social Security (which currently runs a surplus that it uses to buy Treasury bonds), the Federal Reserve (which bought a lot of debt during the financial crisis to lower interest rates), mutual funds, and banks.

Foreign countries also hold about a third of the debt. China and Japan own a little more than a trillion dollars each, followed by Brazil, Ireland, the UK, and Switzerland.

In ordinary times, foreign ownership of U.S debt is uncontroversial. Countries with revenue surpluses need a safe place to park their money. And the United States has never defaulted on its sovereign debt, unlike Greece or Argentina.

But these are not ordinary times. With the sharp downturn in U.S.-Russian relations, Moscow decided this spring to unload 84 percent of its holdings of Treasury bonds. That amounts to about $87 billion, a considerable sum.

Russia, of course, is not one of the major holders of U.S. debt. But Russia’s not the only country in a selling mood. Japan got rid of $18.4 billion in Treasury bonds in the spring. In the first half of 2018, Turkey unloaded 42 percent of its holdings in U.S. debt. Both countries currently have trade disputes with Washington.

The big player, however, is China, and right now the Trump administration is escalating its trade war with China. Trump just announced tariffs on another $200 billion in Chinese imports after targeting $50 billion of goods in the first round. If China retaliates with more tariffs of its own, the Trump administration is threatening a third round sanctioning all Chinese imports. China’s counter-sanctions are smaller, since it doesn’t import as much from the United States.

But China could retaliate in other ways, such as devaluing its currency. A potentially more devastating action would be to follow Russia’s example and sell its stake in Treasury bonds.

Again, this wouldn’t necessarily have much effect on the U.S. economy as long as other buyers step in to take China’s place. And that’s when all that other debt comes into play. At a certain point, foreign creditors will no longer support unsustainable U.S. spending. They won’t pull the U.S. chestnuts out of the fire.

Here’s another sign that foreign confidence in the U.S. economy is waning. For much of the post-World War II era, international transactions have been conducted in dollars. That has meant that people — and countries — have wanted dollars. But that situation is changing. The U.S. dollar remains the currency of choice for transactions, but by an ever-diminishing margin. As of July, it was used in 39 percent of transactions. The euro was in second place at 35 percent. Further down the list came the pound, the yen, and the yuan. The fall of the dollar anticipates an eclipse of U.S. global economic hegemony.

It’s hard to predict when all of these indicators will converge. Hedge fund manager Ray Dalio expects a major economic downturn in the United States in two years, after the impact of the tax cuts disappears and the government finds itself short on money. He predicts that:

We have to sell a lot of Treasury bonds, and we as Americans will not be able to buy all those treasury bonds. The Federal Reserve will have to print more money to make up for the deficit, will have to monetize more, and that’ll cause a depreciation in the value of the dollar.

This will be no ordinary downturn. Irrational exuberance has pushed up stocks above their value, sent household and corporate debt into the stratosphere, and burdened the government with debt it will have greater difficulty covering. Interest rates remain low, so there’s no real option to lower rates to stimulate the economy. Martin Feldstein, former chairman of the White House Council of Economic Advisors, anticipates a $10 trillion drop in U.S. household assets. “When the next recession comes, it is going to be deeper and last longer than in the past,” he says.

The bottom line: the United States would finally turn into Greece.

The austerity programs Washington has supported all around the world will finally be visited upon the United States. And if the United States goes down, it will drag much of the global economy with it. After all, U.S. debt is only part of a larger problem. As Walden Bello explains:

Financial operators are racking up profits in a sea of liquidity provided by central banks, whose releasing of cheap money has resulted in the issuance of trillions of dollars of debt, pushing the level of debt globally to $325 trillion, more than three times the size of global GDP. There is a consensus among economists along the political spectrum that this debt build-up cannot go on indefinitely without inviting catastrophe.

The Trump administration, in addition to its irrational exuberance over the current economic expansion, is taking various steps to make matters worse. It is pushing for greater deregulation of the financial sector: rolling back elements of the Dodd-Frank bill, gutting the Consumer Financial Protection Bureau, and appointing top regulators who have close ties to Wall Street.

“Instead of draining the swamp,” quips Aaron Klein, policy director of the Center on Regulation and Markets at the Brookings Institute, “the Trump administration is telling the alligators…that the zookeepers are taking a nap.”

Economic inequality is not an unintended consequence of deregulation. It’s one of the goals. You might think that the administration simply wants to move as much money as it can to the 1 percent before the debt hits the fan. But here’s the really depressing part. The wealthy make out like bandits during an economic downturn as well.

As Colin Schultz explains at Smithsonian.com, the stock market did well after the last financial crisis:

Anyone whose finances survived the initial blast had a chance to regain ground in the recovery — or even profit. But families with net worths closer to the average often have a huge portion of their overall wealth invested in their houses. With the value of that gone, they had little wealth left to reinvest.

All that “creative destruction” you hear about when there’s a market “correction”?

Ultimately it’s just the sound of the rich getting richer and the poor getting poorer. The termites are having a feast. But they’re not dining out at mansions.