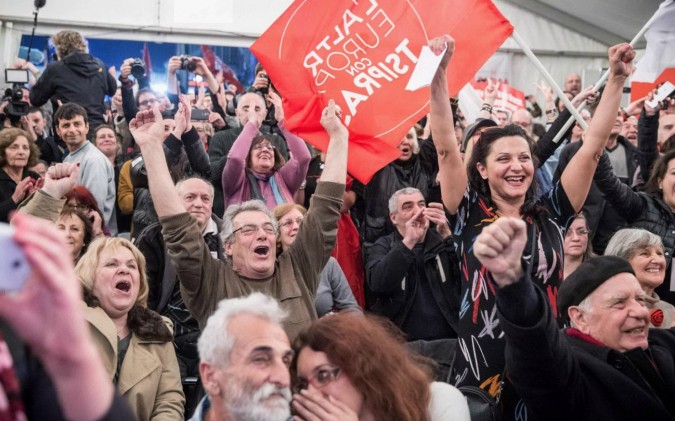 These Four Elections Could Decide the Future of Europe

In upcoming votes for the EU's most indebted countries, the left will have to battle both the forces of austerity and a resurgent xenophobic right.
By Conn Hallinan | September 9, 2015

Between now and next April, four members of the European Union (EU) will hold national elections.

They’ll go a long ways toward determining whether the 28-member organization will continue to follow an economic model that’s generated vast wealth for a few, widespread misery for many, and growing income inequality for all.

The choice is between an almost religious focus on the “sin” of debt and the “redemption” of austerity, as opposed to a re-calibration toward economic stimulus and social welfare.

The backdrop for elections in Greece, Portugal, Spain, and Ireland is one of deep economic crisis originally ignited by the American financial collapse of 2007-08. That meltdown burst real estate bubbles all over Europe — particularly in Spain and Ireland — and economies from the Baltic to the Mediterranean went off the rails. Countries like Ireland, Greece, Spain, and Portugal saw their GDPs plummet, their banks implode, and their unemployment rates reach levels not seen since the Great Depression of the 1930s. Debt levels went through the ceiling.

The response of the EU to the crisis was a carbon copy of the so-called “Washington consensus” that the International Monetary Fund (IMF) applied to indebted Latin American countries during the 1990s: massive cutbacks in government spending, widespread layoffs, and double-digit tax hikes on consumers.

Instead of lowering debt levels and jumpstarting economies, however, the IMF strictures for Latin America did exactly the opposite. Cutbacks, layoffs, and high taxes impoverished the majority, which in turn tanked economies and raised debt levels. The formula was a catastrophe that Latin America is still digging itself out from.

But the strategy was very good for a narrow stratum of banks, speculators, and multinational corporations. U.S, British, German, Dutch, and French banks helped inflate real estate bubbles by pouring low interest money into building binges. The banks certainly knew they were feeding a bubble — land prices in Spain and Ireland jumped 500 percent.

However, as economist Joseph Stiglitz points out, the banks had a trick: Their private debts would be paid for by the public, just as they were in the United States under TARP.

Taxpayers did pick up the tab, but only by borrowing money from the troika — the IMF, the European Central Bank, and the European Commission — and accepting the same conditions that tanked Latin American in the 1990s. History was replicated on another continent.

Lines in the Sand

The upcoming elections will pit the policies of the troika against anti-austerity movements in Portugal, Greece, Spain, and Ireland.

If these movements are to succeed, they’ll first have to confront the mythology that the current economic crisis springs from avaricious pensioners, entitled trade unionists, and free spending bureaucracies — rather than irresponsible speculation by banks and financiers. And they’ll have to do so in a political arena in which their opponents control virtually all of the mass media.

Never have so few controlled so much that informs so many.

The election terrain is enormously complex. And while resistance to austerity gives these movements a common goal, the political geography is different in each country.

The left essentially has to fight on two fronts: first, against the policies of the troika, and second, against a rising tide of racist, xenophobic, and increasingly violent right-wing movements that have opportunistically adopted anti-austerity rhetoric. The openly neo-Nazi Golden Dawn in Greece and the fascist National Front in France may attack the policies of the EU, but their programs have nothing in common with organizations like Greece’s Syriza, Ireland’s Sinn Fein, Spain’s Podemos, or Portugal’s Left Bloc.

Size counts in this coming battle. Because Greece makes up only 1.3 percent of the EU’s GDP, the troika could force Greece to make a choice between, in the words of former Syriza finance minister Yanis Varoufakis, “suicide or execution” —suicide if Syriza accepted another round of austerity, execution of the country’s banks and financial structure if it did not. Because it is small, Greece’s death would scarcely cause a ripple in the EU. A similar situation exists for Ireland and Portugal.

But not for Spain. Spain is the 14th largest economy in the world and the fifth largest economy in the EU. Bankrupting it or driving it out of the Eurozone — the 19 countries that use the euro instead of a national currency — would cause more than a ripple. It could sink the entire enterprise. That’s why the austerity measures the troika impressed on Spain were severe, but not as onerous as those inflicted on Ireland, Portugal, and Greece.

Besides trying to ameliorate the worst aspects of the troika program, the anti-austerity left faces an existential question: Should their indebted countries remain in the Eurozone, or should they call for withdrawal and a return to national currencies?

The Eurozone has been a disaster for most its members, except Germany and, to a certain extent, Austria and the Netherlands. While the currency is common, there is no shared responsibility for the results of economic unevenness. In the United States, big economies like California help pay the way for small economies like Mississippi, under the assumption that a common interstate market is a good thing. In the Eurozone, it’s every man for himself — and if you’re in trouble, talk to the troika loan sharks.

Since the euro is controlled by the European Central Bank — read, Germany — countries can’t manipulate their currencies to help get themselves out of trouble the way the U.S., China, Russia, India, Brazil, Great Britain, and others do. A currency union doesn’t work without a political union, and such a union is a bad idea when it puts countries like Germany and Greece on the same playing field. In the end, the big dogs dominate.

While the issues throughout the Eurozone may be similar, each country is different. A short scorecard:

Syriza, the left-wing party that won the last election, has split. Twenty-five former Syriza deputies have formed the Popular Union party and called for full resistance to the troika’s demands.

Despite retreating from his previous opposition to any new austerity, polls show that Alexis Tsipras — the Syriza prime minister who recently resigned to call new elections — remains popular. The right-wing New Democracy party and center-left PASOK, who formerly dominated Greece, have been badly discredited, and the centrist Potami Party doesn’t have a clear program except “none of the above.”

The left should do well, but it will be divided. Division in the face of the troika is perilous, but this battle is a long way from over, and there are creative ways to resist the troika without taking it head on. A civil war within the Greek left, however, could be disastrous.

Portugal is currently dominated by the conservative People’s Party-Social Democratic Party coalition that holds 132 seats in the 230-seat assembly. But polls show the anti-austerity opposition running neck and neck with the center-left Socialists, who currently control 74 seats.

The Socialists put in the austerity program, but have since turned against it. The left-wing United Democratic Coalition, an alliance of the Communist Party and the Greens that currently controls 16 seats, and the Left Bloc, which currently holds 8, each look primed to pick up deputies.

There’s a strong possibility that the conservatives will fall, and that the center-left and left opposition will form a coalition government. Together these parties control 98 seats. They’ll need 116 to form a government.

The political situation in Spain is fluid.

The right-wing ruling People’s Party is in trouble because of several major corruption scandals and its enthusiastic support for austerity. The Socialist Party has recently increased its popularity, but it was the Socialists who instituted the austerity policies in the first place.

Support for the left-wing anti-austerity Podemos Party appears to have stalled, but it has elected, or helped to elect, the mayors of Madrid, Barcelona, Cadiz, and Zaragoza. Unlike Syriza, which is a coalition of left parties, Podemos is a grassroots organization that knows how to get the voters out.

There is also the center-right Ciudadanos Party that did well in spring elections, which has espoused a few populist-leaning positions. But its anti-immigrant and anti-abortion positions complicate matters, and its economic program is at best opaque. Those things are not likely to translate into major electoral gains.

Whatever happens, Spain is no longer a two-party country, and the left will play a key role in any coalition building to form a government.

But there’s a wildcard in this election: the newly minted Citizens Security Law, which the People’s Party rammed through parliament. It’s aimed at suppressing demonstrations, criticism of the government, and free speech. It’s clearly aimed at shutting down Podemos.

“Volatile” is the only way one can describe the Irish Republic, where the polls shift from month to month.

The economy is growing, but the troika’s austerity regime is still raw. Over 100,000 mortgages are under water, and since 2008 some 40,000 people — mostly young professionals — have fled to Britain, Canada, Australia, New Zealand, and the United States, inflicting a crippling brain drain on the island.

The centrist coalition of Fine Gael and Labor currently rules, but that’s likely to change after the election. Polls show Fine Gael at 28 percent and Labor at 7 percent. At 21 percent, the left-wing, anti-austerity Sinn Fein Party is in the number two post, although its support has fallen off slightly since last year.

However, the popularity of its leader, Gerry Adams, has been climbing.

Lastly, there’s a mix of independent parties, ranging from greens to socialists, supported by 24 percent of the voters. Most are anti-austerity and potential coalition partners if the ruling parties fall. The conservative Fianna Fail Party is polling about 20 percent.

In addition to confronting the enormous power of the troika, delivering services, and creating jobs, the left will have the added challenge of differentiating itself from the racism of the right — particularly amid an acute refugee and immigration crisis that governments have been unwilling to find a humane solution for.

Since of the bulk of the refugees are generated by the irresponsible policies of countries like France, Britain, Italy, and Germany in Afghanistan, Libya, and Syria, the left must clearly link the foreign adventurism of their elites to the flood of people now seeking safety from the storms those elites helped to generate.

None of this will be easy, and disunity will make it harder.

Meanwhile, the left elsewhere in the world cannot expect small countries like Greece, Portugal, and Ireland to take on the power of international capital by themselves. Not since the rise of Nazism has there been such a pressing need for international solidarity.

In a very real way, we are all Greeks, Spanish, Portuguese, and Irish. These elections are as much about the rest of us as they are about the parties and movements that have decided to resist a species of capitalism that is particularly red of tooth and claw.

Foreign Policy In Focus columnist Conn Hallinan can be read at Dispatches From the Edge and Middle Empire Series.