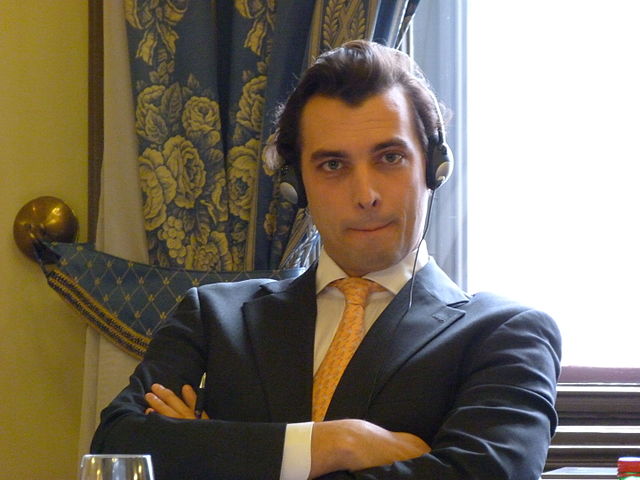 Thierry Baudet: The New Kid on the Nationalist Block

The latest right-wing populist to emerge in the Netherlands is a very dangerous man.
By Mira Oklobdzija | May 10, 2019

In the media, both local and international, this new kid is called a “political dandy,” a “flamboyant populist,” “not your typical populist,” “the naked populist,” “the far right’s rising star,” “a new face,” and the “Dutch far right’s new figurehead.” He is sure of himself, exposing his intellectual rather than physical muscles (though certain naked poolside Instagram photos are in circulation). He likes to smile at the cameras and everybody around him. He plays piano (often Brahms), enjoys chess, believes himself likable and believes his country to be right (as “right” as he is).

Born in 1983, Thierry Henri Philippe Baudet is a Dutch politician, the founder (in 2016) and the current political leader of the right wing party Forum for Democracy (Forum voor Democratie, FvD). His party intends, among other things, to introduce a high tax-free bracket for everyone, abolish taxes on gifts and inheritance, introduce drastic changes in elementary and secondary education, expand the armed forces, and privatize the Dutch public broadcasting organization.  The party promises direct democracy through binding referenda, as well as directly elected mayors and prime Minister. It also favors a government of apolitical experts, with top civil servants required to reapply for their positions when a new cabinet is formed.

Apart from that, FvD strongly opposes the European Union and has called for a referendum on Dutch EU withdrawal. According to its nationalist viewpoint, Dutch culture should be protected and border controls reinstated to prevent what it perceives as mass, unchecked immigration. To that end, the party wants to introduce a “Dutch Values Protection Act” and ban Islamic face veils and other face coverings.

In February 2019, FvD had nearly 31,000 members, the majority of whom did not have prior active political experience. However, during the 2019 provincial elections, which had the highest turnout in 30 years, they won 86 seats spread across the 12 provinces of the Netherlands. According to Ipsos, these voters were mainly older, white men (64 percent), which is normal for radical-right parties, while those who voted for GroenLinks (Green Left), the other big winner in this election, were younger, of both genders, and highly educated. Ipsos also asked voters why they voted FvD:

79% said they voted for the nationalist party because they are against the cabinet. The most prevalent reasons for this are the costs involved in climate measures, immigration and integration. The FvD mainly stole voters from the other right wing parties. 31% of FvD voters voted for the PVV in the parliamentary election in 2017, 15 % voted VVD then and 10%t CDA. 18% voted FvD before, and 5% did not vote in the previous elections.

Thierry Baudet himself is a loud and proud Euroskeptic. He doesn’t hide that he is a xenophobe opposed to multiculturalism, though he would prefer different wording. Dispensing with modesty, he has called himself “the most important intellectual of the Netherlands.” This intellectual is an advocate for the return to nation states in order to “preserve the native cultures and ethnicities of Europe as they are.” In his own words, he is not religious, but rather an “agnostic cultural Christian.”

He has strong opinions about art and music, and is not shy about giving his opinion in other fields as well. For example, he believes that “cultural Marxism” is a calculated effort to destroy Western culture by academic and intellectual means through multiculturalism, political correctness, and tolerance towards homosexuality and trans-sexuality. Baudet boldly accuses the European Union of being “a Cultural Marxist project, with the aim of destroying European Civilization.”

He doesn’t believe in climate change (‘There is no increase in extreme weather. The climate is warming up at a much slower rate than predicted.)” He has strong opinions on women (“I do know that women in general do not excel as much in some professions and are less ambitious. They are often more interested in family and suchlike.”). He fears the future of the Dutch (“The homeopathic dilution of the Dutch population with all the peoples of the world means there will be no Dutch people left.”). He’s a big fan of Donald Trump (“Trump wouldn’t just be great leader for America: he would be a great leader for the West as a whole.”). And, of course, he has a high opinion of himself (“I knew from the start that I would be the only person capable of changing politics. I don’t see any other talented people in the Netherlands.”).

“Baudet speaks with a forked tongue,” opines Dutch journalist, Harriët Duurvoort. “He clearly flirts with fascism, almost in a romantic way—although he’s eager to distance himself from the real racists when held accountable.”

Joost de Vries, a journalist who works for the prestigious Dutch weekly De Groene Amsterdammer, offers an even more damning assessment: Baudet has ”sharp features, good hair, appears kind of buff in his tight suits, and usually always looks like he’s about to audition for the part of Patrick Bateman, the investment banker who hides the darker side of his personality from his co-workers in Bret Easton Ellis’ novel ‘American Psycho’.”

started his maiden speech in parliament in Latin (which prompted classicist Mary Beard to step in to correct his many mistakes), he frequently quotes poetry, has a grand piano installed in his offices in the House of Representatives, and has published two novels. He talks about the restoration of a nationalistic, masculine society, and the need to not apologise for – for example – colonialism or racist and sexists structures in society, but to straighten your back and walk tall. If you are conservative, affluent, educated, white cis-male, you’re fine. If you’re a woman or a minority, well, you’re bad.  Wilders was never available. He tweeted, but did no interviews, skipped debates, never claimed to read any political thinkers. Baudet, on the other hand, is all over the place: he writes books and visits all kind of (right-wing) intellectuals… Out of 75 seats in total, Baudet now has 13 in the Eerste Kamer, or upper chamber. That’s a surge, but hardly a takeover. What’s new is this: many voters who’d always thought Wilders to be too crude or uncivilised now feel they have someone they can vote for without feeling crude themselves.

Thierry Baudet is one of the many faces of populism in Europe: Marine Le Pen in France, Matteo Salvini in Italy, Prime Minister Viktor Orban in Hungary,  to name just a few. The nationalist and far-right parties across Europe are sensing an opportunity, particularly with European Parliament elections coming up later this month. The European Union, as a political force and option, is in turmoil. It is only a question of time before right-wing parties across Europe will replace the sporadic meetings of their leaders with a sort of coalition. Exploiting popular dissatisfaction with governments, right-wing parties are warning voters about globalization, stressing that holy national identities are endangered and stirring fear of the unknown (migrants).

Right-wing blogger Ignyaz Degtyarov is not alone in his approval of a serious growth of the right in Europe. Commenting on the Dutch elections, he exclaims:

Forum for Democracy is Holland’s best and perhaps only bet at realising a ‘Patriotic Spring’ that may finally begin to clean up the ruins left behind by the generation of ’68. But it must happen now. Before it is too late.

These right-wing populist parties know how to mobilize emotions, spreading fear and offering themselves as the only ones with a solution. They focus the attention on the concrete issues people can easily identify with. They are prone to distance themselves from traditional political structures’ presenting themselves as “natural ally” of the people and not of the “corrupt elite’.” They use new media to their advantage. The voters are reacting positively to these bearers of concrete directions. It is much easier to follow a charming leader than to agonize over all sorts of nuances, moral dilemmas, empathy for “others,” and worries about the future of the planet.

Truth to be told, there’s not much left of the left in today’s Europe. The more to the left one looks, the smaller these parties and movements get. At this point of time, they are more of the social corrective than a strong force in any given society. They continue to remind their compatriots that tolerance is good, discrimination is bad, and human rights are essential for a decent life. Wars, the left points out, are not simple patriotic outbursts of national self-defense but the result of the political manipulation of so-called patriots in preparation for an attack on another country. Multiculturalism has more than one positive aspect, the left asserts, and this endangered planet is our common heritage. But the left will have to experiment with some new approaches or else risk total collapse.

Baudet is a patriarchal xenophobe, an unmistakably narcissistic and pretentious poseur. But he can be charming and is not stupid. He has a great talent for self-marketing. Although Baudet’s ideas are clearly very extreme, “he packages them in a tremendously charming, attractive way,” notes Leo Lucassen, research director at the International Institute for Social History in Amsterdam. “He claims to forcefully reject racism and anti-Semitism, and says he will not allow them in his party in any form. At the same time, he dog-whistles through provocative statements that he later retracts, adds nuance to, or claims were intended ironically.”

All this makes him a very dangerous individual indeed.