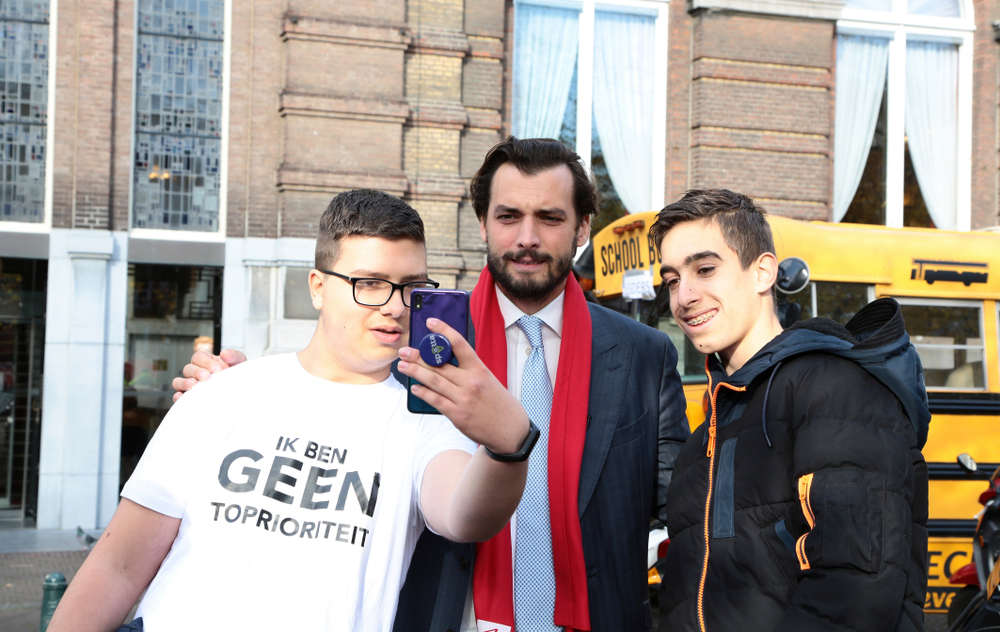 Thierry Baudet, the Dutch right-wing populist, has launched a new persona as an anti-vaxxer.
By Mira Oklobdzija | December 3, 2021

Around the world, various groups of people are protesting against government-imposed measures to combat the pandemic. Some are confused, many are frustrated, angry, and eager to vent their emotions, even violently. All of them are under the influence of one or another sort of fear, and fear is always a fertile ground for master manipulators. For this reason, COVID-19 is making Thierry Baudet, the infamous right-wing Dutch politician, happier by the hour.

Baudet, still the leader of Forum for Democracy (Forum voor Democratie, FvD), is no longer just a naughty boy, an egocentric populist. He has turned himself into the perfect example of a manipulator in action. In the first phase of his political development in the Dutch Parliament, he focused on criticizing the European Union and “protecting Dutch culture.” He took it upon himself to persuade potential voters that climate change is invented—so that the state would not have to implement any costly measures—and that migrants are a danger to Dutch society and also an expense to the state.

But in 2020 he was something new, different in style and rhetoric compared to most of his colleagues in the Dutch Parliament, and the voters liked it.

During this second political phase, Baudet left the top position of his party amid accusations of racism and anti-Semitism. He wasn’t gone for long. Soon he was spreading coronavirus conspiracy theories and looking eagerly for new followers. Even though he called for a lockdown on March 18 2020, together with fellow anti-immigrant politician Geert Wilders, Baudet turned around and suddenly began to insist that lockdowns were stupid and absurd. His reversal on the lockdown issue served him well. The Forum for Democracy jumped from two to eight seats in the Parliament after the elections in March 2021.

During 2021, Baudet continued listening to the pulse of the people and behaving accordingly. On a TV program, he claimed that people don’t really suffer from COVID-19, that the mortality rate is not high, that anybody under 70 doesn’t have to worry, and that the tests are unreliable. In his numerous addresses to the public, he has regularly attacked government measures and, with equal passion, spread a range of conspiracy theories about powerful people using the pandemic to gain complete control over everybody. In a speech to Parliament last June, he cited a ten-year-old document published by the Rockefeller Foundation about a future scenario called Lock Step, in which all the world’s governments coordinate to impose restrictions on humanity. He said that

the closure of our country, of half the world, which has lasted a year and a half due to a flu variant, is madness. That we live with this bullshit—non-functional masks, that we follow the completely meaningless distance rules. And see our companies, our social lives broken down. This coronavirus period has been obedience training…The globalist plan has found the gateway, and the next step towards mass surveillance and total control can now be taken.

For Baudet, the pandemic is overrated and, because his followers are eager to return to their pubs and football stadiums, everybody should roam freely. Baudet appears in meetings like a popstar, with his hands in the air and a “look-how-brave-and-charming-I-am” smile on his face. Speaking at the protests in The Hague in November, he said that he would rather die than get vaccinated. On Twitter, he got even bolder by using some of the same rhetoric as the American far right: “The situation today can be compared to the 1930s and 1940s. The unvaccinated are the new Jews.” To the outrage of the Jewish community, some demonstrators appeared in the protests that followed with yellow stars on their jackets.

Observing that the popularity of Dutch royalty is considerably lower than ever as a result of scandals, Baudet even turned against the King, blaming the “violation of the fundamental right to physical integrity” on outgoing health minister Hugo de Jonge and King Willem-Alexander. “No regime, not even in the Second World War, has ever gone that far. We must rise up!” he proclaimed.

Baudet’s nephew was quick to distance himself from these statements. “Thierry has nothing to do with democracy,” Xavier Baudet said. “There’s a killer on the road. Ordinary, lovely people are dying of the coronavirus. What he is doing now is destructive. His position concerning the virus is lethal.”

In Parliament, meanwhile, Baudet’s colleagues have been uncertain about how to respond. “It’s really a dilemma,” Christian Union leader Gert-Jan Segers has observed. “Sometimes you really hear an insanity that makes you think: should I respond to that? If I respond to that, I make it bigger. Then I end up in a video that is completely out of context. You are framed, which only bothers you. So sometimes you think never mind. But sometimes not. This is insane. This is silliness.”

But as the Netherlands is the birthplace of Spinoza, the Dutch tend to indulge in active tolerance. There is much talk of “freedom of expression.” But Baudet’s co-MPs nurture concerns about his mental health. And Dutch journalists wonder whether he has “gone too far.” These concerns extend to his party. Should FvD members be invited to talk shows or debates? NRC editor-in-chief René Moerland claims that FvD is a special party in the Netherlands and investigative journalists need to follow and expose its radicalization. Media analyst Vincent Crone has argued in favor of calling the party fascist: “They have illiberal views and constantly question the established institutions. Fascists experience the feeling that they are living in an overwhelming crisis. From a period of destruction or decay must come a radical new beginning, a national rebirth. The authoritarian leader must get this done. Anyone who contradicts his party is a traitor.”

The basic question that the Parliament and journalist must answer has to be: is tolerating a bad, intolerant, dangerous guy really a form of tolerance or something else entirely?

Thiery Baudet is a perfect case-study of political opportunism and modern manipulation tactics. He has no problem embracing mutually contradictory views such as allowing potentially contaminated individuals to move freely around society while denying refuges freedom of movement. From demanding lockdown, he pivots to complete opposition to this sort of measures.

Has he gone too far? Baudet himself no doubt thinks that he hasn’t gone far enough.