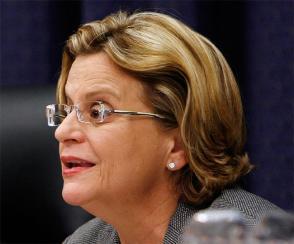 Washington's approach toward Iran does not even merit a label, because there is no coherent policy -- just a series of actions lurching toward a potential regional war.
By Paul Mutter | November 9, 2011

“To strengthen Iran sanctions laws for the purpose of compelling Iran to abandon its pursuit of nuclear weapons and other threatening activities, and for other purposes,” begins HR1905, the so-called “Iran Threat Reduction Act” advanced by the U.S. House Foreign Affairs Committee this week. The resolution, put forward by the chairwoman of the committee, Florida Republican Ileana Ros-Lehtinen, has 349 co-signers, more than enough to pass a House vote. It will increase sanctions on Iran and limit U.S. contact with Iranian officials, and pressure to enact it will be strengthened by the release of a November IAEA report asserting that Iran has been secretly developing nuclear weapons (and a delivery system for them) since 2003.

But Congress is not really interested in discussing the matter with Iran. One of the measures bans virtually all contact between U.S. and Iranian officials unless the president can certify to Congress – at least 15 days in advance – that not meeting “would pose an unusual and extraordinary threat to the vital national security interests of the United States.” The bill targets not only Iran’s nuclear weapons program, but justifies sanctions for “other purposes” as well – amounting to what William O. Beeman calls an agenda of “making certain that the United States and Iran never achieve formal relations.”

Why bother with that, after all, when we want regime change, which would please the U.S. government, as well as two of the lobbying groups behind HR1905, AIPAC and the Foundation for the Defense of Democracies?

Thomas R. Pickering, Ronald Reagan’s second-term ambassador to Israel (and later George H. W. Bush’s UN ambassador) has come out against the move, writing an op-ed with fellow Reagan-era ambassador William H. Luers in the Daily Beast that denounces the move as a step towards an unwanted and unnecessary military conflict with Iran:

“It is fair to say that no official of the U.S. government has any direct knowledge of the Iran of today,” they write. “That ignorance of this powerful adversary dangerously weakens our ability to know how to achieve U.S. objectives and protect U.S. interests.”

That should be self-evident, but this bill came from the House Foreign Affairs Committee, which is fine with cutting funding for UNESCO and USAID to punish Ramallah’s UN bid, while maintaining with only limited interruption the flow of funding for the Palestinian Authority’s security forces. We do have priorities, after all – what exactly they are, though, is not exactly clear.

This disconnect between the goal and reality of sanctions is seen in one of the hardest-hitting sanctions, a measure that will block Iranian civil aviation from obtaining replacement parts for their passenger aircraft. This will punish Iranian officials – who have access to military transport – how? Fewer holiday vacations? Longer lines at the check-in counter? It certainly punishes civilian passengers, Iranian and non-Iranian alike, as evidenced by Iran’s poor air safety record.

Ron Paul, the libertarian-leaning Republican presidential candidate, is as incredulous as the Reaganites quoted above, reiterating his August 2011 argument that “At least our leaders and Reagan talked to the Soviets. What’s so terribly bad about this [talking to the Iranians]?” In response to the Iran Threat Reduction Act, which is filled with references to advancing “democracy” and “freedom” in Iran, Paul even asked if Congress was not simply seeking to use the new round of sanctions to increase support for aiding anti-regime movements in Iran, regardless of their actual likelihood of success.

It’s a rhetorical question, of course. Regime change is on everyone’s mind (maybe we can do it solely by air these days?), even though the history of U.S. support for opposition movements in Iran constitutes a poor record indeed.

Well, except for the pro-Shah one we bankrolled in 1953.

But nevertheless, our willingness to throw opposition movements we “support” under the bus was demonstrated right on Iran’s doorstep when in 1991, the United States encouraged a Shia revolt against Saddam Hussein in southern Iraq that ended a series of massacres. At the other end of the country, the United States did enforce a no-fly zone over Kurdish territories, not that this removed Saddam Hussein from power. It took a land war to do that. And Iran is a lot bigger than Iraq.

Would the collapse of the Iron Curtain (and all those accompanying regime changes that didn’t cost the Pentagon even one bullet) have happened the way they did if U.S. officials were restricted from meeting with Warsaw Pact member states’ officials, or if the United States were still refusing in 1980 to even recognize the Soviet Union (as it did from 1917 to 1933)?

Ironically, one of the organizations supporting this effort to isolate Iranian and U.S. officials from each other is the Foundation for Defense of Democracies (FDD). It’s ironic because some of the politicians associated with the FDD seem to think of themselves (and the organization) as latter-day Reaganites. Senator Mark Kirk, a hawkish Illinois Republican who gets high marks from AIPAC, suggested that the United States should publicize the plight of Iranian political prisoners as Reagan did in the 1980s with Soviet dissidents.

For a man who thinks of the FDD as a possible forum for an Iranian version of the Helsinki Accords, Kirk seems to be ignoring the fact that the FDD has some in-house intellectuals who reject dialogue altogether with Iran (Reagan didn’t just talk to Soviet dissidents, after all). The FDD is vocal about regime change in the Middle East, especially in Iran, and how it cannot occur through diplomacy. The FDD is so hawkish that some of these aforementioned intellectuals have even called for a U.S. military takeover of Saudi oil fields.

A Restriction without Precedent

The historical vacuum in which this politicking is taking place is telling. The United States had diplomatic relations with the Soviet Union in the 1980s, and Congress did not restrict Ronald Reagan’s capacity to engage Soviet officials (can you imagine Congress forcing Reagan to submit all his planned meeting agendas with Soviet officials for review 15 days in advance?). Their meetings didn’t in and of themselves end the Cold War or lead to the collapse of the Soviet Union, but they were a part of that process. So, you’d think “peaceful” regime change advocates aligned with spendthrift Republicans would be all for dialogue. Reagan rattled the saber a lot, but he also went to Reykjavík and Moscow, something not played up in the interventionist mentality of those claiming his mantle.

The United States did not always have relations with the Soviet Union. It was a contentious issue, and not until FDR came along did the United States formally recognize the USSR in 1933. It would have been pretty difficult for Reagan to meet with Gorbachev (or Eisenhower with Khrushchev, or Nixon with Brezhnev) if he had left it to Congress – always worried about appearing weak before Eastern European voters – to decide who gets to meet with whom.

Also often left out of that narrative is how badly industrialists like Henry Ford and Fred C. Koch wanted to conduct business with the USSR with the U.S. government’s assurances behind their operations. Though it’s mostly under the radar, Halliburton and the sons of Fred C. Koch – yes, the infamous Koch brothers – have also worked to limit U.S. sanctions on Iran.

And, oddly enough for those politicians against economic relations with Iran, economic entanglement did prove to be an effective tool in Washington’s arsenal for contributing to the Soviet collapse. The Soviet Union had become so dependent on Western purchases of its oil (paid for in foreign currency that went to buy grain and service the country’s growing debt) that by the mid-1980s, international oil prices and Soviet mismanagement had severely handicapped one of Moscow’s fiscal cornerstones.

Indeed, the ripple effect of the measures aimed at Iran’s Central Bank (and energy sector) may provoke an international and corporate outcry against the legislation: the National Foreign Trade Council (NFTC), a trade association comprising such titans of globalization as Boeing, Chevron, Microsoft, AIG, and Halliburton, opposes the new sanctions, as well as preexisting ones. The NFTC holds that trade liberalization will help prompt reforms in Iran.

Normalized U.S. relations with Iran will not likely come about at the urging of Wal-Mart, but stranger things have happened. Nor is such a corporatist path to diplomatic normalization even desirable (e.g., the People’s Republic of China scenario). Rather, U.S. conservatives, liberals, and neoconservatives alike demonstrate numerous inconsistencies in dealing with Iran, despite our ostensible commitment to “engagement” with the country and “respect” for its people.

What we are doing today is not the sort of “containment” we reverently credit with keeping the Cold War from turning into World War III. What we are doing today does not even merit a label, because there is no coherent policy – just a series of actions lurching toward a potential regional war that would, if it occurred, draw in Iraq, Lebanon, Israel, and Saudi Arabia. The latter two are just itching for a preemptive strike on Iran.

HR1905’s restrictions on whom the president can receive may not survive a constitutional challenge from the White House. But all of the bill’s sanctions will likely become law, especially with the new IAEA report now out. After all, who cares about airline safety, or diplomatic relations?

Or averting a third Gulf War.

Paul MutterPaul Mutter is a graduate student at the Arthur L. Carter Journalism Institute at NYU and a contributor to Foreign Policy In Focus.