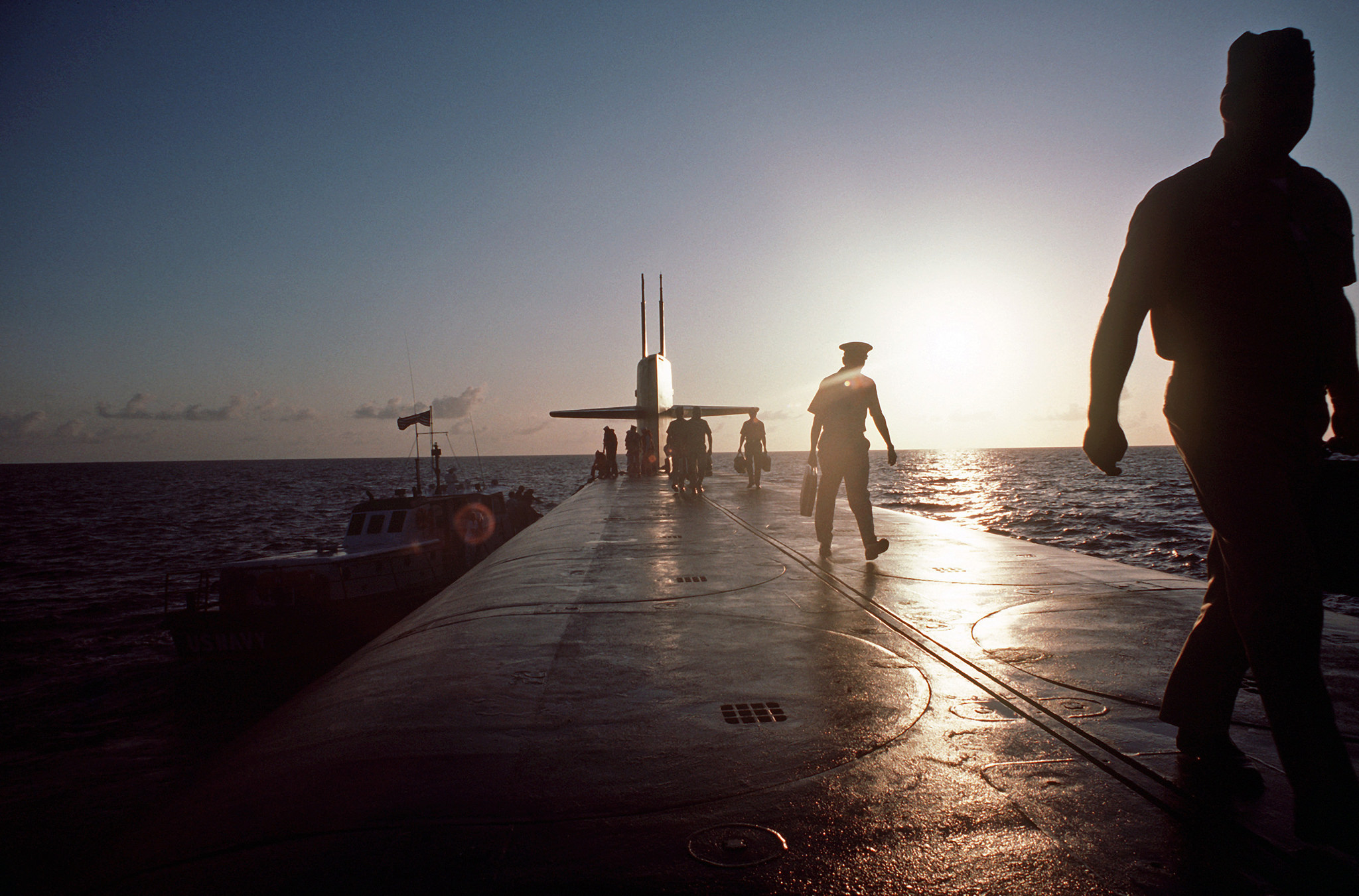 There Are Thousands of People Who Could Launch a Nuclear War

It's scary to think of Donald Trump or Kim Jung-un with a nuclear button. Scarier are all the nameless functionaries with the same.
By Conn Hallinan | January 24, 2018

When President Donald Trump bragged that his nuclear “button” was bigger and more efficient than North Korean leader Kim Jong-Un’s, he was perpetuating the myth that the leaders of nuclear-armed nations control their weapons.

Indeed, the very nature of nuclear weapons requires that the power to use them is decentralized and dispersed. And while it is sobering to think of unhinged-seeming leaders like Kim and Trump with their finger on the trigger, a nuclear war is far more likely to be started by some anonymous captain in an Ohio-class submarine patrolling the Pacific, or a Pakistani colonel on the Indian border.

In his book The Doomsday Machine: Confessions of a Nuclear War Planner, Daniel Ellsberg says that the recent uproar over Trump’s threats to visit “fire and fury” on North Korea misses the point that “every president has delegated” the authority to use nuclear weapons. “The idea that the president is the only one with the sole power to issue an order that will be recognized as an authentic authorized order is totally false,” he told National Public Radio.

If a single “button” were the case, decapitating a country’s leader would prevent the use of nuclear weapons. Take out Washington (or Mar-a-Largo), Moscow, or Beijing, and you would neutralize a nation’s nuclear force.

In reality, the decision to use those weapons merely shifts further down the chain of command. The Russians call it “dead hand”: Moscow goes, and some general in the Urals launches an ICBM, or the captain of a Borei-class submarine in the Sea of Okhotsk fires off his multiple war head SS-N-32 “Bulava” missiles.

During the 1962 Cuban missile crisis, a single officer on a Soviet submarine off Cuba, Vasili Arkhipov, refused to okay an order by the sub’s first and second in command to launch a nuclear-tipped torpedo at U.S. warships that were harassing the vessel. If he hadn’t intervened, according to Ellsberg, it’s quite likely there would have been a nuclear war between the U.S., its allies, and the Soviet Union.

“Use them or lose them”

The problem with nuclear weapons — besides the significant fact that they’re capable of destroying human civilizations and most life on the planet — is that they’re actually quite fragile, with a very limited life span.

“Use them or lose them” is the philosophy of nuclear war planners, because if you hesitate, your opponent may destroy them before they can be launched.

The more efficient and accurate your nuclear force, the more destabilizing it becomes. For instance, the U.S. has thousands of nuclear weapons deployed in a “triad”: air, land, and sea. To attack the U.S. with nuclear weapons would be tantamount to committing suicide, because no matter how large the attacking force was, it would be almost impossible to eliminate every warhead.

Russia also has vast numbers of weapons, although they are more vulnerable than those of the United States. Russia has fewer ballistic missiles subs, does not really have a modern strategic bomber force, and its land-based missiles are endangered by recent American breakthroughs in warhead technology. According to the Bulletin of Atomic Scientists, the U.S. now has the capability to “destroy all of Russia’s ICBM silos” in a first strike and still retain 80 percent of its warheads in reserve.

A “first strike” attack — also called “counterforce” — has always been central to U.S. military planning, and was recently adopted by the Russians as well. As a result, both nations keep their nuclear forces on a hair trigger, fearful that the other side could neutralize their nuclear weapons with a first strike.

The danger here, of course, is war by mistake, and there have been at least a half dozen incidents where the two countries have come within minutes of a nuclear exchange. A weather rocket, a flock of geese, and an errant test tape have all brought the world to the edge of disaster.

The time frame for making a decision about whether one is under attack or not is extremely narrow. It’s estimated that the U.S. would have about 30 minutes to determine whether an attack was real. Because the Russians don’t have a reliable satellite warning system, that time frame would be about 15 minutes or less for Moscow.

China and India had a no-first use policy, but recently New Delhi adopted a “counterforce” strategy. The UK, France, and Pakistan all reserve the right to first use. The Israeli government, meanwhile, refuses to admit it has nuclear weapons, so it’s unclear what its policies are.

Of all the nuclear-armed countries, North Korea is the most vulnerable, simply because it probably has no more than 50 or so nuclear weapons.

Almost all estimates are that such a war would range from calamitous to catastrophic. And nuclear weapons are likely to make it the latter.

The recent talk in Washington about a limited attack on North Korea — the so-called “bloody nose” strategy — could be seen by Pyongyang as an attempt to take out its small nuclear force. Under the rule of “use them or lose them,” North Korea might decide to launch them locally (toward South Korea), regionally (toward Japan), or even at the United States. Estimates of the outcome of such a war range from the hundreds of thousands to several million dead.

Apparently there’s also a plan to take out Kim Jung-Un, but decapitating North Korea’s leadership merely devolves the decision to use nuclear weapons to some commander in the field. Plus, eliminating a nation’s leader would make it almost impossible to halt such a war. Who would one negotiate with?

“Our extinction could be one insult away”

In the end, the problem comes down to the nature of nuclear weapons themselves. Their enormous power and ability to strike quickly makes them vulnerable, and that vulnerability requires that the decision to use them be decentralized.

The recent scare that a ballistic missile was headed toward Hawaii was a bureaucratic screw up, someone pushing the wrong button on a computer. But that is how the world could end. Consider the following scenario:

An Ohio-class submarine armed with 24 Trident II ballistic missiles is on patrol in the East China Sea. Each Trident II missile has eight W-76 or W-88 warheads, 192 in all. The former pack a 100-kiloton punch, the latter up to 475 kilotons.

In total, the submarine can generate up to 91,200 kilos of explosive force. The bomb that destroyed Hiroshima was 15 kilotons. The U.S. has 18 Ohio-class submarines.

A report comes over the COM that a missile is headed toward Hawaii, and then communications go dead, a not uncommon occurrence, according to Ellsberg. The captain of the Ohio-class sub knows he’s not alone out there. Stalking him could be a Russian Yasen-class or Chinese Shang-class hunter-killer submarine. The U.S. captain needs to make a decision: Use them or lose them.

It doesn’t take a major crisis to touch off a nuclear war. Maybe things get a little out of hand between Indian and Chinese troops on a disputed Himalayan plateau. Maybe India employs its “cold start” strategy of a limited military incursion into Pakistan and some local Pakistani field officer panics and launches a tactical nuclear weapon. The recently released U.S. Nuclear Posture Review posits using nuclear weapons in the case of a major cyberattack.

As Beatrice Fihn of the International Campaign to Abolish Nuclear Weapons puts it, “Our extinction could be one insult away.”

Some 252 million years ago, something catastrophic happened to the planet. A combination of massive volcanic activity, asteroid strikes, and the release of stored up carbon dioxide in the oceans killed 96 percent of life in the sea and 70 percent of land life. Called the Permian-Triassic Extinction Event, it was the greatest die-off in our planet’s history.

Unless we get serious about abolishing nuclear weapons — something 122 nations voted to do last July — some unnamed captain in a submarine could do the same.