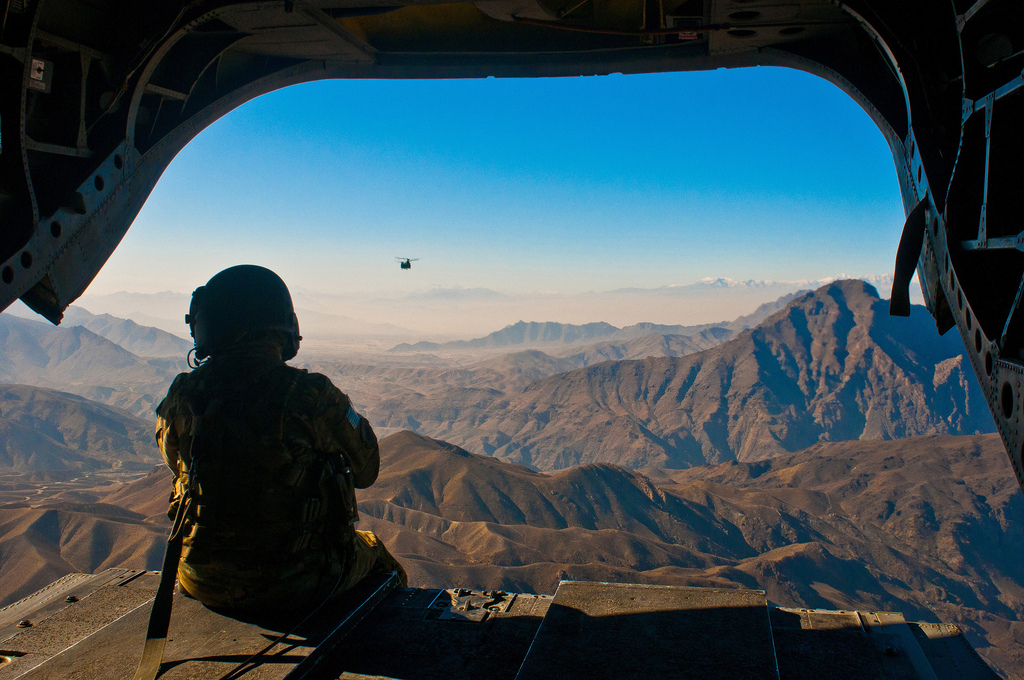 If the War Party wins in 2016, the U.S. will prepare to fight in the Eurasian heartland, the South China Sea, and the resource-rich lands of Africa. If we’re lucky, we’ll avoid any outright conflict. But the price will nevertheless be bankruptcy. (Photo: U.S. Army / Flickr)

Hyping threats from Russia, China, and the rest of the world, the U.S. War Party is gearing up to reassert American power.
By John Feffer | May 14, 2014

U.S. troops have left Iraq and are leaving Afghanistan. The “war on terrorism” now seems so last decade. U.S. military spending has leveled off, and the Pentagon is looking at some fairly serious reductions after 2015. Last month, President Obama finally pulled the various threads of his foreign policy approach into a “doctrine” that emphasizes incremental diplomacy and leaves military intervention as a last resort.

We are, it would seem, at an epochal moment in U.S. history. The Reagan and Bush Jr. administrations attempted to deepsix the Vietnam syndrome and resurrect the U.S. military as the principle tool of U.S. foreign policy. But after the failures of Iraq and Afghanistan, the syndrome has returned in an industrial-strength version. Finally, it seems as if the United States is willing to take the cop out of cooperation.

But before we stick flowers into the barrels of the Special Forces’ combat assault rifles and celebrate the transformation of the CIA’s drones into Amazon delivery vehicles, let’s evaluate what will likely be a very substantial backlash to the Obama doctrine. Depending on what happens in the mid-terms and more importantly the next presidential elections in 2016, we might be looking at yet another effort to drive a stake through the heart of the Vietnam-Afghanistan-Iraq syndrome and reassert, once again, American military power.

In the last presidential election, we narrowly escaped a return to the foreign policy of the 1980s with Mitt Romney. Next time around, the hawks from both major parties minus the libertarians—the War Party—may well offer something considerably more retrograde: perhaps a return to the 1890s and a celebration of American empire under Teddy Roosevelt.

But it won’t be just one war—Remember the Maine, to hell with Spain!—that the War Party will want the Pentagon to prepare to fight. Nor will it be the two or two-and-a-half wars of the Cold War heyday. Instead, the next generation of U.S. militarists—the Project for the New New American Century—will be talking about girding our loins for three wars. Before detailing this three-front global conflict, let me explain how we’ve been at this point already twice in the recent past.

Long before Obama unveiled his doctrine, the last two Democrats in the White House also tried, in their half-hearted ways, to restrain the Pentagon and elevate the State Department. For Jimmy Carter, his first two years in office marked the high point of détente and the military drawdown from the Vietnam years. Even though he turned considerably more hawkish in the second half of his term, Carter became a symbol of everything weak about the Democratic Party and its foreign policy. The events of 1979—the Soviet invasion of Afghanistan, the Iranian revolution—also conspired against President Malaise. Carter’s opponent in the 1980 election, Ronald Reagan, promised to stand up to the Russians, the Iranians, and anyone else who dared challenge Old Glory.

Bill Clinton, too, presided over a reduction of the U.S. military leviathan in the wake of the end of the Cold War. Clinton was by no means a pacifist. The United States was involved in the wars in former Yugoslavia and several attacks on al-Qaeda and its ilk during the 1990s. But the great sin of the Clinton administration, to its critics on the right, was its commitment to multilateralism. The Clinton administration actually seemed to believe in the United Nations and such associated efforts as the International Criminal Court. Beginning in 1997, the Project for the New American Century (PNAC) pushed a program that would eerily resemble the eventual foreign policy of the George W. Bush presidency, including a major uptick in military spending and regime change in Iraq. As in 1979, the events of September 11 helped to propel U.S. foreign policy in a different direction.

PNAC is dead and gone, and the Bush doctrine is buried in the sands of the Middle East. Obama has reached back to the earlier traditions of his Democratic predecessors for inspiration, borrowing a measure of modesty from Carter and a measure of multilateralism from Clinton. And Obama has encountered the same congressional resistance to his de facto tempering of American exceptionalism. Behind the Obama doctrine lurks a certain implicit assumption: that a safety net of international norms can both cushion the relative decline of the United States and contain the rise of other powers like China. Of course, Washington would like to game the system as much as possible to prolong the U.S. unipolar moment and ensure a comfortable imperial retirement. If all goes according to plan, the only conflicts that will take place will be over the terms of America’s golden parachute and our 401(k) plan (to be negotiated at trade talks, with Chinese investors, and with European banks).

But nothing ever goes according to plan. And here are three reasons why, drawn entirely from recent headlines.

On May 1, China set up an oilrig in the South China Sea in waters that Vietnam also claims. Vietnam has used YouTube to show China ramming its ships. Both sides have fired water cannons at each other. Chinese fighter jets patrol the sky above the disputed territory. Vietnam and U.S. allies Japan, South Korea, and the Philippines have all pressed Washington to check China’s more assertive claims to territory in the East and South China Seas. They want a more vigorous Pacific pivot to Asia.

On May 11, voters in two regions in eastern Ukraine supported greater autonomy in a referendum rejected by the central government in Kiev. Russian President Vladimir Putin has vowed to intervene if the interests of ethnic Russians in Ukraine are threatened. Although he has promised to withdraw the 40,000 troops currently near the border, no such troop movements have been detected. Clashes between Ukrainian government forces and separatists in eastern Ukraine threaten to spiral into a civil war. New NATO members in East-Central Europe are wary of Russia’s more assertive claims to territory near their eastern borders. Polish Defense Minister Tomasz Siemoniak, for instance, has called on the United States to “re-pivot” to Europe.

Then there’s Africa, where the United States created a new Africa Command shortly before Obama took office and where the Pentagon has recently ramped up its operations to more than a mission a day. Boko Haram, a radical Islamist group that seeks to turn Nigeria into an Islamic state, kidnapped more than 200 girls from their school last month. It’s only the latest act of extremism from a group that Washington put on the foreign terrorism list last year. It’s not clear whether the Nigerian radicals have any ties to al-Qaeda. But the war on terrorism has entered a new phase in which smaller U.S. forces partner with governments on the ground in Africa to battle non-state actors. Although some in the United States have called for an “African pivot,” no one in the region has issued such an invitation. They don’t really have to. We’re already there.

So far, the Obama administration has been rather cautious in addressing all three of these challenges. The U.S. Navy maintains more than half of its fleet in the Pacific, the Army still has bases in Europe, and Special Forces are deployed throughout Africa. But the administration has not advised military intervention in any of the three cases (though the use of drones and some “boots on the ground” in Africa certainly go beyond mere non-military strategies).

It’s also not likely that a Republican president would do anything appreciably different, although the party has practically Photoshopped Neville Chamberlain into the Oval Office. Marco Rubio (R-FL), who is likely to throw his hat in the ring for 2016, has called for perhaps the strongest responses to Russia and China. But even he has stopped short of calling for actual U.S. military intervention. After all, Americans are now thoroughly cynical about sending U.S. troops to fight overseas.

But remember: the United States maintained its two-war doctrine more as a yardstick for measuring how much money to allocate to the Pentagon. In the 1980s, hawks were not pushing the United States to start a war with the Soviet Union or Iran. Rather, they wanted to maintain the capabilities to fight both wars simultaneously if need be.

Here’s the nightmare scenario for 2016. The War Party will fight against any cuts in Pentagon spending and argue for upping the allocation in order to fight three wars simultaneously: against Russia, against China, and against non-state actors wherever they threaten U.S. interests. Sound unlikely? The Bush administration was able to transform a ragtag group of crazies—which, admittedly, had directly attacked the United States and killed nearly 3,000 people—into the “heirs of all the murderous ideologies of the twentieth century.” Imagine what the War Party, if it controlled the White House and Congress, could do with the likes of Russia, China, and the heirs of the heirs of all those murderous ideologies? If we’re lucky, we’ll avoid any outright conflict. But the price will nevertheless be bankruptcy. Forget about that imperial 401(k) plan.

It’s often pointed out that the British Empire finally collapsed because of the debts incurred by England during World War II. Washington extended London a mountain of loans to fight the war, and when the loans came due, the United States effectively replaced England as the hegemon of the “free world.”

But the process was not so cut and dried. “In July 1950, on the eve of the Korean War,” writes Tony Judt in Postwar, “Britain had a full naval fleet in the Atlantic, another in the Mediterranean and a third in the Indian Ocean, as well as a permanent ‘China station.’ The country maintained 120 Royal Air Force squadrons worldwide and had armies or parts of armies permanently based in Hong Kong, Malaya, the Persian Gulf and North Africa, Trieste and Austria, West Germany and the United Kingdom itself.” Five years after the end of World War II, someone forgot to give the British the news that their term was over.

The United States that Barack Obama inherited in 2008 was similarly a “dead empire walking,” and China now serves as the bankroller that the United States was in the 1940s. A prudent president, Obama has attempted to maintain U.S. position in the world at a lower cost and with less blowback. His critics on the left, myself included, want less empire and more prudence. But we must also acknowledge the deluge that might come après Obama and make the last few years seem like halcyon days.

If the War Party wins in 2016, all bets are off. We will prepare to fight in the Eurasian heartland, the South China Sea, and the resource-rich lands of Africa—because if we don’t fight them there, we’ll have to fight them here. Just when it seemed like we were about to give peace a chance, the United States will suddenly revert to a three-war doctrine. 2016 will be 1979 and 2001 all over again. And, as we all know, bad luck always comes in threes.