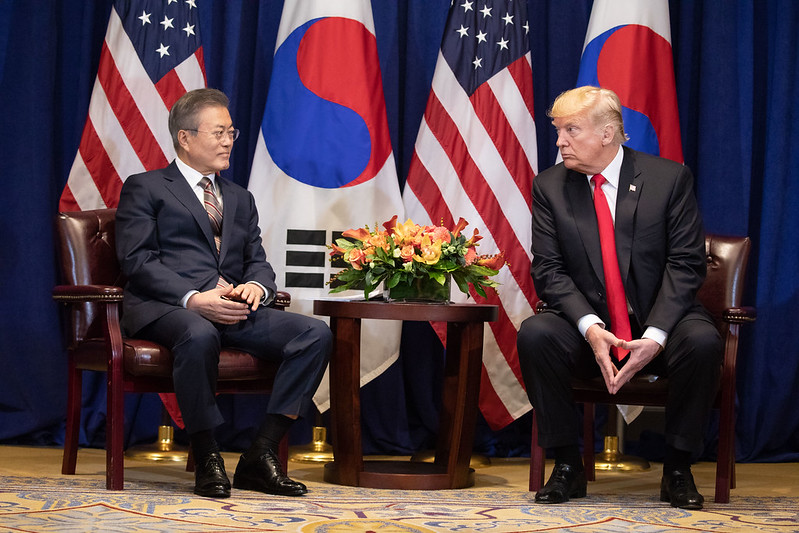 Time to Rethink the US-ROK Alliance

South Korea is trapped between a U.S. rock and a North Korean hard place. It should consider changing its relationship with the rock.
By John Feffer | June 29, 2020

North Korea has blown up the inter-Korean liaison office in Kaesong. It is threatening an all-out pamphlet war in response to defectors sending anti-regime propaganda to the north. South Korea’s unification minister has stepped down after failing to meet with his North Korean counterparts during his 14-month tenure.

Pyongyang is not happy about the balloons launched by defectors carrying leaflets and dollar bills. But the real problem is that North Korea remains heavily sanctioned and South Korea has been unable or unwilling to alleviate that situation.

Meanwhile, South Korea is being pressured from the other side. The Trump administration has pushed hard for Seoul to pay more for the maintenance of U.S. bases and troops in the country: a preposterous increase from $900 million to $5 billion. South Korea countered with a 13 percent increase that Washington rejected. Only 4 percent of South Koreans believe that their country should accept the U.S. demand.

It is very frustrating to be the object of geopolitics rather than the subject. South Korea is a weak geopolitical actor because other countries, primarily the United States and North Korea, are determining the conditions within which Seoul is operating.

President Moon Jae-in has tried to turn lemons into lemonade by presenting himself as the great conciliator. He pulled off three meetings with Kim Jong Un in 2018, two at the DMZ and one in Pyongyang, and breathed new life into inter-Korean relations. He managed to preserve a working relationship with Donald Trump, largely through flattery. Early on, he mended fences with China over the THAAD dispute. Moon did a brilliant job given the circumstances.

Much of that strategy now lies in tatters, blown up like the liaison office in Kaesong.

Some in Seoul are no doubt advising Moon to adopt a posture of “strategic patience” toward the United States. In November, American voters may well remove Trump from office, and then South Korea can negotiate with the more pragmatic and predictable Joe Biden.

But Biden’s predictability will pose an equally frustrating challenge. A Biden administration will probably accept Seoul’s offer of a modest increase in host nation support. But Biden will not likely offer a new approach to North Korea. Expect yet another strategic review of U.S. policy, followed by a continuation of the status quo: maximum pressure on Pyongyang, short of war, until it adopts a more conciliatory negotiating position. South Korea’s role as a passive actor in this drama will not change.

Perhaps it’s time for South Korea, then, to assert more independence and become a master of its own fate. Above all, that will require a reconsideration of the military alliance with the United States.

From a military point of view, South Korea doesn’t need the presence of U.S. troops on the peninsula. They serve a largely symbolic function as a concrete sign of U.S. commitment. At some point, after the resolution of ongoing negotiations, South Korea will assume full operational control of military forces. After years of arms imports, South Korea’s hardware advantage gives it a vast military superiority over the North.

The United States has been an obstacle in the way of improving inter-Korean relations. And it has forced a partnership with Tokyo that Seoul finds uncomfortable. On top of that, South Korea periodically worries that it will be drawn into the conflict between Washington and Beijing.

A cost-benefit analysis of the U.S.-South Korean alliance suggests that it no longer serves Seoul’s interests as it once might have.

Meanwhile, the United States is engaged in its own assessment of the benefits of that relationship. Under Trump, the United States has called into question virtually all of its military alliances. The burden-sharing that Trump is attempting to force on NATO, on Japan, and on South Korea is only an extreme version of what the foreign policy elite in Washington has demanded for years.

Biden is expected to take a more supportive position toward these military alliances. But the economic challenges posed by the coronavirus as well as the longer-term erosion of U.S. geopolitical influence mean that the United States will likely continue Trump’s cost-cutting approach but in more polite terms and according to a different timeline.

Instead of passively watching this process unfold, South Korea should get ahead of the curve. It should begin asserting its independence from the United States. It should prepare for the time when the two countries have a normal relationship rather than a “special” relationship.

By respectfully taking the initiative, South Korea can become a full-fledged actor in geopolitics. It can thank the United States for all of the help provided over the years (and hold its tongue about the unsavory aspects of the alliance like the prostitution around military bases). It can hold a party for the departing U.S. troops. And it can then set about re-imagining the North East Asian region with a unified peninsula at its heart.

John Feffer is the director of Foreign Policy In Focus and the author, most recently, of the novel Frostlands.