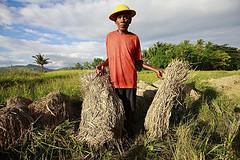 Timor: Where Has All the Aid Gone?

Money has been pouring into Timor-Leste, but it has not translated into meaningful development.
By Guteriano Neves | June 20, 2011 When Indonesia withdrew from Timor-Leste (TL) in 1999, governments all over the world expressed their sympathy for the Timorese. Donor governments promised to assist TL to build a viable state, with lasting peace and stability. Early on, the United States also committed to help TL move toward a democratic society. Secretary of State Hillary Clinton recently reiterated this commitment in her meeting with TL’s Prime Minister Xanana Gusmao. The United States, she said, wants “to continue to provide U.S. support for this incredibly important transition and transformation.” Timorese, who have suffered from Indonesian military occupation and the double standards of the United States and other Western countries for 24 years, listened very carefully to this political rhetoric, hoping that the future of the children would be better.

After 11 years, the rhetoric is still the same. But the reality on the ground has not changed much.

Timor-Leste is one of the most oil-dependent countries in the world, where more than 90% of the government’s annual budget comes from petroleum revenues. It imports everything from computer hardware to bottled water. Its infrastructure is very poor, making it hard for local farmers to transport crops to markets. Local farmers must also compete with an influx of imported goods from Australia, Singapore, and other countries. Many Timorese are still struggling with poor healthcare, lack of educational opportunities, little clean water, and other insufficient social services. Social inequality is widening, especially between the capital Dili and other districts.

These social ills are partly the result of the fragility of TL’s public institutions and the legacy of colonialism. But foreign aid has also failed to deliver on its promise in Timor-Leste.

Since 1999, Timor-Leste has received more than $5 billion. In 2009, Al Jazeera documented that each of the 1.1 million Timorese received $8,000 in aid between 1999 and 2009. This aid is given in various ways, depending on the context, donors’ policies, and international political economic circumstance. Between 1999 and 2001, most foreign aid went to resolve the humanitarian and emergency situation. However, from 2002-2006, according to Scantem Report, aid was focused on state-building through strengthening the capacity of state institutions and the delivery of core public services. The same report also reveals that 82 percent of total assistance was given through bilateral cooperation, 16 percent through the Trust Fund managed by the World Bank, and the rest went through other channels. TL’s President Jose Ramos Horta once said, “If this money is spent wisely, Timor-Leste would have been free from poverty.”

On the contrary, aid in Timor-Leste has had little impact on the local economy, policy coherence, local community ownership, and long-term vision. According to Timor-Leste’s institute for reconstruction and development La’o Hamutuk, only one out of every ten dollars spent in Timor-Leste enters the local economy. Most of it leaves the country to pay for international consultants, imported goods from other countries, military operations, and so on.

The UN missions’ expenditure alone was more than $2 billion, and multilateral as well as bilateral donor projects cost around $1.7 billion. Most UN-paid international staff in Timor-Leste enjoy salaries 10 times that of Timorese staff. Two years ago, a local newspaper discovered that an Australian citizen was paid $215,153 by the World Bank for a one-year contract as an advisor in a ministry in Timor; this in a country where more than 50 percent of the population makes less than $2 dollar a day.

Not a new phenomenon, these defects replicate the foreign aid industry in other parts of the world. Professor William Easterly, in his book White Man’s Burden, succinctly argues that, “the West has failed, and continues to fail, to enact its ill-formed, utopian aid plans because, like the colonialists of old, it assumes it knows what is best for everyone.” Timor-Leste has been subjected to many studies about the ineffectiveness of aid in building a strong foundation for long-term peace and stability. Most agree that post-conflict countries like Timor-Leste require exceptional, and more importantly, country-specific remedies.

True, aid helps to strengthen existing public institutions. But long-term peace and stability requires more than that. It requires a strong foundation for sustainable economic development, rule of law, and good governance. Timor-Leste’s case is much more than that. As a World Bank report points out, Timor-Leste started with “the virtual absence of any administrative capacity in the territory, the extremely weak human resource base and its poverty.” Timor-Leste’s situation is also characterized by poor infrastructure and low economic capacity to absorb money spent inside the country. These are the legacies of colonialism and a quarter century of Indonesian military occupation.

Foreign aid to Timor-Leste comes principally from Australia, Japan, Portugal, the EU, the United States, and China. According to data from the U.S. Agency for International Development (USAID), the United States provided $272 million to Timor-Leste between 2000 and 2008. Of that, 41 percent went to support economic growth, 31 percent went to support governance, and the rest went to health and security. A small amount of U.S. aid also went to the Trust Fund for Timor-Leste managed by the World Bank to fund some physical reconstruction projects and community empowerment projects. The United States also provides some military assistance and budgetary support for the UN Peacekeeping Mission.

Support for economic growth and democratic governance are two strategic goals of U.S. foreign aid. Additional attention is given to health and sanitation. “Only through building good policies, stable institutions, and local capacity will developing countries create their own prosperity and assume responsibility for their own security,” states the 2004 U.S. foreign aid White paper. “As a nation develops, it has less need for external aid to deal with disasters and conflict or to address disease pandemics and transnational crime. Stable, prosperous, democratic nations make better partners for the United States as they address their own interests from a foundation of interdependence. And, such countries offer growing opportunities for mutually beneficial trade and investment.” U.S. long-term national security and economic interests thus intersect with Timorese dreams of having an independent state, a prosperous society, and a stable democracy.

However, the reality on the ground does not correspond with this policy statement. According to the USAID strategy paper economic prosperity is one of the strategic goals for the State Department and USAID in Timor-Leste, which they hope to accomplish by improving the business climate and improving the market through increased production and product diversification. This strategy assumes that the largest impediment to economic growth and increased employment and income in the private sector is an inadequate focus on agricultural and private sector development and growth. Based on this presumption, the United States has supported the TL government to implement reforms to enhance private sector development. In the agricultural sector, which accounts for 80 percent of the Timorese economy, the USAID approach is to help farmers compete in the “liberalized economy.”

Another U.S. strategy has been to support the government’s policy on property rights. From the USAID’s view, “undervaluation of land” is one of many problems that developing countries like Timor-Leste face. Like the World Bank, the U.S. government believes that uncertainty surrounding land ownership is one of the main constraints on private investment. Therefore, USAID’s main strategy is to increase the value of land and make it more attractive.

One way of doing this has been to assist the Land and Property Directorate to establish legislation and policies on land dispute mediation, land registration, title restitution, and constitutional compliance. Another strategy is through the Ita Nia Rai (Our land) program. Ironically, although USAID calls it “land reform,” this program is very different from the conventional understanding of land reform. Contrary to most land reform, which aims to redistribute land to landless peasants, USAID’s strategy does not. Instead, the land registration program only registers land claims. USAID believes that this registration process will increase the value of land and help attract private investment.

The land issue, which is very important and complex, sometimes becomes a source of inequality and conflict. Current land ownership is the legacy of colonialism and military occupation. During the colonial period, the local kings or people who cooperated with the colonial government pushed many people off their ancestral land and then wrote this newly unequal dispensation into law. The violence that occurred in 1999 and 2006 also displaced people from their homes. As a result, the structure of land ownership is very unequal. To support a just and democratic society, the United States should help the Timorese government redistribute land rather than perpetuating the current inequality in land ownership.

USAID’s long-term economic prescription heavily focuses on the private sector. To USAID, the Timorese government’s role is merely to create conditions for the private sector to flourish. The U.S. government has pursued similar strategies in many other post-conflict countries. These policy prescriptions will help make Timor-Leste dependent on foreign investment and an export-oriented economy. Instead of solving the structural problems of underdevelopment and economic backwardness rooted in TL’s history, these U.S.-supported strategies merely cement social inequality, marginalize local economic actors, and reduce the state’s authority in this post-conflict country.

This emphasis on private rather the public investment has also translated into the current Timor-Leste government reducing taxes. The World Bank praised Timor-Leste’s trade policy as “one of the most liberal trade policy regimes in the world.” This policy reduces the government’s domestic revenues and increases its dependence on oil exports. However, this is in conjunction with USAID’s approach, which is to encourage expansion of trade and investment through a free market system, a non-discriminatory investment regime, and access to bilateral and regional markets. Also, part of USAID’s mission is to work closely with the World Bank to improve the country’s business environment. But this “open trade policy” does more harm than good for Timorese economic actors. Timorese farmers are barely able to compete with the influx of imported goods from other countries, and they find themselves marginalized more and more within their own country. This strategy also increases Timor-Leste’s dependence on imported goods, especially from Indonesia.

The U.S. government has provided hundreds of millions of dollars in aid to help Timor-Leste become a democratic and prosperous society. But this aid has come with policy strategies that contradict U.S. rhetoric or lead to results that are unjust, undemocratic, and ultimately unhelpful for the majority of the people of Timor-Leste.