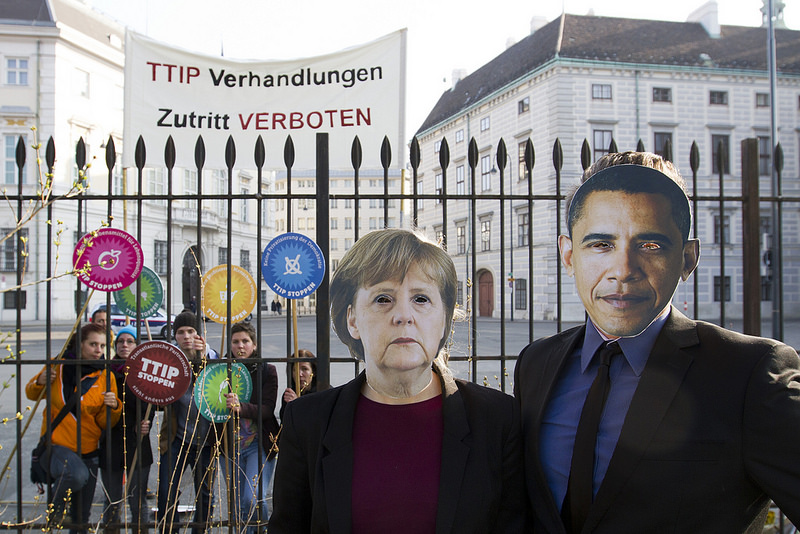 A proposed U.S.-EU "free-trade" agreement is much less about reducing tariffs and more about weakening the power of average citizens to defend themselves against corporate labor and environmental abuses. (Flickr: Global2000 / Flickr)

Earlier this month in Brussels, U.S. and EU negotiators held a fourth round of secret talks on the proposed Transatlantic Trade and Investment Partnership (TTIP). The agreement would remove so-called “trade barriers” between the United States and Europe by eliminating tariffs and weakening the regulatory authority of nation states.

The talks in Brussels come on the heels of a new public relations push by the Obama administration. In February, U.S. Trade Representative Michael Froman, speaking at the Center for American Progress (CAP), outlined the administration’s new “values-driven” trade agenda. Ostensibly stronger on labor and environmental standards, the approach promises to boost job growth at home by removing foreign tariffs on U.S. exports.

Given that already ballooning corporate profits have not created a U.S. jobs boom, an increase in corporate export profits is unlikely to help. What’s more, recent trade agreements have failed to increase U.S. exports in the first place.

But engaging this argument misses the real issue. TTIP is much less about reducing tariffs, which are already fairly low between the United States and the EU, and more about weakening the power of average citizens to defend themselves against corporate labor and environmental abuses.

The key issue on this point is a controversial TTIP provision called Investor-State Dispute Settlement (ISDS). ISDS allows foreign corporations to sue governments before special international tribunals over domestic laws that interfere with corporate profits. The tribunals are not accountable to any national public or democratically elected body. Corporations around the world are using similar ISDS provisions under existing trade agreements to extract taxpayer money from national governments. Actual or potential government losses then serve as strong deterrents to future public interest legislation.

At CAP, Froman accused trade critics of being stuck in the past. Trade policy has “evolved” substantially since the 1990s, he said, and new trade agreements will not only take into account labor and environmental concerns, but will actually raise standards.

The opposite is true. As corporations have become more adept at exploiting provisions like ISDS, trade agreements are getting worse for the rest of us. And the same corporate interests responsible for previous bad agreements are still in charge. Of the 700 U.S. trade advisers who have exclusive access to negotiators and draft agreements, 90 percent represent private industry. Less than 9 percent come from labor, health, consumer, or other public advocacy groups. Meanwhile TTIP talks remain closed to the public with limited press access.

The “free trade” threat to regular Americans is no longer just economic, but political as well. Out of public view and under the influence of global corporations with little to no national loyalties, negotiators are trading away our most fundamental values: representative democracy and the rights of citizens to protect themselves.

President Obama has asked Congress to renew so-called “fast-track” negotiating authority, which expired in 2007. Fast-track empowers the executive branch to negotiate trade agreements like TTIP in secret before sending them to the Senate for an up-or-down vote, with only a simple majority required for approval. Unable to filibuster or offer amendments, senators could not remove provisions such as ISDS.

But opposition to Fast-Track is growing on both sides in Congress. Senate Majority Leader Harry Reid (D-NV) and 151 House Democrats have voiced their opposition. Even reliably pro-free trade Republicans are weighing in against it. Elsewhere, public outcry in Europe over ISDS has forced EU Commissioner for Trade Karel de Gucht to open a three-month public comment period on the issue. U.S. advocacy groups have called for a similar move here.

Now is an opportune time for Americans to voice their concerns. Tell your representatives in Congress to oppose fast-track authority and demand that U.S. Trade Representative Froman open a public comment period on ISDS. By weighing in now, Americans can put an end to the disastrous era of “free trade” agreements negotiated in secret for the sole benefit of global corporations and their super-rich investors. The rest of us have suffered enough economic pain from these agreements. We must not suffer the final indignity of losing our democracy to them as well.

Foreign Policy In Focus contributor Andrew Erwin is a scholar and activist. He has held faculty appointments at Bowdoin College and Cornell University.