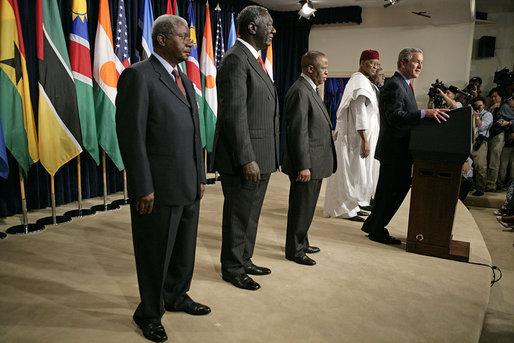 Trading with the Enemy 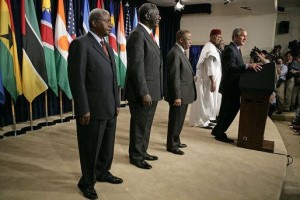 The last decade has seen a remarkable surge in U.S. economic interest in the continent of Africa. Policymakers who once considered Africa the languid backwater of global economics are now rushing in to stake a claim in the continent’s enormous resource endowment. Most of this effort operates with a rhetoric focused on “partnership” and “development,” with the vision of using US trade and investment to lift Africans out of poverty. U.S. Secretary of State Hillary Clinton exemplified this attitude when she spoke last year at a US-Africa trade policy forum, saying, “Let’s help each other make Africa all that it can be.”

But a quick look at the trade policy itself shows that this sugary rhetoric of American benevolence and concern for African welfare is deeply misleading. It does little more than cloak an agenda firmly rooted in economic realpolitik. Michael Battle, the U.S. Ambassador to the African Union, has revealed the blunt urgency of this agenda in a candid but troubling statement: “If we don’t invest on the African continent now, we will find that China and India have absorbed its resources without us, and we will wake up and wonder what happened to our golden opportunity of investment.”

The centerpiece of U.S. trade policy for Africa is the African Growth and Opportunity Act (AGOA). Signed into law by President Clinton in 2000, AGOA is, according to Congress, “perhaps the most significant American initiative on Africa in our country’s history.” It provides trade preferences for duty-free entry into the United States for certain goods from sub-Saharan Africa, which is touted as a way to boost African business by encouraging exports. President Bush signed the AGOA Acceleration Act of 2004, which extends the policy until 2015.

It’s hard to quarrel with the idea that reduced trade barriers around American markets would be a boon for African exporters. The quintessential example is Lesotho, whose textile industry has flourished since joining AGOA and now exports more than $400 million worth of garment manufactures to the United States annually.

But there’s a catch. The U.S. president reserves the right to reevaluate each country for AGOA eligibility on an annual basis; 41 made the cut last year. In order to qualify, African countries have to meet a specific set of stringent “conditions.” Topping the list is the requirement that the beneficiary promote “a market-based economy that protects private property rights… and minimizes government interference in the economy through such measures as price controls, subsidies, and government ownership of economic assets.” In addition – and here’s the big one – the beneficiary must make progress toward “the elimination of barriers to United States trade and investment.”

In other words, AGOA eligibility requires not just mild economic deregulation but the outright destruction of any and all tariff protections, flinging open African markets to a flood of American goods that inevitably undermine local industry. And African countries don’t really have a choice in the matter, for if they refuse to meet these conditions, they effectively forfeit their access to the American market. For all of the positive spin that U.S. policymakers put on AGOA, nobody ever so much as mentions these draconian measures, which are easily as destructive as the dreaded “structural adjustment” conditions that the International Monetary Fund attaches to its loans. Essentially, AGOA amounts to a coercive free trade agreement with most of the subcontinent.

Given that AGOA requires its beneficiaries to eliminate barriers to U.S. investment, it’s not surprising that the balance of trade comes out strongly in favor of the United States. Trade data shows that Benin, for example, has exported almost nothing to the United States since it became an AGOA member, but has imported some $600 million worth of U.S. goods that have significantly undercut local producers. Some countries do actually export a great deal under AGOA rules – but only those with substantial petroleum and mineral deposits. Take Angola, for instance; 99 percent of all of Angola’s exports under AGOA have been energy-related. In the Congo, that number reaches closer to 100 percent. The same is true of Nigeria, Botswana, and every other country with an oil and mineral portfolio. Indeed, more than 80 percent of all exports under AGOA fall under this sector.

AGOA, in other words, is designed to pry open new markets for U.S. goods while making it easier for the United States to extract oil and minerals. And since most of Africa’s oil and minerals are controlled by Western corporations like Exxon, Shell, and Anglo-American, this is hardly an arrangement designed to benefit African businesses.

If that’s the tragedy, then here’s the farce. AGOA actually does include a number of progressive conditions for membership. In order to qualify, beneficiaries must develop “economic policies to reduce poverty,” uphold “the rule of law, political pluralism, and the right of due process, a fair trial, and equal protection,” construct “a system to combat corruption and bribery,” and refrain from “gross violations of human rights.” In addition, beneficiaries must implement “the protection of worker rights, including the right to organize and bargain collectively, a prohibition on the use of any form of forced or compulsory labor, a minimum age for the employment of children, and acceptable conditions of work with respect to minimum wages, hours of work, and occupational safety and health.”

In practice, however, none of this actually applies. Countries renowned for corruption, human rights abuses, and labor law violations are routinely approved for AGOA eligibility. Indeed, the countries with the most flagrant abuses are those that trade the most under AGOA, giving blatant lie to the claim that good governance is a necessary precondition for successful U.S. investment in Africa. Cameroon, for example, enjoys AGOA eligibility even though the government there rules an undemocratic, one-party state, regularly obstructs political meetings, harasses journalists, tortures human rights activists, and turns a blind eye to child labor. But it has a lot of oil.

Neighboring Chad also enjoys AGOA eligibility, despite rampant corruption and a long tradition of arbitrary detentions and extra-judicial killings. But it has the Chad-Cameroon pipeline – the single biggest US investment in Sub-Saharan Africa – and Bush and Obama have been devoted to protecting the project’s U.S. investors. Eritrea is another example. In 2003, the UN named Eritrea one of the “World’s Most Repressive Regimes.” But it gets AGOA eligibility in exchange for having joined “the coalition of the willing” during Bush’s war in Iraq. Burkina Faso, Angola, Swaziland, and the Congo all benefit from similar double standards.

The issue here is not just that the United States benefits from corrupt and repressive regimes, but that while AGOA claims to create incentives for political reform in Africa, it actually does the opposite. By encouraging the deregulation of oil- and mineral-based economies, AGOA contributes to the development of “rentier states” that do not have to rely on income taxes for their revenue. Such states have no incentive to build up a strong middle class, diversify their economies, or respond to the needs of their citizens In turn, citizens have no incentive to scrutinize government priorities. As the social contract between citizens and the state erodes, endemic corruption inevitably follows, and states become increasingly repressive in order to maintain their grip on power.

This is what economists call “the resource curse” or “the paradox of plenty.” An overreliance on huge oil and mineral deposits ends up generating corruption, inequality, and widespread poverty instead of positive development outcomes. This pattern contradicts the common assumption that economic liberalization translates into political freedom or democratic reforms.

Although AGOA purports to leverage exports as a way of boosting economic development in Africa, it does not stipulate that the exporting companies must be African. Indeed, most of them are American, Chinese, and Indian. The vast majority of beneficiaries under AGOA are not impoverished Africans, but wealthy foreign corporations. Indeed, AGOA’s insistence on the elimination of local trade barriers allows U.S. companies to bid freely on things like mineral concessions and government contracts. And given that these companies have deep capital reserves, they can usually win, effectively blocking out their African competitors.

In addition, when it comes to industries like textile manufacturing, AGOA stipulates that producers must use U.S. raw materials, which effectively blocks investment in local upstream sectors. Furthermore, because AGOA requires that goods exported to the United States “originate” in the host country, Chinese and Indian clothing manufacturers frequently label their goods “Made in Kenya” and transship them to the United States through Africa to get preferential treatment. The overall effect, then, is that AGOA does not create greater market share for African companies but actively diminishes it.

One might argue that regardless of where the investment comes from, at least it creates jobs. This may be true. But AGOA does not require that the new jobs go to Africans. Indeed, many of the extractive industries that benefit from AGOA import highly skilled labor from developed countries like the United States.

In Angola, for example, most of Exxon’s engineers are Americans. Furthermore, the jobs that AGOA does create for Africans are often deeply exploitative. AGOA has encouraged the development of Export Processing Zones (EPZs) across the continent, where labor laws are nearly non-existent and wages are rock-bottom in order to attract foreign manufacturers. In the textile industry, the net effect is that Asian sweatshops relocate to Africa to take advantage of AGOA incentives. In Kenya in 2006, the average wage of EPZ workers in Asian sweatshops was a paltry 20 cents per hour, which amounts to barely more than a dollar a day – the lowest wages in the country. Most EPZ workers – the majority of whom are women and doubly vulnerable to exploitation – have to work excessive overtime just to meet their basic needs, and live in constant danger of being laid off without compensation.

It doesn’t have to be this way. With a few thoughtful changes, AGOA could be used to make trade work for everyday Africans.

First, the economic liberalization condition should be dropped. Rich countries like the United States, Britain, Japan, and China initially used tariff protections and subsidies to promote their industries in the early stages of development; it’s cruel to deny those basic strategies to African countries desperately in need of development. Second, the political reform conditions should be taken seriously, and used to leverage best practices in human rights and labor law. Third, Local Content rules should require that all U.S. investments in Africa should tier up over a set period to at least 80 percent local labor and local contracts – characterized by genuine registration – and should require investment in local capacity where it proves too poor to meet the necessary standards. Finally, targeted quotas should be used to channel foreign investment to where it’s needed most, rather than to where the regulations are most relaxed.

But changes of this order are not on the horizon, for – as I have demonstrated – the United States is concerned less about the well-being of Africans than about meeting its own energy needs and promoting the interests of American corporations. We need to cut through the deceptive rhetoric of U.S. trade policy and ask the tough questions: Who really benefits from AGOA? Does AGOA enhance welfare and development, or facilitate extraction and exploitation?

As Ambassador Battle’s statement illustrates, the present trade arrangement between the United States and Africa is eerily reminiscent of the era of colonial conquest. In 1875, as Europe set its sights on Africa’s vast riches, King Leopold II of Belgium wrote to his ambassador in London, “I do not want to miss a good chance of getting us a slice of this magnificent African cake.” It’s America’s turn now, and it appears that the Obama administration – like Bush before him – is driven by a similarly disturbing vision: a new scramble for Africa.

Jason HickelForeign Policy In Focus contributor Jason Hickel is an instructor and PhD candidate in anthropology at the University of Virginia. His research focuses on trade, development, and political conflict in Sub-Saharan Africa.