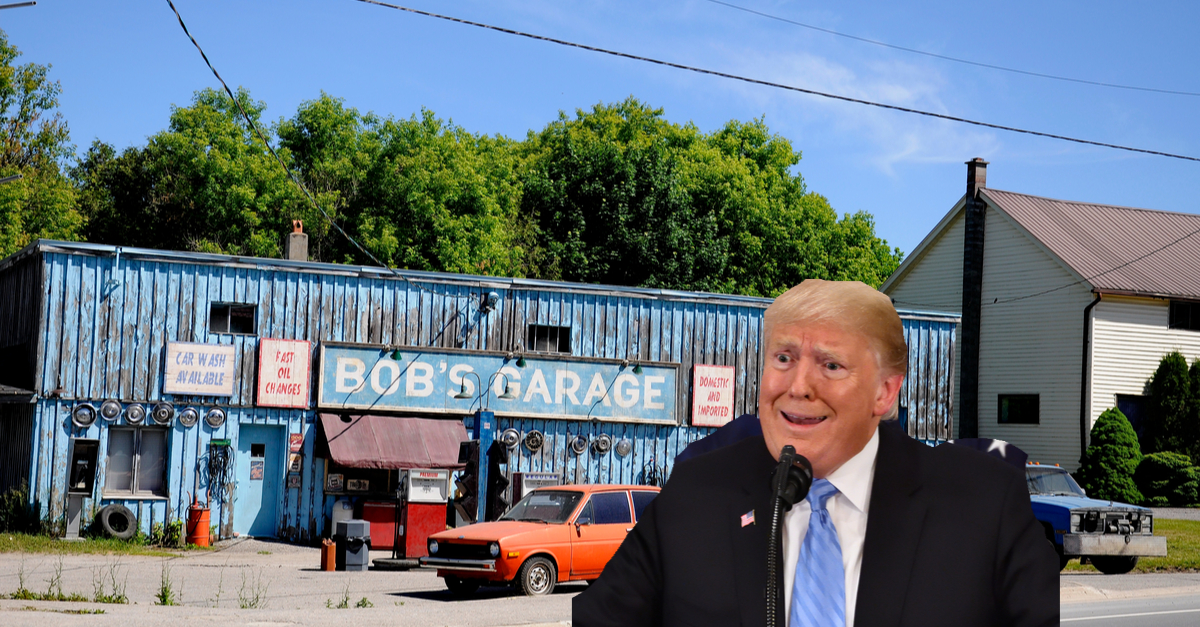 Imagining a 'Schitt's Creek'-style landing for the Trumps... in Slovenia.
By John Feffer | December 9, 2020

In Season One of the wildly popular TV series Szitsky Krik, viewers thrilled to see the delicious comeuppance of a former U.S. president and his once-glamorous wife Melania.

Having ruthlessly climbed over people to become the most powerful couple in the world, Donny and Melania are abruptly stripped of their political influence within months of a presidential election that failed to give Donny a second term. To add injury to insult, a series of lawsuits and a succession of debt collectors divest the unlucky pair of all their worldly possessions.

In a delightful TV turnaround, Donny and Melania immediately become refugees who, along with their three children, flee the country for asylum in Slovenia. There they are forced to seek safety in their one remaining asset. As a joke, Donny had once bought Melania’s ancestral hometown for $100. But it’s a joke no more! The town of Szitsky Krik, and the rundown hotel on its outskirts, is where the Trumps must now call home.

Many viewers are not aware that Szitsky Krik is a Slovenian reboot of an obscure Canadian series of a similar name. In the original series, the once-wealthy couple and their children gradually become more sympathetic as they integrate into a small town and learn how to appreciate life from the quirky but loveable denizens of that obscure part of the world.

In Szitsky Krik, on the other hand, the Trumps destroy the harmony of a small Slovenian backwater and set the inhabitants against one another. What had once been a humble and hard-working mill town is transformed by the Trump clan into a glitzy, vulgar casino destination. In one hilarious hijinks-filled episode after another, the Trumps try to rebuild their empire through lies, backstabbing, and outright criminal conduct. It’s no wonder that critics hailed the series as a Slovenian Shameless, and it quickly rocketed to the top of the list of must-see TV in 2021.

Here’s the opening scene from the first episode of Season Two, entitled “Donny’s Foreign Policy Legacy.” Donny is having a tete-a-tete with Pilov Szitsky, the erstwhile mayor of the town who signed up at the end of Season One to be the manager of the new Trump International Casino, which is nothing but the old hotel with a big bright neon sign out front.

Pilov: What do you have there, Donny?

Trump: How many times do I have to tell you, Pilov? You must address me as Mr. President.

Trump: It’s from the governor of Georgia. He is still refusing to call the election in my favor.

Pilov: But Mr. President, the election was more than one year ago!

Trump: Stolen. Everything stolen. The election. My empire. My foreign policy legacy. My spray-on tan.

Pilov: But with my help, you will get almost everything back. We are making good money with poker game in Room 5. And once I put rigged slot machines in lobby, it will be excellent cash flow.

Pilov: Gennady, owner of Good Clean Fun bar, he not happy that we sell cheaper booze. But we do as you suggest. My son Peesov whack him.

Pilov: And regional governor, he not like party girls in Room 7. But we do as you suggest. We bribe him.

PIlov: And our prime minister, Janez Janša, he is such big fan of yours. We do as you suggest. We send him 10 copies of your new book I Am Still King of the Hill with love letter attached.

Pilov: Excuse me? Is that English word I do not know?

PIlov: I am still not sure that I –

He is interrupted by the entrance of Melania, wearing an expensive dress with a jacket that says “I Don’t Give a Szitsky! Do You?” on the back. Audience applause.

Melania twirls and smiles. She sits down to do her nails. She has not uttered a single word in the show.

Trump: Now, Pilov, you are great and you are doing a great job. But there is something else I need you to do. I need you to rescue my foreign policy legacy.

Pilov: Uh, okay. You have said this to me before. But I still do not understand what this is, your foreign policy legacy.

Trump: I ended COVID-19, all around the world. I stopped the endless wars. I brought home the troops. I received the Nobel Prize for stopping the North Korean threat, bringing peace to Israel and Palestine, and exposing the myth of climate change.

Trump: Pilov, why does it sound like you don’t believe me?

Trump: I made America Great Again!

Trump’s son Eric enters the room. He is carrying an AR-15 assault rifle with a dead animal slung over his shoulder. Audience applause.

Eric: He made America great again! I watched it happen!

Trump: Whaddya got there, son?

Eric: (giggles) It’s not dangerous any more. I shot it dead!

Trump: Good boy. Tell him about my Nobel.

Eric: Daddy got a Nobel! He lets me wear it around my neck.

Pilov leans closer to read the inscription on the medal around Eric’s neck.

Pilov (reading): It says, QAnon Nobel Prize. (He turns it over) Federalist Society Man of the Year.

Ivanka: God, Eric. Will you ever grow up?

Eric: (sneers) God, Ivanka, you’ve been such a pill ever since Jared ran off with the kids.

Ivanka (ignores him): Poppa, I just received an email. It’s the Israelis. They want to fly you to Jerusalem. They’re naming a settlement after you!

Ivanka: But there’s no direct flight from Ljubljana. So, there’s a chance that we would be arrested when we change planes in Ankara.

Eric: Arrested? By who? Daddy pardoned us all when he was president.

Ivanka: God, you’re such an idiot. That pardon was worthless.

Ivanka: Shut up both of you. If anyone is going to be president in 2024, it will be me. Mitch McConnell says so, and he’s the only one who counts. Uncle Mitch says that I’m the kinder, gentler Trump, the only one who can get the votes of neo-Nazis and suburban soccer moms.

Trump: Stop talking like I’m already dead. I’m still president. That election was a fraud. I’m going to win again in 2024 and my first executive order will be to overturn the 2020 election. Which means that I’ll be the first president in American history to serve three terms!

Trump: I will be president again in 2024 and I will just have to make America great one more time.

Pilov: You mean, after President B-

All: Don’t say his name!

Eric: We call him the Devil!

Don Junior: When Satan stole the election in 2020…

Trump: The carnage is terrible. One America News Network reported today that three people became severely nauseous from the COVID vaccine. This illegal administration has literally made people sick!

Pilov: I read that only 150 people have died of COVID in America since –

Trump: They reversed everything I did in the first week in office. How can they do that? It’s not democratic!

Pilov: Is it not what you did in your first — ?

Trump: And you know what else they are doing? Negotiating with the Iranians. And the Cubans. And the Chinese. And…and…the French!

Trump: But when I negotiated with my dear friend Kim Jong Un, it was nothing but criticism. I single-handedly got rid of those nuclear weapons!

Pilov: I think they do.

Trump: Do you want to keep your job?

Pilov: (checks his phone): I look at your Twitter feed and I see that you are right. No nuclear weapons. Congratulations, Mr. President!

Trump: Now, this is what I need you to do, Pilov, to rescue my foreign policy legacy. I need you to go to Washington, D.C. and get all the papers from my first term that we somehow failed to secure.

Ivanka: Shut up, idiot boy. If you had helped us burn all those papers, we wouldn’t be in this pickle.

Trump: I did my best to tear up every document I got my hands on.

Don Junior: But then we found out, too late, that there was a “records management analyst” who was paid $65,000 a year to tape together everything that Father tore up.

Ivanka (to Pilov): You’re the only one who can safely travel to Washington to get those last papers and bring them here for safekeeping.

Trump: All the records of my phone calls with the Russians and the Ukrainians. My love letters to Kim Jong Un and Benjamin Netanyahu and Stormy Daniels. The list of all the beautiful gifts from the Saudis.

Eric: Everything mean old Jared did!

Ivanka: Shut up, you cretin! If we don’t get those papers, none of us will have a chance of becoming president in 2024. (She caresses Pilov’s cheek.) Can you do this teensy-weensy favor for us, you brave little man?

Pilov: (proud) I am honored to go to America as emissary of great Trump family. I will call my great friend Borat for tips on where to stay and who to see.

It is six days later. Everyone is back in the Trump suite. Pilov walks through the door. He is carrying a sheaf of papers.

Pilov: I am back. Here they are!

Ivanka: (kissing his cheek) My hero!

Eric: Did you bring me my favorite gumballs? And a clip for my AR-15?

Pilov: They took away gun stuff at the airport when —

Trump: Let’s focus on what’s important. Did you get all the papers?

Don Junior: How did you do it?

Pilov: I say I am official presidential historian!

Trump: (looking at the papers) But these are…these are….

Don Junior: (takes the papers) I thought you said —

Eric: (seizes the papers and starts throwing them one by one into the air) These papers are all blank!

Pilov: (looks confused) I ask for all papers connected to Donald Trump accomplishments. His foreign policy legacy. They give me this.

Ivanka: Who did you ask, you pathetic little man?!

Pilov: I go to White House!

Trump: Fire up Twitter, Ivanka. It’s time to get back to work.

Ivanka: We don’t have any money or any businesses. But we still have our brand, Poppa!

Melania (stands up and surveys the room): Enough!

The audience gasps at the first word Melania has uttered in the series.

Melania: I don’t know about you, but I am out of here. I cannot take any more of this szitsky.

But then Melania sits down again and restarts work on her nails.

Melania: (looking up) Just joking! Good news: we’ve been renewed for another season!

John Feffer is the director of Foreign Policy In Focus and the author of the just-released book, The Pandemic Pivot.