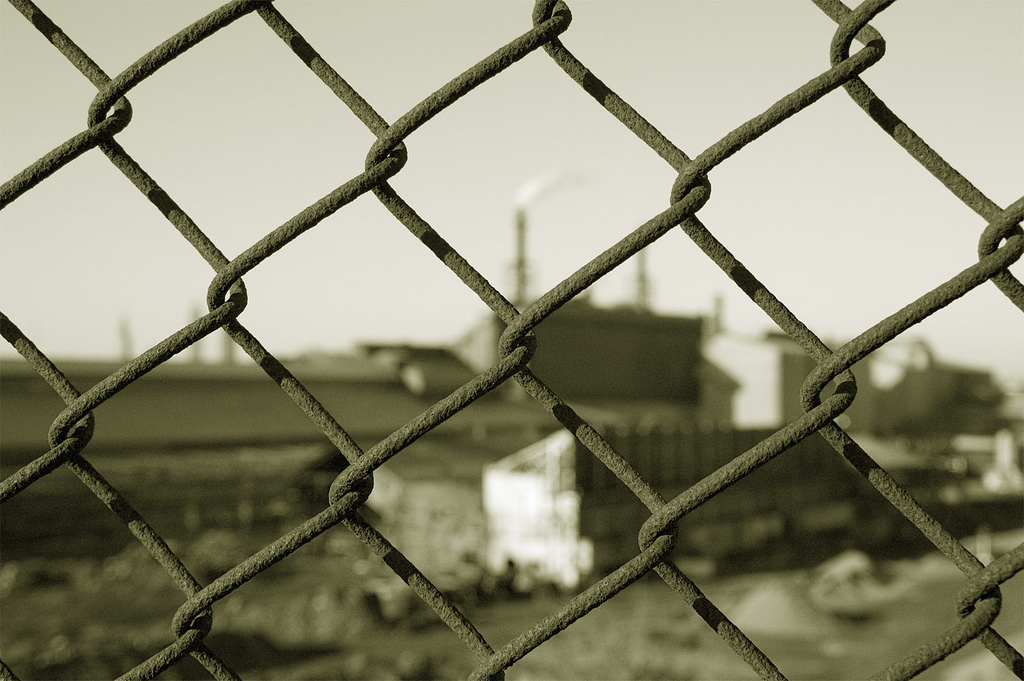 Trump wants to "renegotiate" trade deals like NAFTA. But there's no evidence he wants to fix their corrosive impact on labor protections or environmental standards.
By John Feffer | May 3, 2017

If you want to understand why Donald Trump has been changing his position on trade, one place to start is pork.

I’m not talking about the pork that goes into congressional sausage making. I’m talking the real stuff, the kind that comes from Smithfield Foods, the Virginia-based company responsible for one out of every four American pigs.

As a result of the North American Free Trade Agreement (NAFTA) — which Ronald Reagan dreamed of, George H.W. Bush negotiated, and Bill Clinton signed into law in 1993 — Smithfield Foods was able to make significant headway into the Mexican market. U.S. sales of pork to Mexico went from under $200 million in 1994 to nearly $1.2 billion in 2013.

Smithfield employs 50,000 people. It makes a ton of money. And it doesn’t want the United States to pull out of NAFTA, because then it would see a major decline in sales. Mexico, after all, was the largest pork purchaser by volume in 2015. Also, after NAFTA went into effect, Smithfield purchased a Mexican operation, CGM, that became a cornerstone of its global empire on the basis of cheaper labor and laxer environmental regulations south of the border.

Donald Trump wanted to use the 100-day mark of his presidency on Saturday to make the dramatic announcement that he was pulling the United States out of NAFTA. But lobbying behind the scenes — particularly by the U.S. Chamber of Commerce, which represents businesses like Smithfield — helped turn the president around. Also persuasive was the electoral map that agriculture secretary Sonny Perdue displayed at a White House meeting. According to The Washington Post:

Perdue even brought along a prop to the Oval Office: A map of the United States that illustrated the areas that would be hardest hit, particularly from agriculture and manufacturing losses, and highlighting that many of those states and counties were “Trump country” communities that had voted for the president in November.

Trump went into that meeting thinking about trade and came out understanding at least a little about trade-offs. Yes, NAFTA contributed to a loss of manufacturing jobs as U.S. companies relocated to Mexico to leverage low-wage labor. But those that remained behind — including the domestic branches of the same companies that outsourced jobs — profited enormously from the bump up in trade. Like Smithfield, those companies in turn employ many, many American workers.

So, instead of canceling NAFTA, Trump plans to “renegotiate” the deal. That’s become his default position on pretty much everything. The nuclear deal with Iran? Renegotiate! The bilateral trade and security deals with South Korea? Renegotiate! The budget deal with Congress? Faced with the prospect of a government shutdown, Trump reluctantly renegotiated.

Let’s go back to the Smithfield example. The influx of pork from the United States killed off many of the smaller pig operations in Mexico, throwing thousands of people out of work. “We lost 4,000 pig farms,” reports Alejandro Ramírez, general director of the Confederation of Mexican Pork Producers. “Each 100 animals produce 5 jobs, so we lost 20,000 farm jobs directly from imports. Counting the 5 indirect jobs dependent on each direct job, we lost over 120,000 jobs in total.”

So, where did many of these Mexican workers go? To the United States, of course, where they ended up using their skills at the same companies that robbed them of their livelihood in Mexico. In a 2012 piece, journalist David Bacon profiled two such displaced Mexican workers, Roberto Ortega and David Ceja.

North Carolina became the number-one U.S. destination for Veracruz’s displaced farmers. Many got jobs at Smithfield, and some, like Ortega and Ceja, helped lead the sixteen-year fight that finally brought in a union there. But they paid a high price. Asserting their rights also made them the targets of harsh immigration enforcement and a growing wave of hostility toward Mexicans in the American South.

You can draw a number of lines from NAFTA to Trump’s victory in 2016, many of them connecting the loss of jobs in Mexico to the increased migration across the border to the surge in anti-immigrant fervor in the United States. Canceling NAFTA might restrict the flow of immigrants, but it might also throw Trump country into a deeper economic funk and enrage the president’s corporate backers. As Trump said to Chinese premier Xi Jinping on a different matter, “After listening for 10 minutes, I realized it’s not so easy.” That seems to apply to Trump’s position on trade as well.

Indeed, it could be the defining quote of the Trump presidency.

There’s one more interesting fact about Smithfield that makes this story even more complicated. The Virginia-based operation isn’t an American company any more. In 2013, a Chinese firm bought it. Smithfield is still sending pork to Mexico, but it’s also feeding the ever-growing demand for meat in China. Writes Nathan Halvorsen:

The Chinese government already is dealing with looming food shortages within its own borders as tens of millions are eating more as they move from poverty into the middle class. The government is pushing Chinese businesses — both state-owned and privately held — to gobble up agricultural resources from around the world, including Africa, Europe, and the United States.

So, when Trump defends NAFTA in order to save American jobs at Smithfield, he’s also protecting Chinese corporate interests. By the way, the Smithfield sale also netted fabulous bonuses for the CEOs on both sides. Increasingly, that too has been the story of free trade. In the textbooks, trade is supposed to be an opportunity for the less well off to get a bigger piece of a growing global economy. In reality, however, free trade has been a driver of economic inequality.

Which leaves Donald Trump in a quandary. On trade issues, does he pander to his populist instincts or his plutocratic backers?

The Trade-offs of Free Trade

It can be difficult to achieve win-win results in the economy. A technological innovation like robotics will eliminate jobs but presumably cut costs for the consumer. Trump’s proposed tax reform is a boon for the rich even as it imposes additional burdens on the poor.

And so it is with trade. Those who support NAFTA, which reduced trade barriers between the United States, Mexico, and Canada, can point to statistics like the quadrupling of trade in 20 years, the lower prices for groceries, and the reduced dependence of the United States on Middle East oil (because of greater access to Canadian and Mexican sources). Devised to make North America competitive with the integrating Europeans and the surging East Asians, NAFTA has accomplished this larger goal.

Those who oppose the agreement, meanwhile, decry the loss of U.S. manufacturing jobs, the swelling U.S. trade deficit, the impoverishment of Mexican workers and farmers, and the environmental consequences throughout the three countries. In some cases, the winners and losers are clear. The U.S. auto industry, for instance, lost 350,000 jobs after 1994 while the Mexican auto industry added 430,000 jobs.

NAFTA was supposed to be Mexico’s passport to the first world, but even this flow of manufacturing southward didn’t enable Mexico to bridge the gap with its richer northern neighbors. In 2016, Mexico’s GDP per capita was $18,938, which put it on par with Gabon and Lebanon. That compares with $57,436 for the United States and $46,437 for Canada. Since 1994, both Canada and the United States have more than doubled their GDP per capita while Mexico has failed to do so (by a small margin).

In other words, Mexico has fallen even further behind since NAFTA went into effect. Examine the numbers a little more closely, and it becomes clear that Mexican workers didn’t even benefit from what gains Mexico did make during this period. Between 1994 and 2011, the productivity of Mexican manufacturing increased by 80 percent but wages and benefits dropped almost 20 percent.

Then there’s a third position: Unfettered global economic growth is no longer feasible in a world threatened by climate change. Because fuel is underpriced — given its true impact on global warming and the environment overall — that lettuce from Mexico in your neighborhood supermarket should cost more than what’s grown locally. A carbon tax applied across the board would reduce cross-border trade and boost indigenous agriculture and manufacturing. Such taxes are also permissible within existing trade rules. Canada is set to introduce a nation-wide carbon tax in 2018, based on versions already tested at the provincial level.

How you feel about NAFTA depends a great deal on who you are. Consumers and CEOs have done well, workers not so much. The same applies to any potential renegotiation. There are a number of good arguments to be made for renegotiating NAFTA to better ensure that the benefits are more widespread, for instance by strengthening the labor provisions, the food-safety protocols, and the environmental impact of the agreement — as Barack Obama promised as a candidate back in 2008 and as Sen. Sherrod Brown (D-OH) has urged more recently.

But Donald Trump’s pledge to renegotiate NAFTA starts from a different point. Trump is not interested in win-win solutions or strengthening labor provisions or making trade greener. His motto, remember, is “Make America Great Again.”

Trump’s priorities, NAFTA critic Tim Wise points out, “are prying open markets for U.S. exports and bullying Mexico into making more concessions so that fewer manufacturing jobs leave or that some might even come back.” But Mexico is unlikely to accede to Trump’s demands on trade any more than it ponied up the funds to build the infamous Wall. Mexico wasn’t placed on Earth to help make America or Americans great, a point that Donald Trump misses largely because he believes everyone was placed on Earth to make him great.

In this way, our president’s exceptional narcissism meshes perfectly with America’s noxious exceptionalism.

Donald Trump looks at the world through the dark sunglasses of a mafia don. Where others see countries, Trump sees only territory controlled by other powerful actors. He respects authoritarian leaders because they are the thugs he wishes he could be if the courts and Congress and the Constitution would all simply disappear. Our Don will make deals with these other dons, like Rodrigo Duterte of the Philippines whom Trump invited to town this week, if he sees advantage to such a truce.

With everyone else, Trump throws his weight around. He doesn’t believe in the soft power of persuasion, of diplomacy, of cultural exchange. His understanding of economics, that other tool of non-military statecraft, comes from his experience of business: sue your competitors, stiff your suppliers, and suck up to your more powerful superiors.

Trump’s not interested in “renegotiation” as a process, but only as a threat. And as long as the competitor isn’t China, which now possesses the world’s largest economy and holds America by its T-bill shorthairs, Trump is willing to risk a trade war to get what he wants. It’s not pinstriped gangsters shooting it out in the middle of a city. But the resulting trade war could be just as devastating.

And what does Trump want? He wants economic development for the United States like Nucky Thompson wants to build up Atlantic City in the TV series Boardwalk Empire. Trump’s first priority is the enrichment of a small coterie of family and supporters. If economic development happens as an unintended consequence, so be it.

As for everything else that falls outside the realm of our Founding Godfather, Trumponomics is nothing more than trickle-down, gangster-style.