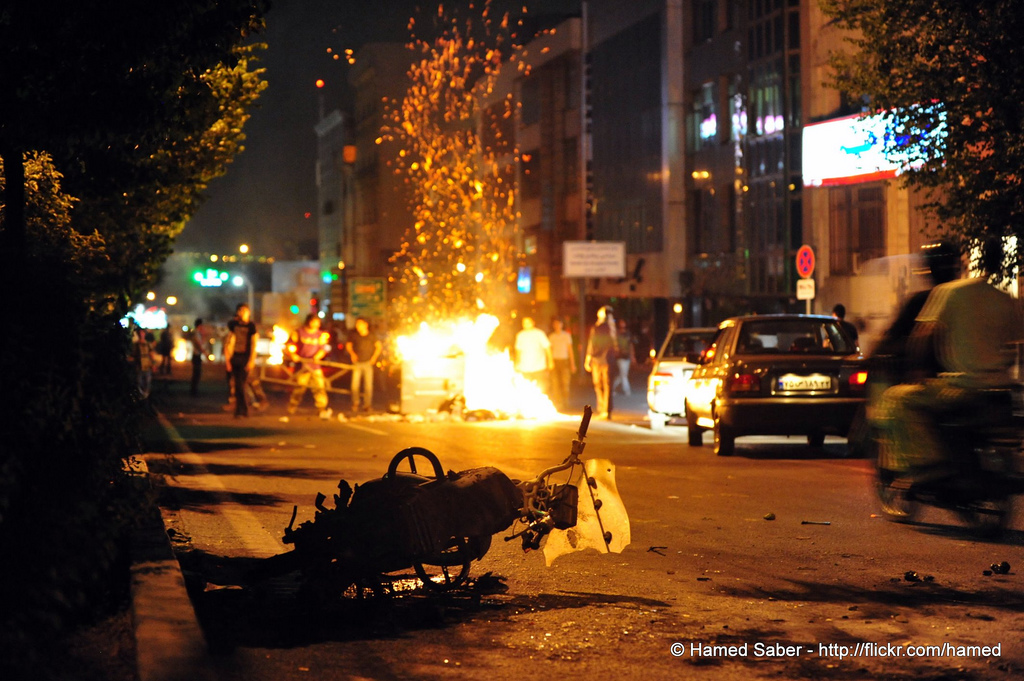 Iranians are protesting conditions worsened by U.S. policies, but Washington’s hawks see only an opportunity for regime change.
By John Feffer | January 4, 2018

The last time Iranians went out onto the streets in large numbers, they were protesting what they thought was a stolen election.

It was 2009, and hardliner Mahmoud Ahmadinejad had convincingly won the presidency with roughly 63 percent to reformer Mir-Hossein Mousavi’s approximately 34 percent. Adopting their campaign’s green color, Mousavi’s supporters thronged the streets in protest.

These Green Movement adherents were mostly middle class and concentrated in the major cities. Ahmadinejad, by contrast, attracted the support of the more religious, the less well-off and the rural—a sizable constituency that the Green Movement routinely underestimated.

Now it’s their turn to take to the streets: these members of the Iranian working class who live in the boonies, who have not benefited from the economic changes of the reformists. This is a group that analyst Esfandyar Batmanghelidj calls the “forgotten men and women” of modern Iran.

The current demonstrations are leaderless, and the demands are all over the map. In general, however, today’s protesters seem more concerned with economic issues than political ones, though the two are inextricably linked. For instance, unlike in 2009, the most recent demonstrations have nothing to do with election fraud. After all, the last presidential election went off without a hitch, and some of the same people who protested in 2009 returned to the streets in May 2017 to celebrate the reelection of reformer Hassan Rouhani.

On the economic side, meanwhile, the reformers around Rouhani promised a big boost as a result of the nuclear deal with the United States, the European Union and other countries. And, indeed, the economy has grown, mostly as a result of an uptick in oil exports. The growth rate in 2016 was 6.4 percent—a remarkable turnabout from the nearly 2 percent contraction in 2015. That certainly helped Rouhani win reelection in May last year.

But this wealth has not trickled down fast enough. Unemployment has been rising from around 10 percent in 2015 to over 12 percent today. The youth unemployment rate, meanwhile, hovers around 30 percent, which mirrors the conditions in a number of Middle Eastern countries on the eve of the Arab Spring. Moreover, large price increases in staples like eggs and gas have hit the poorer segments of society hard, and the population is bracing for more of the same in 2018.

Iranian society is sharply divided between haves and have-nots, its rate of economic inequality comparable to that of the Philippines. The current unrest reflects the thwarted economic ambitions of a falling working class, not the thwarted political ambitions of a rising middle class.

Iranians are also protesting corruption, which has long been a central feature of economic and political life in the country. There have been the predictable scandals associated with fraud in the oil industry. The earthquake in November toppled many houses built by the state, revealing corruption in the construction industry. The underground economy encouraged by the sanctions regime has also generated a pervasive culture of bribery. And many Iranians view the high salaries that go to some government employees as a form of corruption as well.

Initially, it seems, the protests originated not with reformists, like the Green Movement, but with hardliners hoping to focus anger on Rouhani. The protests broke out, for instance, in religious centers Qom and Mashhad. Writes Ahmad Sadri, “The right-wing powerful duo of the city of Mashhad, Ebrahim Raisi (the embittered rival of Rouhani in the recent elections) and his famously simple-minded father-in-law, Ahmad Alamolhoda, struck the first match by staging a small anti-Rouhani demonstration, blaming the high price of consumer goods on the Rouhani government.”

The conservatives opened a Pandora’s box of resentments. Protesters in other cities have subsequently denounced the Ayatollah Khamenei and the Revolutionary Guard. They’ve even sung the praises of the deposed shah and called for the return of his son.

This is a protest of profound disillusionment.

The Rouhani government banked on a big dividend coming from the 2015 nuclear deal.

It needed this infusion of capital from outside because, in reality, Rouhani has rather narrow room for maneuver on economic issues. The religious establishment holds all the trump cards when it comes to governance. A large state-owned sector and extensive public services absorb a large chunk of the government budget. Wages and salaries take up around 40 percent of the budget—and social security a little over 30 percent. In a “semi-state sector” bolstered by an opaque privatization process, conservative institutions like the Revolutionary Guards hold considerable sway and are often resistant to any reform.

Rouhani needed leverage from outside the system because he controlled so few levers within the system. The nuclear deal was supposed to reduce sanctions, expand Iranian exports and attract a new wave of foreign investment. Some sanctions have been lifted (but not all). Some exports have spiked (mostly oil). But the foreign investment has been slow to materialize.

True, some European firms, such as the French energy firm Total, have dipped their toes into the Iranian market. And Boeing secured a major civilian airplane deal.

But opposition to economic engagement with Iran was strong in Washington, even during the Obama administration. In the wake of their defeat on the nuclear deal, hardliners in Congress were eager to apply new sanctions against Iran and reduce what little investment was flowing toward the country. Granted, it’s not easy to navigate the business environment inside Iran. But the United States didn’t make it any easier.

The Trump administration hasn’t been shy about voicing its opposition to the Iran nuclear deal. Even before the latest protests broke out, the administration was also exploring ways of killing the Boeing aircraft deal, as well as the Total investment. Suffice it to say, Trump is not interested in any kind of engagement with the Iranian government.

As soon as the protests broke out in Iran in December, Trump gleefully took to Twitter to support the people in the streets and castigate the Rouhani government. “The people of Iran are finally acting against the brutal and corrupt Iranian regime,” Trump tweeted. “All of the money that President Obama so foolishly gave them went into terrorism and into their ‘pockets.’ The people have little food, big inflation and no human rights. The U.S. is watching!”

For Trump, the protests vindicate his argument that the government in Tehran is illegitimate. That the protests have resulted at least in part from U.S. policies to squeeze Iran is immaterial to Trump and his supporters in Congress.

This has been their strategy all along. “The policy of the United States should be regime change in Iran,” Sen. Tom Cotton (R-Ark.) has said. “I don’t see how anyone can say America can be safe as long as you have in power a theocratic despotism.” Sanctions are not designed to extract a “better deal” from Tehran or even to dissuade it from engaging in “bad behavior” in the region. That’s a canard to make the United States appear to be playing by the rules of respecting sovereignty.

The punditocracy, meanwhile, has largely come out in support of the protests, with people on both sides of the nuclear deal laying down their differences to side with the street. Here’s Daniel Shapiro and Mark Dubowitz in Politico:

We are long-time friends who have disagreed vehemently on the wisdom of President Barack Obama’s nuclear deal with Iran; Dan is Obama’s former ambassador to Israel, and Mark is one of that agreement’s most persistent critics. But we agree with equal passion that Americans, regardless of party or position on the nuclear deal, should be supporting the aspirations of Iranians to be free from their brutal and corrupt rulers.

But what are Shapiro and Dubowitz supporting exactly? By all means, the Iranian government should permit freedom of assembly. It should not respond to the protests with violence. And who cannot sympathize with people who are fed up with unemployment and corruption and want to exercise their right of self-determination?

But these protests are not the Green Movement. The current demonstrators don’t have a single, coherent program. They don’t appear to have rallied behind anything to replace the current government. They are, like the groundswell of support for Donald Trump, a movement defined by opposition to the status quo. It’s not immediately clear what alternative system such protesters would support, but it’s just as likely to be something religiously populist along the lines of Ahmadinejad as anything resembling secular liberalism.

Barack Obama received criticism from the Left and the Right for not throwing U.S. support behind the Green Movement. The stakes were clearer then—a hardline president with dubious legitimacy on one side versus a mass movement with leaders and a program. Today, the stakes are considerably muddier. But Trump, who cares so little about Iranians that he’s blocked them from entering the United States regardless of their affiliations, is interested only in the larger game: scoring points against Obama and the Iranian leadership and scoring points for Saudi Arabia and Israel.

Come January 13, when Trump has another opportunity to cancel U.S. participation in the nuclear agreement, he will likely do so in the name of the Iranian people, the very ones who have taken to the streets because Trump and others like him are determined to make sure that the agreement ultimately doesn’t provide any real economic benefits to the Iranian people. His supporters on the Right are already giving him the ammunition to gun down the deal in this way.

Trump immediately identified the protesters as his kind of people—angry at political elites, upset that economic “reforms” have not benefited them, disgusted with the corruption of the system. Trump knows a “throw the bums out” kind of movement when he sees one.

The groundswell of anger in Iran matches the rage felt by people all over the world at the greed and cluelessness of their leaders. So far, manipulative so-called populists have managed to translate this anger into electoral success—in Hungary, Russia, the Philippines and the United States. The most likely political actor to take advantage of this anger in Iran would walk and talk like Ahmadinejad and embrace positions that are more anti-American, anti-Saudi and anti-Israel than those of the current government.

Trump should be careful when he supports a movement in Iran like that, and not just because it probably wouldn’t produce a more U.S.-friendly regime. Trump is already facing something similar. After all, the president is now undeniably a member of the political elite. He’s the one implementing economic reforms that don’t benefit the vast majority. He’s the one making gobs of money off of the system. And, as in Iran, he’s the one backed by powerful religious fanatics.

In short, Trump is now the bum that a growing movement wants to throw out of the White House. When the time comes, will Mark Dubowitz and his conservative brethren similarly defend American citizens who aspire “to be free from their brutal and corrupt rulers”?