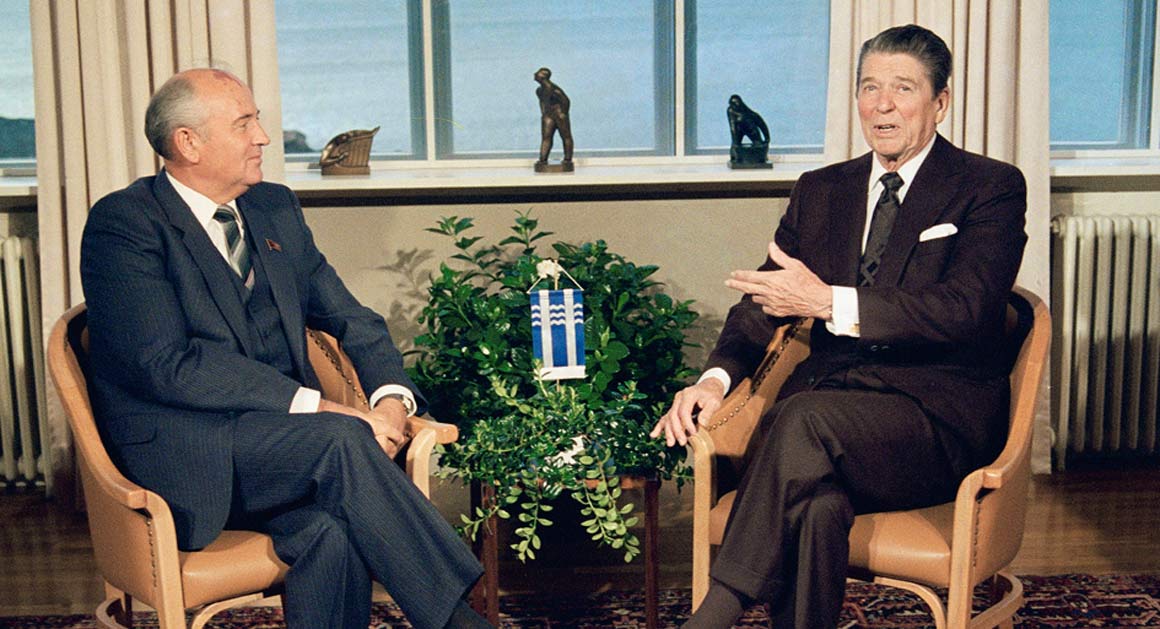 Like Mikhail Gorbachev, Trump helms a fading empire. But while the former Soviet leader supported democratization in his wake, Trump's sowing the seeds of autocracy all over the globe.
By John Feffer | July 26, 2017

Back in the late 1980s, Mikhail Gorbachev had a magic touch internationally. Traveling outside the Soviet Union, he often received the adulation that was so frequently lacking at home. When Gorbachev visited other Communist countries, crowds would turn out to welcome him as a savior.

He had that effect in Beijing when he visited on May 16, 1989. The protests in Tiananmen Square had started the month before, and the protesters saw in Gorbachev a possible future trajectory for China. According to a contemporary account in The New York Times:

The demonstrations were doubly embarrassing for the Chinese leaders because of the obvious enthusiasm that many of the protesters felt for Mr. Gorbachev. Several had prepared banners in Russian hailing him as a great reformer, and a crowd of workers and bicyclists applauded when he drove past them on his way to the Great Hall of the People.

Even more startling was his appearance at East Germany’s celebrations of its 40th anniversary on October 7, 1989. As he passed along Unter den Linden, crowds on either side of East Berlin’s famous boulevard cried out, “Gorby, help us.” Two days later, 70,000 people showed up to demonstrate, non-violently, in Leipzig. The East German regime, as Gorbachev had warned, was living on borrowed time. The Berlin Wall would fall a mere one month later.

Gorbachev made other important visits — Czechoslovakia in April 1987, Romania in May 1987, Cuba in April 1989 — that contributed to a wave of transformation that took place in East-Central Europe (though not China or Cuba). Of course, Gorbachev failed to transform the Soviet Union as he’d hoped and ended up destroying the very structure he wanted to rehabilitate. Still, he’ll be remembered for his contributions to ending the Cold War and bringing hope to many throughout the Communist world.

Now along comes Donald Trump, the head of another putative superpower desperately in need of internal reform. Trump has promised his own form of perestroika in the form of his attacks on the “administrative state.” He offers his own form of glasnost with his obsessive tweeting. Trumpeting a xenophobic foreign policy, he’s also vowed to thoroughly transform the bloc that he nominally leads.

And when Trump goes abroad, he has his own transformative effect. But while Gorbachev promoted democratization in his wake, Trump promotes exactly the opposite.

Donald Trump is the Tinkerbell of tyranny. He sprinkles pixie dust on autocracies to make them more so and on democracies so that they move ever closer to dictatorship.

Trump’s touch was on full view in Saudi Arabia during his first overseas stop as president of the free world. It was an odd choice of destinations, since Saudi Arabia is one of the key leaders of the unfree world.

But Saudi Arabia is Trump’s kind of place, where oil is king, women are submissive, no one protests on the street, and the ruling clique does pretty much whatever it wants to do. Trump seemed fully at home in this feudal kingdom, and he had nothing but praise for his hosts. While there, he also met with other autocrats of the Gulf, such as those ruling Bahrain and the United Arab Emirates.

Not long after he left, Bahrain decided that Trump had effectively given the country a green light to crack down on its opposition. A mere two days after meeting Trump in Riyadh, where the president assured King Hamad bin Issa al-Khalifa that his administration wouldn’t complicate bilateral relations with anything so trivial as human rights considerations, the Bahraini government used force to disband a nonviolent sit-in in support of the country’s most prominent Shiite leader. Five protesters died, and the authorities arrested hundreds. Then, the government shut down al-Wasat, the most prominent independent newspaper, and the Trump administration uttered not a peep of protest.

Saudi Arabia, having extracted a promise of even more U.S. military assistance with which to prosecute its war in Yemen, decided to see how far it could go to leverage its new relationship with the Trump administration. Together with the UAE, Bahrain, and Egypt, it moved against Qatar, a Gulf outlier for its relatively cordial relations with Iran and its relative tolerance for independent journalism in the form of Al Jazeera. This time, the Trump administration was divided, with Trump himself seeming to side with Riyadh while the State Department and the Pentagon stuck up for Doha, a key ally on military matters in the region.

The latest place to experience this Trump effect is Poland. Since Poland is a democracy, at least for the time being, the people fought back and produced an unexpected result.

Trump’s decision to visit to Poland just before the G20 summit was just as pointed as his choice of Saudi Arabia as a first overseas stop. The Polish government that took over 2015, led by the Law and Justice Party (PiS), has taken just the kind of stances that Trump loves: against immigration, against a free press, against the rule of law.

Poland was the perfect place for Trump to hammer home his veiled white supremacist message. Peter Beinart, in The Atlantic, contrasts Trump’s speech in Warsaw to George W. Bush speech there in 2003:

In his 2003 speech, Bush referred to democracy 13 times. Trump mentioned it once. And for good reason. Ideologically, what links the current American and Polish governments is not their commitment to democracy — both are increasingly authoritarian. It is their hostility to Muslim immigration. The European Union is suing Poland’s government for refusing to accept refugees. Among Trump’s biggest applause lines in Warsaw was, “While we will always welcome new citizens who share our values and love our people, our borders will always be closed to terrorism and extremism of any kind.” Given that Trump had linked “our values” to America and Poland’s “tradition,” “faith,” “culture,” and “identity,” it wasn’t hard to imagine whom that leaves out.

Equally important, at least for the PiS audience, was the benediction Trump gave to Poland’s leadership. Poland, Trump said, is “an example for others who seek freedom.”

Shortly after the visit, the Polish ruling party decided to remind the world of precisely what that example represents. It attempted to ram through several laws that would have severely hobbled rule of law in the country. One would have allowed the government to fire all Supreme Court justices and appoint its own replacements; a second would have given parliament, controlled by PiS, the authority to appoint members of the National Council of the Judiciary, a body designed to preserve the independence of the judiciary.

Building on earlier moves to eliminate any pesky judicial constraints on its authority, which prompted an EU “probe” into Polish actions, PiS was following a game plan devised by Viktor Orban and Fidesz in Hungary: to clear away all constitutional barriers to creating an illiberal democracy.

The surprise came when Polish President Andrzej Duda vetoed the two bills. A former PiS stalwart — he had to resign from the party when he became president — Duda was responding to an EU threat to suspend Poland’s voting rights as well as the enormous wave of protests that had washed over the country. Hundreds of thousands of Poles took to the streets in Warsaw, and many veterans of the Solidarity era, including Lech Walesa himself, spoke out vehemently against the government.

PiS was furious at this apostasy. It put enormous counter-pressure on Duda to force him to sign the third bill in the package, which gives the justice minister the power to appoint the heads of all lower courts.

The EU is nevertheless following through on its threat to begin proceedings against Poland, beginning with a legal suit filed by the European Commission against the country for breaking rules on judicial independence and sizeable fines from the European Court of Justice.

In Poland, Donald Trump sees a future trajectory for his own administration. He hasn’t yet attempted to change the laws regulating the courts because he’s been too busy packing them with right-wing ideologues, starting with Neil Gorsuch at the Supreme Court and including 27 lower-court judges (three times what Obama nominated over the same period). Trump has been woefully slow in filling administration positions, particularly at State, but he’s moved at lightning speed to transform the judiciary.

More generally, Trump’s trips to Saudi Arabia and Poland are part of a new geopolitical realignment that advisers like Steve Bannon are pushing. Forget NATO. Forget the Community of Democracies. Donald Trump wants nothing less than a worldwide suppression of liberal values such as rule of law, freedom of speech and assembly, and an independent press.

Gorbachev presided over the end of a geopolitical system — the Cold War. Popular protest — in East-Central Europe and in the Soviet Union itself — led to the unraveling of Soviet-bloc Communism as well. Trump may inadvertently preside over the end of U.S. hegemony, as both Europe and Asia chart more independent paths.

Let’s hope that popular resistance destroys his Trumpian perestroika as well, before it gets any further off the ground.