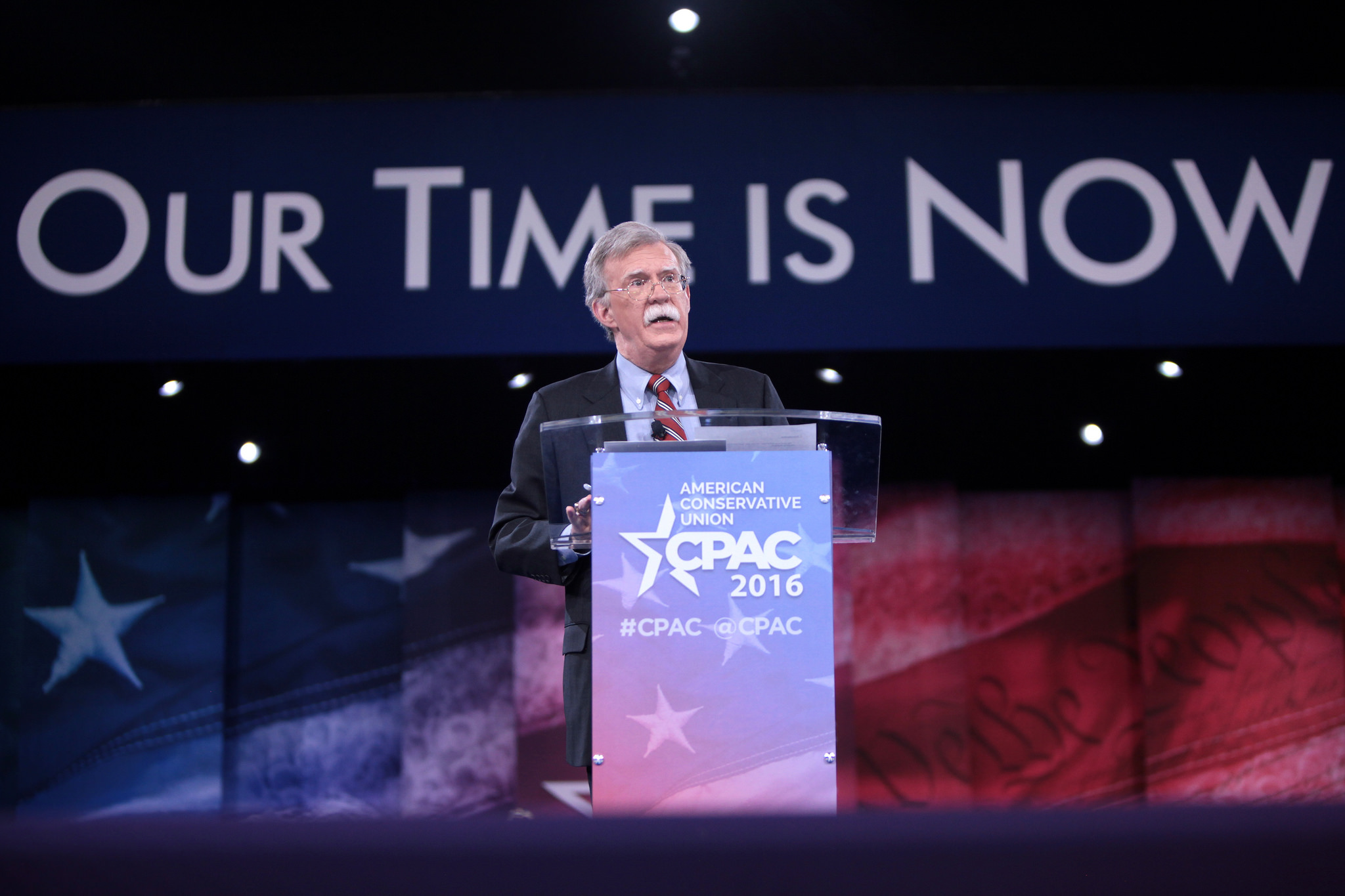 Without exception, Trump's foreign policy picks are members of the far right: aggressive, Islamophobic, and contemptuous of diplomacy.
By John Feffer | November 30, 2016

Shortly after taking office in 1969, President Richard Nixon devised his “madman theory.” It was the height of the Vietnam War, and Nixon believed that he could end the conflict. It just required a bit of unpredictability.

“I want the North Vietnamese to believe I’ve reached the point where I might do anything to stop the war,” Nixon told his chief of staff H.R. Haldeman. “We’ll just slip the word to them that, ‘for God’s sake, you know Nixon is obsessed about Communists. We can’t restrain him when he’s angry — and he has his hand on the nuclear button.’”

To convey this message that Nixon was a violent, obsessed leader, he and his national security advisor, Henry Kissinger, launched a secret bombing campaign in Cambodia. Many people in Southeast Asia — and in the United States — were convinced that Nixon was indeed a violent, unpredictable man. But the North Vietnamese didn’t back down, and the United States eventually had to negotiate a face-saving treaty and pull out.

Donald Trump has adopted his own “madman theory.” Throughout his campaign, he insisted that any potential negotiating partner — ally or adversary — must be left guessing. Toward that end, he refused to rule out the potential use of nuclear weapons, even in Europe. “We, as a nation, need to be more unpredictable,” he declared, and millions of people shuddered to think that his hand might one day on the nuclear button.

Trump tried to present this unpredictability as the philosophy that made him a successful businessman (bankruptcies aside). But the plain truth was that, when he didn’t know an answer to a question or have a ready plan of action, he covered his butt by pretending to possess a secret approach that would self-destruct if revealed. It sounded like a movie spoof. Mission Unpredictable: Trump’s Rogue Nation.

Unpredictability wasn’t just a pose. It was fundamental to Trump’s style. His late-night tweets, his bursts of anger during the presidential debates, his flip-flops on issues: these were all characteristic of a non-politician, indeed an anti-politician.

Pundits chided him for his lack of impulse control, his failure to self-censor, his impetuosity. But it was fundamental to his appeal, his very “authenticity.” His supporters didn’t know what a Trump presidency would look like exactly. But they were willing to take a chance. They voted in the same way that they might put a coin into a one-armed bandit. They knew the odds were stacked against them, but they were stilling hoping for a big payout.

In the aftermath of the election, itself an exemplar of unpredictability, Trump has again attempted to keep his audience guessing. He was “presidential” in his acceptance speech. He had a cordial sit-down with President Obama. He lay off the demonization of Hillary Clinton. He walked back some of his more extreme campaign pronouncements on climate change, the Iran deal, and waterboarding. He reached out to some unexpected candidates — Mitt Romney, Tulsi Gabbard — for cabinet positions.

Don’t be fooled by these latest manifestations of “unpredictability.” In fact, Trump has always been the most predictable of men.

He wants power. He is ruthless and vulgar. And he will do whatever it takes to win. It’s not difficult to predict the kind of foreign policy he will attempt once in office. Trump will try to grab the world by the crotch.

Unfortunately, there’s no law against sexual harassment of the planet.

The Company He Keeps

Nothing defines Trump’s predictability more than the choices for his foreign policy team. They are, without exception, members of the far right: aggressive, Islamophobic, and contemptuous of diplomacy. Trump emphasized these themes in his campaign, and his appointments so far are entirely consistent with his rhetoric. And yet some anti-war advocates are still trying to make the case that Trump is a net gain for world peace. Talk about a madman theory.

The United States, guided by its new foreign policy elite, will be a reflection of its chief executive: assaultive and unscrupulous. The best-case scenario is that Trump’s team will be incompetent, their reach exceeding their grasp. The worst-case scenarios are positively dystopian.

In the George W. Bush administration, the foreign policy team was dominated by the “Vulcans” who advised the neophyte president on how to look at the world. Within this elite circle, some moderating influences emerged — first Vulcan fellow traveler Colin Powell, then Vulcan insider Condoleezza Rice. They possessed a modicum of realism. Powell tried to persuade Bush not to invade Iraq (but then, like a loyal soldier, dutifully supported the invasion). Rice would be responsible for such initiatives as engaging North Korea through the Six Party Talks.

The overall failure of these somewhat wiser counsels to have any real impact on the Bush foreign policy speaks to the naiveté of those who favor cooperating with the Trump administration.

Taken collectively, Trump’s foreign policy picks are more martial even than the Vulcans. Mike Flynn, the potential national security advisor, wants to push regime change in Iran and is frankly delusional when it comes to Islam. Mike Pompeo, the potential head of the CIA, wants more surveillance, was sorry to see CIA “black sites” shuttered, and was the tip of the spear during the congressional attack on Hillary Clinton’s handling of the Benghazi affair (if you thought the politicization of intelligence was bad during the Bush years, wait until Pompeo is in charge).

John Bolton, Rudy Giuliani, Tom Cotton: These potential picks are ideologues who will tear through the international community like a tank at a tea party. The best that can be said about any of the foreign policy appointees so far is that they know nothing: South Carolina Governor Nikki Haley, the potential ambassador to the UN, has zero foreign policy experience (unless, like some Trump supporters, you believe that the South is actually an independent state).

In place of the evil genius of Dick Cheney, there’s Steve Bannon, the administration’s chief strategist. From his perch at Breitbart News, Bannon has pushed a racist and anti-Semitic agenda — whether he himself is either of those things is irrelevant.

Among the many malign policies he will advance, the most disturbing will be the war on Islam. The Trump administration will not play favorites — it will go after both Sunni (Islamic State, Hamas) and Shia (Iran, Hezbollah) in waging a larger civilizational campaign.

The administration might link arms on a temporary basis with strong-arm leaders — Abdel Fattah el-Sisi in Egypt, Recep Tayyip Erdogan in Turkey, or the more conservative Sunni politicians of Saudi Arabia and Bahrain — but those will just be tactical alliances to be discarded as Judgment Day approaches. They don’t want to be distracted by a cold war with Russia, for Putin is a potential Christian ally. Some on Team Trump, like Mike Flynn, even believe against all evidence and common sense that China and North Korea are aligned with the forces of Islam. This 21st-century crusade will serve as the ideological North Star for the Trump administration’s foreign policy much as anti-Communism functioned for its predecessors.

Mitt Romney as secretary of state? Tulsi Gabbard as secretary of defense? Dream on. Trump is merely gesturing in the direction of unpredictability. Romney is no moderate, while Gabbard would be merely ornamental. In the casino world of Donald Trump, the numbers are always predictable in the end, and they always favor the house. In this case, the house tilts to the extreme right.

Tom Hanks, a gifted actor but anodyne political commentator, said after the elections: “We are going to be all right. America has been in worse places than we are at right now.”

Sure, well-paid Hollywood liberals don’t have to worry about the consequences of the elections. Many communities in the United States, however, are justifiably concerned about what will happen to them on January 21, 2017. People with medical coverage through the Affordable Care Act face an uncertain future. Immigrants, documented as well as undocumented, are worried about their status. Muslims, people of color, and the LGBT community are all terrified by the dramatic spike in hate crimes in the first 10 days after the election.

Then there’s the larger world, which will decidedly not be all right. Human rights activists are anxious about the deals Trump will make with autocrats. The EU is worried about all the future Brexits — Frexit, Czexit, Nexit — that Trump will encourage. There’s the unraveling of the nuclear deal with Iran and the détente with Cuba. There’s the possibility of war with China, starting with trade and moving on from there. And if that weren’t bad enough, the next four years will be critical ones for arresting climate change, except that Donald Trump will be trying to get every last bit of coal, oil, and natural gas out of the ground.

Yeah, sure, American has gone through difficult times in the past. Donald Trump is an unpredictable fellow. It’s only four years.

But it’s not Donald Trump’s unpredictability I’m worried about. It’s his very disturbing predictability. For Trump, the presidency will be business as usual. The past is prelude, so it’s really not that difficult to predict the arc of this story.

John Feffer is the director of Foreign Policy In Focus. His latest book is the dystopian novel, Splinterlands.