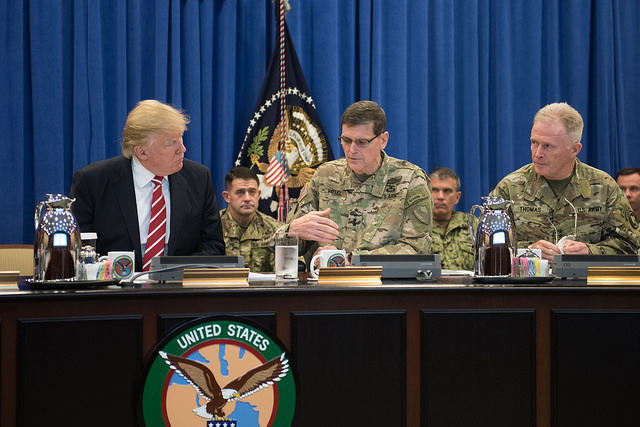 Trump: Toward War in the Middle East

By staying out of the conflicts in the Middle East, the United States can benefit both American citizens and the citizens of those distant lands.
By Adil E. Shamoo | June 29, 2017

The United States is at war in Iraq, Syria, Afghanistan, Libya, Yemen, and possibly soon in Iran as well.

Donald Trump has also sided with Saudi Arabia in its bloodless conflict with Qatar. The Saudi Arabia-Qatar standoff is no less serious than the other hot wars. The two countries are extremely wealthy and influential in the Middle East and worldwide.

Trump’s recent visit to Saudi Arabia played a role in encouraging the Saudis in their hardcore position against Qatar. Saudi Arabia and United Arab Emirate have made13 demands that Qatar must meet. The demands would make Qatar into a veritable satellite of Saudi Arabia. This conflict, too, can evolve into a bloody war.

The Middle East is in turmoil since the United States invaded Iraq in 2003. The invasion was designed to increase U.S. influence in the Middle East and intimidate countries in the region to toe the line. The goals of the invasion were to secure the oil wells to the benefit of the West under U.S. leadership; ensure the safety of our allies such as Jordan, Saudi Arabia, Egypt, and Israel; and decimate the Iraqi army once and for all to stop Saddam Hussein’s aggressive behavior in the region.

The United States, the world’s only superpower, used brutal force against a developing country. Washington also used sophisticated psychological and logistical tools to portray the Iraqi army as the world’s second largest to exaggerate its menace to the region and build up Saddam Hussein’s perception of invincibility to the level where he began to believe it. The United States also gave Hussein permission to invade Kuwait by informing him that the U.S. had no treaty to defend the Gulf state. Saddam was too stupid to see the hole the United States was digging for him, and he crawled right in.

Now comes President Donald Trump. His policies for the Middle East are similar to those of the previous two administrations but on steroids. Trump has already escalated the wars in Afghanistan, Iraq, Syria, and Yemen. When Trump sends his son-in-law, Jared Kushner, to solve the seventy-year-old Palestinian-Israeli conflict, Israeli President Benjamin Netanyahu cannot hide his happiness with the appointment. The Democrats and the media are too busy with election results, hacking, and the Russian probe to pay much attention to Middle East policy, with one exception – Israel.

Recently the Senate bowed to the wishes of Israel lobbyists and passed a bill putting more sanctions against Iran by a vote of 98 to 2. Further, a potential war with Iran is brewing. The points of conflicts are multiplying: particularly in Syria over the country’s sovereignty, the future of Raqqa, and freedom of movement in the sky. Iran wants to keep its influence in the region. Israel, along some members of the Trump administration and Congress, want the United States to do to Iran what it did to Iraq: put someone in charge of Iran who is more friendly to both the United States and Israel. A further goal is to splinter Iran and establish mini-states as the U.S. has facilitated in Iraq, Libya, and Syria.

Consider what’s going on in Raqqa, the presumed capital of the Islamic State (or ISIS) and the last real estate it controls. The battle there has produced a “staggering loss of civilian life,” according to the UN, and displaced 160,000 civilians. In Mansoura, in the west of Syria, one airstrike alone by the U.S.-led coalition killed 200 civilians when it struck a school.

The people of Middle East – and their mostly corrupt governments – face daunting challenges. They must deal with a youth bubble, unemployment, religious strife, and an educational system still struggling with pre-modern technology. Some of these challenges are due to foreign interventions. Their local governments are also to blame. As long as the region must contend with periodic invasions that upend the social, economic and religious order, the local population will not see any progress any time soon.

The United States faces monumental tasks both domestically and in foreign policy. By staying out of the conflicts in the Middle East, however, the United States can benefit both American citizens and the citizens of those distant lands.

Adil E. Shamoo is an associate fellow of the Institute for Policy Studies, a senior analyst for Foreign Policy in Focus, and the author of Equal Worth — When Humanity Will Have Peace. His email is ashamoo@som.umaryland.edu .