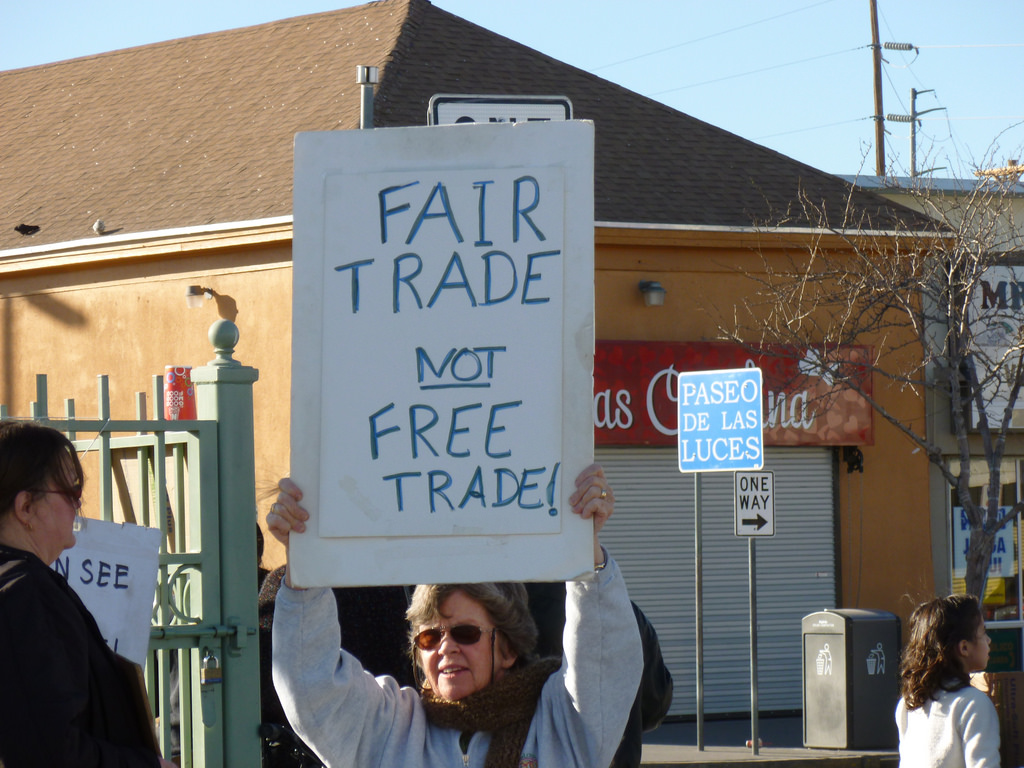 Trump and Trade: The Perils for Agriculture

Donald Trump has taken aim at free trade agreements. What could renegotiation look like?
By Karen Hansen-Kuhn | January 10, 2017

The news is full of efforts to read the tea leaves of incoming President Trump’s startling and somewhat erratic pronouncements on the North American Free Trade Agreement (NAFTA). NAFTA was a bad deal, he says, and as a consummate dealmaker, he will tear up the existing agreement and get America a better deal. Perhaps he’ll raise tariffs across the board, sending up trial balloons of 5 or even 10 percent tariff hikes. Perhaps he’ll go after currency manipulation, although that hasn’t really been an issue so far with Canada or Mexico.

What ties together all of these edicts is that they are simplistic, blunt instruments to fix complex problems. In the case of NAFTA, for example, trade flows among the three countries have quadrupled since the agreement began. That means goods – and investments – flowing back and forth across borders to create complex supply chains. Take the example of pork production. U.S. corn and soy exports to Mexico have soared, as has domestic and foreign investment in industrial-scale pork production. U.S. pork production has also increased, using the same cheap feeds, much of which is exported to Mexico and other countries.

According to a superficial explanation, U.S. farmers must be relatively better at producing animal feed and hogs than their Mexican counterparts. Consumers should benefit from lower prices, so all must be well. But look more closely at that rosy picture and the festering dysfunctions come into view. Millions of Mexican farmers lost their land after NAFTA, driven from their communities to seek work in cities in Mexico and the United States. Consumption of cheap meat, highly processed foods, and dairy products spiked in Mexico too, resulting in dramatic increases in obesity rates.

On the U.S. side, oft-repeated assertions that increasing exports would save the farm have turned out to be flatly wrong. Or rather, wrong for family farmers and entirely right for agribusinesses. Any way you look at it, corporate concentration in U.S. agriculture has increased dramatically over the last two decades, as companies nimbly shift various aspects of production around the world, protected by trade rules on tariffs, food safety, intellectual property rights, and investment. The U.S. Farm Bill programs that more or less hold that system together have not resulted in healthier foods or strong rural economies but instead have contributed to rising rates of dumping of cheap farm goods overseas.

Untangling this mess so that trade rules actually contribute to thriving rural economies and healthier food and farm systems will require a lot more than the blunt instruments of raising tariffs or inane suggestions to ban immigrant workers. On the other hand, the complexity of trade rules proposed in deals like the Trans Pacific Partnership (TPP) shouldn’t mask the clear intentions behind those rules. Although Robert Lighthizer, Trump’s nominee for U.S. trade representative, has been critical of past trade deals, Public Citizen has pointed out that many of the other appointees who will be deeply involved in trade policy were strong TPP supporters.

Trump claims that NAFTA and other existing trade deals have failed. They haven’t for their proponents. The rules were specifically designed to help big global firms remove regulations and programs that might limit their profits, whether in the U.S. or overseas. The entirely foreseeable increases in income inequality and environmental degradation were not accidents. Rather, the deal’s proponents simply saw those effects as unavoidable or even unimportant.

The real story of recent changes in the trade debate is that organizations representing workers, the faith community, the environment, public health, and family farmers stood up and said no, translating tradespeak into plain, if shocking language. Terms like “Investor State Dispute Settlement,” for example, sound vaguely benign. But this mechanism in trade deals like NAFTA in fact sets up unaccountable private tribunals of trade lawyers to enable companies to extract hundreds of millions of dollars from governments over public interest regulations such as cigarette labels, controls on toxic wastes from gold mines or the recent corporate lawsuit challenging the rejection of the Keystone XL pipeline. These agreements were never about “free” trade in the first place.

So if the new administration were serious about righting the wrongs of trade policy, a first reasonable step would be to eliminate some of the worst aspects of current trade deals, starting with Investor State Dispute Settlement. There is no reason such disputes cannot be resolved under existing national judicial systems.

There is a very real danger that any efforts to renegotiate NAFTA could make it much worse, including for food and farm systems, if negotiators rely on new proposals from other failed trade deals. TPP provisions to tighten agribusiness controls over seeds and plant varieties or to speed up approvals of imports of biotechnology products using data hidden as confidential business information would give farmers fewer options over their seeds. Similarly, “innovations” on regulatory cooperation in the stalled Transatlantic Trade and Investment Partnership (TTIP) would undermine local efforts to ban toxic pesticides or to clean up noxious manure lagoons from factory farms.

If, in fact, we want better deals, we need new rules. U.S. groups such as the National Family Farm Coalition, Rural Coalition, National Farmers Union, Western Organization of Resource Councils, Food & Water Watch, and the Institute for Agriculture and Trade Policy have come together to discuss what really should be on the agenda if NAFTA were to be replaced with a different agreement with the goal of increasing living standards in all three countries. These conversations are happening in Mexico and Canada as well.

It’s hard to be optimistic that NAFTA renegotiations will go well. A key early indication will be whether the Trump administration continues the current practice of secretive negotiations among corporate advisors or if it begins with a thorough, open, and democratic assessment of NAFTA that involves both rural and urban communities, including farmers. If the agreement includes provisions related to agriculture, the overall goal should be to support fair and sustainable rural economies and food supplies.

A Better Deal for Farmers and Consumers

Trade and farm policy go hand in hand. Both should ensure that farmers are paid fairly for their crops and livestock. The current U.S. Farm Bill is almost entirely geared to growth in international exports in order to raise incomes for farmers – an approach that has dramatically failed, with farmers now experiencing the third consecutive year of low prices. Discussions on the Farm Bill will likely heat up in 2017, but in the meantime, the U.S. could stop trying to dismantle other countries’ efforts to support their farming communities. These issues are mainly being debated at the World Trade Organization, but frank discussions with NAFTA partners on more sensible joint approaches for food reserves or other efforts to minimize wild swings in prices or supplies would be a welcome step.

The U.S. could also press its NAFTA partners to abandon their challenges to Country of Origin Labeling for meat. A pledge to take on this issue appeared in early drafts of Trump’s NAFTA plans, but seems to have been discarded for now. Canada and Mexico won a WTO challenge of a U.S. program that required the same kinds of disclosure typically required for fruits and vegetables. A survey commissioned by the Consumer Federation of America found that 90 percent of Americans want to know where their meat is from. Accurate information is an essential component of well-functioning markets. Current trade rules prioritize trade flows over consumers’ right to know what’s in their food. That simply has to stop.

It’s easier to see what needs to be removed from current trade policy than to see how the trade rules themselves can proactively help advance food security and rural livelihoods. Most of the reforms that need to happen in our food system – whether in a community, a nation, or on the global scale – must start with local conditions and priorities. This will become increasing clear as climate change destabilizes weather, disrupting global supply chains and making massive, single-crop production more vulnerable. A recent study co-authored by an MIT economist found that increasing crop diversity within countries is likely to be much more important in confronting climate change than relying on trade to make up for declining productivity. The idea that we should build up from what farmers know about their soil, weather, and local markets to feed their families and their nations is at the center of the global movement for food sovereignty. Trade policy should support that process, not create new obstacles.

It is impossible to know now whether Trump’s campaign promise to renegotiate NAFTA will result in any substantial improvements, and there’s every reason to question what the three governments might eventually decide to do. But there is also no reason for the civil society movements that defeated the TPP to allow other interests to set the agenda on NAFTA.

Karen Hansen-Kuhn is the director of trade and global governance at the Institute for Agriculture and Trade Policy.