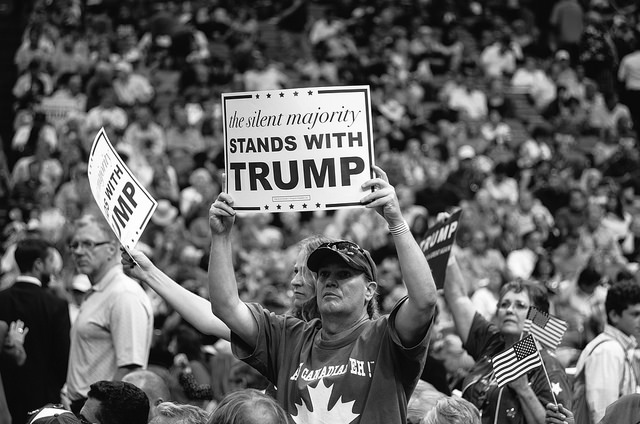 Trump and the Transformation of Politics

Illiberal populists all over the world are benefiting from three simultaneous backlashes.
By John Feffer | August 23, 2016

The history of political parties is rather boring. Not much has changed since the French Revolution, which produced the the terms “Left” and “Right” to reflect where people sat in the National Assembly. The early 20th century saw the rise of Communist parties on the far left. Shortly later, fascist parties began to emerge on the far right. Aside from these challenges from the margins, most countries have produced some version of a conservative (Christian Democrat, Republican) party and a liberal (Labor, Social Democratic) party. These parties have alternated in power, sometimes even ruling in coalition.

The one major innovation of the last 50 years has been the Green Party. Starting in Australia but achieving greatest prominence in Germany, Green parties have been both conservative (in terms of preserving the environment) and radical (in challenging economic orthodoxy). There are Green parties in 90 countries around the world. They have participated in several European governments. But they have not fully transformed politics. The traditional liberal and conservative parties have simply made a little room on the political spectrum for their Green colleagues.

Now, however, this stable political order seems on the verge of collapse.

All over the world, people in democratic societies have grown disgusted with politics as usual. The rise of Donald Trump, who has focused the anger of Americans at the elites in both major political parties, is mirrored by similar populist leaders elsewhere: Viktor Orban in Hungary, Vladimir Putin in Russia, Jaroslaw Kaczynski in Poland, Marine Le Pen in France, Nigel Farage in the UK, Rodrigo Duterte in the Philippines, Daniel Ortega in Nicaragua, Narendra Modi in India.

These leaders call themselves different things – left, right, socialist, nationalist. They also all function within democracies. But they all share one thing in common. They are “illiberal.”

Illiberal politicians are not very interested in civil liberties. They will manipulate the rule of law to “get things done.” They tend to appeal to religious or national identity rather than political ideology. They also generally favor greater state intervention in the economy.

In short, they defy the usual political categories.

If Donald Trump weren’t so personally unpopular and so tactically inept, he might be able to join the ranks of these successful illiberal leaders. Still, he has gotten as far as he has – seizing the nomination of a major political party – by articulating the same anger and resentment as the others.

Trump and the other illiberal populists have been benefiting from three overlapping backlashes.

The first is cultural. Movements for civil liberties have been remarkably successful over the last 40 years. Women, ethnic and religious minorities, and the LGBTQ community have secured important gains at a legal and cultural level. It is remarkable, for instance, how quickly same-sex marriage has become legal in more than 20 countries when no country recognized it before 2001.

Resistance has always existed to these movements to expand the realm of civil liberties. But this backlash increasingly has a political face. Thus the rise of parties that challenge multiculturalism and immigration in Europe, the movements throughout Africa and Asia that support the majority over the minorities, and the Trump/Tea Party takeover of the Republican Party with their appeals to primarily white men.

The second backlash is economic. The globalization of the economy has created a class of enormously wealthy individuals (in the financial, technology, and communications sectors). But globalization has left behind huge numbers of low-wage workers and those who have watched their jobs relocate to other countries.

Illiberal populists have directed all that anger on the part of people left behind by the world economy at a series of targets: bankers who make billions, corporations that are constantly looking for even lower-wage workers, immigrants who “take away our jobs,” and sometimes ethnic minorities who function as convenient scapegoats. The targets, in other words, include both the very powerful and the very weak.

The third backlash, and perhaps the most consequential, is political. It’s not just that people living in democracies are disgusted with their leaders and the parties they represent. Rather, as political scientists Roberto Stefan Foa and Yascha Mounk write in the Journal of Democracy, “they have also become more cynical about the value of democracy as a political system, less hopeful that anything they do might influence public policy, and more willing to express support for authoritarian alternatives.”

Foa and Mounk are using 20 years of data collected from surveys of citizens in Western Europe and North America – the democracies with the greatest longevity. And they have found that support for illiberal alternatives is greater among the younger generation than the older one. In other countries outside Europe and North America, the disillusionment with democratic institutions often takes the form of a preference for a powerful leader who can break the rules if necessary to preserve order and stability – like Putin in Russia or Abdel Fattah el-Sisi in Egypt or Prayuth Chan-ocha in Thailand.

These three backlashes – cultural, economic, political – are also anti-internationalist because international institutions have become associated with the promotion of civil liberties and human rights, the greater globalization of the economy, and the constraint of the sovereignty of nations (for instance, through the European Union or the UN’s “responsibility to protect” doctrine).

The terrible irony is that the planet currently faces tremendous challenges – climate change, health pandemics, global inequality, Islamic State terrorism – that require greater internationalism to resolve. This should be the time when the disgust that people feel toward the political status quo gets channeled toward parties that pledge a much more urgent response to these global issues. Instead, the political focus is turning inward, becoming narrower and more parochial.

It’s not too late for a different kind of party to challenge the liberal-conservative political order. Such a party would prioritize the response to climate change. It would promote a sustainable economic system that doesn’t generate huge income inequality, consumer waste, and dubious public goods like warships and jet fighters. And it would embrace civil liberties and the rule of law while emphasizing the importance of civic engagement. It would speak to the disgust that people have with the political and economic status quo without shifting the blame onto the weak or retreating from the global challenges before us.

The current political order is coming apart. If we don’t come up with a fair, Green, and internationalist alternative, the illiberal populists will keep winning.