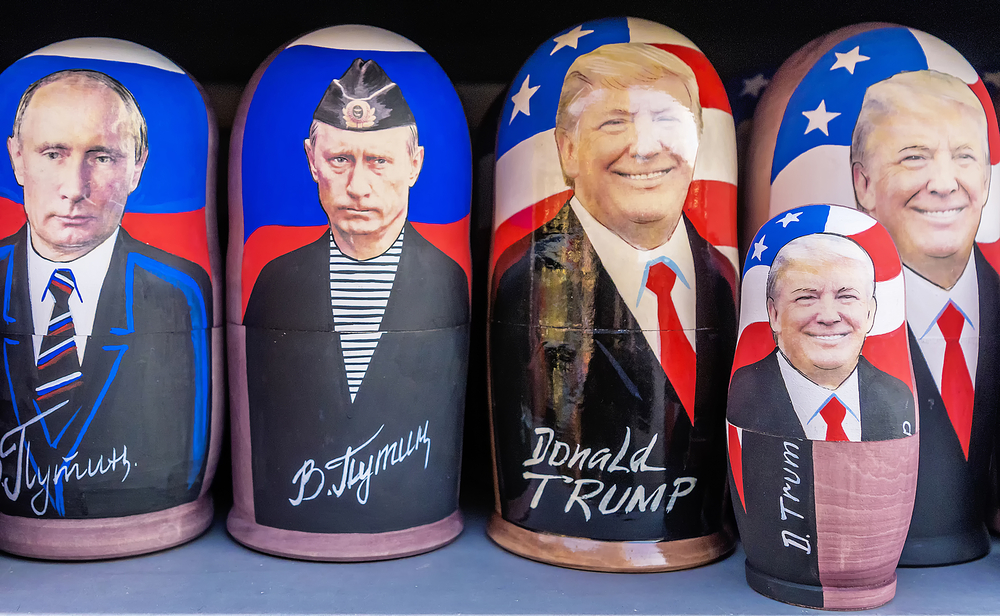 Russian money saved Trump when his projects were on the verge of collapse. Will it now be the cause of his political demise?
By John Feffer | July 25, 2018

Marty Byrde has a problem. His partner at the financial services firm has been skimming off the top of the money-laundering service they’re providing a Mexican narcotrafficker. The drug dealer responds by killing Marty’s partner.

He’s just about to put a bullet into Marty as well when, in desperation, the financial planner comes up with a cockamamie idea to move the money-laundering operation from Chicago down to the Ozarks. Bemused by this last-ditch plea, the dealer agrees. But Marty must first pass a test: he has to launder $8 million over the summer in Missouri lake country.

This is the premise of the Netflix series Ozark. It’s the perfect series for the Trump era.

And now, to understand the rise and (inevitable) fall of Donald J. Trump, it’s imperative to learn the ins and outs of money laundering.

Sure, the TV show Breaking Bad provided an introduction to the subject, but money laundering was only ancillary to the main action of producing and distributing methamphetamine. Ozark goes into the gory details of finding investments, cooking the books, churning the loot, parking it overseas, and making the final product available from ATMs the world over.

It’s a feat of alchemy, to turn bad money into good. It also mirrors the functioning of the world of finance more generally. After all, who really understands what takes place in the alembics of Wall Street? As Marty Byrde points out, as he’s considering the pros and cons of working for the narcotraffickers, he’s already been doing a form of money laundering in his day job.

That money — perhaps from Big Tobacco or Big Pharma or underpaid child laborers or land stolen from small farmers — may not have been all that clean to begin with. And Wall Street is notorious for cooking the books and finding tax dodges to shelter gains from the grasping hands of government.

But, technically, money laundering has to be connected to a crime, like the sales of narcotics or human trafficking. Illegal drugs alone account for as much as $100 billion in sales a year in the United States. Physically, that’s 20 million pounds of currency. Globally, that figure is $4 trillion — that’s nearly a billion pounds of currency. Talk about off the scales!

The billion-dollar question is: How much of that filthy lucre has circulated through Donald Trump’s business empire?

Is Trump a Launderer?

Before he became president, Donald Trump was basically an unsuccessful businessman who managed, time and again, to fail upward. He filed for bankruptcy six times — five times for his casinos and once for the Plaza Hotel.

An astounding number of his other business ventures have gone belly up too, including Trump Airlines, Trump University, and Trump Magazine.

Trump’s business failures over the years and his unorthodox financial behavior pushed him to the margins of the financial world. Only one institution, Deutsche Bank, continued to supply him with credit. Otherwise, Trump began to rely on some questionable characters and networks. He created baroque financial arrangements involving shell companies. He used pseudonyms on contracts. He became squirrely about his tax returns.

And he started to use large amounts of cash. For instance, he purchased huge properties — golf courses in the UK ($79 million), a Scottish estate ($12 million), a Virginia winery ($16 million) — in cash. In all, since 2006, he paid for properties in cash to the tune of $400 million.

It just so happens that these are all telltale signs of money laundering: the cash, the shell companies, the pseudonyms, the lack of transparency and due diligence. But let’s dig a little deeper.

In 1984, a Russian émigré with an auspicious name — David Bogatin (which roughly translates into “rich guy” in Russian) — bought five condos for $6 million at Trump Tower in Manhattan. Trump was very buddy-buddy with Bogatin at the time. But three years later, Craig Unger writes in The New Republic…

Bogatin pleaded guilty to taking part in a massive gasoline-bootlegging scheme with Russian mobsters. After he fled the country, the government seized his five condos at Trump Tower, saying that he had purchased them to “launder money, to shelter and hide assets.” A Senate investigation into organized crime later revealed that Bogatin was a leading figure in the Russian mob in New York.

A Buzzfeed investigation earlier this year found that fully one-fifth of the condos in Trump’s properties since the 1980s have been bought in cash, which allows the purchasers to avoid the scrutiny required by mortgage companies. Many of the purchasers were shell companies.

Many of the purchasers of Trump properties are Russian. A Reuters investigation last year discovered that Russian buyers purchased nearly $100 million in condos in Florida from Trump. A Russian-Canadian billionaire poured millions into a Trump property in Toronto, including a $100 million “commission” to a Moscow fixer to attract other Russian investors. In 2008, a Russian oligarch paid $95 million to Trump for a Palm Beach mansion that the Russian never subsequently occupied. It was an extraordinary mark-up for a property Trump had bought four years before for $41 million.

Of course, Trump’s shady dealings aren’t exclusively with Russians. He’s eclectic that way. He’s made deals with Kazakh money launderers, with corrupt businesses in India, and with a shady casino operator hoping to expand his operation in Vietnam.

Nor is real estate the only realm where Trump has been involved with potential money laundering. In 2015, federal authorities fined the already-bankrupt Trump Taj Mahal $10 million for violations of anti-money-laundering laws.

It wasn’t even the first time that the casino attracted the attention of federal regulators. In a 1998 settlement, which cost the operation over $450,000, the Taj Mahal was cited for breaking anti-money-laundering laws 106 times in only its first 18 months of operation.

Even here, at the Taj Mahal, the story circles around to Russia. As CNN reports, “The violations date back to a time when the Taj Mahal was the preferred gambling spot for Russian mobsters living in Brooklyn, according to federal investigators who tracked organized crime in New York City.”

Russian money saved Trump on several occasions when his projects were on the verge of collapse. Now that Trump has improbably failed all the way up to the White House, Russian money may well be the cause of his political demise.

Russia has been a money-laundering state for some time. During the Yeltsin period, the state attracted billions of dollars in Western aid, which it then laundered back overseas in Western bank accounts. Worse, powerful institutions in the West like the International Monetary Fund knew about the scam and tolerated it because it wanted to keep Yeltsin in power. The bagmen who transferred the $15 billion? Russian organized crime.

Vladimir Putin didn’t create post-Soviet corruption or the oligarch system that perpetuates it. Rather, he adapted the system to his own purposes — and for the financial benefit of his circle of friends.

The Panama Papers — the leaked papers from Mossack Fonseca, an offshore law firm — revealed the mechanisms by which Putin’s associates transferred enormous sums of money overseas in an effort to conceal assets. Putin himself is reported to have at least a $40 billion fortune, but he has also parked a lot of money in shell companies created by his associates.

Other investigations reveal how Russian oligarchs and organized crime figures (sometimes one and the same) used banks to launder their money. Last year a Danish bank shut down its Russian accounts because of money laundering that even reached into Putin’s own family. Between 2007 and 2015, the Estonian branch of Danske Bank made over 43,000 transactions to launder 7 billion euros associated with various Russian frauds.

Then there’s Deutsche Bank, the one financial institution that stuck with Donald Trump when virtually all other banks wouldn’t touch him. It even extended him credit after he refused to pay back the $330 million remaining on a Deutsche Bank loan because of the 2008 financial crisis (a global downturn that didn’t prevent him from making other investments at exactly the same time). As Luke Harding explains in his book Collusion, Trump…

paid back Deutsche with a massive lifeline — from Deutsche. Only this time he eschewed its real estate team — which wanted nothing to do with him — and got a loan from its private wealth division. This group typically deals with high-net-worth individuals, not real estate transactions, but in 2010 it not only lent him the money he owed its real estate team but also reportedly gave Trump another $25 million to $50 million in credit.

These facts might not be noteworthy if Deutsche Bank were also not becoming thick with Russian money launderers. Last year, the bank was fined over $600 million for its role in laundering $10 billion of Russian currency.

The information that could bring down Trump — and that presumably Robert Mueller is trying to obtain — may be somewhere in the Deutsche Bank files. The relevant documents would link the bank’s two most questionable financial activities — lending to Trump and washing Russian money.

Compromising information about money laundering, not lurid details about Trump’s sexual exploits, is what explains the president’s extreme deference to Vladimir Putin. As Alena Ledeneva, an expert on Russian business practices, explained to The New Yorker:

It is possible that there is kompromat in the hands of several different business groups in the former Soviet Union. Each would have bits and pieces of damaging information and might have found subtle (or not so subtle) ways to communicate that fact to both Trump and Putin. Putin would likely have gathered some of that material, but he would have known that he couldn’t get everything.

Mueller has come close. He has charged Trump associate Paul Manafort, who had his own illegal dealings with Russian partners, with money laundering. He’s gone after other Trumpsters with connections to Russia (Michael Flynn, Carter Page, George Papadopoulos).

Most critically, he’s got Trump lawyer Michael Cohen on the hook. Forget about payments to Trump’s paramours. Sex sells, but it won’t be what brings Trump down. The real reason the president is so freaked out about his lawyer’s loyalties is that Cohen is at the nexus of the Russia and finance network. Writes Jonathan Chait in New York Magazine:

Cohen has collected vast unreported sums, which were either cash-for-access functioning as quasi-bribes or straight-out bribes. Trump, frequently working through Cohen, has built inscrutable ties to worldwide criminal sources who wash ill-gotten sums through his real estate ventures.

The special counsel is not on a fishing expedition. He knows exactly what he’s looking for. The sloppiness and ineptitude of the Trump coterie — which make Nixon’s Watergate conspirators seem like Oceans 11 — virtually ensure that some evidence of wrongdoing is there. The problem is that many powerful and ruthless people are involved in different parts of Russia’s money-laundering scheme. Overcoming the pushback from those quarters may prove the most challenging part of Mueller’s job.

By the end of season one of Ozark, Marty Byrde has survived any number of near-death experiences. Netflix has renewed for a second season of mayhem in Missouri. Donald Trump has also managed to weather one scandal after another. With very low ratings and an investigation closing in, however, Donald Trump will be lucky to survive his first season in office.