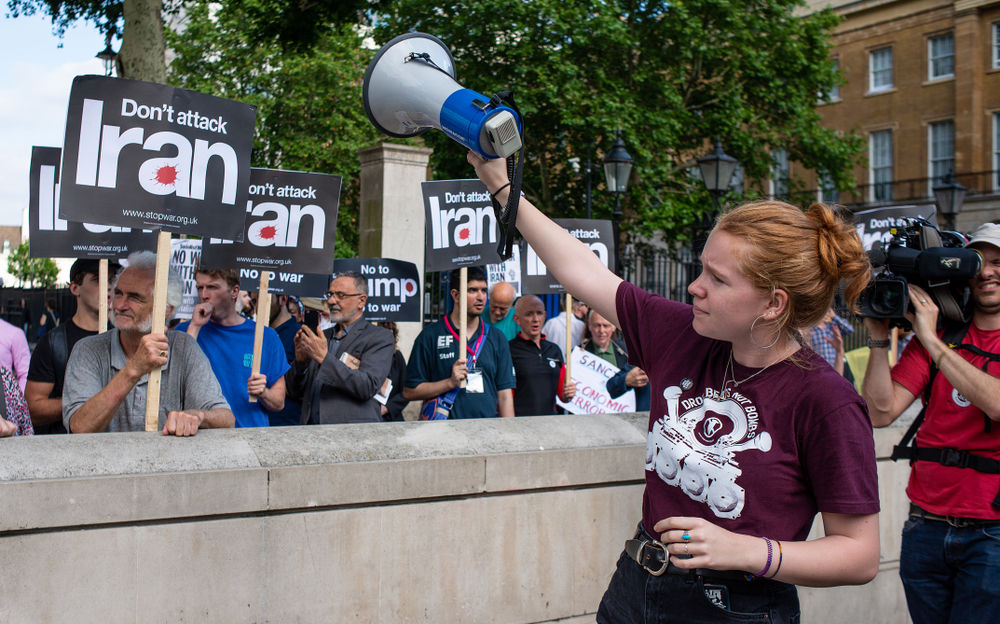 Trump is betraying his voters and threatening millions of lives. Call him on it before it’s too late.
By Peter Certo | January 3, 2020

In a full-blown U.S. war with Iran, up to a million people could die initially.

Hundreds of thousands more could die in the vacuum to follow. Millions would be made refugees. That’s the conclusion of experts surveyed by Vox reporter Alex Ward. “The worst-case scenarios here are quite serious,” Middle East scholar Michael Hanna warned.

With the brazen assassination of Iranian military commander Qasem Soleimani in Iraq, President Trump has brought us leaps and bounds closer to that conflagration — a decision Trump appears to have made while golfing at Mar-a-Lago.

Lawmakers need to move before it’s too late.

The Iranians may respond cautiously, perhaps forestalling a full-blown conflict. But there can be no doubt the White House has been driving in that direction from day one.

In a few short years, Trump has blown up the Iran nuclear deal, put a horrific economic stranglehold on the country, and sent a stunning 14,000 new troops to the Middle East since just last spring. Some 3,500 more are now on their way.

“Hope this is the first step to regime change in Tehran,” John Bolton tweeted about the assassination. Bolton may have left the White House, but clearly his spirit lives on.

What next? Get ready to hear a lot about what a “bad guy” Soleimani was, and how Iran is a “state sponsor” of terrorism.

No doubt, Soleimani had blood on his hands — he was a general. Yet after two decades of U.S. wars in the Middle East, that’s the pot calling the kettle black. It was the U.S. who invaded Iraq, started a civil war, and paved the way for a literal terrorist state, ISIS, to occupy the country afterward (a force Soleimani himself was instrumental in dismantling).

That senseless war caused hundreds of thousands of deaths, exploded the terrorist threat, and is destabilizing the region to this day. Yet somehow, war hawks like Secretary of State Mike Pompeo can go on TV and — with a straight face — predict ordinary Iranians will essentially thank the U.S. for murdering their general.

“People not only in Iraq but in Iran will view the American action last night as giving them freedom,” Pompeo said the morning after the assassination. You couldn’t caricature a better callback to Dick Cheney’s infamous prediction that Iraqis would “greet us as liberators” if you tried.

This war-mongering should be as toxic politically as it is morally. Trump rode into office promising to end America’s wars, winning him crucial votes in swing states with large military and veteran populations. Huge bipartisan majorities, including 58 percent of Republicans, say they want U.S. troops out of the Middle East.

Trump is betraying them spectacularly.

Yet too many Democrats are merely objecting to Trump’s failure to consult them. Speaker Nancy Pelosi complained the strike “was taken without the consultation of the Congress.” South Bend mayor Pete Buttigieg offered colorlessly that “there are serious questions about how this decision was made.” Others complained about the apparent lack of a “strategy.”

It’s illegal for a president to unilaterally launch a war — that’s important. But these complaints make it sound like if you want to kill a million people for no reason, you just have to go to the DMV first. As if Trump’s base doesn’t love it when he cuts the line in Washington.

Senator Bernie Sanders, who warned that “Trump’s dangerous escalation brings us closer to another disastrous war in the Middle East that could cost countless lives and trillions more dollars,” came closer to communicating the real threat.

Millions of lives are at stake. Trump’s aggression demands — and voters will more likely reward — real opposition. Call him on it before it’s too late.