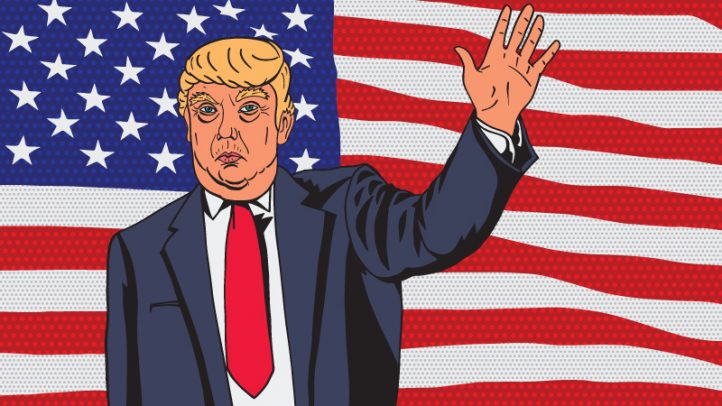 During his first year in office, Donald Trump largely ignored Latin America (except, of course, in the context of the border wall with Mexico and undoing Barack Obama’s initiatives with Cuba).

Nevertheless, over the past several months, events in Venezuela have attracted the Trump administration’s attention. While the contours of Trump’s Latin American policy remain murky, the White House has pursued his predecessor’s policy of toppling Venezuelan president Nicolás Maduro.

First, the president openly called for an invasion with his staff and foreign leaders.

Despite his aides’ pleas to avoid raising it publicly, Trump discussed the issue again during a conversation with Colombian president Juan Manuel Santos and at a dinner with four Latin American leaders in September. He supposedly informed his audience that “My staff told me not to say this…” and proceeded to ask if they favored a U.S. invasion. (They did not.) Trump also raised the “military option” with reporters outside one of his golf courses.

Luckily for Venezuelans, Trump decided against launching a foolish and illegal invasion of Venezuela. It was a narrow miss on what could have been his worst idea to date.

Our previous experiences — including in Guatemala, South Vietnam, and Iraq — have produced regimes that proved disastrous for their citizens. U.S. regime change, whether overt or covert, has created police states that have repressed their citizens and produced tremendous suffering. Venezuela could have experienced a similarly chaotic and violent episode had Trump authorized an invasion, whether led by the U.S. or conducted with the support of Washington’s regional allies, such as Colombia.

Trump’s remarks are not surprising. The United States has repeatedly attempted to undermine Maduro and his predecessor, Hugo Chávez, since 2002. Indeed, destabilizing Maduro has secured bipartisan approval in Washington.

In 2015, President Barack Obama classified Venezuela as an “extraordinary threat to the national security and foreign policy of the United States” in an executive order. Obama justified the decision because of Maduro’s persecution of political opponents, curtailment of press freedoms, and arbitrary arrests.

Maduro’s government has surely committed human rights abuses. But, so have many U.S. allies in the region, including Honduras — which produces many of the migrants the Trump administration has sought to prevent from entering the United States — without generating any calls for regime change in Washington.

Labeling Venezuela as a “security threat” borders on the sanctimonious at best, because none of these factors directly imperils the United States’ national security. And, moreover, justifying intervention in the name of democratic reform is also highly inappropriate when the government was democratically elected.

There are good reasons to be very critical of Maduro, including the recent election’s numerous irregularities. But while the opposition boycotted the vote, it nonetheless enjoyed support from Washington. Anti-Maduro organizations have received considerable funds, approximately $14 million, from the U.S. government-funded National Endowment for Democracy.

Supporting opposition candidates in foreign elections through non-state actors such as NED is also a well-established tradition in U.S. foreign relations since World War II. Such blatant internal interference reinforces one of Maduro’s talking points: that his regime represents a bulwark against a U.S. empire that actively seeks to overthrow the Venezuelan government and install a new regime.

While Trump’s reasoning for invading Venezuela remains unknown, he invoked two previous U.S. interventions in Latin America: Grenada and Panama. Beyond the fact that such an invasion would be illegal, hypocritical given the Democrats condemnation of Russian actions in Crimea, and condemned in Latin America and elsewhere, there’s simply no reason to believe invading Venezuela would be as easy as Grenada or Panama.

In the case of Grenada, the U.S. military did not even possess adequate maps of the country it was about to invade, and a series of logistical and communication issues could have proved disastrous had Ronald Reagan decided to fight a well-armed adversary. The U.S. picked on Grenada precisely because it was so small and weak.

During Operation Just Cause in Panama, the U.S. quickly decapitated its former client, Manuel Noriega, by using a series of highly-coordinated night-time attacks and overwhelming force against a vastly outgunned and relatively unpopular opponent. Panama also housed a U.S. military command, Southern Command, and so had tens of thousands of U.S. troops already stationed in country, as well as senior officers intimately familiar with Panamanian security forces.

While the Panamanian intervention is largely forgotten, those who remember it mistakenly view it as a largely successful invasion that removed a tyrant and installed democracy. But Noriega had been a U.S. client until 1986. Just Cause destroyed the National Guard, removed Noriega, and installed the winners of the previous fraudulent election. True democracy only occurred after the end of the U.S. occupation and the turn-over of the Panama Canal in December 1999.

As Trump’s remarks demonstrate, proponents of military force still view limited invasions such as Grenada and Panama as solutions for whatever foreign policy “crisis” they raise. But the numerous advantages the U.S. military had in Panama and Grenada do not exist in Venezuela, so the likelihood of replicating those “successes” there is low.

If Trump and his foreign policy advisers meticulously scrutinized the past, an unlikely event, they might realize that military interventions largely yield negative long-term consequences. If the media reports about Venezuela are accurate, it is indeed an appalling situation. Nevertheless, outside military intervention rarely solves the complex issues underlying the grievances. Rather, if often fuels more instability and violence. There are simply no guarantees that toppling Maduro would help an already volatile situation.

Brian D’Haeseleer is a contributor to Foreign Policy In Focus.