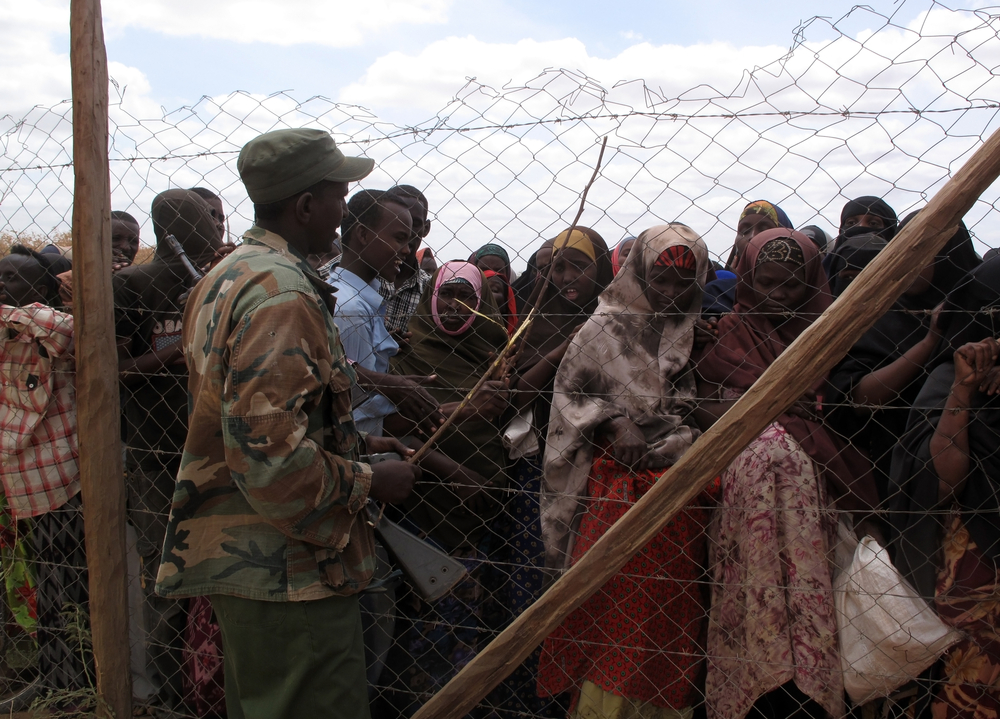 His administration’s near-ban on refugee admissions is having a destructive domino effect in front-line countries.
By Bill Frelick | May 30, 2019

Since the end of the Vietnam War, the U.S. resettlement program has provided safe harbor to more than 3.4 million refugees. This number might look large, but it represents relatively few of the millions of refugees in the past four decades who were fortunate enough to be thrown this life preserver.

Resettlement is not only about rescuing individuals. It’s a critical tool, among others, the U.S. government has used to leverage support for countries on the front lines of refugee crises, and to convince them to uphold the rights of the vast majority of refugees living in camps and ghettos who may never be resettled.

President Donald Trump’s slashing of resettlement numbers to the lowest point in the program’s history has upended the delicate burden-sharing equilibrium between the United States and front-line countries that has sustained millions of refugees during their protracted exile. Hundreds of thousands of refugee lives hang in that teetering balance.

Plummeting resettlement numbers have had an enormous impact on all refugee groups — among them Syrians, Iraqis, Afghans, and Sudanese — but perhaps on none more so than Somali refugees, nearly a million of whom live in austere and precarious conditions in Kenya, Yemen, and Ethiopia.

In Kenya, after the government announced in May 2016 its intention to close the Dadaab refugee camp, home then to 340,000 Somali refugees, U.S. diplomacy used a combination of resettlement, humanitarian funding, and other political pressures to prevent large-scale forced return to Somalia.

At the time, much of rural south-central Somalia was still under control or threat from the Al-Shabab Islamist armed group. Drought was also continuing to drive people from their homes, and the social infrastructure in Somalia, which has largely been without a state able to protect its people for three decades, was far from ready to reintegrate returning refugees.

That September, President Barack Obama spoke directly with Kenyan President Uhuru Kenyatta about the Somali refugee situation. The Kenyan record of the conversation stressed Kenyatta’s commitment to the “safe and dignified repatriation of refugees from the Dadaab camp,” whereas the White House readout emphasized Obama’s support for “long-term refugee hosting countries and in particular, Kenya’s forthcoming commitments to improve…refugee access to education.”

The day after their bilateral talk, Obama played a key role in convening a Leaders’ Summit on refugees, at which 52 leaders and senior officials pledged to increase international responsibility sharing. Obama helped to corral the richer donor and resettlement countries to increase their funding globally by about $4.5 billion, and to roughly double the number of refugees they pledged to admit. The grand bargain was for front-line countries, like Kenya, to pledge to do more to integrate refugees through education and work programs.

The United States led the donor and resettlement countries by pledging to increase its refugee admissions from 85,000 in FY 2016 to 110,000 in FY 2017 and to increase by $1 billion its contribution for humanitarian assistance, bringing its total to about $7 billion. It added funds to help countries that had not previously resettled refugees to begin doing so.

The combination of advocacy and support had a positive result: that November, the Kenyan government announced that it would allow the camp to remain open for another six months. In February 2017, the High Court of Kenya stepped in to rule the government’s Dadaab closure order unconstitutional. The following month at a special summit on Somali refugees, Kenya reiterated the pledges it had made at the Leaders’ Summit to improve refugees’ access to education.

But the Trump administration did not keep Obama’s promise to increase refugee resettlement. To the contrary, it cut it deeply.

In the last year of the Obama administration the U.S. admitted more than 9,000 Somalis. In FY 2018, the first full fiscal year of refugee admissions under the Trump administration, Somali resettlement dropped 97 percent from the previous year, to 257. In the first half of this fiscal year, the United States has admitted 27. Somalia was also one of the predominantly Muslim countries included in the Trump Administration’s “travel ban.”

In September 2018, UNHCR, the UN refugee agency, reported that the Somali situation was one of the world’s most underfunded humanitarian crises. At that time, the U.S. government’s primary aid arm, USAID, reported, “Violence also prompted significant population displacement across Somalia in 2018, with conflict and insecurity displacing approximately 320,000 Somalis during the year — the most conflict-related displacement in four years.”

At the time, the UN humanitarian appeal for the Somalia situation was just 37 percent funded. “Failure to support refugees and host communities could see a deterioration in humanitarian conditions,” UNHCR warned, “and could precipitate returns before the Government of Somalia is ready to absorb them.” This year’s appeal, as of April 2, is just 15 percent funded.

In February the Kenyan government renewed its threat to close Dadaab within six months. With waning international support and the reversed course from the United States, Somali refugees are back to the situation they faced three years ago, with a short countdown to closure of Dadaab and increasing pressure to return to a country that still represents a threat to their lives.