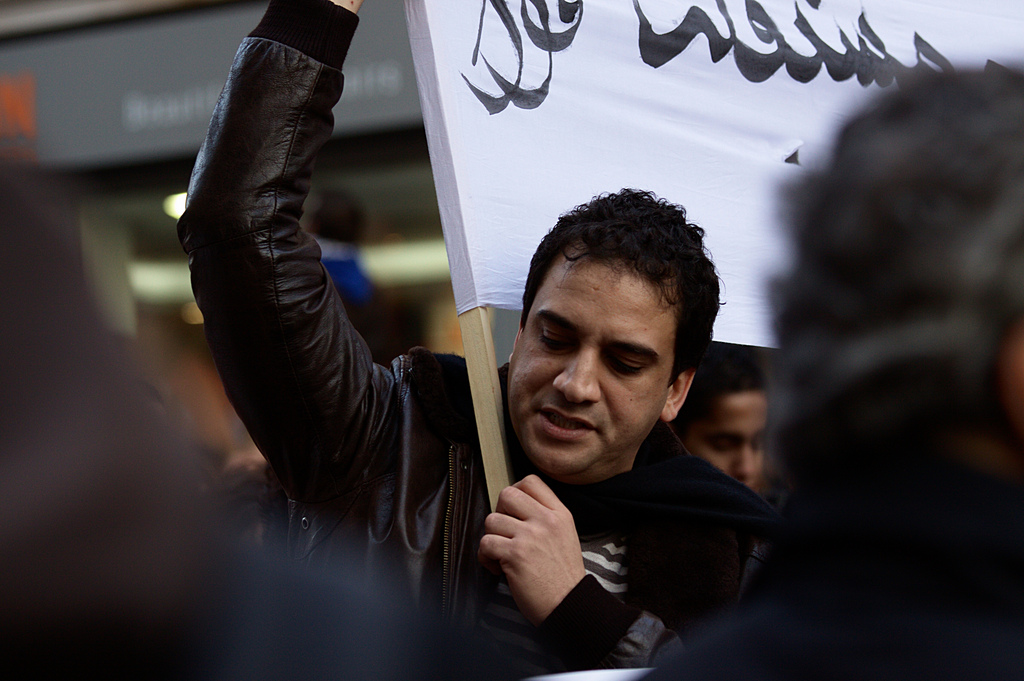 Tunisia's latest government reshuffle may broaden the ruling parties' social base, but it remains overly reliant on the same neoliberal economic policies that have made life miserable for so many Tunisians for years. (Photo: Gwenael Piaser / Flickr)

While Tunisia remains an island of hope, its latest government reshuffling promises to change little for the country's impoverished population.
By Rob Prince | December 31, 2013

About a year ago, in Los Angeles, I asked Jaco, a Tunisian-Jewish friend, for his thoughts on the post-Ben Ali Tunisian political situation. He thought about it for a second and summed up the Tunisian reality in two sentences. “Things will get worse…and then they’ll get better.” The first part has certainly come true. But right now it’s harder to see the bright future at the end of the tunnel.

Three years ago, on December 17, 2010, Mohamed Bouazizi immolated himself in Sidi Bouzid, an impoverished town in the Tunisian interior. The ensuing social explosion would force dictator Zine Ben Ali and his wife Leila Trabelsi from power before expanding to the entire Middle East.

Three years later, the prospects for “a new Tunisia” are somber enough. Talk of Tunisia as “the only successful democratic transition” in the Arab world is, unfortunately, more wishful thinking than fact.

The country is in full crisis. As in the region’s other revolutions, the Tunisian revolt was triggered by economic stagnation, massive corruption, and a repressive dictatorship. The demands of the revolution, which remain largely unaddressed, were essentially secular: far-reaching socioeconomic change and greater democracy. It was not about what variety of Islam the country might embrace.

True enough, Tunisia has not deteriorated to the levels of the civil war in Syria or the large-scale violence in Egypt. But three years after Mohamed Bouazizi set the country aflame, the path Tunisians have traveled has been a rocky one, involving a fair amount of suffering, much of it self-inflicted. Three years on, Tunisia slides from one crisis to another. Despite formal progress — credible elections, some regime facelifts — Tunisia is caught in a downward spiral that could easily get much worse. As the economy continues to tank and jobs become even scarcer for youth, more young people are amenable to the Salafist call of Islamic radicalism.

After considerable outside pressure, Tunisia is ushering in a new set of political leaders. But do they also represent a new politics or just more of the same?

The Errors of Ennahda

Outside factors, such as the corroding influence of Qatari and Saudi money, have played a role in Tunisia’s drift toward theocracy. And without foreign economic and political aid from the United States and Europe, the current government would not have a leg to stand on, and the Tunisia’s fragile political stability would collapse. But much of the responsibility for Tunisia’s current plight must be placed at the feet of the three-party ruling coalition, and particularly the Ennahda Party, which is essentially the Tunisian wing of the Muslim Brotherhood.

Ennahda and its leader Rachid Ghannouchi bear a great deal of responsibility for the growing polarization in the country. Like its sister organization in Egypt, Ennahda ruled with a mixture of ineptitude, factionalism, and growing repressiveness. Ennahda gave a free hand to more radical Islamist elements, permitting Salafists to gain control over the country’s mosques, bully and threaten more secular figures, intimidate women in an effort to undermine women’s rights, and Islamize the country’s educational system. In this process, the moderates of the past have been unceremoniously pushed aside.

The Ennahda-led government has lacked an economic program or vision to address the country’s economic and social ills. It has limped along on IMF handouts, with the usual harsh structural adjustments these entail. Its program was essentially cultural — to advance its own particular version of Islam within Tunisia’s long secular-oriented post-colonial government. A new intolerant religious sectarianism, fueled and funded with Saudi and Qatari money, has produced an even more toxic cocktail.

Now for the fourth time since the overthrow of the Ben Ali-Trabelsi dictatorship, the Tunisian ruling elite has had to shuffle the deck in response to widespread public outrage. Unending mass protests, combined with pressure from both the Obama administration and the European Union, have forced a leadership change. Past changes have been little more than political musical chairs, with the ruling troika — in which Ennahda holds most of the power — simply exchanging one Ennahda leader for another.

This time, fearing that it might suffer the same fate as the Egyptian Muslim Brotherhood, Ennahda reluctantly began a more serious process. The fundamental question is whether the new leadership actually offers the country a way out of the crisis, or whether it is once again an exercise of all the change necessary to maintain the status quo.

A “national dialogue” — somewhat limited in scope — has resulted in the announcement of a new government in which Ennahda has agreed to share power with Beji Caid Essebsi’s Nida Tounes Party, a party made up largely of prominent business and government elements from the Ben Ali period, including Essebsi himself. Nida Tounes is the old guard’s bid to return to power through the back door.  After several months of political wrangling, Ennahda agreed to a new transitional government of technocrats to replace the current government led by Ali Larayedh. Under pressure from Paris, Mehdi Jomâa, a Tunisian with ties to the French energy multinational Total, was chosen to replace him.

Although Ennahda and Nida Tounes disagree sharply on cultural policies — for instance, on the Islamization of Tunisian society — both parties are firmly committed to the same neo-liberal economic policies that Tunisia has embraced for the past 30 years and that are responsible for the ongoing social crisis facing the country. The new Ennahda-Nida Tounes power-sharing agreement slightly enlarges the social base of those in power while splitting and weakening the broader Tunisian opposition, just as it was meant to do.

Jomâa, a hardly known political figure, is already viewed with mistrust beyond the country’s business community. The Popular Front, the leftist opposition party whose size and influence continues to grow, has opposed the selection of a Jomâa-led government, noting that his support has a narrow base. Two of the leaders of this party, Chokri Belaid and Mohammed Brahmi, have been assassinated within the past year. These assassinations were key elements in Ennahda’s slide from popularity and the narrowing of its base of support.

Both Washington and Paris, wary of a perceived challenge from China in Africa, immediately acknowledged and strongly supported Tunisia’s new political constellation. Curiously, among those expressing most hope for the new Tunisian political pact is U.S. neoconservative Eliott Abrams — of Iran-Contra fame — who penned an entry on his Council of Foreign Relations blog deeming Tunisia the “last hope for the Arab Spring” and expressing support for the Jomâa-led government. He quoted a similar statement issued by the AIPAC spin-off, the Washington Institute for Near East Policy.

After trying to reign in Salafist excesses for three years, the Tunisian government has found that these elements are now out of control. The government is in pitched battles with armed Islamist radicals in the country’s mountainous western region near the Algerian border and elsewhere. As retired Tunisian General Rachid Ammar, “hero” of the events of January 2011, warned, “It is not terrorism, it is a rebellion.”

Three years later, self-immolation has been replaced by suicide bombing, unknown in Tunisia until recently. In October, one youth managed to blow himself up in Sousse, a lovely seaside fishing town that independence turned into a European tourist Mecca. The second attempt, by Aymen Saadi, a 17-year-old youth, was diffused before its payload could be detonated.

Aymen Saadi’s story is worth telling. A promising student, he left high school a year ago along with hundreds of other young Tunisian volunteers and traveled incognito to Libya, where he received military training in Salafist camps in and around Benghazi. From Libya he was flown to Turkey, the main entry point for Islamist fighters bound for Syria. Saadi and fellow travelers returned to Tunisia as trained and hardened Islamic guerillas.

Tunisian youths, recruited and radicalized by Salafist elements, are reportedly working with terrorist groups in Mali, Algeria, Iraq, and Libya. They return home to Tunisia and continue their “jihad.” Although there is no exact figure for the number of Salafist-trained youth re-entering the country, the figure thrown around is in the hundreds.

Ennahda has repeatedly denied that it actively recruits Tunisian youth to fight with Islamist rebels in Syria and Mali. But such denials ring false. In line with Muslim Brotherhood policy, the Tunisian government supports the Islamist-dominated Syrian rebels politically and militarily. Ennahda has done little to interfere with Salafist military recruiting taking place in Tunisia’s mosques and religious schools. Now it faces the inevitable blowback.

Complex as the Tunisian situation is, the country remains an island of hope in a sea of increasing cynicism. Preserving what is left of Tunisian democracy is very much in the U.S. interest. Three years ago, many U.S. policymakers, including Hillary Clinton, urged President Obama to take a more conservative course and continue to support Zine Ben Ali in Tunisia and Hosni Mubarak in Egypt. Against that advice, the president tilted toward supporting the democratic movements and the changes they demanded. It was one of Barack Obama’s finest moments.

No doubt, U.S. pressure was one element in convincing Ennahda to extend its base and embrace some of the country’s democratic elements. This was done not only to strengthen the government’s position in its struggle against a growing armed radical Islamic insurgency, but also to help save Tunisian democracy from disintegrating into Egyptian or Syrian-like chaos.

Rob Prince is a lecturer of international studies at the University of Denver’s Korbel School of International Studies and a contributor to Foreign Policy In Focus.