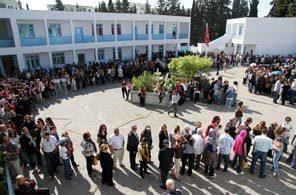 Although many challenges lie ahead, Ennahda's victory in Tunisia shows that the country is starting to work like a real democracy.
By Rob Prince | November 2, 2011

It was only 2005 — not all that long ago — that Zine Ben Ali won his third term as Tunisia’s president with 99 percent of the vote. At the time, critics dismissed the results as farcical, yet another attempt to put perfume on a police state known virtually universally for smothering any independent voice or democratic sentiment.

Tunisian dissidents viewed the 2005 results as a step in Ben Ali’s campaign to make himself president for life — or worse, through a change in the constitution, to open the door for his wife Leila Trabelsi and her clan to seize power. Concerns of this nature, and widespread anger at the clan’s unbridled greed and treachery, were a vital part of the mix that ignited the Tunisian revolt which began last December.

Obsessed with a largely non-existent radical fundamentalist threat in the country, the Bush administration defended Ben Ali as an ally of the United States in its “war on terrorism.” But so pervasive was the knowledge of Ben Ali’s abuses that even the Bush administration was uneasy and embarrassed by the charade — which is saying something.

Prior to the election, U.S. diplomats had expressed their concern that a 99-percent victory for Ben Ali would “send the wrong message abroad” and “undermine arguments that the US wants to bring more democracy to the Middle East.” Why not rig the results to something more credible — let’s say 75% — to at least give the illusion that democracy had not been completely snuffed out?

Unwilling to make compromises on a 99-percent victory, Ben Ali promised greater democracy would “soon come” thereafter. But if anything, he did just the opposite, tightening his grip on power and repressing the opposition as both the Ben Ali and Trabelsi clans swept up whatever independent economic assets they had not already.

And then Mohamed Bouazizi, a poor young vegetable peddler, lit the match that ended his life but changed the world. His immolation set off a regional explosion, the Arab Spring or Second Arab Revolt, fueled by a deadly mixture of high unemployment, low wages, and political repression.

Six years and one national rebellion after the fraudulent 2005 election, Tunisia has just completed the first truly democratic election in its history. It was also the first election of the Arab Spring. The election was held to create a legislative body that will govern the country while it writes a new constitution.

In the period before the election, a considerable amount of money flowed into Tunisia in an attempt to buy votes. It came from everywhere: the more conservative Arab Gulf States and Saudi Arabia (of course), Europe, and North America. Curiously, foreign money did not seem to have greatly affected the election results, reflecting in yet another way the political maturity of the Tunisian electorate.

The results were astonishing.

In a country of 10.5 million people with 4.4 million registered voters, perhaps as high as 90 percent of those eligible cast their votes, including many from the interior who had not formally registered but who had the right, according to the law, to participate. Eighty-one parties fielded candidates, half of whom were women. Over 7,000 accredited election observers, among them 533 foreign observers, monitored the proceedings, which were deemed among the most democratic ever held in the region.

As Middle East expert and University of Michigan professor Juan Cole put it, “the thirst for democracy demonstrated by such [statistics] is mind-boggling.”

The campaigning season was limited to little more than three weeks. As the Ministry of Information was abolished last spring, the media coverage of the candidates was without censorship – honest, open, and lively. The most watched TV station throughout the campaign was one of the sharpest critics of the interim prime minister.

Fears that an electoral victory by the moderate Islamic Party Ennahda would trigger violence — or worse, a civil war similar to what erupted in Algeria in the early 1990s — have proven to be unfounded.

And certainly, the big winner in these elections was Ennahda (Renaissance), which garnered some 41.5 percent of the vote and will take 90 of the 219 seats in the new constituent assembly. Two center-left secular parties – the Congress for the Republic (CPR) and Ettakatol – came in second and third, respectively, with the CPR taking 30 seats and Ettakatol 21.

Together the three parties will control 141 seats, or close to 65 percent of the assembly. Should they find the common ground to form a coalition, as is likely, they will be able to define the political direction of Tunisia for sometime into the future.

Although there have been concerns circulating among neoconservative circles and the French ruling class that the stunning Ennahda victory suggests some kind of Sharia state just around the corner in Tunisia, the response in the United States and Europe has been mostly positive.

Truth be told, the Ennahda victory startled virtually no one in the Middle East, nor I would argue, in the U.S. State Department. In an effort to remain “on the right side of history,” at least where Tunisia is concerned, the Obama administration appears more than willing to make peace with the results. U.S. Ambassador Gordon Gray, who visited polling places in Tunis, even called Ennahda’s victory “one of the defining events of our generation.”

Claims that Ennahda is some reincarnation of the Afghan Taliban or a Tunisian version of the Saudi Wahhabist movement are so far off the mark as to be ludicrous. While of course there will be political differences between Ennahda and its more secular coalition partners, there will be no Taliban-style Sharia in Tunisia, nor are the gains that Tunisian women have enjoyed since 1956 likely to be seriously eroded. Ennahda’s public commitment to concentrate on economic and social development and to find common ground with its coalition partners will dominate. It is likely that religious concerns will be of far less prominence on Tunisia’s future political agenda than some observers might expect.

Instead, Ennahda takes its lead from the more moderate Islamic political trends in Turkey, Malaysia, and Indonesia, which Western governments have long made peace with. Should there be elections elsewhere in the Middle East a la Tunisienne, moderate Islamic parties are likely to get similar percentages of the vote throughout the region.

The most salient feature of these elections, ignored by those pickled by their Islamophobia, is the degree to which Ben Ali’s political system – the house that Ben Ali built – was overwhelmingly rejected by the Tunisian electorate. The election marks, in a most democratic fashion, the beginning of a political purge of the Ben Ali machine.

The blow struck to Ben Ali’s political legitimacy – his legacy – by these elections cannot be overstated. First he and his darling wife were kicked out of the country unceremoniously; then many of the political remnants of his years in power were soundly defeated at the polls.

No party or political figure that had anything to do with the Ben Ali years did well. Many of the more well-financed parties – some of which were giving out food or money in exchange for votes – did poorly, as did any party that attempted to reconstitute Ben Ali’s Rassemblement Constitutionnel Democratique (RCD). Even some reformist opposition elements that at one time or another had tactically cooperated with the regime were punished by the voters. Indeed, all three of the leading parties – Ennahda, CPR, and Ettakatol – were clear and unambiguous public opponents of the Ben Ali regime over the years.

Vanquished too was the Ben Ali style of politicking. CPR leader Dr. Moncef Marzouki, for example, campaigned on the radical formula: “We are going to redistribute the wealth; we are going to redistribute the power.” In the same vein, neither the CPR nor Ettakatol attacked Islam or Ennahda per se, while those more secular parties that did attack Ennahda’s Islamic politics fared quite poorly. In part this is probably because of Ben Ali’s old habit of playing the anti-Islamic card to maintain his power.

North African expert Vincent Geisser has identified a number of underlining themes to Ennahda’s large showing. Foremost perhaps was a Tunisian desire to “return to normalcy” after months of tumult, indicating that the country as a whole feels more confidence in the leadership of Ennahda than of other parties. Second, the total may have represented a sympathy vote for the party that had suffered the worst repression of any under Ben Ali’s rule – whose sons and daughters had been undergone arrest and torture and had to flee the country in great numbers. This is not unlike the support that European communist parties received at the end of World War II as a result of their role in the resistance movements. Finally, although no opposition party was able to build a national constituency under Ben Ali, Ennahda benefited from the support of a network of families of political prisoners that came together after the fall of the regime.

Work Left to Do

There is still much work to do to solidify the gains made since Ben Ali was kicked out. Among the likely next steps are a thorough reworking of the Tunisian judiciary, the expulsion of remaining regime appointees, and a restructuring of the internal security apparatus. Poverty and unemployment still stalk the country’s interior, as well. Without some progress on these issues, it is likely that Tunisians will take to the streets once more.

A constitution needs to be written and another set of elections needs to take place before the “New Tunisia” is on a solid and stable path politically. This is no small order. Although the people of Tunisia have expressed their confidence in Ennahda’s moderate brand of Islamism – and their undoubtedly sincere sympathy for the repression the movement suffered in the Ben Ali years – support for the movement remains conditional.

To govern effectively in this transition period, Ennahda will have to enter into coalitions with secular centrist and center-left parties. Ennahda’s political future depends on its ability to work well in such coalitions. Failure to do so, or to push religious and cultural questions to the forefront, could paralyze the transition period, divide the country, and ultimately shrink the political capital of the Islamist party.