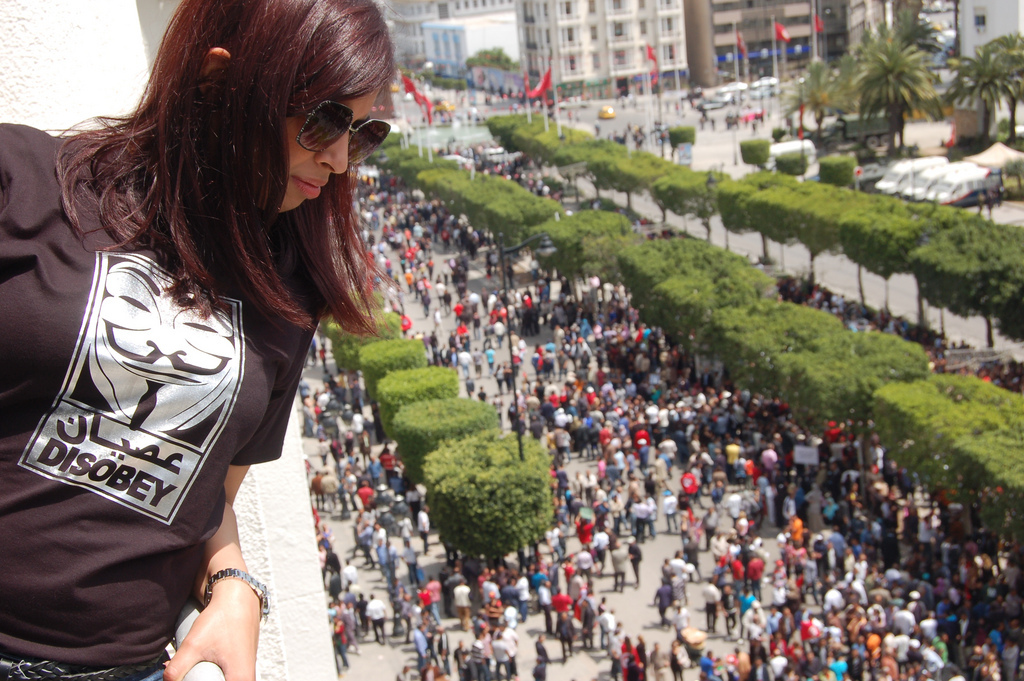 The oppression under which women lived during colonial rule has, in the interim, only marginally improved because of authoritarian regimes and religious traditions. (Photo: Aslan Media / Flickr)

Though the attention it has attracted is undeniable, the impact the new constitution will actually have on Tunisia remains to be seen.
By Hiba Ali | June 30, 2014

On August 13, 2011 , a scorching summer’s day in Tunis, mobs of the disheartened, infuriated, and passionate flooded the streets. Over a thousand women marched to convey a simple message: the time for equality had come.

The rally set into stark relief that for decades, under grueling regimes and imposing tyrannies, Tunisia has lacked a clear agenda for equality. As in other countries with tyrannical leaders, Tunisians were stripped of their rights, their voice, and any way of keeping the government accountable to citizens. Isolation within Africa  further spurred Tunisians’ anger. What began as an act of protest with the self-immolation of Mohamed Bouazizi soon turned into an intensive campaign of civil resistance, crying out for the ouster of the Tunisian dictator. Months of bitter violence and protest led to the downfall of President Zine El Abidine Ben Ali, on January 14, 2011, in a bloodless coup now known as the “Jasmine Revolution.” Yet even after that momentous change, much remained to be done to advance women’s and civil rights.

Three years later, based on work by a Constituent Assembly, Tunisia adopted a new constitution on January 26, 2014. Many hope it will provide a new direction for national politics and for women’s rights. The constitution may well influence not just the country, but the region as a whole, and become a progressive template for those seeking social justice worldwide.

For now, however, the rights enshrined in the constitution are but words on paper. The question  that remains is how much will truly change once the new constitution goes into effect.

In order to assess the new constitution’s potential to succeed, we need to understand why Tunisia found itself in such a despicable predicament to begin with. Much of that has to do with the colonial past.

Colonialism leaves a lasting impact on many nations, and can play a decisive role in how these societies are subsequently structured. Decolonization has often been difficult for nations with predominantly Islamic states , where the aim is to strike a balance between Western ideals of democracy including equality and freedom of speech, and Islamic traditions, which involve resisting Western social practices such as alcohol and mainstream media. Politically, many Islamic countries have become weary of western-influenced leaders.

Tunisia’s colonial past defines its identity to this day. The French ruled Tunisia from 1881 until the country gained independence in 1956.  Because French colonizers gave Tunisia much of its character, language, and culture, it became difficult for Tunisians to forge their own path forward.

Yet because local Tunisians disfavored French elites, a streak of nationalistic identity emerged that left Tunisians closely clinging to their Arab roots and Islamic religion. Along with this nationalist ideology came a strong anti-western sentiment, further provoked by the United States’ creation of puppet regimes in the region. As the late Pakistani politician Benazir Bhutto once said, “The colonial experience has … had a major impact on the Muslim psyche. Colonialism, resource exploitation, and political suppression have affected Muslims’ attitudes toward the West and toward themselves.” Arab countries find themselves at the threshold where Western values have become tarnished but so have the Islamic ones.

The struggle between colonialism and independence – between Western values and Islamic ones – can be seen in the issue of women’s rights. During colonial rule, Tunisian women lived in severely oppressive conditions. Soon after independence, and building on demands articulated in the movements leading up to that moment, in 1956 President Habib Bourguiba instituted the Personal Status Code (CSP),  a document that later influenced the 1959 constitution. The code prohibited polygamy, established more equitable rules for marriage and divorce, required equality of the sexes in the court system, mandated equal wages for equal work by men and women, and advanced women’s right to an education. By 1957, Tunisian women could vote in elections, and by 1959 they could run for public office. However, despite the fact that they enjoyed privileges unheard of in neighboring states, to this day women in Tunisia have continued to suffer under authoritarian regimes, and within the confines of traditional religious conceptions of women’s roles.

In the time since Tunisia overthrew its dictator in 2011, revolutions have sparked across the Arab world, with neighboring countries Egypt, Libya, Yemen, and Syria all following suit. The Arab Spring evolved into a symbol of successful revolutions and showed the power held by masses in the twenty-first century. Tyrannical leaders in the region could plainly see that people would give blood, sweat, and tears to pursue freedom from the shackles that bound them.

Recently, the Arab Spring has become something to fear not only by dictatorial regimes but also by the people. Following riots and protests, much of the Arab population has continued to face unemployment, instability, and civil unrest. Many wonder not only whether the revolution was worth the effort, but also whether stability will ever become a reality.

Of all the uprisings, the one playing out in the streets of Cairo has gotten the most media attention. In 2011, the orthodox “Islamist” party, the Muslim Brotherhood, won the support of unsure yet determined voters. This established the party as the primary ruling entity, with Mohamed Morsi as president. While at first Egypt appeared to be a success story for revolution, the military soon ousted the president, after the Egyptian people denounced the Islamist leader. With two uprisings in the course of two years, a dissatisfied people, and a dwindling economy, the Egyptian revolution has turned into a weary situation, filled with diffidence and instability.

As Egypt’s case shows, the Arab Spring revolutions involve more than struggles for stability and democratic states they represent an effort to achieve a balance between Islam and democracy. Parallels occurred in Tunisian society, though with a different outcome. In the laudatory words of the leader and founder of the Islamist Ennahda party of Tunisia, Rached Ghannouchi, his country’s constitution “…represents the dream of the great reformers of the 19th century, who tried to combine the values of Islam and the values of modernity, and who believed that Islam and the universal values and Islam and democracy are compatible.” It is a surprisingly accurate analysis.

In part because of this balance, Tunisia has been able to create a steady path forward. Whereas “Egyptian constitutional politics has been a winner-take-all game … Tunisian politics has been more consensual — though consensus has been difficult to achieve,” said Nathan Brown, Professor of Political Science and International Affairs at George Washington University, and an expert in Egyptian law. “The Tunisian experience is one that is more likely to give birth to a functioning democracy.” Tunisia’s constitution emerged from the widest possible consensus across society. Conservative thinkers, liberal activists, religious scholars ― in the end, all came to agree on a set of rights and laws defining Tunisians.

The constitution will certainly give the country’s female population a much deserved platform for future success. Overall, 28 articles protect the rights of the people, including protection from torture, the right to due process, the freedom to worship, and equality between men and women.

The impact the constitution will actually have on Tunisia is yet to be seen. But there is no denying the fact that it has gotten the attention of others. The Arab Spring spread like wildfire because it was based on the idea of freedom. That demand for freedom from all kinds of oppression has given birth to wave after wave of change in the region; some good and some bad. Tunisia’s constitution shows the progressive determination still surging around the Arab World.

Hiba Ali is an intern at the Institute for Policy Studies.