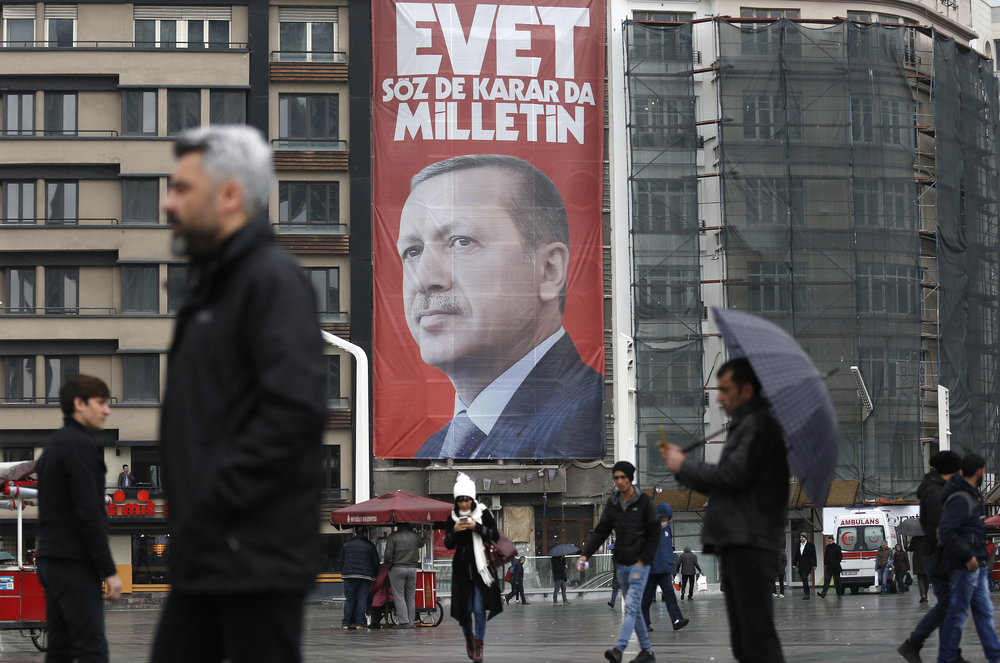 Turkey’s Erdogan Is Due for Another Rebuke

With municipal elections on the horizon, Turks are likely to note that imprisoning the opposition hasn't exactly raised living standards.
By Conn Hallinan | February 13, 2019

“Democracy is like a tram; you get off when you have reached your destination.”

The comment by Recep Tayyip Erdogan — made more than 20 years ago when he was first elected mayor of Istanbul — sums up the Machiavellian cynicism of Turkey’s authoritarian president.

As Turkey gears up for municipal elections on March 31, it is a prophecy Erdogan has more than fulfilled: the prisons filled with the opposition, the media largely silenced, the courts intimidated, the bureaucracy tamed, and more than 150,000 people fired.

But for all that, there dark clouds on the horizon, much of them largely of the president’s own making. And since it’s traditional for the Turkish electorate to use local elections to send a message, Erdogan and his Justice and Development Party (AKP) may be in for a setback.

The Road to Austerity

For one thing, the AKP’s bread and butter issue, the economy, is in trouble, and maybe very serious trouble.

Industrial production has fallen 6 percent and retail sales 7 percent, and overall growth has dropped from 7.4 percent in 2017 to a projected 2 percent in 2019. Inflation is at 20.3 percent and unemployment is accelerating. The most recent figures show that more than 11 percent are out of work, with almost twice that for young people age 15 to 24, who constitute some 20 percent of Turkey’s population.

In the past “terrorism” was the major concern for voters, but recent polls indicate that the economy is the number one issue, followed by unemployment and Syrian refugees.

Erdogan constructed his election juggernaut on economic growth that lifted a considerable section of the population out of poverty and fueled a major growth of the middle class. Much of that economy was centered on the construction industry and mega-projects like shopping malls, bridges, and the largest airport in the world.

For Erdogan an economy built around massive projects was a win-win formula: the AKP handed out lucrative contracts to big construction firms, which, in turn, filled the electoral coffers of a party that went from the margins of the political spectrum to at one point winning almost 50 percent of the electorate.

But growth fell to an anemic 1.6 percent in the third quarter of last year, and the construction industry is in a recession, with large layoffs almost certain. The crisis of the building trades has had a domino effect on allied industries in cement, steel, and ceramics. And the combination of the lira’s fall in value, coupled with the economic insecurity people are feeling, has depressed sales in the automotive industry, electronics and appliances,

The Turkish economy has long been reliant on foreign capital — so-called “hot money” — to keep the factories humming and living standards rising. But hot money is drying up and the bills are coming due.

Since much of Turkey’s debt is in foreign currency, it’s harder to pay off those debts with a depressed lira. Ankara has opened talks with the International Monetary Fund to explore a bailout, but IMF bailouts come with a price tag: austerity, not exactly a winning electoral program.

Meanwhile, though much of Erdogan’s political opposition has been jailed or sidelined, it has not been cowed.

In spite of nine parliamentary deputies from the Kurdish-based, left-wing People’s Democratic Party (HDP) being imprisoned, that party still managed to get enough votes in the last election to hold their spot as the third largest party in the parliament. A hunger strike by imprisoned Kurdish activists has also generated sympathy for the HDP, and for the first time in Turkish history many of the Kurdish parties have formed a united front.

The HDP has also decided not to run candidates for the mayoralties of the big cities like Istanbul and Ankara, in order to help elect candidates from the secular, center-right Republican People’s Party (CHP). In short, anyone but the AKP.

The AKP used to get a substantial number of Kurdish votes, particularly from conservative rural areas. But when Erdogan launched a crackdown on the Kurds in an effort to marginalize the HDP, he lost many of those voters. While not all of them have migrated to the left party, they have shifted their votes to other Kurdish parties, now united under the Kurdistani Election Alliance.

There is a certain amount of irony here. In an effort to make sure the AKP’s ally, the extreme right-wing National Action Party (MHP), made it into parliament, Erdogan rammed through a law that allows parties to form electoral alliances. Even if a party doesn’t reach the 10 percent threshold required to enter parliament, it will still win seats if it is allied with a bigger party.

The CHP has now formed an alliance with the nationalist Iti (“Good”) Party, and most of the Kurdish parties are under one umbrella. It’s likely those alliances will end up winning seats that they wouldn’t have under the old rules.

The Turkish occupation of northern Syria has failed to scatter the Kurdish-based Syrian Democratic Forces, and it looks increasingly like Ankara has stumbled into a quagmire. Erdogan’s plan was to drive the Kurds out and re-populate the area with Syrian refugees. Instead he is in a standoff with the Russians and the Americans, and, to protect themselves, the Kurds appear to be cutting a deal with the government of Bashar al-Assad.

There is a strong streak of nationalism in Turkey, and Erdogan may yet harvest it by pressing the Kurds in Turkey’s southeast, Iraq, and Syria. But the Turkish army is overextended and still reeling from the purge of officers and rank and file that followed the failed 2016 coup. And there are credible reports that the military is not overly happy with occupying part of Syria.

The Turkish president did score points in his battle with Saudi Arabia over the kingdom’s murder of the journalist Jamal Khashoggi, as well as with his support for Kuwait and Qatar in their dispute with the United Arab Emirates and the Saudis. His willingness to resist U.S. sanctions against Iran is also popular, because it means trade and a lift for Turkey’s ailing economy.

However, the March vote isn’t likely to turn on foreign policy, but rather on pocket book issues like unemployment and the wobbling economy. Erdogan is doing his best to head off any unrest over the economy by handing out low-interest loans and giveaways, like paying electrical bills for economically stressed families.

The Limits of Dirty Tricks

The opposition also claims that the AKP alliance is stuffing the rolls with non-existent voters. HDP investigators found that one house in Hakkari in the Kurdish southeast has 1,108 registered voters.

But Turkish agriculture is a mess, and construction and manufacturing are staggering under an enormous debt load. Erdogan has used the power of the state to hobble his opposition, but the state of emergency is alienating foreign investors, and many Turks are increasingly weary of it.

In the 2017 referendum that bestowed almost unlimited executive powers on Erdogan, he lost Istanbul, Ankara, and Izmir, Turkey’s largest cities. A recent poll showed support for the AKP had dropped from 42.5 percent the party got in the 2018 election to 35 percent today.

After 17 years of power, after using every device he could — including stuffing ballot boxes — to build a powerful executive system orbiting around him, it’s hard to imagine Erdogan suffering a setback. But tossing people in prison and intimidating opposition has had little effect on repairing the economy or raising living standards.

And many Turks may be souring on the “destination” that Erdogan has brought them to, and they could well decide to send that message on March 31.