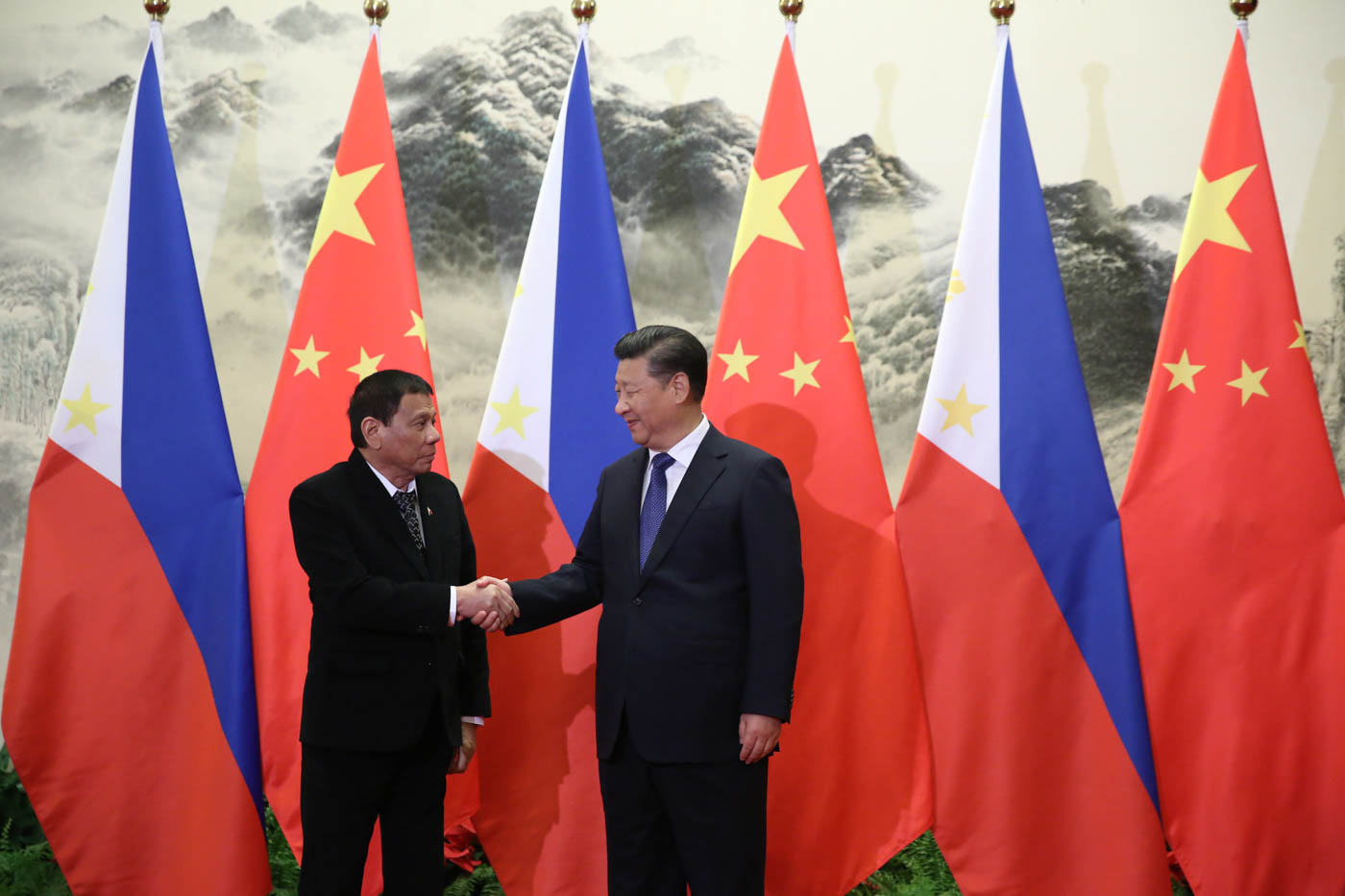 Two Strongmen Embrace as US Watches from Sidelines

Rodrigo Duterte and Xi Jinping are loving their bromance. But the relationship doesn't have a lot of popular support.
By Walden Bello, Ia Denise Maranon | November 21, 2018

President Xi Jinping of China arrived in Manila on November 20 for a state visit hosted by Philippine strongman Rodrigo Duterte. Washington will be watching closely as one of its traditionally closest allies deepens his relations with China.

Manila is hosting a man at the peak of his power. Xi has virtually undisputed control of his government and the Chinese Communist Party (CCP) that supervises it. His anticorruption campaign has rid the regime of likely challengers.  Perhaps the most striking measure of his primacy was his getting the CCP Congress earlier this year to scrap the constitutionally prescribed two-term limit on the tenure of president.

In the international arena, Xi has skillfully positioned himself to fill the global leadership role that President Donald Trump, with his erratic behavior, seems intent to relinquish. Moreover, Xi has not hesitated to use the resources of the still rapidly growing Chinese economy to win allies and influence governments. His Belt and Road Initiative of transcontinental infrastructure building deliberately evokes the image of the ancient “silk roads” linking imperial China to early modern Europe when the Middle Kingdom was numero uno.

Xi will be meeting with a head of state who is also at the apex of his political career. Undoubtedly the most powerful Philippine president since Ferdinand Marcos, Duterte has, over the last two-and-a-half years, removed the chief justice of the Supreme Court, achieved undisputed control of both the Senate and House of Representatives, imprisoned his chief political opponent in the Senate, forced most of the media into self-censorship mode, gained the support of most of the rank and file of the military and the acquiescence of the high command, and put a third of the country under martial law. His consolidation of power has elicited little outcry from the public. Indeed, his popularity ratings remain quite high, in spite of—or perhaps because of—a bloody anti-drug campaign that critics say has resulted in the extrajudicial execution of thousands of alleged drug users and pushers.

There is, no doubt, chemistry between the two leaders. The uninhibited Duterte has not hesitated to proclaim in public that “I love Xi Jinping.” Xi is more reserved, projecting an attitude of benevolent  tolerance toward Duterte, much like that of an older brother toward a rowdy sibling (though he is eight years younger than his counterpart).  Xi sees Duterte as a godsend that materialized at a time of escalating crisis in the South China Sea, a gift China did not expect or work for. He is grateful to the Philippine leader, though he is careful to separate his personal attitude from Beijing’s unswerving strategic goals in the disputed area. Beyond the personal rapport,  there is that deeper bond between both leaders: a belief in authoritarian leadership, to which they attribute China’s rise to economic and political prominence.

Duterte’s red carpet welcome will not be matched by one from his people. Beijing’s incursions into the Philippines’ Exclusive Economic Zone in the South China Sea and its continuing base-building on maritime formations belonging to the country has given China the image of a bully and provoked widespread resentment. These moves have unfortunately inflamed the already strongly held prejudices about the Chinese among many Filipinos. They are not likely to be mollified by Premier Li Keqiang’s recent offering of an olive branch to Southeast Asia’s leaders at the recent ASEAN Summit in Singapore: the promise to begin and conclude negotiations within three years of a much-delayed code of maritime conduct (COC) in the South China Sea. Filipinos—and ASEAN—are right to be skeptical since China has promised to move on the COC negotiations several times during the last 16 years but never delivered.  The latest promise is likely to be largely a PR effort to elicit popular good will for the presidential visit.

The South China Sea dispute is not the only issue bugging Filipinos about their giant neighbor. To push through its ambitious Build-Build-Build Program, the Duterte government has contracted about 368 billion pesos ($7.2 billion) worth of loans from China at what experts say is a rather high interest rate of 2-3 per cent. Partly to fund the effort, the government pushed through Congress a comprehensive tax law, the main component of which was raising consumption taxes on petroleum products by six pesos over three years. Since oil is a significant energy input into almost all industries in the country’s oil-intensive economy, the excise taxes became a signal to other sectors to raise their prices in anticipation of oil price rises, resulting in runaway inflation that hit an amazing nine-year high of 6.7 per cent in September, which may presage an Argentina-type price spiral that would be extraordinarily difficult to rein in. Not surprisingly, inflation has become associated in the public mind with the Chinese loans.

Popular perceptions are of concern to Xi since he wants to make sure that the new Manila-Beijing relationship endures. His concern has been exacerbated by speculation about Duterte’s health, which could only be fueled when the president missed key meetings at the recent ASEAN summit in Singapore, which left the Philippine leader’s subordinates scrambling to explain. The question of who will succeed Duterte and whether that person will be as congenial to Chinese interests is clearly one that Beijing does not take lightly.

The Chinese are probably painfully aware that institutional support for Duterte’s turn to Beijing is fragile. The Armed Forces of the Philippines (AFP) high command remains a bastion of support for the U.S. military owing to longstanding ideological, political, and military assistance. The professional diplomats at the Department of Foreign Affairs (DFA) are still smarting from Duterte’s abandonment of the legal victory notched by the Philippines at an international court of arbitration in the Hague that declared that the territorial claims of China over most of the South China Sea were without basis. Many of them had worked on the case.

With the military and DFA inhospitable territory, the de facto liaison with China has become the Department of Finance under a Duterte crony. Not surprisingly, the Philippines’ foreign policy toward China has become driven less by strategic concerns and more and more by dollars and cents, or, more appropriately, by renminbi and yuan. From its experience during the corrupt presidency of Gloria Macapagal Arroyo, Beijing knows that the benefits of yuan diplomacy are not lasting, and that what is decisive is gaining the assent of the institutions that determine the Philippines’ strategic foreign and military policies.

The Duterte administration had a chance to stake out a truly independent approach in its first months. As we proposed in an article that appeared in The New York Times on Oct 18, 2016, since fear of Washington’s military encirclement was driving China’s behavior, the Philippines could have pursued a more calculating policy of using the Hague legal victory as part of a strategy of getting China to agree to demilitarization of the South China Sea in return for the Philippines’ withdrawing from the Enhanced Defense Cooperation Agreement (EDCA) with the United States. Instead, Duterte unthinkingly leaped to a policy of strategic appeasement in return for economic largesse, trading territory and legal advantage for money.

The result has been economic largesse that is turning into a debt trap even as the strategic situation of the Philippines gets worse. Beijing continues its base-building in the country’s territories in the West Philippine Sea, while in the heartland of the archipelago, the United States is quietly using EDCA to rebuild the bases network that it lost in 1992 in order to massively project power against China. Though he has made threatening noises, Duterte has done nothing to impede the movement of U.S. personnel and materiel in the Philippines. Moreover, he gave his generals a free hand to work with U.S. Special Forces during the battle to take the city of Marawi in the southern Philippines from ISIS-linked insurgents in 2017.

The new China-Philippine relationship is only two-and-a-half years old. Some think there is still a chance for a reset. This is wishful thinking. Unfortunately, Philippine diplomacy nowadays is guided not by strategy but by the spontaneous instincts of Duterte, which are no match for the cold calculation of his idol, Xi.

Xi’s state visit will be marked by a lot of hyperbolic toasts to the “eternal friendship of the Filipino and Chinese peoples.” But the glitter of the Xi-Duterte bromance will not conceal the reality that, just as previous administrations allowed themselves to be had by Washington, this one has set itself up to be conned, eyes wide open, by Beijing.