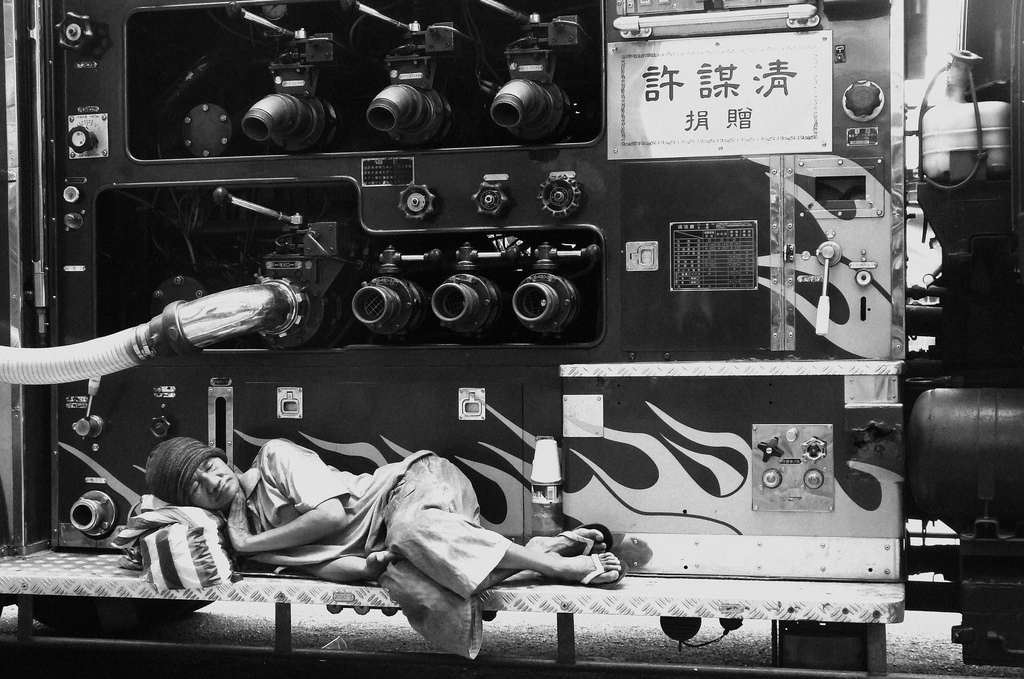 A Filipino migrant worker sleeps on the back of a firetruck in Manila. The country's rampant inequality, laid bare by Typhoon Haiyan, is in part a legacy of decades of Western-backed political repression and neoliberalism. (Photo: Duane Mendoza / Flickr)

Typhoons and Tigers: Why Taiwan Has Outpaced the Philippines

If it weren't for decades of Western-backed political and economic repression, the Philippines might have joined the Asian Tigers years ago.
By Scott Charney | January 20, 2014

When Typhoon Haiyan struck the Philippines last November, killing thousands and leaving a vast swath of injury, displacement, and devastation in its wake, it also laid bare just how vulnerable the country is to such natural disasters.

Plagued by vast inequality, the Philippines is not without modern infrastructure, but at the same time a great many impoverished Filipinos live and work in highly precarious settings, be they rural villages or urban slums. In fact, had the storm hit the crowded informal settlements in the Manila area, the toll of death and destruction could have been far worse.

This vulnerability is particularly striking when contrasted with the situation in Taiwan, one of the Philippines’ neighbors. Both nations achieved their nominal independence within a few years of one another, and yet Taiwan is far wealthier and fairly economically egalitarian, with most of its infrastructure much more capable of withstanding and responding to typhoons and other natural disasters.

What explains the disparity? As it happens, the modern history of each country is vastly different, and should serve as a lesson about the lasting impacts of colonialism and conflict.

From a Convent to a Brothel

Filipinos have been known to summarize their country’s history as “400 years in a convent and 100 years in a brothel” (with variations in vocabulary and number of years). The former span of time refers to the years of Spanish colonization, while the latter refers to the subsequent American occupation and heavy post-independence influence. Indeed, the Philippines has been shaped to an overwhelmingly degree by Spain and the United States (and briefly Japan) since 1521, when the ill-fated Ferdinand Magellan first walked ashore.

The archipelago formally became a Spanish colony in 1565. Though few Spaniards settled there (at least compared with Latin America), their impact was momentous: Spanish authorities peacefully converted the vast majority of the Filipino population to Catholicism and remade Filipino society from one with much communal usage of land into a feudal system. The village chiefs thus became a prosperous land-holding class, wielding immense power (together with the clergy) over most of the rest of the population. These tensions have roiled Filipino society ever since.

And here’s the short version of “100 years in a whorehouse”: After defeating Spain in the Spanish-American War of 1898, the United States took possession of the Philippines, enraging Filipino nationalists who thought their liberation was at hand. U.S. colonial authorities and their Filipino collaborators then viciously and indiscriminately crushed a rebel movement (whose own brutality cost them the support they needed to win), leaving hundreds of thousands dead, most of them civilians. The pattern after that was always largely the same, through the Philippines’ time as an American colony (1898-1933), an American commonwealth (1934-1946), an independent-but-undemocratic country (1946-1986), and finally as a nominally free and democratic country (1986-present): the same basic neoliberal paradigm of welfare for the rich and “free market” discipline for the rest.

In the years following the failed uprising, the U.S.-backed Filipino elite looted many billions of dollars through widespread corruption while violently repressing any attempt by the Filipino masses to improve the situation. First under a banner of naked colonialism, and later under the rationale of “anti-communism,” U.S. business interests profited from Filipino resources, while the U.S. military controversially constructed bases on Philippine land.

Social tensions that simmered under U.S. rule erupted during the Japanese Empire’s brief but sadistic 1942-1945 occupation of the country. The most prominent Filipino resistance force in those years, the communist-inspired Hukbalahap (or the Huks for short), launched an outright rebellion, attacking the Japanese and their Filipino collaborators while simultaneously attempting to redistribute the feudal estates. They won the sympathies of U.S. General Douglas MacArthur, who remarked that “if I worked in those sugar fields, I’d be a Huk myself.” Subsequent attempts, peaceful or armed, to redress the injustices in the Philippines were brutally repressed in the years following the country’s post-World War II independence, with consistent U.S. support.

Only Nixon Could Go to China

What a different story in nearby Taiwan! Brief periods of small-scale European settlement gave way to Chinese annexation in the 17th century, with Taiwan remaining under Beijing’s control until 1895, when the Japanese took over after defeating the Chinese in the First Sino-Japanese War. Japanese rule was definitely politically repressive, but at the same time the Japanese saw Taiwan as a “model colony” that could soon be integrated as a cultural and economic peer with the rest of Japan. Towards this end, they poured funds and effort into modernizing and uplifting Taiwan’s economy and infrastructure. After Japan’s defeat in the Second World War, Taiwan reverted to Chinese control, and not five years later, Chiang Kaishek’s defeated Nationalist/Kuomintang (KMT) faction had fled there to form a government-in-exile after their defeat by Mao’s Communists.

From that moment on, Chiang and his successors guided Taiwan’s path to prosperity, conspicuously beginning with a highly successful land reform program. Taiwan’s government gradually evolved into a “developmental state” that played an active role in marshaling the island’s natural and human resources towards a more prosperous future. This same chain of events played out successfully in all of the “Asian Tigers,” among other places, but too few people mention today that this path to prosperity was only possible because nobody forcibly stopped it from happening. In other words, land reform, resource-financed social spending, and other deviations from neoliberal orthodoxy (or even the potential thereof) usually elicited an aggressive response, covertly or overtly, from the United States, European countries, and their local satraps (like those who ruled the Philippines.)

How did Taiwan et al avoid this miserable fate? As the old saying goes, “Only Nixon could go to China” to thaw relations between Washington and Beijing, because it was impossible to credibly call him “soft on Communism.” Similarly, it was impossible to credibly Red-bait anti-Communist warriors like Chiang and the leaders of the other Tigers-to-be, even when they did things that, when they happened in other countries, set off alarms in Washington.

The Cold Warriors of yesteryear might have argued that the interventions that plagued the Philippines and so much of the developing world—but from which Taiwan was mercifully spared—were justified as a means to check the Soviet Union. But that raises the question for Cold War hawks—and advocates of the Obama administration’s Asia-Pacific “pivot” today—which country makes a better ally? The prosperous, well-armed Taiwan (which seems to be demonstrating Sun Tzu’s maxim that “to win without fighting is best”), or the militarily weak Philippines, beset by poverty and insurgencies fueled by the country’s perennial inequality?

All is not lost for the Philippines. As I wrote last winter, migration is one of the strongest mechanisms for reducing poverty, and not only do huge numbers of Filipinos work all around the world (including in Taiwan), their numbers are only likely to increase in the future. Filipinos widely speak English, and Spanish is making a comeback, adding to their attractiveness to international employers. Remittances have powered the growth of a sizable middle class, in a situation analogous to Mexico’s recent history.

Much work remains to be done, but the point is that it never had to be this way. If its people were left to their own devices, and not mistreated for so long, the Philippines would likely have joined the Asian Tigers years ago, making it stable, prosperous, and hardy in the face of natural disasters.