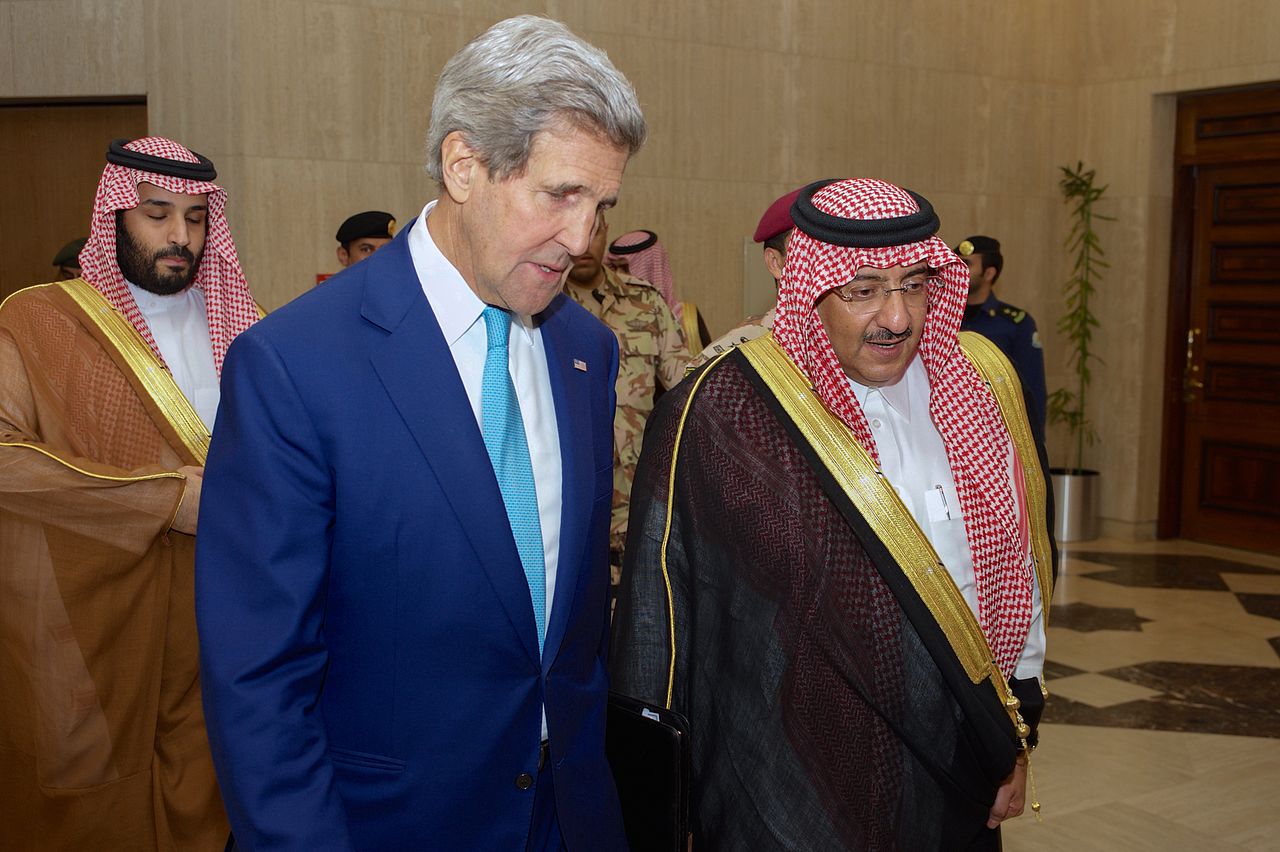 As with Saudi Arabia, the U.S. has long kept bad company: the Shah of Iran, Pinochet, the Greek Colonels, the contras.
By Rachelle Marshall | November 4, 2015

The good news this week was that Iran was included in the international conference in Vienna aimed at achieving a ceasefire in Syria. The bad news was that the conference ended without agreement, and with the participants firmly divided. As a consequence, there is no end in sight to a war that has lasted 4 years, killed a quarter of a million people, and driven 11 million into exile.

What began as a peaceful protest against Syrian President Bashar al-Assad that provoked a harsh response by Assad’s security forces, has since evolved into an international conflict. Participants include rebels supported by the United States, Saudi Arabia, and the Gulf emirates who are seeking to oust Assad, and the Syrian army, backed by Russia and Iran. President Obama’s recent decision to send in 50 Special Forces troops to Syria as “advisers” to the rebels, and his pledge of an additional $100 million in aid, set the United States firmly in the camp of Saudi Arabia and the emirates.

What appears to be a questionable choice of allies is in fact totally consistent with past U.S. policy. America’s self-proclaimed image as a beacon of freedom and human rights has been marred over the years by alliances with oppressive rulers, a long list that includes the shah of Iran, August Pinochet, the Greek colonels, the Argentinian generals, Salvadoran death squads, and the Nicaraguan contra. In line with this record is America’s close partnership with Saudi Arabia, a kingdom that acts with unparallelled brutality toward its own citizens as well as those of neighboring countries.

The European Union recently voted to award the Sakharov Prize for Freedom of Thought to Raif Badawi, a 31-year old Saudi blogger who in 2014 was sentenced to 10 years in prison and 1,000 lashes for cybercrime, and “disobeying his father.” The prize is named for Andrei Sakharov, a Russian physicist who during the Cold War defied an autocratic Soviet government in his defense of human rights. Badawi’s lawyer, Waleed Abulkhair, was sentenced to 15 years on charges of undermining the government and insulting the judiciary.

Badawi has already received 50 lashes and a second round has been scheduled. Martin Schulz, head of the European Parliament, described the punishment as “brutal torture” and “one of the most gruesome penalties.” The sentence has been condemned by U.N. and U.S. officials, Amnesty International, and Human Rights Watch. The Saudis in response said it was not the place of outsiders to criticize their judiciary.

New York Times columnist Nicholas Kristof exposed another example of Saudi brutality in a column of October 29, in which Kristof described the treatment of Ali al-Nimr, a young Saudi who was arrested at 17 for taking part in anti-government protests. He was accused of attacking police officers, but the only evidence was his confession, extracted under torture that Kristof writes, “left him a bloody mess,” unrecognizable to his mother when she visited him.

After exhausting his appeals, al-Nimr was sentenced to have his head hacked off in a public square and his headless body hung up as a warning to others. Beheadings are a frequent form of punishment in the kingdom. A Saudi court handed down a more merciful punishment of 10-years in prison to a professor of Islamic studies, Abdel-Karim al-Khadar, who was convicted of criticizing religious extremism and speaking out in support of women’s rights.

In mid-October, a 74-year old Englishman was sentenced to receive 350 lashes for possessing alcohol. Coincidentally, it was not long after that a Saudi prince, Mejid Abdulazis al-Saud, was arrested in Los Angeles for drinking heavily, using cocaine, and terrorizing women. “I am a prince,” he declared, and I do what I want.”

Meanwhile, a Saudi coalition composed of the Gulf emirates and backed by the United States is systematically destroying Yemen in hopes of defeating Houthi rebels from the north whom the Saudis claim are surrogates of Iran.The Saudis defend their intervention into Yemen’s long-running civil war as necessary to counter the threat of Iranian expansionism, but the cost in human suffering of the Saudi coalition’s 7-month bombing campaign and blockade has been incalculable.

The Obama administration has steadfastly refrained from criticizing the Saudis’ actions in Yemen, even after Saudi air strikes leveled a Doctors Without Borders hospital in Saada in late October. The United States has also repeatedly withheld its support for an international investigation into human rights abuses by both sides.

Obama is understandably reluctant to alienate an oil-rich country that spends a large share of its oil profits on purchases of U.S. arms. But for years the standard explanation has been that the Saudis provide stability in a volatile region of the world. In fact, the opposite is true. The Wahhabi form of Islam that is adhered to by ISIS and other religious extremists originated in Saudi Arabia and is strictly enforced in that country. Saudi money supports  madrassas all over the world that teach Wahabism with all its fundamentalism and intolerance, and little else. Graduates of those madrassas are undoubtedly among the rebel groups currently fighting in Syria.

It isn’t surprising that the Saudis’ main fear is of Iran, which is predominantly Shi’a, and offers an example of a Muslim nation with less stringent religious laws, and where women enjoy relative freedom. In response to this fear, according to Joost Hilterman of the International Crisis Group, the United States and its western allies are determined to provide assurances ”psychologically [and] politically that in fact, Saudi Arabia remains a staunch American ally and is protected from encroachment from Iran.”

At the same time, Iran’s participation is essential in any attempt to deal with the pressing problems in the region, including the war in Syria, refugees, the sectarian conflict in Iraq, and the threat posed by ISIS terrorism. The hopeful sign is that Secretary of State John Kerry and Iranian Foreign Minister Mohammad Javad Zarif have reportedly developed a relationship that could lead to more cooperation between the two countries.

The fact that the Iranians were included at the October 31 meeting was a welcome development, but disagreement over the fate of Assad remains an obstacle. Experts on the region said that to end the fighting, the United States and its allies must agree to Assad remaining as president during a transition period, and Russia and Iran must accept his eventual departure. Both Russia and the United States appear ready to accept such a requirement.

The Saudis are the stumbling block. Saudi Foreign Minister Adel al-Jubeir said after the meeting in Vienna that Saudi policy toward Syria had not changed, and that Assad must go. “Ideally he should leave this afternoon,” al-Jubeir said. Participants at the meeting agreed to hold a future session on Syria, but meanwhile it is fair to say that continued U.S. support for Saudi Arabia, whatever its perceived advantages, makes a mockery of the principles America claims to stand for.