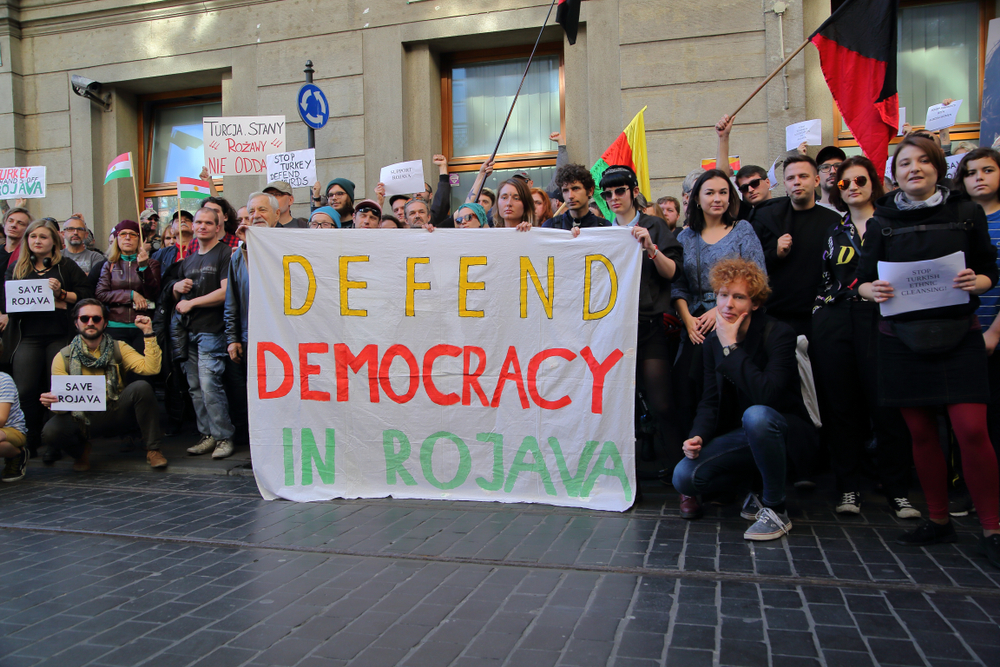 The Kurdish enclave in Syria could be a model of democratic governance in an otherwise autocratic region.
By Edward Hunt | May 14, 2021

A U.S. commission on religious freedom is calling on the U.S. government to grant formal recognition to the Autonomous Administration of North and East Syria (AANES), the northeastern region of Syria that is commonly known as Rojava.

Late last month, the U.S. Commission on International Religious Freedom published its Annual Report, which includes a recommendation that the U.S. government “recognize the AANES as a legitimate, local government.”

The U.S. commission’s recommendation gives a boost to the autonomous administration’s efforts to garner international support for its creation of a self-administered region within northeastern Syria. If successful, Rojava’s experiment with regional autonomy and direct democracy could become a model of political organization for Syria and one of the few positive developments to emerge from the country’s decade of civil war.

“This model in the autonomous administration should be supported,” Rojava’s top diplomat to the United States, Sinam Mohamad, said at a conference last month after the release of the report. The Rojava model could be “a solution for the Syrian crisis,” she added.

In March 2016, several regions in northeastern Syria voted to join together in a self-administered system that would seek autonomy within Syria. Although the U.S. government and other regional governments refused to recognize the move, Rojava has been functioning as an autonomous region. Its governing structures administer the area, provide the area with security, and conduct diplomacy with the United States and other regional powers.

While many on the left have praised Rojava for its commitment to pluralism, gender equality, and direct democracy, the region continues to face several challenges, especially from Turkey, the Islamic State, and the Syrian government of Bashar al-Assad.

Turkey has repeatedly attacked Rojava. In October 2019, Donald Trump facilitated a brutal Turkish attack on Rojava when he withdrew U.S. forces from the area’s northern border with Turkey, clearing the way for a Turkish invasion.

“I call on the United Nations, even the United States, to include us in peace talks in the future of Syria,” Mohamad said.

Despite these recommendations, there has been little movement in Washington. As U.S. military forces remain stationed in Rojava, U.S. officials are focusing on how they can use Rojava in ongoing campaigns against the Islamic State and the Syrian government of Bashar al-Assad.

Some U.S. officials want to preserve military ties with Kurdish-led military forces in Rojava for the purpose of preventing the Syrian regime from re-establishing its control over the area. A congressionally mandated U.S. study group has described Rojava as “the United States’ greatest single point of leverage in Syria.”

Still, not everyone in Washington believes that the U.S. military presence in Rojava provides the United States with much leverage. Earlier this month, former U.S. Ambassador to Syria Robert Ford said that he did not expect the U.S. approach of patrolling the region’s oil fields to succeed.

“We’re holding oil fields now to put pressure on Bashar al-Assad, but it’s never going to bring Assad down,” Ford said. “Too bad, but it won’t.”

Ford thinks that at some point, U.S. soldiers could be killed, prompting the U.S. government to withdraw its remaining forces from the area.

“The Syrian Kurds would be taking a big risk to depend on us,” Ford said.

Nadine Maenza, one of the heads of the commission, thinks that there would be political support in Washington for granting the autonomous administration recognition.

“There is surely growing support,” Maenza said in an interview last month. “The people in northeast Syria deserve recognition and deserve to have a government acknowledged by the world.”