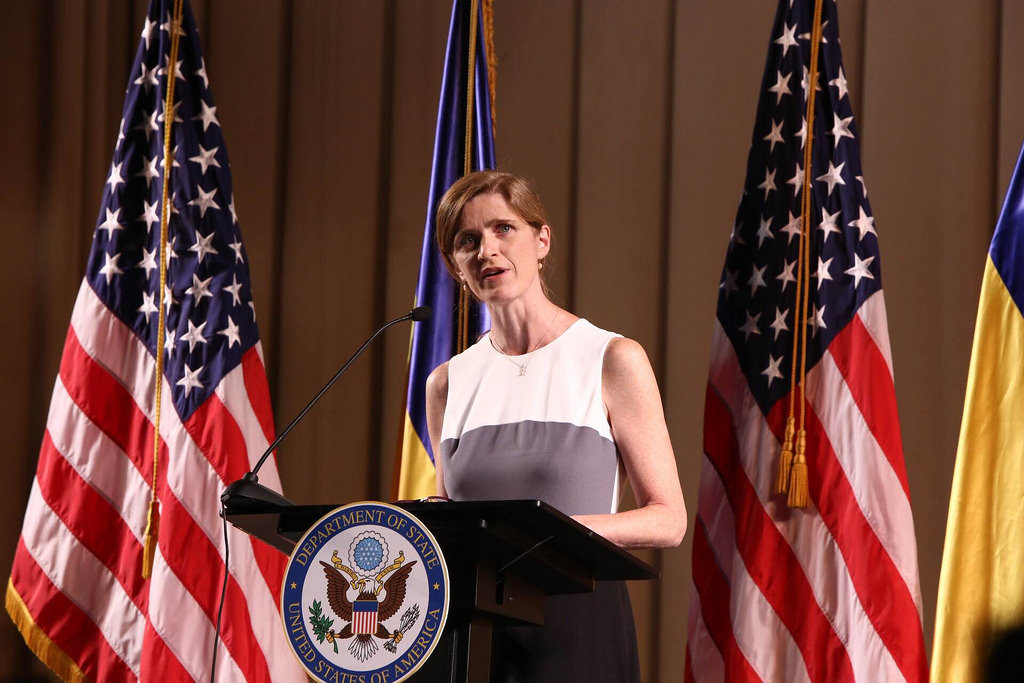 Is the United States on the verge of enshrining humanitarian intervention as a bedrock principle of foreign policy?
By Conn Hallinan | October 3, 2016

While the mainstream media focuses on losers and winners in the race between Hillary Clinton and Donald Trump, a largely unreported debate is going on over the future course of U.S. diplomacy. Its outcome will have a profound effect on how Washington projects power—both diplomatic and military—in the coming decade.

The issues at stake are hardly abstract. The United States is currently engaged in active wars in Afghanistan, Iraq, Syria, Yemen, and Somalia. It has deployed troops on the Russian border, played push –and-shove with China in Asia, and greatly extended its military footprint on the African continent. It would not be an exaggeration to say—as former U.S. Secretary of Defense William Perry has recently done—that the world is a more dangerous place today than it was during darkest times of the Cold War.

Tracking the outlines of this argument is not easy, in part because the participants are not always forthcoming about what they are proposing, in part because the media oversimplifies the issues. In its broadest framework, “realists” represented by former National Security Advisor Henry Kissinger, Harvard’s Steven Walt, and University of Chicago’s John Mearsheimer have squared off against “humanitarian interventionists” like current UN Ambassador Samantha Power. Given that Power is a key advisor to the Obama administration on foreign policy and is likely to play a similar role if Clinton is elected, her views carry weight.

In a recent essay in the New York Review of Books, Power asks, “How is a statesman to advance his nation’s interests?” She begins by hijacking the realist position that U.S. diplomacy must reflect “national interests,” arguing that they are indistinguishable from “moral values.” What happens to people in other countries, she argues, is in our “national security.”

Power—along with Clinton and former President Bill Clinton—has long been an advocate for “humanitarian intervention,” behind which the United States intervened in the Yugoslav civil war. Humanitarian intervention has since been formalized into “responsibility to Protect,” or R2P, and was the rationale for overthrowing Muammar Gaddafi in Libya. Hillary Clinton has argued forcibly for applying R2P to Syria by setting up “no-fly zones” to block Syrian and Russian planes from bombing insurgents and the civilians under their control.

But Power is proposing something different than humanitarian intervention. She is suggesting that the United States elevate R2P to the level of national security, which sounds uncomfortably like an argument for U.S. intervention in any place that doesn’t emulate the American system.

Facing Off against the Kremlin

Most telling is her choice of examples: Russia, China, and Venezuela, all currently in Washington’s crosshairs. Of these, she spends the most time on Moscow and the current crisis in Ukraine, where she accuses the Russians of weakening a “core independent norm” by supporting insurgents in Ukraine’s east, “lopping off part of a neighboring country” by seizing Crimea, and suppressing the news of Russian intervention from its own people. Were the Russian media to report on the situation in Ukraine, she writes, “many Russians might well oppose” the conflict.

Power presents no evidence for this statement because none exists. Regardless of what one thinks of Moscow’s role in Ukraine, the vast majority of Russians are not only aware of it, but overwhelmingly support President Vladimir Putin on the issue. From the average Russian’s point of view, NATO has been steadily marching eastwards since the end of the Yugoslav war. It is Americans who are deployed in the Baltic and Poland, not Russians gathering on the borders of Canada and Mexico. Russians are a tad sensitive about their borders, given the tens of millions they lost in World War II, something of which Power seems oblivious.

What Power seems incapable of doing is seeing how countries like China and Russia view the United States. That point of view is an essential skill in international diplomacy, because it is how one determines whether or not an opponent poses a serious threat to one’s national security.

Is Russia—as President Obama recently told the UN—really “attempting to recover lost glory through force,” or is Moscow reacting to what it perceives as a threat to its own national security? Russia did not intervene in Ukraine until the United States and its NATO allies supported the coup against the President Viktor Yanukovych government and ditched an agreement that had been hammered out among the European Union, Moscow, and the United States to peacefully resolve the crisis.

Power argues that there was no coup, but U.S. Assistant Secretary of State Victoria Nuland and the U.S. Ambassador to the Ukraine, Geoffrey Pyatt were caught on tape talking about how to “mid-wife” the takeover and choose the person they wanted to put in place.

As for “lopping off” Crimea, Power had no problem with the United States and NATO “lopping off” Kosovo from Serbia in the Yugoslav War. In both cases local populations—in Crimea by 96 percent—supported the takeovers.

Understanding how other countries see the world does not mean one need agree with them, but there is nothing in Moscow’s actions that suggests that it is trying to re-establish an “empire,” as Obama characterized its behavior in his recent speech to the UN. When Hillary Clinton compared Putin to Hitler, she equated Russia with Nazi Germany, which certainly posed an existential threat to our national security. But does anyone think that comparison is valid? In 1939, Germany was the most powerful country in Europe with a massive military. Russia has the 11th largest economy in the world, trailing even France, Germany, the United Kingdom, Italy, and Brazil. Turkey has a larger army.

Power’s view of what is good for the Russian people is a case in point. Although one can hardly admire the oligarchy that dominates Russia—and the last election would seem to indicate considerable voter apathy in the country’s urban centers—the “liberals” Power is so enamored with were the people who instituted the economic “shock therapy” in the 1990s that impoverished tens of millions of people and brought about a calamitous drop in life expectancy. That track record is unlikely to get one elected. In any case, Americans are hardly in a position these days to lecture people about the role oligarchic wealth plays in manipulating elections.

The View from China

The Chinese are intolerant of internal dissent, but Washington’s argument with Beijing is over sea lanes, not voter rolls.

China is acting the bully in the South China Sea, but it was President Bill Clinton who sparked the current tensions in the region when he deployed two aircraft carrier battle groups in the Taiwan Straits in 1995-96 during a tense standoff between Taipei and the mainland. China did not then—and does not now—have the capacity to invade Taiwan, so Beijing’s threats were not real. But the aircraft carriers were very real, and they humiliated—and scared—China in its home waters. That incident directly led to China’s current accelerated military spending and its heavy-handed actions in the South China Sea.

Again, there is a long history here. Starting with the Opium Wars of 1839 and 1860, followed by the Sino-Japanese War of 1895 and Tokyo’s invasion of China in World War II, the Chinese have been invaded and humiliated time and again. Beijing believes that the Obama administration designed its “Asia pivot” as to surround China with U.S. allies.

While that might be an over simplification—the Pacific has long been America’s largest market— it is a perfectly rational conclusion to draw from the deployment of U.S. Marines to Australia, the positioning of nuclear-capable forces in Guam and Wake, the siting of anti-ballistic missile systems in South Korea and Japan, and the attempt to tighten military ties with India, Indonesia, and Vietnam.

“If you are a strategic thinker in China, you don’t have to be a paranoid conspiracy theorist to think that the U.S. is trying to bandwagon Asia against China,” says Simon Tay, chair of the Singapore Institute of International Affairs.

As for Venezuela, the U.S. supported the 2002 coup against Hugo Chavez and has led a campaign of hostility against the government ever since. For all its problems, the Chavez government cut poverty rates from 54.5 percent of the population to 32 percent, and extreme poverty from around 20 percent to 8.6 percent. Infant mortality fell from 25 per 1,000 to 13 per 1,000, the same as for Black Americans.

And the concern for the democratic rights of Venezuelans apparently doesn’t extend to the people of Honduras. When a military coup overthrew a progressive government in 2009, the United States pressed other Latin American countries to recognize the illegal government that took over in its wake. Although opposition forces in Venezuela get tear-gassed and a handful jailed, in Honduras they are murdered by death squads.

Power’s view that the United States stands for virtue instead of simply pursuing its own interests is a uniquely American delusion. “This is an image that Americans have of themselves,” says Jeremy Shapiro, research director of the European Council on Foreign Relations, “but is not shared, even by their allies.”

The “division” between “realists” and R2P is an illusion. Both end up in the same place: confronting our supposed competitors and supporting our allies, regardless of how they treat their people. Although she is quick to call the Russians in Syria “barbarous,” she is conspicuously silent on U.S. support for Saudi Arabia’s air war in Yemen, which has targeted hospitals, markets, and civilians.

The argument that another country’s internal politics is a national security issue for the United States elevates R2P to a new level, sets the bar for military intervention a good deal lower than it is today, and lays the groundwork for an interventionist foreign policy that will make the Obama administration look positively pacifist.

It is impossible to separate this debate on foreign policy from the current race for the White House. Clinton has been hawkish on most international issues, and she is not shy about military intervention.

She has also surrounded herself with some of the same people who designed the Iraq war, including founders of the Project for a New American Century. It is rumored that if she wins she will appoint former Defense Department official Michele Flournoy as secretary of defense. Flournoy has called for bombing Assad’s forces in Syria.

On the other hand, Trump has been less than coherent. He has made some reasonable statements about cooperating with the Russians and some distinctly scary ones about China. He says he is opposed to military interventions, although he supported the war in Iraq (and now lies about it). He is alarmingly casual about the use of nuclear weapons.

In Foreign Affairs, Stephen Walt, a leading “realist,” says that Trump’s willingness to consider breaking the nuclear taboo makes him someone who “has no business being commander in chief.” Other countries, writes Walt, “are already worried about American power and the ways it gets used. The last thing we need is an American equivalent of the impetuous and bombastic Kaiser Wilhelm II.” The Kaiser was a major force behind World War I, a conflict that inflicted 38 million casualties.

Whoever wins in November will face a world in which Washington can’t call all the shots. As Middle East expert Patrick Cockburn points out, “The U.S. remains a superpower, but is no longer as powerful as it once was.” Although it can overthrow regimes it doesn’t like, “it can’t replace what has been destroyed.”

Power’s framework for diplomacy is a formula for a never-ending cycle of war and instability.