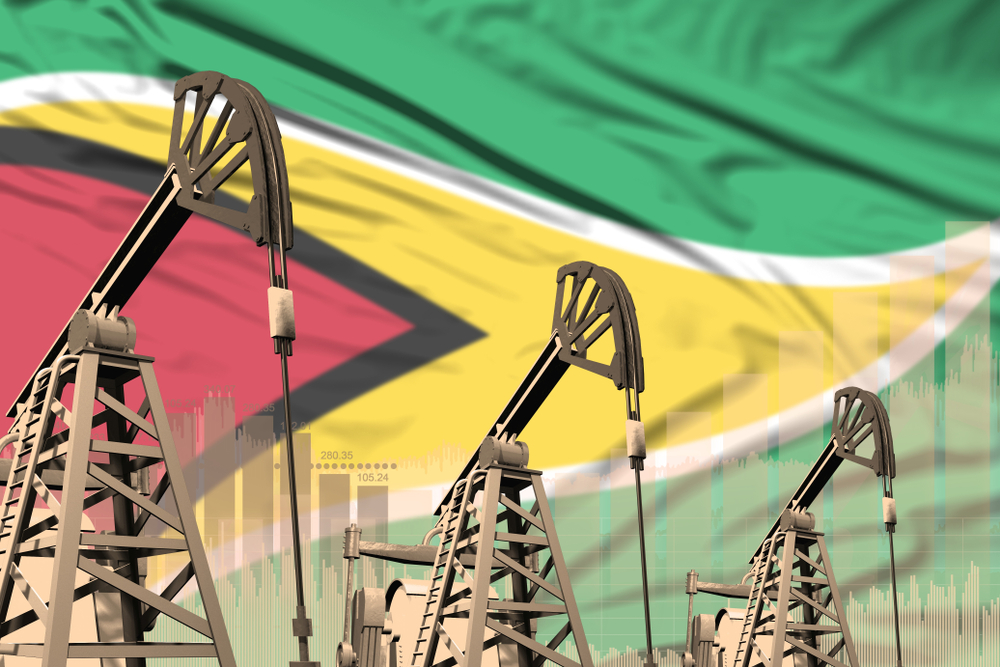 The Trump administration is all about forcing open overseas markets for U.S. businesses.
By Edward Hunt | April 3, 2019

With the oil giant ExxonMobil preparing to drill for oil off the coast of Guyana, U.S. diplomats are working to empower U.S. businesses to develop industries in the small South American country, where an anticipated oil boom is expected to generate unprecedented profits.

According to the State Department’s 2018 Investment Climate Statement, Guyana is becoming an attractive location for international investors. Future drilling by ExxonMobil “would generate billions in revenue for the country and could potentially transform the social, political, and economic landscape,” the State Department reported.

Given the anticipated oil boom, many investors hope to ride a wave of oil and oil-related wealth to newfound riches. “Foreign investment is likely to greatly increase in the coming years,” U.S. Ambassador to Guyana Sarah-Ann Lynch recently commented. “Guyana has vast untapped resources, so the potential is enormous.”

U.S. efforts to attract investors to Guyana are part of the Trump administration’s broader goal of opening international markets to U.S. businesses. Although President Trump identifies himself as “Tariff Man,” or someone who creates barriers to trade in the U.S. market, he wants to reduce all such barriers to trade in other countries.

“I’m opening up markets like nobody has ever opened markets before,” the president boasted last year.

The State Department has a team of about 1,500 officers working at U.S. embassies around the world with the “primary goal” of opening markets, according to Secretary of State Mike Pompeo. As Pompeo told an audience of oil executives and energy investors last month, U.S. diplomats are “working to ensure that markets are open for American businesses all around the world.”

If “you want to attack markets all around the world,” Pompeo said in a separate interview, the “State Department’s here to help you.”

Since the discovery of oil off the coast of Guyana, U.S. diplomats have been relentlessly attacking markets in Guyana. In diplo-speak, they are working to create a better “business climate.”

When previous U.S. Ambassador to Guyana Perry Holloway arrived in the country in 2015, he announced that he had come with a mandate from Washington to “improve the country’s overall business climate.” One of Holloway’s priorities was to establish an American Chamber of Commerce there. When it opened last year, he mused about whether its opening had “set the record for the fastest launch of an official AmCham affiliate.”

“Of course,” he told his audience, “I am not sure whether anyone could make remarks here tonight without mentioning oil.”

For U.S. officials, oil has been the main focus of their efforts in Guyana. According to ExxonMobil, there are more than five billion barrels of oil-equivalent located in the Stabroek Block, an area about 100 miles off the coast of Guyana.

The anticipated oil boom has not been without its challenges, however. Over the past several years, U.S. diplomats have been scrambling to quell numerous controversies, including concerns about the likelihood of an oil spill, a controversial oil contract between ExxonMobil and the Guyanese government, and an ongoing border dispute between the Guyanese and Venezuelan governments over the area where the oil is located.

Fortunately for ExxonMobil, the company has had a powerful friend in President Trump. Since entering office, the president has been working to unleash the power of U.S. oil companies.

Early in his presidency, President Trump gave the oil industry one if its biggest gifts by withdrawing the United States from the Paris Climate Agreement. Meanwhile, his administration has been questioning the science on climate change, repealing regulations that reduce carbon emissions, opening new parts of the country for drilling, and defending the use of fossil fuels.

“The oil and gas industry, I want to promise you, has no greater friend than President Donald Trump,” Vice President Mike Pence told the Oil and Gas Association last month.

Undoubtedly, the administration’s actions are contributing to a dramatic redistribution of power in the global oil market. Just last year, the United States emerged as the largest oil producer in the world.

“We’re getting close to where we’ll have true American energy dominance,” Secretary of State Pompeo marveled at a recent energy forum.

In Guyana, the anticipated oil boom will only add to the Trump administration’s efforts to achieve American energy dominance. Although the oil is located off the coast of Guyana, its production and distribution remains largely under the control of ExxonMobil. Indeed, oil will be drilled by ExxonMobil and sold into the marketplace by ExxonMobil.

The people of Guyana, who have been promised great riches, will most likely never see the oil. In fact, they do not even need it. When the Guyanese government entered the Paris Climate Agreement, it acknowledged that the country could very likely eliminate its dependence on fossil fuels over the next several years.

“Given our solar, wind and hydropower potential and relatively small national demand, we believe that with adequate and timely financial support, Guyana can develop a 100 percent renewable power supply by 2025,” the Guyanese government reported in its Intended Nationally Determined Contribution.

U.S. officials, however, have been far more focused on achieving business climate change in Guyana. As Trump has been trashing the Paris Climate Agreement, the U.S. embassy in Guyana has been working to leverage the anticipated oil boom into an extravaganza of wealth and profits, all with little concern about the environmental impact.