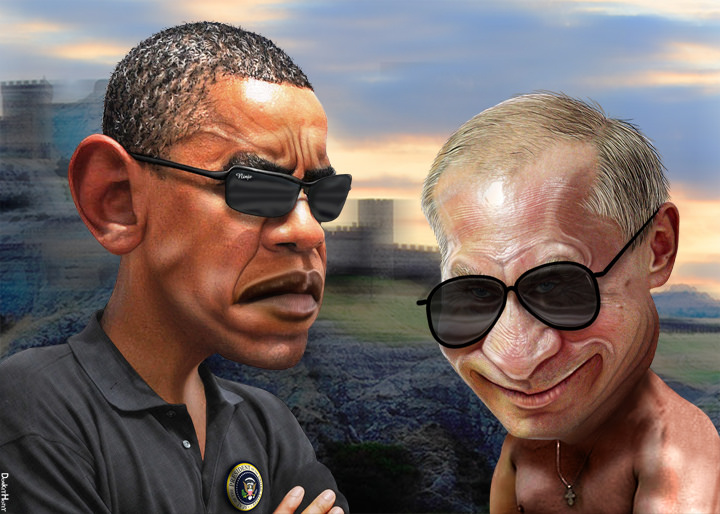 Washington's leadership of international efforts against Russian aggression has been severely compromised by its own hypocrisy and double standards. (Image: Donkey Hotey / Flickr)

U.S. Leadership Against Russia Crippled By Its Own Hypocrisy

Washington's major limitation towards Russia is not a lack of military leadership, but a lack of moral leadership.
By Stephen Zunes | September 15, 2014

The fragile ceasefire between the U.S.-backed Ukrainian government and Russian-backed rebels could help pave the way to a peaceful resolution to the conflict—or simply postpone a worsening of the crisis. Unfortunately, Washington’s leadership of international efforts against Russian aggression has been severely compromised by its own hypocrisy and double standards.

As with Russia in eastern Ukraine, the United States has a long history of arming, training, and even providing personnel in support of rebel groups in such countries as Afghanistan, Angola, Nicaragua, Libya, Syria, and elsewhere in contravention of international legal norms of non-interference in the internal affairs of foreign nations. While it doesn’t make Russia’s role in Ukraine any more legitimate, at least Moscow can point to the fact that in none of the cases of U.S. intervention in civil conflicts was the conflict along the U.S. border, nor were the rebel movements led by those who identified as Americans.

Similarly, while demands by the United States for the Russian government to apologize for its role in the downing of a civilian airliner over Ukraine are quite appropriate, it’s important to note that the United States never apologized for the 1988 downing of an Iranian airliner over Iranian waters by a U.S. Navy warship. Indeed, the two officers responsible for shooting down the civilian plane were given medals for “meritorious service” following the incident.

The international community has legitimate concerns regarding Russia’s aggrandizement. The so-called referendum used to justify its takeover of Crimea did not include the option of maintaining the peninsula’s current legal status with Ukraine and took place under the presence of tens of thousands of armed foreign troops. Polls as recently as last year showed only a minority of the population in Crimea supporting a union with Russia, and a poll this spring showed the same for the residents of eastern Ukraine. Furthermore, the Russian annexation constitutes a direct violation of both the Ukrainian constitution and the 1994 Budapest Treaty signed by Russia, Ukraine, and the five permanent members of the UN Security Council.It is important to recognize, however, that Crimea was not the first such illegal annexation in recent years. Indeed, despite the leadership Washington has taken in mobilizing international opposition to Russian expansionism, the United States has taken a very different attitude in most of these other cases.

In 1975, in violation of two unanimous UN Security Council resolutions and a landmark decision by the International Court of Justice, Morocco invaded and annexed the former Spanish colony of Western Sahara. That same year, Indonesia invaded and annexed the newly independent island nation of East Timor, also in violation of a series of UNSC resolutions. Though the United States voted in favor of these unanimous resolutions, U.S. ambassador to the United Nations Daniel Patrick Moynihan blocked the Security Council from enforcing them, later acknowledging that “the United States wished things to turn out as they did, and worked to bring this about. The Department of State desired that the United Nations prove utterly ineffective in whatever measures it undertook.”

Not only did the United States refuse to impose sanctions on Morocco or Indonesia, but U.S. military aid to these two countries actually increased following their conquests. This included direct support for their bloody counter-insurgency operations against the popular nationalist movements resisting the occupations.

Thanks to years of campaigning by the international human rights community, along with the tenacious and largely nonviolent resistance by the East Timorese, Indonesia finally rescinded its annexation and withdrew from East Timor in 1999. Unfortunately, the Obama administration, like the Bush administration before it, appears to be pushing for international recognition of Morocco’s illegal annexation of the occupied Western Sahara under that autocratic monarchy’s dubious “autonomy” proposal.

The United States has similarly offered few objections to Israel’s annexation of greater East Jerusalem following its conquest of the Palestinian-populated area in 1967. While the U.S. allowed six Security Council resolutions to pass demanding that Israel rescind its annexation and reverse other efforts to alter the city’s legal status, Washington has blocked their enforcement. During the 1990s, congressional legislation and executive actions by the Clinton administration effectively recognized the illegal Israeli takeover. More recently, a bipartisan congressional resolution in 2007, along with the 2008 and 2012 platforms of both the Republican and Democratic parties, recognizes Jerusalem as “the undivided capital of Israel.”

U.S. Secretary of State John Kerry, citing the illegality of any country acquiring “part or all of another state’s territory through coercion or force,” has quite appropriately demanded that Russia withdraw completely from Crimea.

However, he insists that it is “unrealistic” to demand the same of Israel regarding the territories it has seized by force. Indeed, both he and Vice President Joe Biden, when they were in the U.S. Senate in 2004, endorsed the late prime minister Ariel Sharon’s controversial proposal which, while withdrawing settlers from the Gaza Strip, would have Israel unilaterally and illegally annex large swathes of the West Bank to incorporate illegal Israeli settlements and surrounding areas into Israel. That same year, Kerry insisted that questions regarding Israeli compliance with international humanitarian law in the occupied West Bank should be determined not by the International Court of Justice but by domestic Israeli courts, effectively recognizing Israeli sovereignty over the conquered territory.

Our own recent history of invasions hurts U.S. credibility as well: Just days after Russian troops moved into Crimea, for example, Kerry condemned the Russia action on the grounds that “You just don’t invade another country on phony pretext in order to assert your interests,” correctly noting that the Russian actions constituted a “direct, overt violation of international law.” Unfortunately, this gave the Russians an opening to point out that Kerry, along with Biden, had been an outspoken supporter of the illegal 2003 U.S. invasion of Iraq under the false pretext that Iraq still had “weapons of mass destruction.”

Though Obama opposed the invasion of Iraq, he has been put on the defensive by the hypocrisy of his secretary of state and vice president. In a speech in Brussels on March 27, he insisted that the U.S. invasion of Iraq was not as bad as the Russian invasion of Crimea since “We did not claim or annex Iraq’s territory.” While this is indeed an important distinction, it overlooks the fact that the U.S. invasion of Iraq has been responsible for the deaths of hundreds of thousands of people, while the Russian annexation of Crimea resulted in essentially no fatalities and the death toll from eastern Ukraine has been limited to 3,000 people—with most of the civilian casualties a result of shelling and air strikes by the U.S.-backed Ukrainian military. The human costs in eastern Ukraine are tremendous, but they pale in comparison to Iraq, where the United States is again sending airstrikes to deal with the ongoing fallout of its disastrous invasion.

Obama also tried to differentiate between the two invasions by claiming that “America sought to work within the international system,” seemingly implying that if Russian President Vladimir Putin, like U.S. President George W. Bush, had sought UN approval, failed, and then invaded anyway, it would have somehow been okay.

Obama’s insistence that, unlike Russia, “We did not grab [Iraq’s] resources for our own gain” is questionable, given the generous oil production sharing agreements imposed on the Iraqis during the U.S. occupation. Similarly, even if one accepts his claim that the U.S. “left Iraq to its people in a fully sovereign Iraqi state that can make decisions about its own future,” Bush-era documents have made clear that this was certainly not the intention of the invasion’s architects. And recent developments put this into further question.

It is critical that the right-wing narrative about President Obama’s alleged “weakness” towards Russia be challenged. In doing so, however, it is also important to stress that Washington’s major limitation is not a lack of military leadership, but a lack of moral leadership.

Stephen Zunes is a professor of Politics and International Studies at the University of San Francisco.