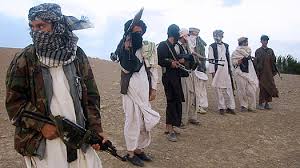 If you watch the video of the Taliban handing off Bowe Bergdahl to American troops, you may have been surprised to see a couple of them shaking hands with the Americans and even waving goodbye. In fact they wanted more: to schmooze. In the New York Times, Matthew Rosenberg reports:

When Sergeant Bergdahl “saw his American helicopter, he was very happy and wanted to rush toward them,” one Taliban member said in the video.

But once on the ground, the Americans, to the dismay of the Taliban, proved uninterested in any pomp. They rushed through the encounter and did not stop to talk or exchange polite greetings, as is customary in Afghanistan, even during hostage releases. The narrator complained that they had managed to shake hands with only two of the Americans.

… “We wanted to convey some messages to them via the interpreter, but they didn’t spend much time with us,” said the Taliban fighter, speculating that perhaps the Americans were too frightened to linger. “They even didn’t let us shake hands with the soldier and say goodbye, and they behaved in a very simple way,” the fighter said.

Oh, right, you just wanted to tell Bergdahl, “No hard feelings.” Earth to Taliban: the only way that would have meant anything to Bergdahl was if he had developed Stockholm Syndrome (which, through no fault of his own, he may very well have). The author (with no byline) of a Business Insider blog post expanded on the exchange.

Indeed, the entire handoff is rather short. While the video released by the Taliban is more than 17 minutes long, the actual exchange of Bergdahl from Taliban to Army Special Forces custody only takes about one minute.

… one American soldier at least makes an attempt at a pleasant greeting often used in Afghanistan, by placing his hand over his heart (the gesture is often accompanied with saying “As-salamu alaykum,” or “Peace be upon you.”). Unfortunately, he used his left hand, which is a big no-no in that part of the world.

Elaborating on Rosenberg writing about the Taliban fighter “speculating that perhaps the Americans were too frightened to linger,” Business Insider reports:

Still, you can’t really blame the Americans for wanting to get out of there quick, especially with Taliban fighters standing on a hillside overlooking the helicopter armed with RPG’s.

More to the point it’s indicative of the behavior of Americans in Afghanistan in general. Rosenberg again.

Those kinds of complaints about American behavior are common across Afghan society, not just among those who want the United States military to leave. It has been a grating source of tension as the years of American presence here have stretched on.

God forbid that we should ever let the ugly American cliché become obsolete.