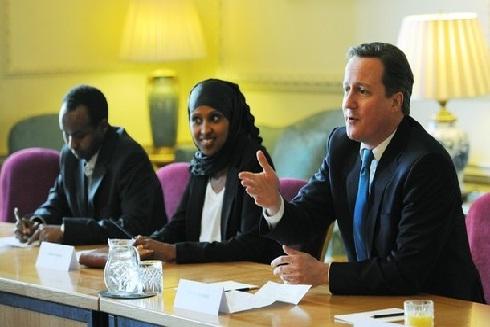 British Prime Minister David Cameron (R) takes part in a round table discussion at 10 Downing Street in London, as he meets members of the London Somali community. Picture courtesy of Reuters.

UK Takes the Lead in Somalia

The international community should accept that a centralized state structure cannot be reconstituted within the borders of what used to be Somalia.
By Francis Njubi Nesbitt | February 29, 2012 British Prime Minister David Cameron (R) takes part in a round table discussion at 10 Downing Street in London, as he meets members of the London Somali community. Picture courtesy of Reuters.

The much-ballyhooed conference on Somalia hosted by UK Prime Minister David Cameron on February 23 was long on grandstanding but short on new substance. The meeting was clearly more about crowning a new leader (Britain) and celebrating the limited military successes against Islamist militants than about building a foundation for peace.

Conference attendees included Secretary of State Hillary Clinton, UN Secretary General Ban Ki-Moon, Presidents Mwai Kibaki of Kenya and Meles Zenawi of Ethiopia, and other dignitaries from 40 countries. Also represented were regional organizations such as the African Union, the Intergovernmental Authority on Development, the Organization of Islamic Cooperation, and the European Union. Notable newcomers to the Somalia scene included Turkey and the United Arab Emirates

According to Cameron, the purpose of the conference was to build on the momentum gained by the African Union Mission in Somalia (AMISOM), which has retaken most of Mogadishu from the al-Qaeda affiliated al-Shabaab militants on behalf of the Transitional Federal Government. Britain has recently taken the lead in the international campaign to stabilize Somalia. On February 1, Britain announced that it had appointed the first envoy to Somalia in 21 years. Foreign Secretary William Hague said on a visit to Somalia on February 2 that dozens of British citizens were attending al-Shabaab terrorist training camps in Somalia. Hague said it was only a matter of time before the militants strike in Britain. He said that the objective of the London conference was to “strengthen counter-terrorism cooperation to make it easier for countries in the region to disrupt terrorist networks” and restrict their movements and financing.

The most important outcome actually came the day before the conference when the UN Security Council expanded the mandate of the African Union mission in Somalia (AMISOM). UNSC Resolution 2036, which the UK proposed, raised AMISOM’s troop strength to 17, 731 and authorized its troops to pursue rebels outside the capital city of Mogadishu. The resolution authorized AMISOM to “take all necessary means to reduce the threat posed by Shabaab and other armed opposition groups in order to establish conditions for effective and legitimate governance across Somalia.” It also doubled AMISOM’s budget from $250 million to $550 million. The UN funds the mission with most of the support coming from the EU.

This expanded mandate means that AMISOM has essentially moved from peacekeeping to peace enforcement. Its initial peacekeeping mandate limited AMISOM to self-defense and the defense of the Transition Federal Government’s offices in a small part of the capital, Mogadishu. This meant that its troops were not allowed to take offensive action unless directly attacked. The limited mandate and lack of troops and resources limited its effectiveness. Its designation as a peacekeeping mission was also problematic in the sense that there was no peace to keep. The current mandate, therefore, makes more sense. The question is, however, whether the expansion will include enablers such as attack helicopters that would extend the reach of AMISOM outside the capital city.

Most of the additional troops come from the re-hatting of Kenyan troops who invaded southern Somalia in October after a rash of kidnappings of tourists at coastal resorts near the Kenya-Somalia border. The goal was to create a buffer zone along the border to stop frequent cross-border incursions by Somali militants. The problem, however, was that Kenya lacks the resources to fund an extended occupation. The re-hatting, therefore, lifted a heavy burden. Henceforth, AMISOM’s funders at the UN and the EU will pay for the costs of the occupation, including the Kenyan troops’ salaries.

Cameron also highlighted the issue of piracy. He called on the international community to maintain pressure on Somali pirates by stepping up maritime security patrols and prosecuting suspects. He praised Tanzania, Seychelles, and Mauritius for agreeing to imprison pirates arrested by western militaries in the Indian Ocean. Cameron noted that the United Arab Emirates has provided $15 million to strengthen the Seychelles Coast Guard. The UK and Netherlands are also establishing a center for coordinating intelligence.

Although the conference reaffirmed the international community’s determination to fight piracy on the Indian Ocean, no new ideas or policies were presented. The discussion centered instead around strengthening the awesome global armada that has been parked off Somalia since 2008. The problem with this approach is that the shock-and-awe tactics have failed to significantly reduce acts of piracy. The UN estimates, for instance, that the pirates in Somalia are still holding over 170 hostages. In 2011, pirates captured over 20 ships and attacked over 200. Incidents of piracy attributed to Somalis increased from 219 in 2010 to 237 in 2011, but the number of successful hijackings decreased from 49 to 28. Meanwhile a report by the One Earth Foundation estimated that Somali piracy cost the world between $6.6 and $6.9 billion in 2011 alone.

Predictably, there was no mention of the other pirates: western trawlers who loot fish stocks and dump toxic waste in Somalia’s waters. A recent report by the Global Policy Forum shows, for instance, that the looting of fish stocks and dumping of toxic waste are major threats to the environment. The report argues that the well-armed foreign fishing vessels earn millions of dollars a year through sales of looted fish stocks “at the expense of local, small-scale Somali fishermen who find far fewer fish in their waters.” These foreign vessels are also accused of attacking Somali fishermen and destroying their nets and equipment. Meanwhile, reports indicate that European and Asian companies continue to dump toxic waste such as “electronic products, medical wastes, nuclear and chemical wasters and other toxic substances” in Somalia waters.

Despite the overwhelming evidence presented to the UN Security Council and available to conference attendees, these serious violations of the rights of ordinary Somalis went unmentioned. These western and Asian pirates are operating criminal enterprises under the noses of the international anti-piracy armada. The crimes committed by these companies are as serious as those committed by the Somali pirates. They are impacting the lives of coastal populations by restricting access to critical sources of protein and income besides destroying the environment. This is true not only for Somalia but also for neighboring countries like Kenya, Yemen, Tanzania, and Seychelles.

On the political front, conference attendees insisted that the Transitional Federal Government’s tenure would not be extended beyond August 2012. The problem is that the current transitional arrangement will be replaced by another transitional arrangement with the same mandate. The TFG was created in 2004 with a mandate to produce a new constitution and organize elections. The mandate was extended several times but the weak and fractured administration could not get its act together. Reports of clan feuds, corruption, fistfights in an overstaffed cabinet, and staggering incompetence did little to inspire confidence. In the eights years of its existence, the TFG barely managed to control two blocks of Mogadishu even with the support of thousands of African Union troops. This was a “government” in name only.

According to Secretary of State Hillary Clinton: “the international community has been clear that we do not support another extension. It is time to move forward to a more stable and unified era for the Somali people.” This, however, is easier said than done. It seems the West is still tied to the concept of a unified Somalia with a strong centralized state based Mogadishu. This notion, however, is a pipe dream. The Somali people have a long history of decentralized administration based on the traditional clan structure run by councils of elders and Islam. The idea that a centralized government based on the Western model can be transplanted to Somalia is unrealistic at best.

Contrary to the popular discourse about chaos in Somalia, the fact of the matter is that large parts of the north are quite stable. The breakaway province of Somaliland, for instance, has developed a stable system based its unified clan structure. At the London conference on February 23, Somaliland’s President Ahmed Silanyo said that peace “will not be achieved by the top-down imposition of a re-created centralized state.” Somaliland seceded from Somalia soon after the collapse of the Siad Barre regime in 1991. Since then, the breakaway province has created state institutions, a security force and a monetary system. It has held several elections and also worked to reestablish schools, colleges and universities with the help of returning residents from the diaspora. Somaliland has done all this despite the fact that the international community does not recognize it as an independent state and thus it receives no aid or development support from donors.

The neighboring semi-autonomous province of Puntland is also charting an independent path. Though not as successful as Somaliland, Puntland is also using local traditions and clan structures to stabilize its territory. A workable solution, therefore, does not require a unitary or centralized state structure. The emerging buffer zones on the Kenya and Ethiopia borders are also moving in the same direction. Thus the evolving trend is clearly toward decentralization. The only realistic solution is for the international community to accept that a centralized state structure cannot be reconstituted within the borders of what used to be Somalia.

Francis Njubi NesbittForeign Policy in Focus contributor Francis Njubi Nesbitt is a professor of Africana Studies at San Diego State University. He is the author of Race for Sanctions and has published numerous book chapters and articles in academic journals.