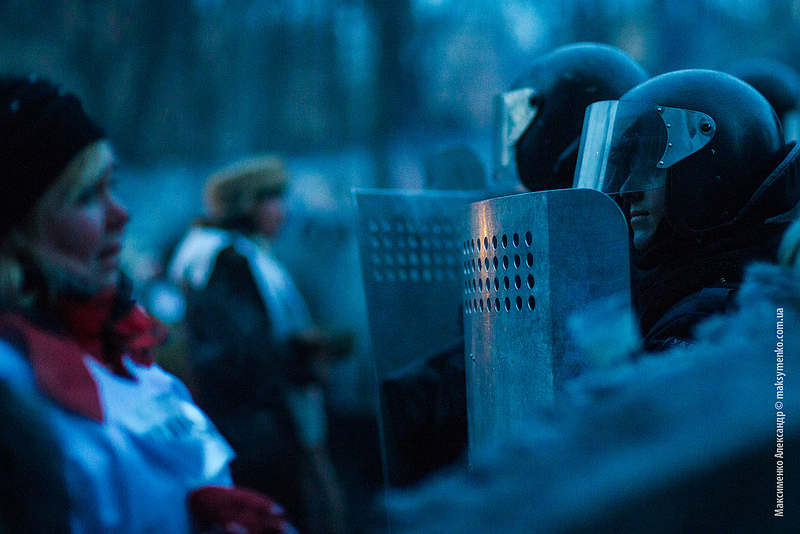 The fall of Yanukovych, welcomed by virtually everyone in Ukraine including his own party, means that Ukraine is out of the frying pan. Now the challenge facing Ukrainians — and the country’s neighbors — is to prevent a tumble into the fire. (Photo: Sasha Maksymenko / Flickr)

Ukraine: Out of the Frying Pan

The very fact that Ukrainian protesters can oust their leader and plunge their country into political uncertainty testifies to the diminished influence of the major international players trying to control outcomes in Kiev.
By John Feffer | February 26, 2014

Over the weekend, the Maidan movement in Kiev rejected the agreement reached between Yanukovych and opposition leaders, which would have created a national unity government and prepared for new elections within the year. Like their distant cousins in Egypt and Syria, protestors wanted nothing to do with their putative leader and demanded his immediate resignation. They disregarded the blunt advice of EU mediator (and Polish foreign minister) Radoslaw Sikorski, who warned, “If you don’t support this [compromise] you will have martial law, the army. You’ll all be dead.” When Yanukovych left the capital on Friday night for his political base in the eastern part of the country, they sensed their opportunity and effectively seized control of the city.

Interim leader Oleksandr Turchynov and the newly empowered parliament immediately went to work. It voted to release Yulia Tymoshenko from prison — where the former prime minister and Orange revolutionary was serving a seven-year sentence for alleged corruption. The MPs also fired the interior minister responsible for the security forces, which opened fire on protestors last week, killing dozens. The hated riot police were disbanded.

The fall of Yanukovych, welcomed by virtually everyone in Ukraine including his own party, means that Ukraine is out of the frying pan. Now the challenge facing Ukrainians — and the country’s neighbors — is to prevent a tumble into the fire.

The most immediate problem is achieving a measure of political stability. It hasn’t been easy to form a new government in Kiev. But other signs are good. There have been no revenge killings. There are no reports of looting. Police and armed protestors are sharing responsibility for keeping order in the major cities. Thousands of people toured — as opposed to trashed — Yanukovych’s opulent presidential palace, and they not only didn’t touch anything but even stayed off the grass.

The opposition is far from unified. But Tymoshenko, a divisive figure now that she’s once again out of prison, has deferred to Arseniy Yatsenyuk, the leader of the Fatherland party that she founded.  Other oppositionists, like former boxer Vitali Klitschko, are also angling for the presidency. No one has threatened a Ceausescu scenario — rush to judgment followed by summary execution — for the AWOL Yanukovych. Rather, the interim leadership is only talking legal recourse, even broaching the possibility of involving the International Criminal Court.

The second pressing challenge is the Ukrainian economy. The country’s economic tailspin precipitated the current crisis, as the country was caught between twin bailouts, one from Moscow and the other from Brussels. After a feint towards Europe, Yanukovych eventually took $15 billion from Russia. That aid has been suspended. Now the EU, the IMF, and the United States are dreaming up some kind of package for Ukraine. In the past IMF austerity measures, which included wage freezes and utility hikes, were unpopular, to say the least. But Ukraine owes $73 billion in foreign debt, and $12 billion of that comes due this year. It’s the IMF’s job to dispense unpleasant medicine, and so far neither Brussels nor Washington have offered much to sweeten the pill.

The nightmare scenario, however, is the disintegration of the country. Ukraine is divided between an eastern part populated by a large number of Russian speakers and a European-leaning western part. Then there’s the peninsula of Crimea, in the Black Sea, which is 60-percent Russian-speaking and where Moscow docks its Black Sea fleet in a leasing arrangement good until 2042. On Sunday, 20,000 people rallied in the Crimean city of Sevastopol to elect a pro-Moscow Russian as their mayor. The whole peninsula might attempt to migrate back to Russia where it belonged for a couple centuries until 1954 when Khrushchev gifted it to Ukraine on the 300th anniversary of the Russian-Ukrainian “merger.” An unidentified Russian government official told The Financial Times last week that “if Ukraine breaks apart, it will trigger a war. They will lose Crimea first [because] we will go in and protect [it], just as we did in Georgia.”

But a military intervention by Moscow into any part of Ukraine — as it did in Georgia in 2008 — would be a serious miscalculation. In fact, the only thing that would unite Ukraine more than dislike of Yanukovych at this point would be the introduction of Russian troops. Putin is a consummate realist and is not likely to risk his other projects in the “near abroad” with such a foolhardy venture. But serious economic austerity measures or further political missteps — like the repeal of a language law that mandated the use of two official languages wherever the minority population exceeded 10 percent — could nevertheless pull at the seams of the country.

One possible way of preserving territorial integrity would be decentralization — giving more autonomy to the different regions of Ukraine. “Although federalization is seen in Kiev and western Ukraine as a step toward ultimate partition, it could in fact help hold Ukraine together,” writes Dmitri Trenin of the Carnegie Center in Moscow. “With more financial and cultural autonomy, the country’s diverse regions could more easily live and let live, and keep one another in check.” Not even Yanukovych was willing to put federalization on the agenda. But with Crimea increasingly restive and Turchynov calling separatism “a serious threat,” such options should not be dismissed out of hand.

Political instability, economic ruin, and territorial disintegration: these are the three fires that Ukraine, having leapt from Yanukovych’s frying pan, now faces. Russian intervention is a remote threat — and Putin as the devil in the Ukrainian details has been wildly overblown, as Stephen Cohen has pointed out at The Nation. At the same time, although some genuine fascists lurk among the protestors in the Maidan, they too are a distinct minority. Like Tahrir Square, the Maidan movement has represented the full range of civil society, from LGBT activists to Ukrainian nationalists.

Now we get to the role of the United States. Two very different views have emerged in the media over the last few weeks. The first is of a largely helpless observer. As things were spiraling out of control between government and opposition, Fareed Zakaria opined at CNN that there really wasn’t much that Washington could do, since military intervention was clearly off the table and economic sanctions against Yanukovych would have been counterproductive.

Ah, but then what to make of the notorious phone call between Assistant Secretary of State Victoria Nuland and the U.S. ambassador to Ukraine Geoffrey Pyatt? The call made headlines for its profanity, not its profundity, as Nuland dismissed the diplomatic efforts of the EU with a dismissive F-bomb.

But as Foreign Policy In Focus contributor Patrick Smith points out, the actual content of the phone call is actually far more interesting. “The American plot revolves around manipulating various figures in the opposition, backing the fortunes of some, keeping others from the table, and thereby inducing a friendly, post–Yanukovych government of one kind or another, compromised from its very conception,” he writes in Nuland: The Message Beneath the Vulgarity.

Now that Yanukovych is out and we aren’t privy to any more high-level State Department chats, it’s difficult to know exactly how much influence Washington continues to wield in Kiev. Certainly the United States is doing what it can to keep Russia to its non-interference pledge. Some kind of economic package is being assembled, though it’s not likely to be of Marshall Plan proportions. And no doubt Ambassador Pyatt and colleagues are backing a horse in the race for leadership (Arseniy Yatsenyuk, at least according to the aforementioned phone call).

Ukraine is part of the Great Game left over from the Cold War that the United States is still playing, a game that consists of keeping the Russians down, NATO in, and the oil and gas flowing outward. But the 21st-century chessboard is now very different. The EU is playing a major role, perhaps even the dominant one — and thus the vehemence of Nuland’s dismissal. Russia may well talk tough and spend considerable sums on reviving its military — and the Sochi Olympics elevated Moscow’s international cred a couple notches — but it is a shadow of its former Soviet self. And the United States might privately like to style itself as puppet master — or kingmaker — but these are not the “glory days” of the 1950s for the CIA and the State Department. Washington can’t even control the airing of its dirty laundry, from Wikileaks to Snowden to the Nuland phone call. The United States, particularly in these cash-strapped times, has nothing on the order of EU membership to hold as both carrot and stick over Kiev.

The very fact that Ukrainian protesters can oust their leader and plunge their country into political uncertainty testifies to the diminished influence of the major international players trying to control outcomes in Kiev. But ouster is easy compared to rebuilding an entire country the size of Ukraine. In this ongoing struggle between the street and the elite, let’s hope that the Ukrainians manage an outcome considerably better than their Egyptian, Libyan, or Syrian comrades-in-protest.