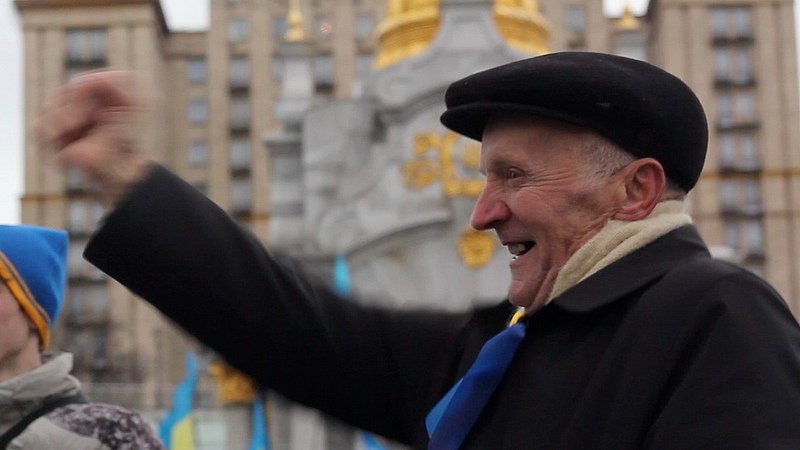 Russian officials have given one principal justification for intervening in neighboring Ukraine: their supposed responsibility to protect Ukraine's Russian-speaking population. But Ukraine's civil strife is not about language. (Photo: Oxlaey.com / Flickr)

Ukraine’s Civil Strife Is Not about Language

Political divisions in Ukraine are more accurately explained by historic preferences and influence of the local elites than by language.
By Anton Moyseyenko | March 17, 2014

Russian officials have given one principal justification for intervening in neighboring Ukraine: their supposed responsibility to protect Ukraine’s Russian-speaking population. Russian president Vladimir Putin explained as much to U.S. president Barack Obama during a much-publicized 90-minute telephone call on March 1. And, as Putin said to UN Secretary-General Ban Ki-moon, Russia will not limit itself to intervention in Crimea — it stands ready to take action in eastern Ukraine as well, “in compliance with international law.”

Such mischaracterizations — which lead English-speaking audiences to think of the Ukrainian political turmoil as a conflict based on linguistic allegiance — lead to distorted perceptions of the power struggle in the country. As a Ukrainian whose mother tongue is Russian, I have a particular interest in this issue.

Over the past few weeks, Russian authorities have railed against the “hundreds of ultra-right nationalist thugs” who have allegedly come to power in Kiev. The upper chamber of the Russian parliament has charged Ukraine’s interim government with “lustrations, liquidation of [political] parties, propaganda of neo-Nazi ideology, menace to Orthodox and historic shrines,” and “pogroms and looting [of the] civilian population.” It’s a portrayal of intense oppression, to say the least.

But what evidence do we have that minorities — or even the civilian population at large — are being repressed by the current regime? Reports from the protest encampments — of Orthodox priests assisting in makeshift hospitals in cathedrals and Ukrainian Jews sponsoring medical treatment in Israel for wounded protesters — are a far cry from the images of neo-Nazi oppression, anti-Semitism, and persecution of the Orthodox Church conjured up by the Russian parliament.

Amid all the frightening descriptions, though, one accusation in particular has struck a chord: that Ukraine’s interim government has threatened “prohibition of the Russian language.” The claim of Russia’s right to protect Russian-speaking Ukrainians provoked just the level of patriotic hysteria Russia needed to publicly legitimate its military invasion.

Three major factors account for why this particular rationale has caught on in Russia.

First of all, both the Russian and Ukrainian languages are widespread in Ukraine. So widespread, in fact, that the number of people who speak Russian — many of whom are also fully bilingual in Ukrainian — substantially exceeds the percentage of ethnic Russians in the population. So claiming to protect Russian speakers’ interests offers a comfortable pretext for seeking domination over at least half of Ukraine.

Second, one of the three politicians most visible during the anti-government protests came from the far-right Svoboda (“Freedom”) party, and members of far-right groups were reported at some of the demonstrations. These developments have caused disquiet both within and outside Ukraine. Though concerns about hyper-nationalism in Ukraine are indeed legitimate, the political influence of radical factions remains limited.

But what topped it all off was one particular piece of legislation. Among the first bills the new Ukrainian government passed was a repeal of the Law on Language Policy. This had been a declaratory instrument designed to protect minority languages, including Russian. In Russia, politicians portrayed the move as a first step towards the “prohibition of Russian.” Although Ukraine’s acting president, Oleksandr Turchynov, ultimately vetoed the bill, the damage had already been done.

The Ukrainian and Russian languages are closely related, and both have been actively used in Ukraine for centuries. In fact, the degree of cultural, economic, and political interpenetration between the Russian and Ukrainian peoples can hardly be overestimated. Some of the most famous Russian artists and authors are of Ukrainian ethnicity — including the writers Nikolai Gogol and Anton Chekhov (whom the ousted president Viktor Yanukovych once infamously and ignorantly called “a great poet.”)

For several centuries, Kiev served as a major center of the Russian Empire. Located in the north of Ukraine and known as “a mother of Russian cities,” Kiev was dominated by the Russian-speaking population of what then largely seemed to be a single nation. A similar situation persisted in the eastern and southern regions of the country. In contrast, western Ukraine had come under the control of Poland and had little exposure to Russian culture.

Turbulent years followed the breakdown of the Russian Empire. Nationalists and socialists clashed in Ukraine, with countless military factions taking part in a bitter civil war. Mikhail Bulgakov, the Kiev-born author of the famous novel The Master and Margarita, wrote of the political upheaval, “So far, one thing can be asserted: according to Kievites, they have had 18 military coups. Some of our self-proclaimed chroniclers have arrived at the number of 12; I may confidently testify that we have had 14 coups, 10 of which I have myself witnessed.”

A wave of Russification followed Ukraine’s absorption by the Soviet Union. It particularly affected the western regions of Ukraine, which were annexed in 1939 at the dawn of World War II. Upon the USSR’s collapse in 1991, the pendulum swung the other way, with many Ukrainians blaming the country’s historical troubles on Russia. The country’s past was reassessed, and a lot of battles were fought in vain over symbolism. The role of languages, the line between heroes and villains, and even proper names of streets and cities — all of these came under attack from various sides.

Have these raging controversies over language and identity affected life in Ukraine? Not too significantly. To a large extent, they have remained confined to a relatively small population of “patriots” on both sides. They pop up mainly at election time, when politicians routinely take up language causes — an example par excellence of populist rhetoric. Ascribing too much weight to these symbolic and political maneuvers would be either hopelessly naive or intellectually dishonest.

Kiev has become a prime example of the irrelevance of the “language problem.” This overwhelmingly bilingual city, where Russian is heard more often than Ukrainian in the streets, has consistently aligned with western Ukraine. Political divisions in Ukraine are more accurately explained by historic preferences and influence of the local elites than by language.

What role have language controversies played in the 2013-2014 Ukrainian uprising? The answer is clear: None at all.

Timothy Snyder, an expert on Ukraine at Yale University, may have put it best. He calls recent events in Ukraine “a classic popular revolution” against “a thief” on “a grand, perhaps even unsurpassed, scale.”

The revolution began in earnest after riot police violently dispersed students peacefully demonstrating against the government’s refusal to sign an association agreement with the EU. Police brutality sparked mass protests calling for the resignation of the president, Viktor Yanukovych. They culminated in a massacre on February 20, 2014, with over 80 people — including a Russian and a Belarusian — shot in cold blood by the Ukrainian police. In the wake of these dramatic events — when both Ukrainian and Russian speakers rose up against the kleptocratic and abusive regime — Yanukovych, accused of mass murder, fled the country and found asylum in Russia.

Although there have been clashes between supporters of the new government in Kiev and supporters of Moscow, there has been no subsequent repression directed against Ukraine’s Russian-speaking population. And as Snyder has rightly emphasized, the influence of the far-right party within the new government — the supposed neo-Nazis that the Russian government and the exiled Yanukovych claim have taken over the country — is quite limited.

Even assuming, for argument’s sake, that Ukrainian nationalists would be willing and able to pursue a radical language policy, the idea that this would involve an actual physical threat to Russian language speakers would be a huge and unwarranted leap. In reality, any government of Ukraine would likely be quite reticent on these sensitive issues — as demonstrated by the acting president’s veto of the proposed repeal of the Law on Language Policy.

All of this does beg one more question. Questions about language aside, would it not be beneficial for the ethnically Russian Crimea to either accede to Russia or gain independence? Pro-Russian forces have claimed victory in the peninsula’s disputed referendum, and Crimean lawmakers are hastening to split from the rest of Ukraine.

Here a caveat is in order: the Russian invasion is under any circumstance unlawful. Although Crimea has the status of an autonomous republic, it is also part of a unitary state, Ukraine. It is therefore not entitled to conduct its own foreign policy. So although Crimean Prime Minister Sergei Aksyonov wrote to Putin asking for help — and even invited Russia to annex the peninsula — this does not serve to authorize a military intervention in any legal sense.

One obvious matter of concern for Kiev is the potential for further destabilization of Ukraine through the existence of a rival puppet state to its south. And then there’s the issue of the slippery slope — after all, a bunch of people willing to raise a Russian flag could be found in any city of the country.

Yet there is another aspect to the Ukraine-Russia relationship that’s relevant here. For the first time since the so-called Orange Revolution, Ukraine has a chance to rebuild the corrupt and inefficient state bureaucracy, which used to be controlled by organized crime. Despite all of the difficulties that Ukraine has had to confront since then, the unprecedented rise of civil society at least provided hope for better things to come.

Now, however, not only does the country have to deal with its own political crisis, but parts of Ukraine are being taken over by a foreign government that is in many respects antithetical to the rule of law and accountability.

Ukraine hardly enjoys a spotless reputation, but Russia is notorious for rampant corruption, sham courts, and repressive law enforcement — all operating for the benefit of those accumulating immense fortunes. This is a strong claim, and yet a wide range of reputable sources unequivocally confirm it — ranging from Transparency International to the European Court of Human Rights, whose judgment in Kudeshkina v. Russia stands as a deep indictment of Russian justice.

Needless to say, people in Crimea may find themselves severely disappointed with the state that some of them are now eager to join — although that depends, of course, on their expectations.

Of course, when it comes to international law, none of Russia’s purported justifications for the invasion are legally relevant. Article 2(4) of the UN Charter proscribes the use or threat of force. The only two exceptions are actions pursuant to a UN Security Council resolution or self-defense on the basis on Article 51 of the Charter. Neither of these applies in the case of Russia’s invasion.

Nor is an “invitation” to use armed force, from the ex-president of Ukraine in this case, a legal ground for the deployment of the Russian military, as Professor Marc Weller of the University of Cambridge has noted. Thus, Russia’s declared commitment to observe international law should not offer much reassurance to the new Ukrainian government. To the contrary, recent developments have shown Putin’s understanding of his country’s international obligations to be highly opportunistic.

But legalities aside, the Russian-speaking population of Ukraine doesn’t need foreign protection. Nor are recent events in Ukraine a project of a particular ethnic or linguistic group. Instead, the revolution has been an attempt to purge the government of organized crime and corruption. While citizens of eastern Ukraine and Crimea may sympathize with Russia more than Ukraine, one can hardly speak of any acute conflict between Russian-speaking and Ukrainian-speaking citizens of the country. Russian assertions to the contrary should be treated as the cynical machinations of a government that “pacifies” its neighbors through war.

Anton Moyseyenko is a Ukrainian citizen and a native Russian speaker. He is currently studying for his Masters of Law at Cambridge.