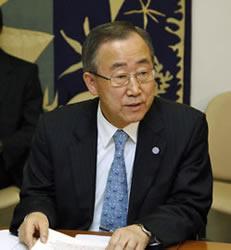 UN Again in the Crosshairs

With the Republicans back in control of the House, the United Nations is again in the hot seat.
By Ian Williams | January 28, 2011

The UN’s mythical black helicopters are back. The triumphant, reality-challenged new Republican majority in the House of Representatives imagine that they are flying in formation up the Potomac in a bid to take over the United States.

Until recently, the people who used to get so upset about the UN’s alleged plans to use their helicopters to take over America had been hunting other snarks, like the president’s birth certificate or illegal immigrants taking our jobs and going on welfare, or they’d been dressing up in 18th-century costumes at Tea Party rallies. Obama’s other sins were so absorbing that they hardly noticed when he fulfilled his predecessor’s promise and paid the UN dues on time.

But with Ileana Ros-Lehtinen (R-FL) in charge of the House Foreign Affairs Committee, a change is in the air. She has already declared her ambition to control the UN by cutting off its money supply. She said in her prepared remarks at a recent hearing on the UN that she wants “reforms first, pay later” and plans to push legislation that “conditions our contributions – our strongest leverage – on real, sweeping reform, including moving the UN regular budget to a voluntary funding basis. That way, U.S. taxpayers can pay for the UN programs and activities that advance our interests and values, and if other countries want different things to be funded, they can pay for it themselves.” In reality, most of the $6 billion she cites goes to peacekeeping operations supported and indeed proposed by the United States, and only the tiniest proportion goes to any items that the United States has opposed.

In addition to the Tea Party movement and the know-nothing movement, Ros-Lehtinen appeals to two vociferous and powerful constituencies. There’s the Cuban American lobby, which opposes the UN because Cuba is a member and because it allowed Fidel Castro, in healthier times, to come to New York to address it. Then there are the diehard Likudnik Israel supporters who think that the UN, after having partitioned Palestine and admitted Israel, is now anti-Israel. The Jerusalem Post, for example, explicitly linked payment of UN dues to the treatment of Israel.

Ros-Lehtinen actually takes positions that are often worse than those of the Israeli government. One of her donors is Irving Moskovitz, the gambling magnate who finances settlements in East Jerusalem, and she has called for the United States to defund the UN’s Palestinian refugee agency, which successive Israeli governments have appreciated because, in effect, it has shifted much of the financial burden in the Occupied Territories to the international community.

Ros-Lehtinen’s actions, in opposing multilateralism, will not likely result in a political disadvantage for the Republicans. The Obama administration pays lip service to the UN and multilateral obligations. But the failure of the Democrats after two years control of the White House and Capitol Hill to ratify crucial multilateral instruments on child soldiers, land mines, or the Law of the Sea suggests that the administration’s heart was not really in it. Certainly the chances of any of these treaties passing in the balance of this presidential term are somewhat minimal.

In the past, critics have rounded on the secretary general as the symbol of the UN. Much of the fury directed at Kofi Annan followed his admission, when backed into a corner by a BBC reporter, that the invasion of Iraq was illegal. Kofi Annan was African and radiated numinous trustworthiness, which is of course why UN opponents went to such efforts to go after him personally during the “Oil For Food” imbroglio. Significantly, Ros-Lehtinen called one of the attorneys involved in the commission investigating these allegations, Robert Appleton, as a “prosecution witness” this week in her hearing on the UN.

The latest attacks on the secretary general come from Inga Brit Ahlenius, the Swedish former head of the UN’s Office of Internal Oversight Services (OIOS). Last year, Ahlenius sent a scathing but disjointed attack on Ban Ki Moon that focused largely on his refusal to authorize the appointment of Appleton as head of investigations in her office. Ban’s official reason was that Ahlenius refused to abide by UN rules designed to ensure gender balance by submitting a shortlist that included any women. Appleton’s appearance for Ros-Lehtinen certainly lends Ban’s refusal additional retrospective legitimacy. Appleton was under suspicion of being a consistent source of leaks of half-digested and ill-substantiated inquiries of the type that OIOS was notorious for.

This week in Sweden, Ahlenius released her memoirs in what appears to be an attempt to capitalize on Capitol Hill’s revived anti-UN mood and the appearance of her would-be protégé there. However, in Sweden, where she had been previously fired from a similar job in the government, Ahlenius attracted little interest from the Swedish media, and her crusading image was almost simultaneously tarnished with a report that she had stifled whistleblowers herself.

Given the new climate of UN-phobia on Capitol Hill, some of Ahlenius’s accusations will be recycled as part of Ros-Lehtinen’s repetition of the perennial call for UN “reform.” Such calls are usually accompanied by the mantra of alleged “waste, mismanagement, and corruption” at the UN.

U.S. critics of the organization seem to blithely ignore the beam in their own eye to concentrate on the mote in the UN’s. Certainly over the years, the UN has wasted millions of dollars. But the United States has wasted tens of billions of dollars. The United States, for instance, admits that it cannot account for $10 billion dollars in surpluses from the UN Oil For Food Program. Calls for UN “reform” are tendentious. There is little doubt that the organization needs modernization, but that would involve revision of the Charter and the consent of other members. The critics’ definition of waste is money spent on projects that they disagree with, even if, for example, they are peacekeeping missions that the U.S. delegation has suggested or supported.

As this campaign revs up, Ros-Lehtinen and her colleagues should be challenged from the beginning on their premises. They do not want to reform the organization: they want to control it or, barring that, starve it to death.

Ian WilliamsIan Williams, senior analyst and long time contributor to FPIF, is a New York-based author and journalist. He is currently working on a new edition of his book, The UN For Beginners.